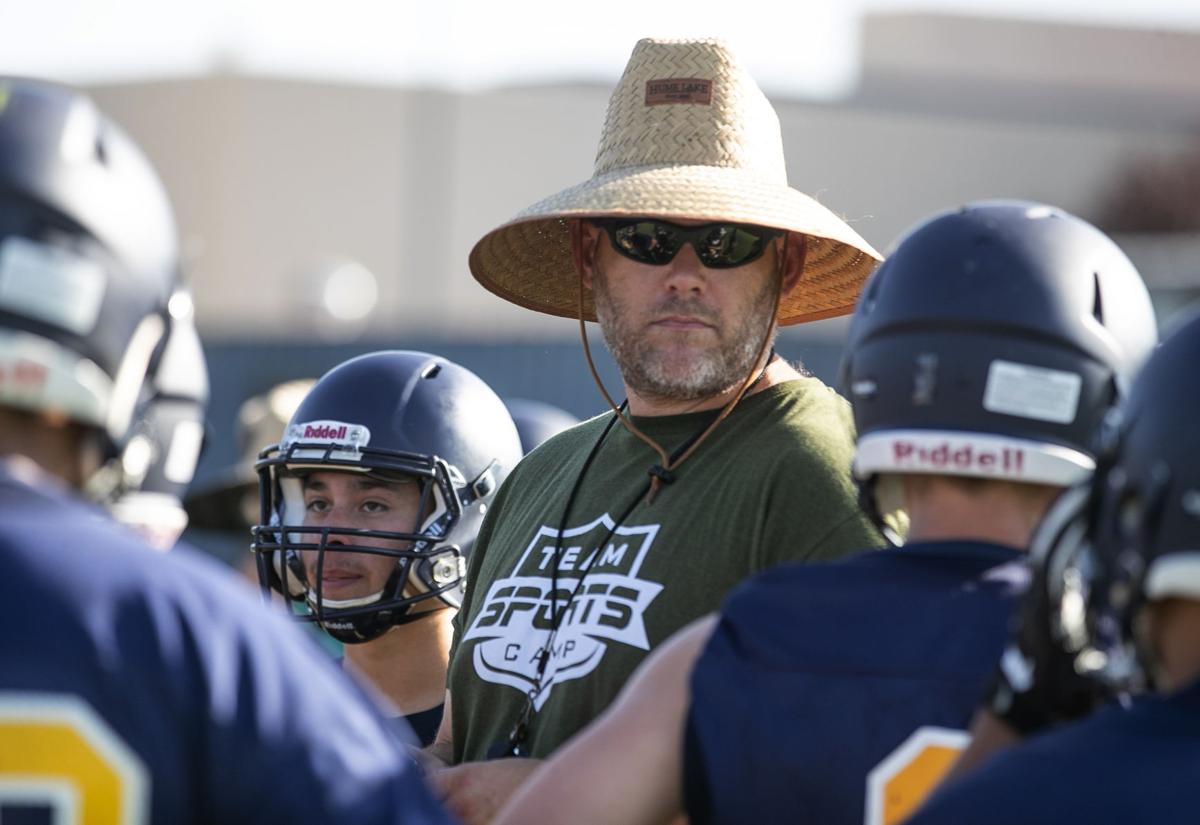 Shafter football coach Jerald Pierucci gives offensive plays to his team. Pierucci was critical of a revised plan to allow high school football to compete during the spring, calling the measure a "chaos grenade." 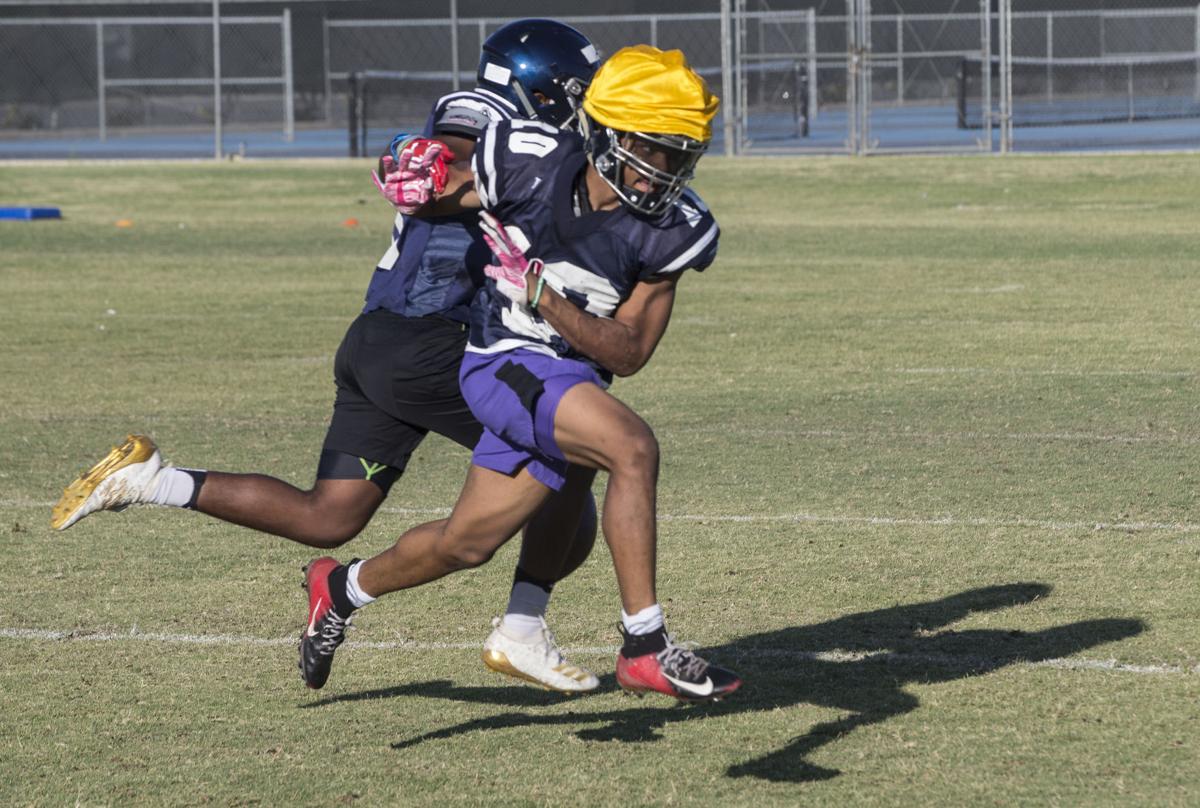 Bakersfield High School players compete during a 2019 practice. If COVID cases drop to 14 per 100,000 in Kern County, teams will be allowed to return to the practice field, following a state ruling Friday. 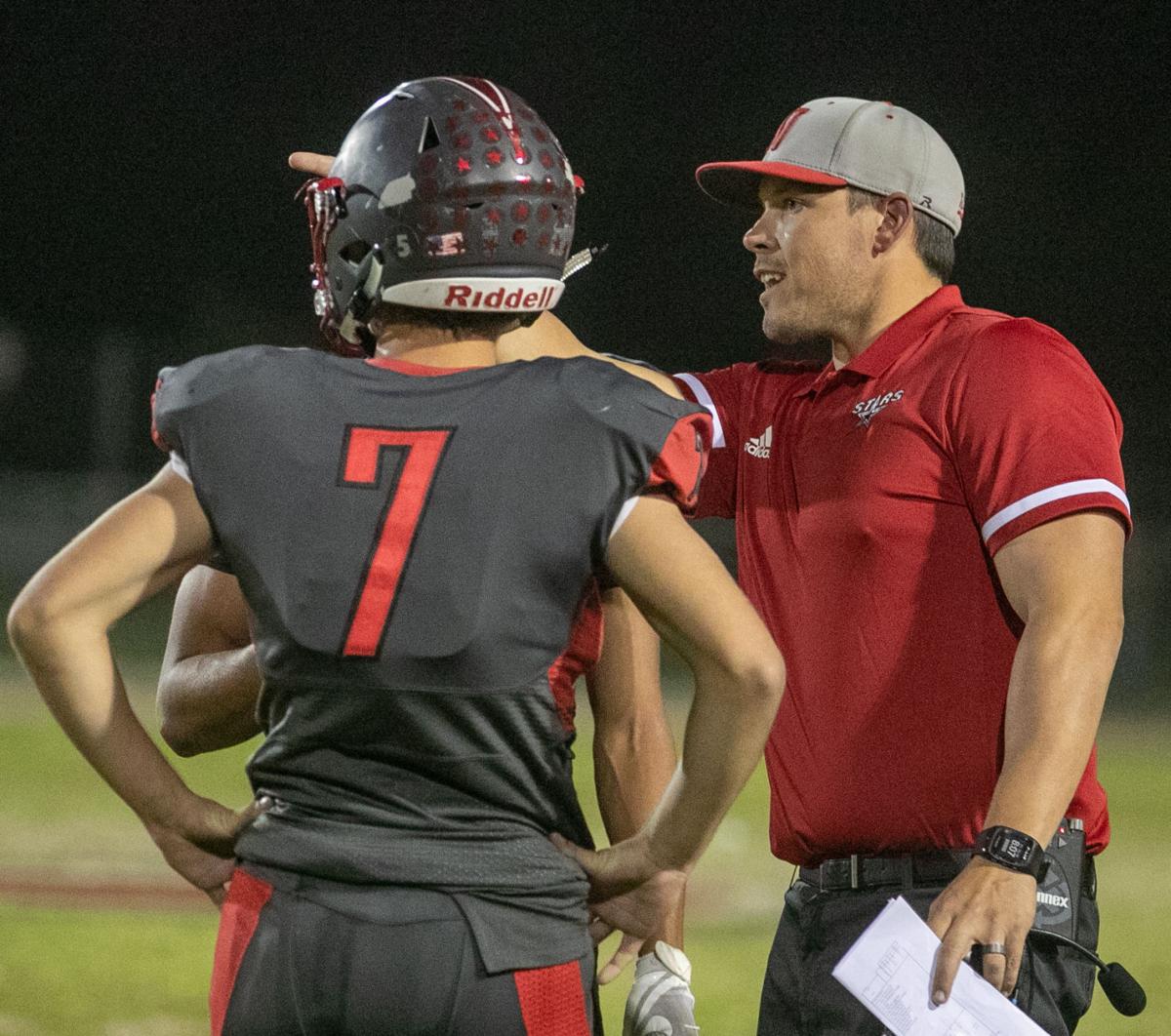 Shafter football coach Jerald Pierucci gives offensive plays to his team. Pierucci was critical of a revised plan to allow high school football to compete during the spring, calling the measure a "chaos grenade."

Bakersfield High School players compete during a 2019 practice. If COVID cases drop to 14 per 100,000 in Kern County, teams will be allowed to return to the practice field, following a state ruling Friday.

Anyone holding out hope that a high school football season could be salvaged in California received some long-awaited good news Friday morning.

During a virtual news conference, Gov. Gavin Newsom announced that outdoor youth sports would be allowed to return in counties with positive COVID-19 cases at or below 14 per 100,000 residents. Counties that meet that criteria can open their seasons as early as Feb. 26.

This was a big step for football, which has been desperately searching for a path back to live action since the fall, when the season was delayed by the ongoing pandemic.

“This is the most important development we’ve had this year,” Kern County High School Support Services Director Stan Greene said. “All the clearance that (Newsom’s) given (opens) it up for us to offer these sports.”

It was the latest bit of good news for high school sports locally, following a Wednesday announcement by the Kern High School District that numerous spring sports were on track to return shortly.

It also served as positive news to several senior athletes, who were in danger of missing out on their final high school seasons.

“It’s actually given me some hope,” said Tyrone Wilson, a senior safety, receiver and kick returner on the South High School football team. “(A football season) is something that was taken away from us. To just have a little spark of something, it’ll set something in our hearts.”

While there were a lot of positive vibes following Friday’s announcement, there are plenty of potential roadblocks that still need to be cleared.

As it stands right now, Kern County would still be unable to participate in football. Though numbers have dropped in recent weeks, the county is currently at roughly 25 positive COVID cases per 100,000 residents, well above the rate that would allow a return to action.

For some athletes, this fact seemed to get lost in Friday’s excitement, forcing coaches like Richie Bolin to taper their expectations.

Even if the county does reach the requisite numbers, serious safety concerns will persist for Shafter football coach Jerald Pierucci.

Pierucci said his players haven’t had access to the school’s weight room since the start of the pandemic and fears rushing back into action could lead to an increased injury risk. He’s also spoken with several concerned parents who have elected to take their kids out of football, creating the real possibility he might have to field a varsity roster of under 20 participants.

Pierucci also fears that a rushed spring season could create problems that carry over into the fall, as players would only have a few short months to recover before returning for preseason workouts.

“It’s a chaos grenade, I think that’s the best way of putting it,” Pierucci said. “We’re allowing a season that has been totally destroyed to now affect next year’s season. And I don’t know if that’s smart.”

Several prospective athletes will also have to juggle multiple commitments. Wilson is planning to split time between the Rebel football and track teams this spring while working a part-time job.

But after all hope seemed lost, Wilson said he and his classmates will take any opportunity to finish out their high school careers.

“For us seniors, this would be really big,” he said. “This is something we all want to have in our lives.”

Bolin said getting his seniors back on the field was his primary motivation in moving forward. And despite his vocal concerns, Pierucci also said that if proper safety measures are put in place, he would attempt to field a team “for my seniors, the ones who’ve stuck it out and continued training and gotten good grades.”

If COVID cases drop to a sufficient degree, Greene and the school district would move forward with plans to start a season, hoping to have everything in motion by the next scheduled board of trustees meeting on March 1.

Greene said a big obstacle to clear would be establishing coronavirus testing protocols for players and coaches. During his Friday news conference, Newsom said the state would assist schools in establishing such protocols.

If all measures fall into place, Greene expects the sports calendar in Kern County will start to fill up in the coming weeks.

“We want our student-athletes to be able to participate,” he said. “That is going to be a huge challenge for us, but it’s not going to stop us.”

The ruling would allow for boys and girls water polo to return to both Garces Memorial and Bakersfield Christian high schools this spring. Water polo, which generally competes in the fall, would require the same positive COVID case rate as football.

Greene also said the board is working on a plan to allow for boys and girls soccer teams to play this spring. Current guidelines require soccer to be in the second-least restrictive orange tier to compete.

Newsom indicated that the state was working on a plan that would allow indoor spring sports to return. Currently, basketball, wrestling and competitive cheerleading could only compete if the state were in yellow, the least restrictive COVID tier.