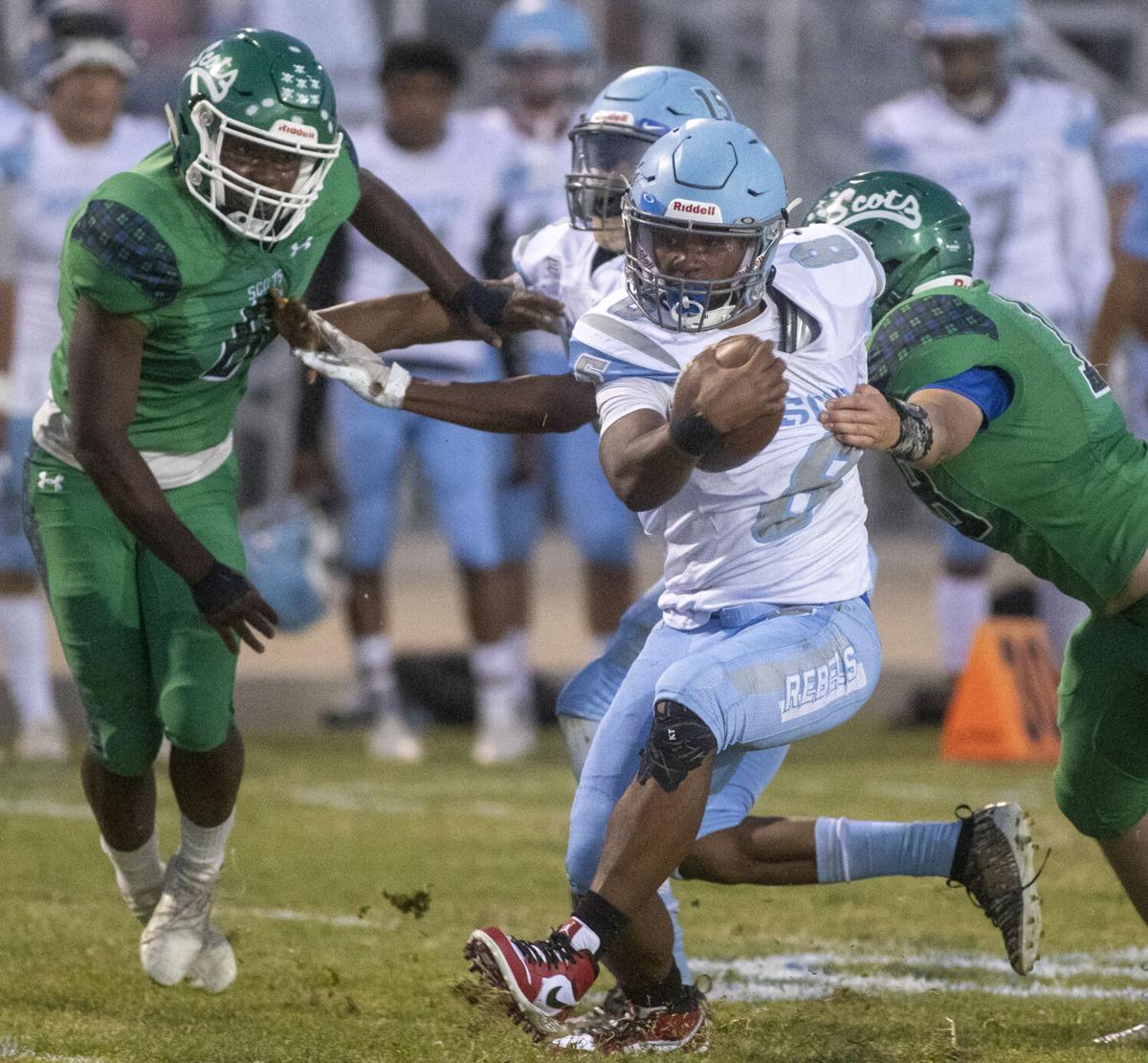 As he did for much of the night, King Ellis slides away from a Highland defender last week. The South senior quarterback ran for 259 yards and six touchdowns and also threw for a score in a 54-30 win. 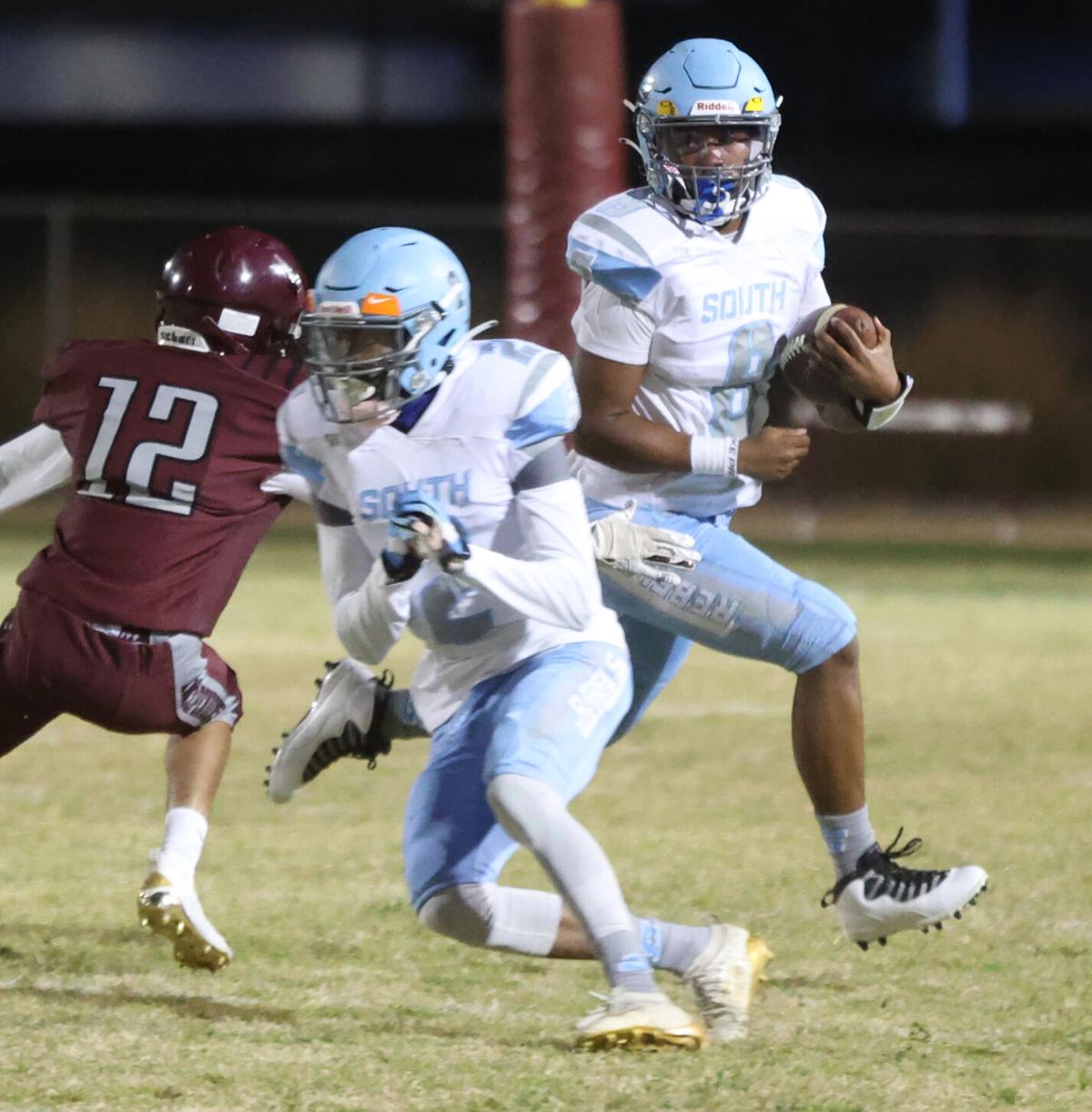 South quarterback King Ellis, right, looks for an opening against the Independence defense during a March 26 game.

As he did for much of the night, King Ellis slides away from a Highland defender last week. The South senior quarterback ran for 259 yards and six touchdowns and also threw for a score in a 54-30 win.

South quarterback King Ellis, right, looks for an opening against the Independence defense during a March 26 game.

It took awhile for King Ellis to feel truly comfortable on the high school football field.

An explosive athlete with breakaway speed, Ellis got varsity reps as a sophomore at Ridgeview, where he rushed for 98 yards and three touchdowns during the 2018 season.

Though happy to contribute, Ellis admits the moment got too big for him at times. Fearing he'd let down his older teammates, he says he often felt a tension that prevented him from producing at a satisfactory level.

"I was nervous my first games at varsity," he said. "I didn't want to make the seniors disappointed or mad at me if I messed up. And that wasn't good. It wasn't the season I wanted to have."

After transferring to South High School before his junior season, coach Cary Mills tried to utilize Ellis' speed at running back and progress was slow, as he rushed for just 20 yards in the Rebels' first three games in 2019.

Even though he found his footing in game four, gaining 89 yards with a touchdown in a win over Fresno, Ellis approached his coach afterwards, believing he could be of better use elsewhere.

"One day at practice, he came up and said 'You know coach, I do play quarterback,'" Mills said.

Hoping to give his team a spark, Mills moved Ellis under center after a bye week. The decision proved beneficial, though it took time for Ellis to maximize his abilities.

Paired with 1,600-yard rusher Daniel Lomax, Ellis ran for 533 yards and five touchdowns in seven games at quarterback as a junior, solidifying himself as the starter going into his senior year.

Hopes were high heading into the spring, but progress was slow. South scored just 17 points in each of its first two games, and Ellis says tension was high in the locker room after the offense was shutout in the second half of a 20-17 season-opening loss to Independence.

Attempting to play power football in a modified Wing-T, Mills felt he needed to adjust his offense to better suit his personnel. Originally playing in a lot of two tight end sets, he replaced one tight end with a receiver on the outside to create more space for Ellis and tailbacks DeeShawn Brown and Tyrone Wilson.

"The first game, they used to blitz like, the whole front and blitz the A-gap, so it was kind of hard to run," Ellis said. "But now we've got it spread out to where our line doesn't have to stress. It was easier to read the field because the linebackers weren't always so close."

It's hard to imagine anyone reading the field better than Ellis did against Highland last Friday, where he had arguably the best game is South history.

After averaging nearly 39 yards per carry against West a week prior, Ellis carried the ball 28 times for 259 yards and scored a school-record six touchdowns in a 54-30 win.

When things click so well on the ground, it can be easy to forget that Ellis can also throw the ball, a fact that seemed lost on the Scots.

With a win in hand, Ellis added to his dominant night with a seventh touchdown, this one through the air. Rolling right, with the entire Highland defense keying in on him, he stepped back and launched a pass to Marcell Avery, who was all by himself at the 5-yard line and strolled in for a 37-yard touchdown to put South over the 50-point mark.

Ellis, who completed just 40 percent of his passes a season ago, still isn't an elite passer, and when running as he has in recent weeks, the need to make plays through the air isn't always necessary.

Despite his preference to run first, Mills says Ellis has attempted to polish up the passing aspect of his game, which has helped make him even more dangerous on nights where that didn't even seem possible.

"All year, King's been telling (our receivers) 'Just go, eventually I'll throw the ball,'" Mills said. "He can be running around like that for seven seconds, then boom, kids just lose track of where our guys are."

Ellis' final opportunity to play quarterback may come Friday, when the Rebels (3-1) close the regular season with a road game against 2-2 North.

Having already secured an offer from Bethel College in Kansas, Ellis says he's also had talks with coaches from Fresno State, UNLV and Bakersfield College. The consensus amongst these coaches seems to be that his size — 5-foot-10, 172 pounds — and speed make him better suited to be a college cornerback, an assessment he sounds OK with.

"I'll play whatever position they want me to play," he said. "I just want to play at the next level."

But he also hopes to leave the prep level on a high note. After starting his varsity career as a timid underclassmen worried about upsetting older players, Ellis has become the unquestioned leader both on the field and in the locker room at South, a role he clearly relishes.

"I'm very comfortable being the voice in the locker room, having things run through me," he said. "That's all I wanted to be in high school. The leader of the team helping everyone succeed."

Correction: A previous version of this story stated that tomorrow's game kicks off at 7:30 p.m.