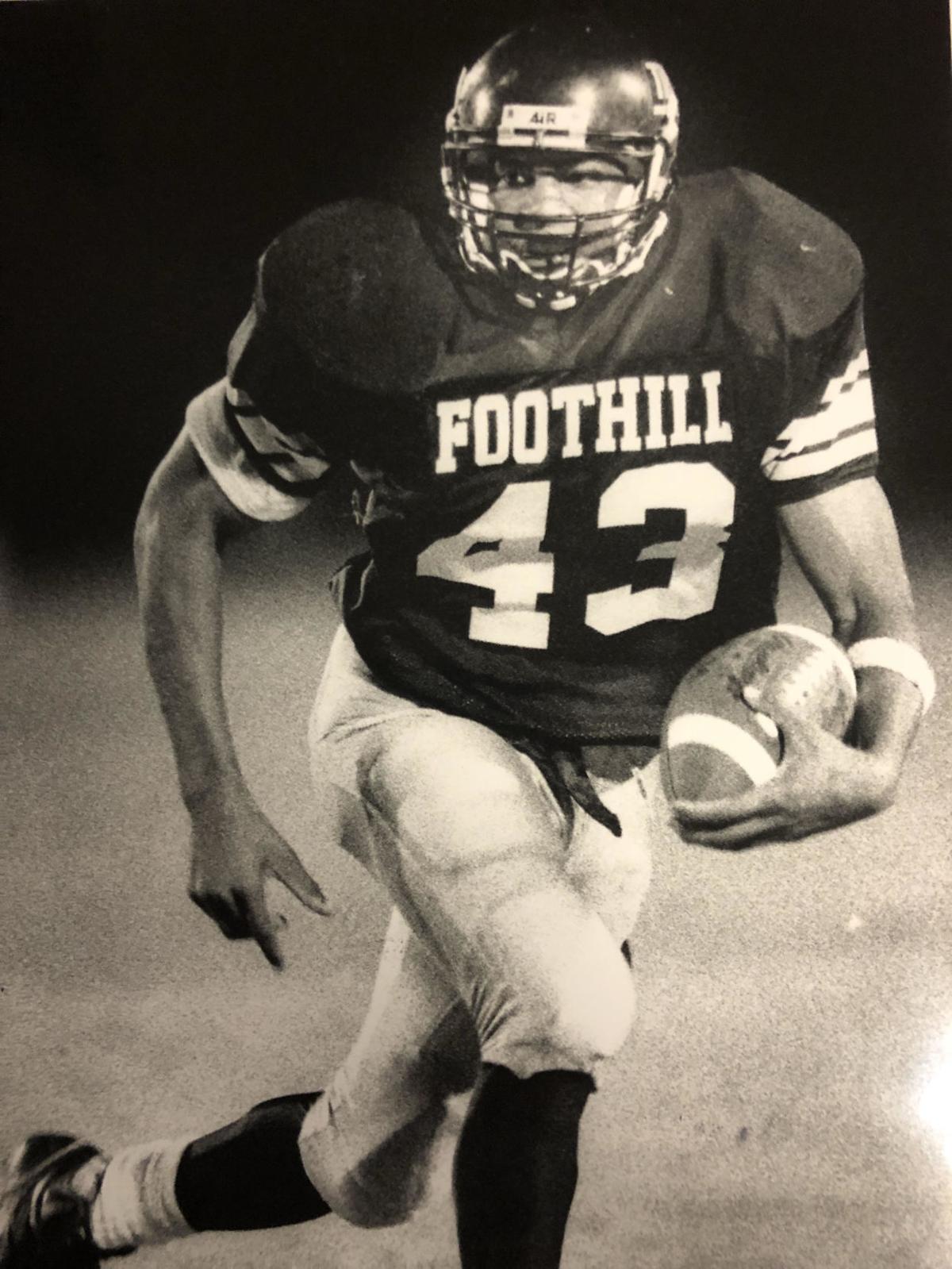 Former Foothill running back Rashaan Shehee. He would go on to play at the University of Washington and briefly in the NFL. 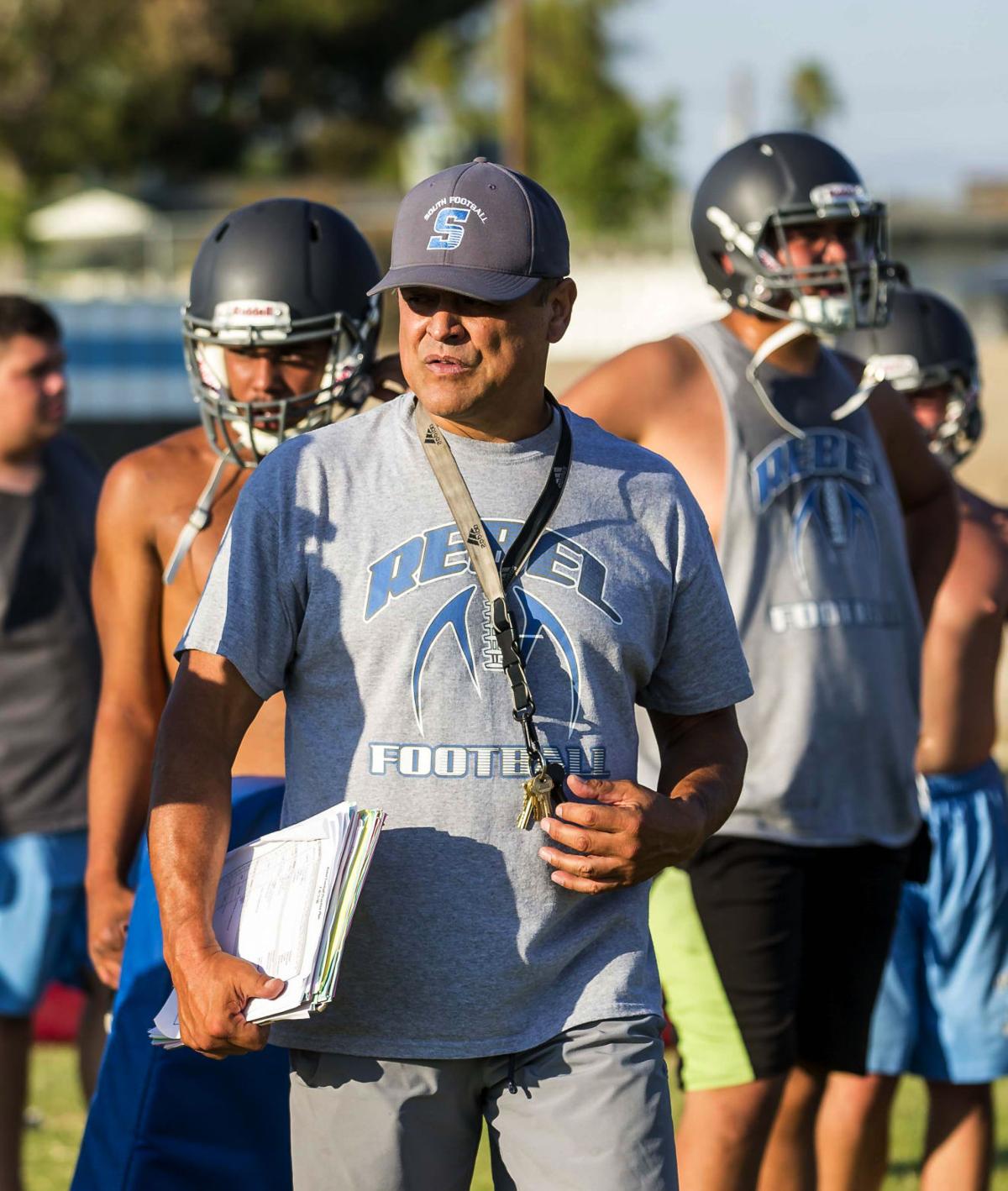 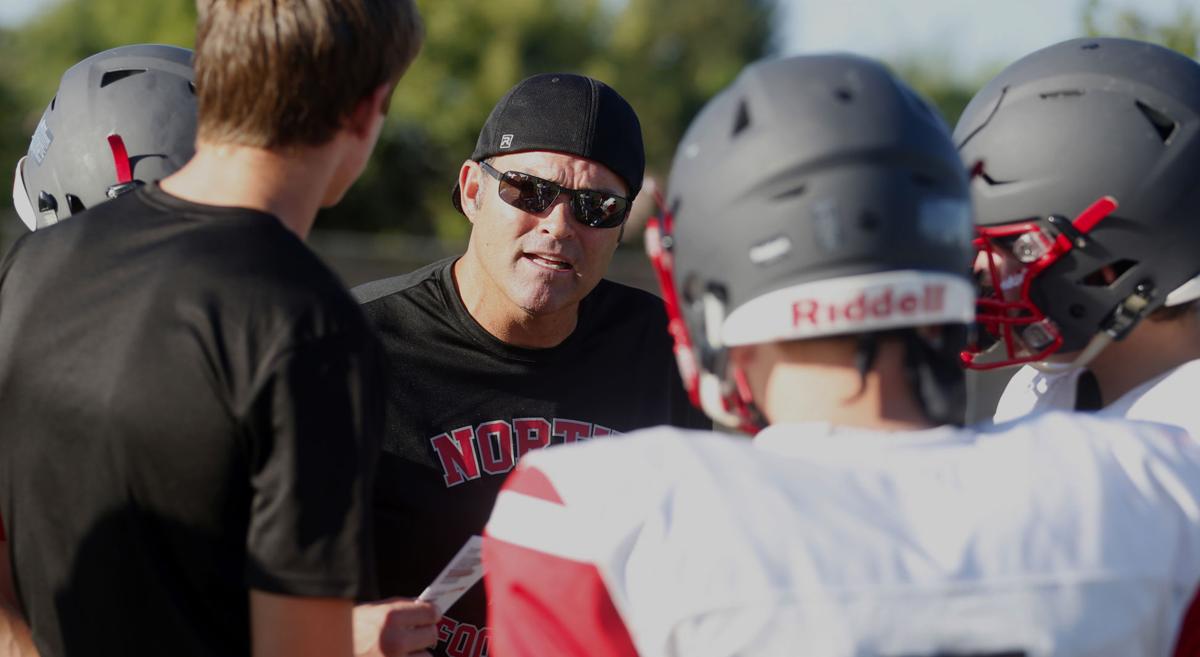 North Stars head coach Norm Brown huddles up with his players during a preseason practice. 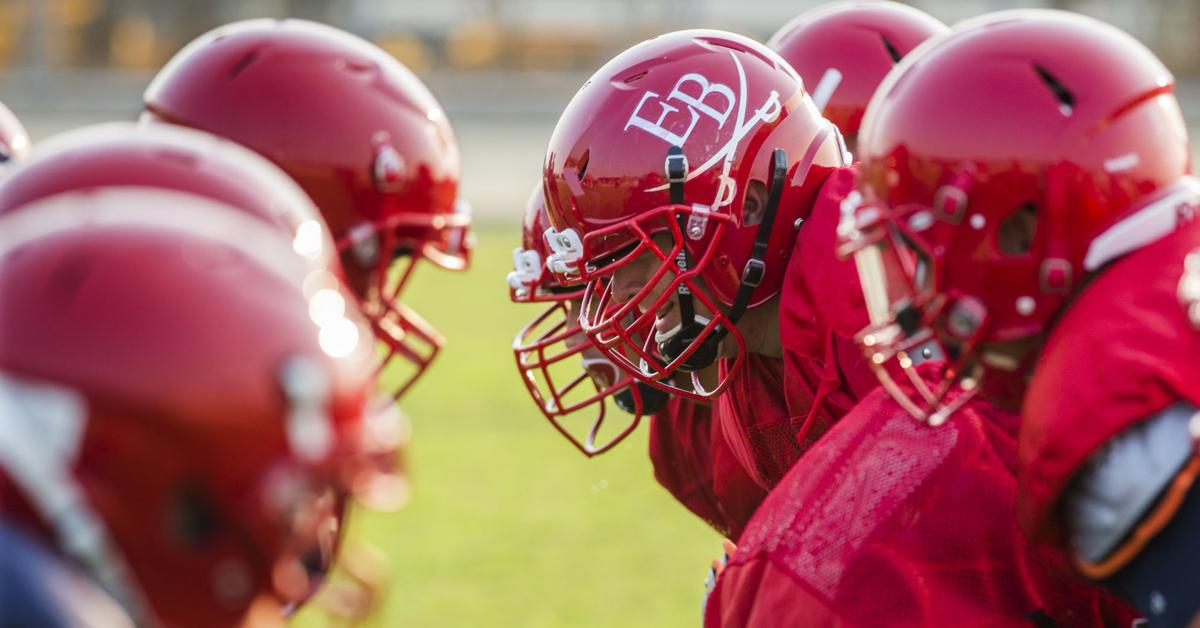 Lineman Julian Cueto, center, is the leader of the Blade defense. 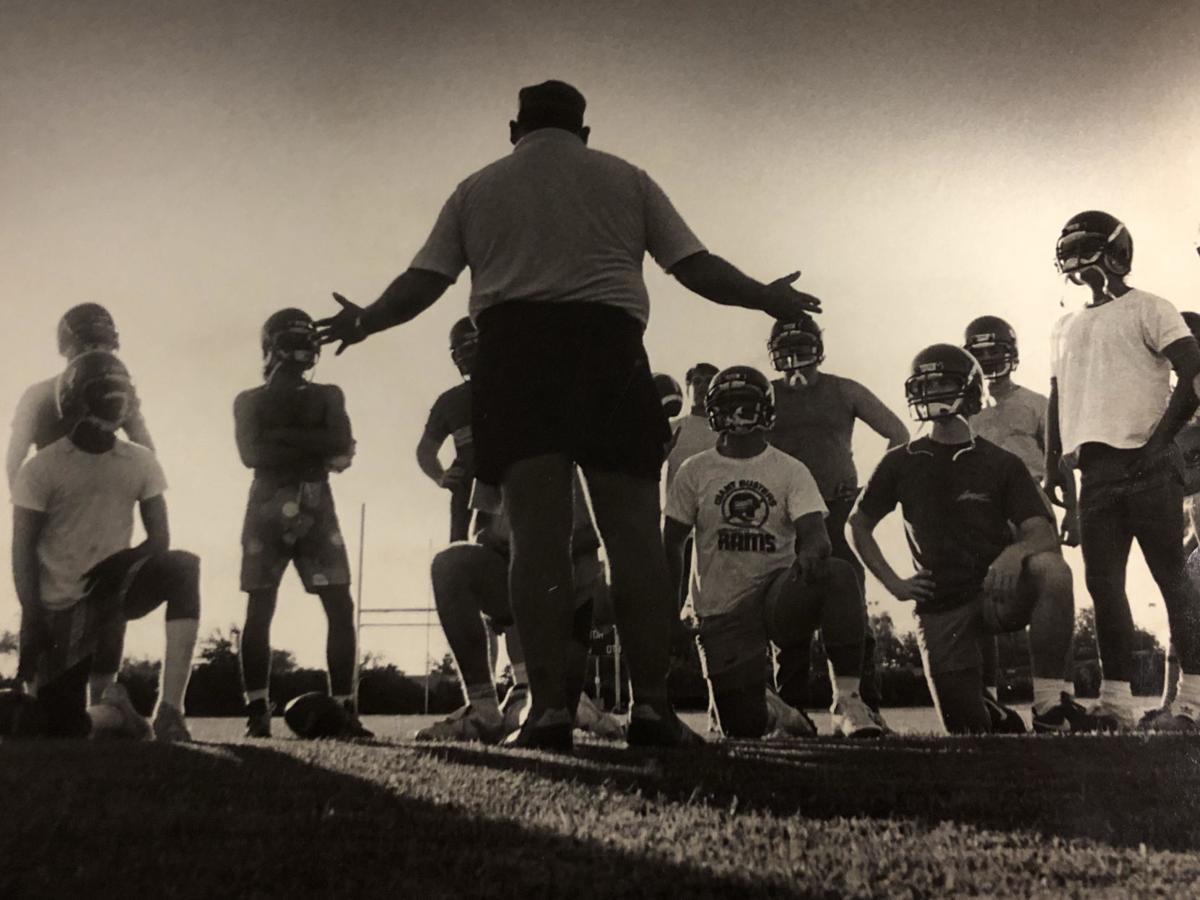 Former Foothill running back Rashaan Shehee. He would go on to play at the University of Washington and briefly in the NFL.

North Stars head coach Norm Brown huddles up with his players during a preseason practice.

Lineman Julian Cueto, center, is the leader of the Blade defense.

For decades, the east side of Bakersfield had some of the top football talent in Kern County.

One of the greatest running backs in county history came out of Foothill, as a matter of fact. Rashaan Shehee blew away and ran over the competition in high school before a standout college tenure at University of Washington and a short-lived pro career in the NFL and the old version of the XFL.

And one can't forget about Joey Porter, the Foothill legend who had one of the top NFL careers for any local, ever.

“When I came in, our team was stacked,” Shehee said. “We had a great offensive line. We felt we were one of the best teams in town.”

Oh, there is Mark McGill, Corwin Anthony, Cory Hall and former NFL running back Brent McClanahan coming out of South.

The landscape of Bakersfield has changed dramatically over the last four decades. In short, the city has moved west and south.

But today, for the first time in recollection, there is now a local high school athletics league comprised solely of teams from the east side of Bakersfield's Highway 99.

With East moving from the South Yosemite League, the new-look Southeast Yosemite League is all east siders with North, Highland, Foothill, South and Mira Monte taking the field. Of the three local leagues comprised primarily of public high schools, the SEYL is now the most historic of the bunch.

The Southwest Yosemite League has been touted as the “power league” over the last half decade, and rightfully so. The programs in that league — such as Bakersfield High, Liberty, Centennial and Stockdale — have played for or won a Central Section Division I championship.

But other than BHS — the oldest school in town — the rest of the public schools in the SWYL have opened up since 1992.

Since then, the city has gone from seven public schools to 15. The only schools built on the east side of Highway 99 during that time have been Mira Monte and Golden Valley.

As the city has changed, so has the landscape of high school sports, with plenty of athletic talent and success moving westward.

But even though it’s been 14 years since an SEYL team has won a section title (East beat Tulare Western 30-22 for the D-II championship in 2004), the east side is a fixture in the long and decorated history of Kern County football.

And this season marks a special time in that part of Bakersfield. With the ever-expanding landscape of the city changing, the six public schools — from South to North, East to Highland, Mira Monte over to Foothill — are finally in a league of their own.

“For our kids, that rivalry means a lot more,” Highland coach Mike Gutierrez said. “Now that all of these games are in league, it means a lot more. The emotions run so high knowing that it could kill any momentum you have going into playoffs.”

Some of the best football moments locally came shortly after East opened its doors in 1938.

It was a time when coaches stayed at one school for extended periods of time. Whether it was Turk Eliades at North, Larry Lafond at South or Ned Permenter at Foothill, the programs on the east side were successful in large part because of solid leadership and continuity.

Larry Press, the longtime sports editor at The Californian and Bob Elias Sports Hall of Fame member, recalled one of his fondest memories.

“Marger ‘Migs’ Apsit, a really nice guy,” Press recalled. “Came out from Illinois to play for USC, where he was the QB — blocking back, then zero in the single-wing offense. And he coached that at (East), the last manifestation of that ancient formation.”

Twice the Trojans won 10 games in a season under Permenter, during the 1974 and 1992 campaigns.

“Coach was a motivator,” Shehee said. “He was there for us 100 percent, for all of us players.”

Things have changed over the years, however.

The Trojans have yet to win a section title since opening in 1962 and named Brandon Deckard as head coach in the offseason. Deckard became the sixth head coach for the Trojans since Permenter retired 17 years ago.

“You see the reality of it, but it still bums you out,” Shehee said. “As an alum of Foothill, you want them to get better. But the reality is that is not happening.”

It’s an all-too-common theme for the teams in the SEYL. Since 2008, there have been 22 different head coaches at the six schools, with each program changing coaches at least once in the last decade. East, North and Mira Monte have all had four different coaches over the past 10 years.

South is the only SEYL program to have posted a winning record during that time. The Rebels, who had three consecutive nine-win seasons from 2014-16, are 64-48 since 2008. North, Foothill and Mira Monte, conversely, have all posted winless seasons and East had one-win campaigns in 2008 and 2015.

Things didn't continue in that direction for the Lions, however. The program has won just 11 times in the past 80 games and has just one playoff victory since 2010.

Continuity amongst the coaching staffs have proven to be beneficial for more successful SEYL programs.

South was in good hands with John Wren before his sudden death in 2013. Cary Mills, a longtime assistant under Wren, took over the program that season and the Rebels have posted a .500 record or better each year since 2012. In five years under Mills, South has won at least a share of the SEYL title each season.

Gutierrez is heading into his fifth season at Highland. The Scots are coming off arguably the best overall season since the school opened in 1970. Highland began the year 8-0 and shared the SEYL title with North and South, the first league banner of any kind in the football program's history.

Building off that success is key for Highland and all of the east side schools moving forward.

“We hope. Go back a few years ago to the playoff win over (Bakersfield Christian in 2016),” Gutierrez said. “It shows we can compete with other teams. We are excited about playing Tehachapi. Our guys get excited that we can expand our schedule. Our guys have done a good job of earning that.”

Bob Barnett is a historian on Central Section athletics. For decades he has been keeping records of major sports like football, basketball, baseball and softball. The following historical references are courtesy of Barnett.

The Californian surveyed readers on social media, spoke with players and former coaches from the past, and reviewed All-Area teams from yesteryear to come up with some of the best east side football players to ever grace the fields in Bakersfield. Here were some names that came up:

Have you been keeping up on our local news coverage? Test your news knowledge by taking the TBC Quiz appearing on Fridays in The Bakersfield C…