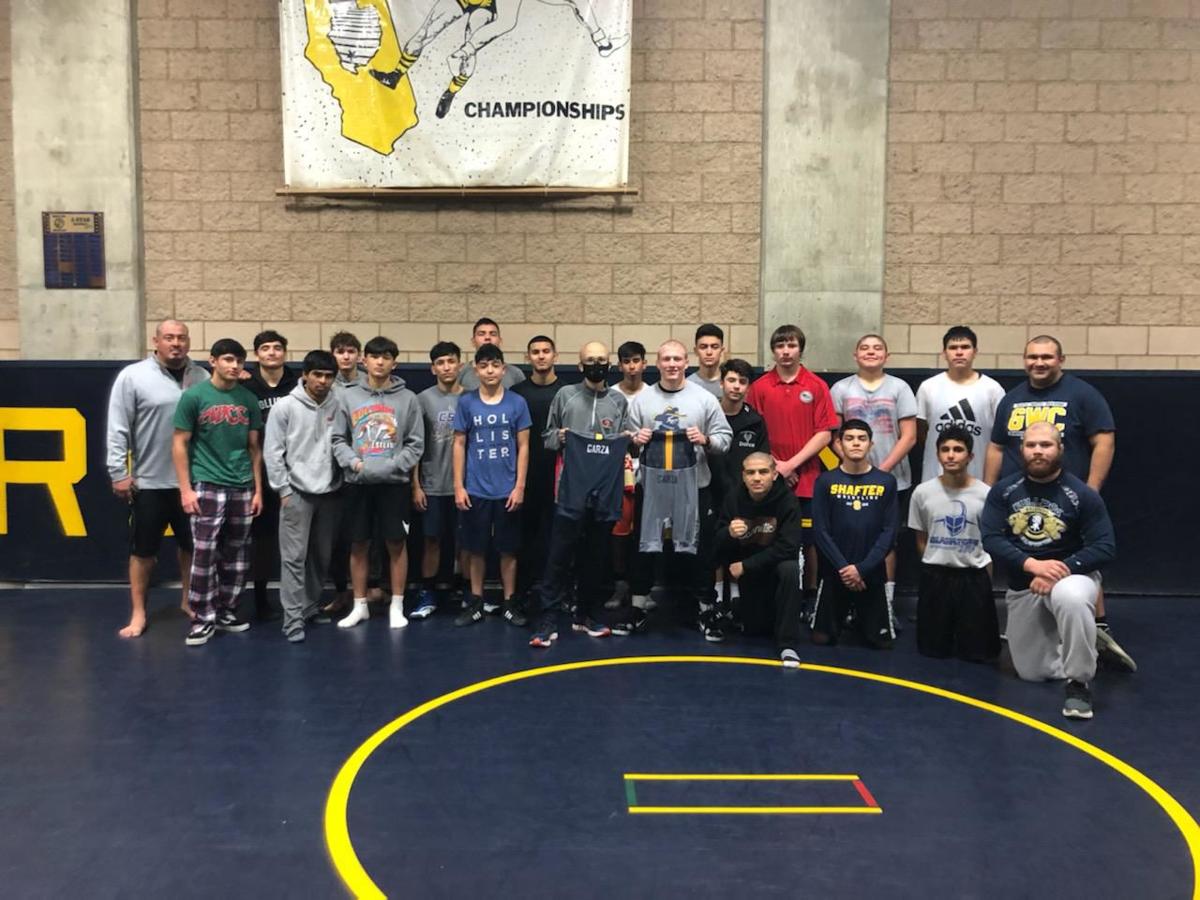 Shafter wrestler Nicolas Garza (front, center with mask) poses with members of the Shafter and Golden Valley wrestling team. The wrestling community has rallied around Garza, who was diagnosed with leukemia in October. 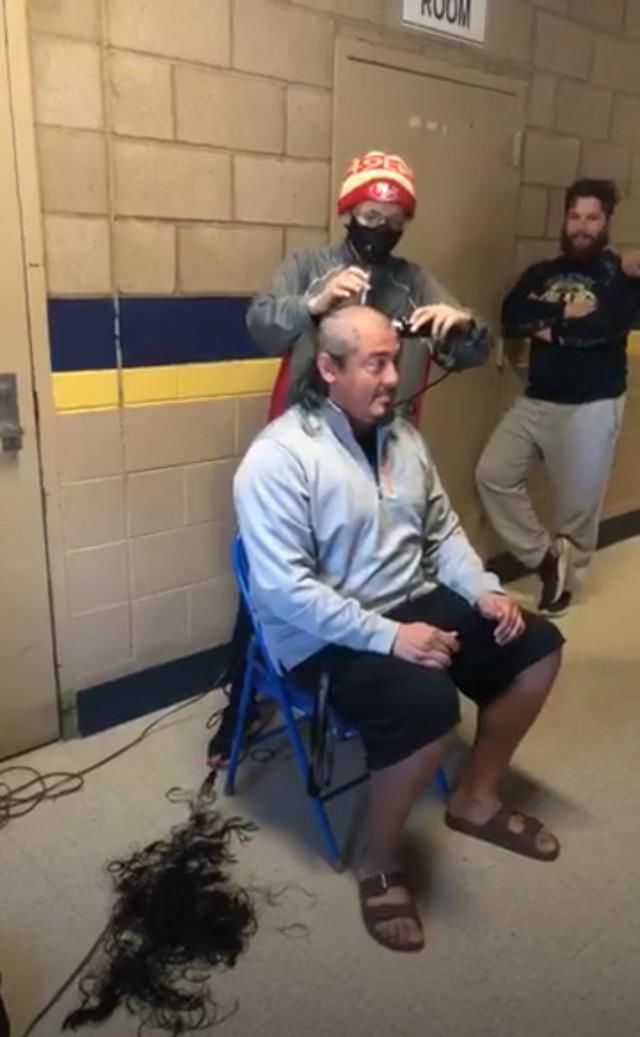 Nicolas Garza shaves the head of Golden Valley coach Joe Rojas. Rojas agreed to shave his head as a sign of solidarity for Garza, who is battling leukemia and lost his hair during chemotherapy. 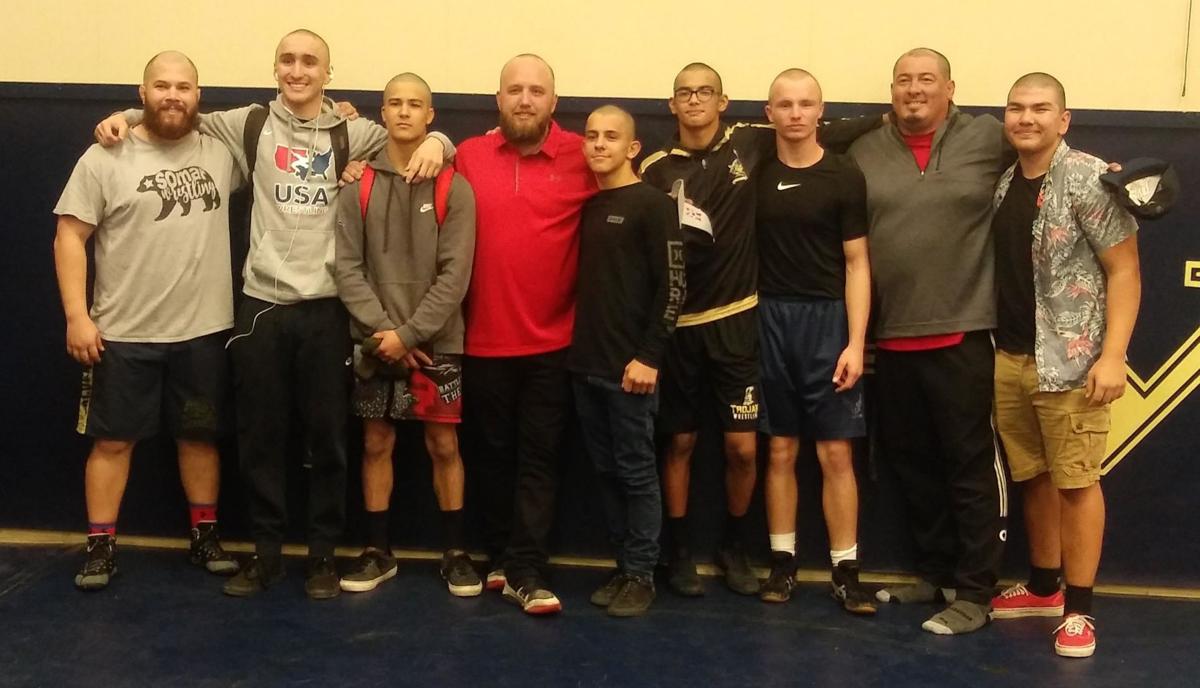 Several area wrestlers have shaved their heads in solidarity with Shafter wrestler Nicolas Garza, who was diagnosed with leukemia in October.

Shafter wrestler Nicolas Garza (front, center with mask) poses with members of the Shafter and Golden Valley wrestling team. The wrestling community has rallied around Garza, who was diagnosed with leukemia in October.

Nicolas Garza shaves the head of Golden Valley coach Joe Rojas. Rojas agreed to shave his head as a sign of solidarity for Garza, who is battling leukemia and lost his hair during chemotherapy.

Several area wrestlers have shaved their heads in solidarity with Shafter wrestler Nicolas Garza, who was diagnosed with leukemia in October.

As he scanned the room at an early season tournament, Joe Rojas noticed someone was missing.

Through joint practices and travel tournaments, Rojas, the varsity wrestling coach at Golden Valley, had developed a strong relationship with Shafter junior wrestler Nicolas Garza, and hoped to catch up with him when the Bulldogs traveled to Shafter for a JV tournament early in the 2019-20 season.

Searching for the wrestler he called Chief, an inside joke sprung from the duo's shared love of playful trash talk, Rojas was unable to find Garza through the wave of bodies.

After two years of working his way the through the JV ranks, Garza entered his junior season hoping to crack the varsity lineup for the Generals at either 113 or 120 pounds. But those plans were derailed in early October.

Feeling a prolonged soreness in his shoulder and abdomen, Nicolas and his father Tomas were told he was going through basic "growing pains" during an initial trip to the doctor.

When problems persisted, they went back to have some blood work done, and before they could even make it home from the appointment, doctors called Tomas, telling him to turn around and come back to the hospital.

Upon his return, a terrified Nicolas, just 16 years old, received grim news. He had leukemia.

"I was so speechless," he said of the diagnosis. "It was just little pains. You wouldn't imagine you would get diagnosed with that. It was shocking."

Nicolas was immediately transferred to Valley Children's Hospital in Madera. Initially expecting to be admitted for a week, he caught a persistent fever his chemotherapy-ravaged body struggled to fight. As a result, his stay lasted over a month.

Now out of the hospital, his life hasn't exactly returned to normal. Forced to wear a mask to protect himself from the elements, Garza has chemo treatments every Monday and still can't be around large groups of people for an extended period of time.

"It's been really tough," he said. "Going every Monday, it just makes me tired. It's a just a big challenge I have to overcome."

Luckily, Garza has been able to stay in mostly high spirits, thanks in part to the efforts of the local wrestling community.

Initially shocked to hear of Nicolas' diagnosis, Rojas reached out to Tomas Garza with an idea. With Nicolas' hair gone, a side effect of his chemotherapy, he planned to shave his head as a sign of solidarity.

It would be a jarring shift in appearance for Rojas. Two years removed from his last haircut, he had a flowing mane that extended beyond his shoulders.

But when he arrived at the Shafter wrestling room on Dec. 31, he handed Nicolas a pair of clippers, telling him "I want to look just like you, buddy."

Though the sport has led to the formation of serious rivalries, Rojas says there's a strong sense of community among area wrestlers, one that's been on full display during Garza's ordeal.

“It’s a family," Rojas said. "Most of them have been wrestling together since they were four or five years old. When it comes down to it, competing against each other, that’s a side note. When one of your fellow wrestlers gets sick or anything happens to him...we reach out and support him."

That support has grown in recent weeks. Responding to updates he's posted on his team's Twitter and Instagram pages, Hill says wrestlers from Foothill and North have also shaved their heads in support.

"They weren't here with us, they just did it on their own," Hill said. "They wanted to show him we're just one big family in Kern County and we have your back. It was awesome for Nick. You could tell he appreciated it."

Just three months removed form his diagnosis, Nicolas a long battle in front of him. And though doctors have told him it could take upwards of three years before he returns to full health, one family member expects a shorter recovery.

"He's a fighter," Tomas said. "They told him (it would take) two-and-a-half to three years (but) I think he'll be better before that."

While focused on his present struggles, the illness hasn't stopped Nicolas from making plans for his future. Having taken an interest in robotics in recent years, he's considering pursuing a degree in engineering when he finishes high school.

Having wrestled since the age of seven, he's also optimistic he can make a return to the mat, with hopes to one day wrestle at the college level.

Even if some goals seem more obtainable than others, Nicolas remains steadfast in his quest to live the life he'd previously envisioned for himself.

"As soon as you give up, it just goes downhill from there," he said. "Never give up."