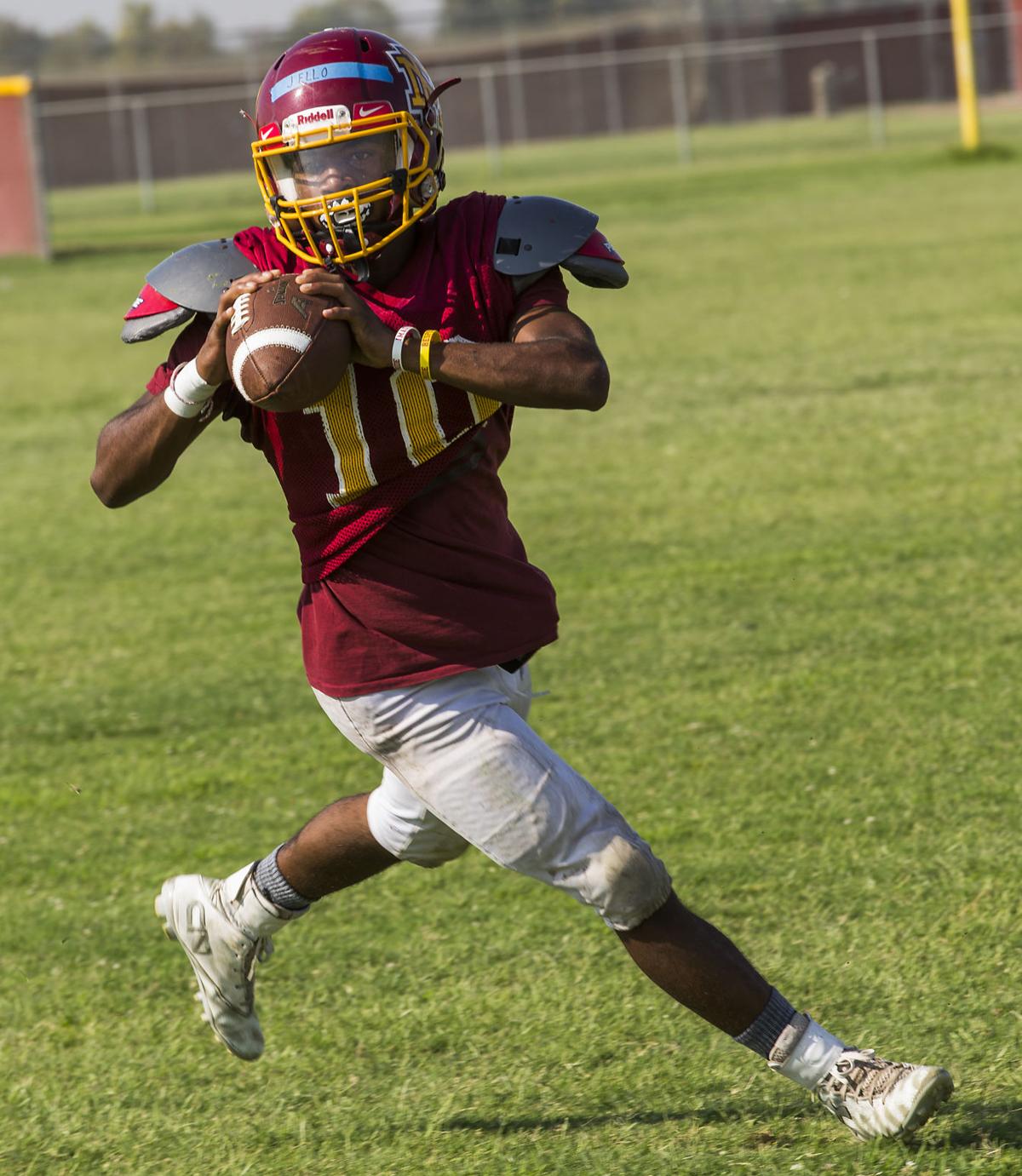 Lion QB Jaulynee Riggens looks down field for a receiver. 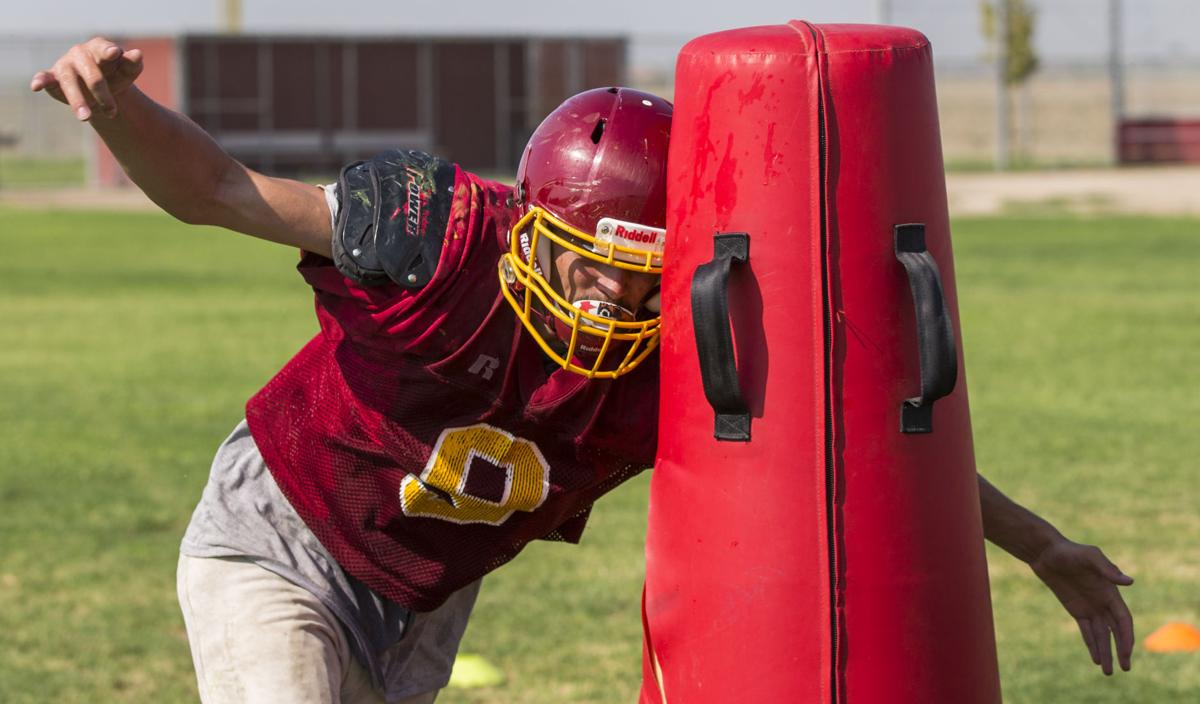 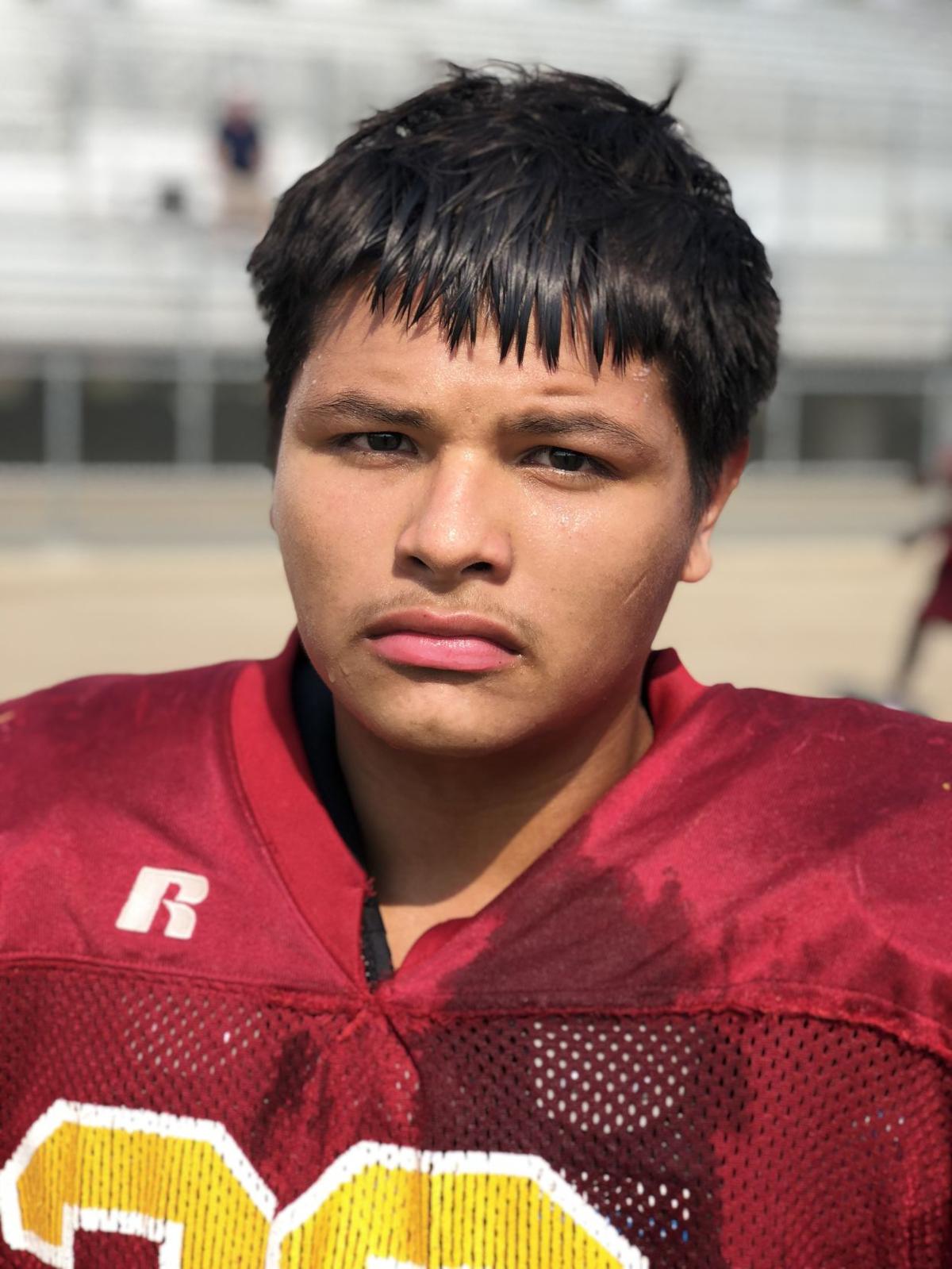 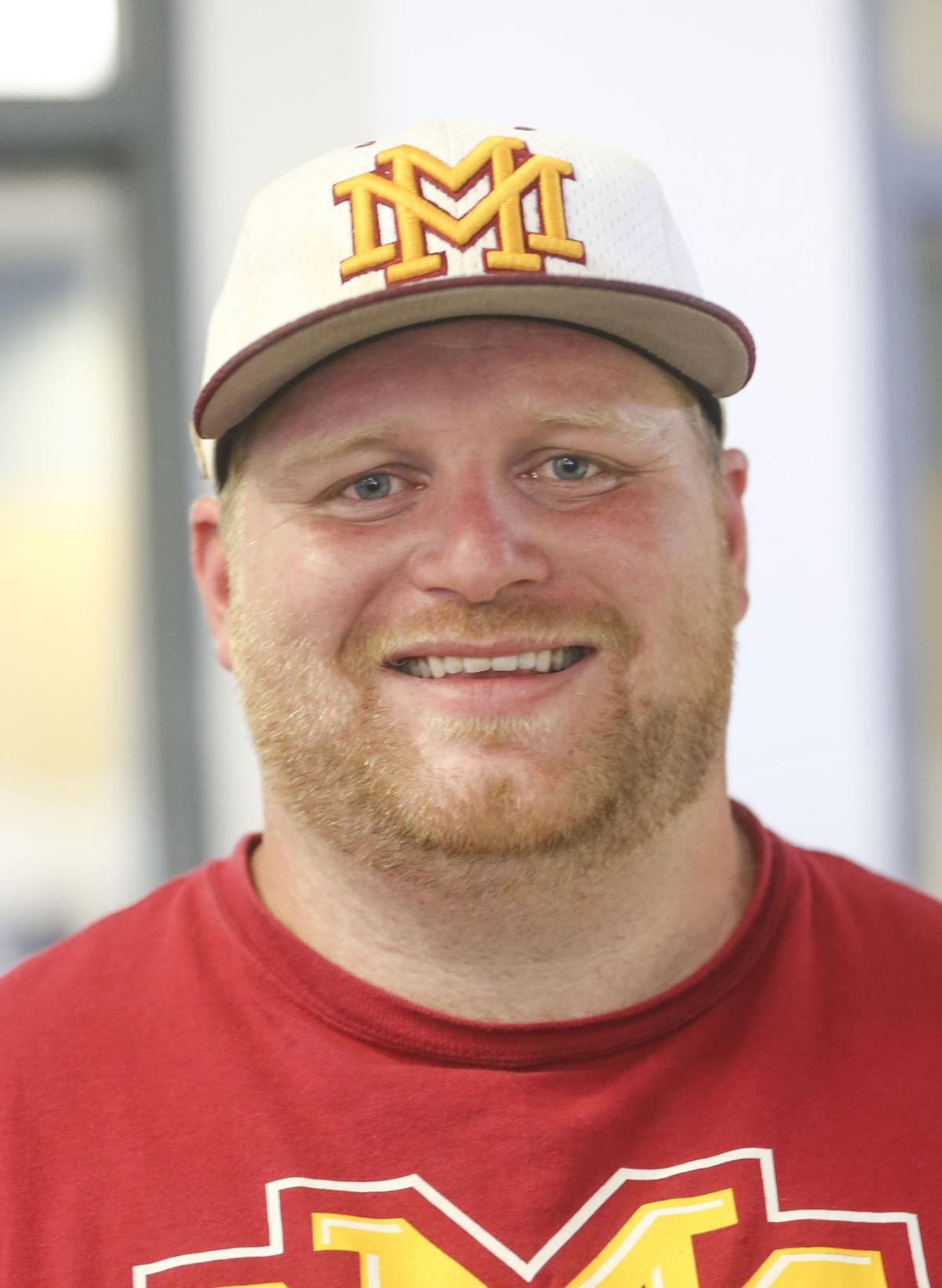 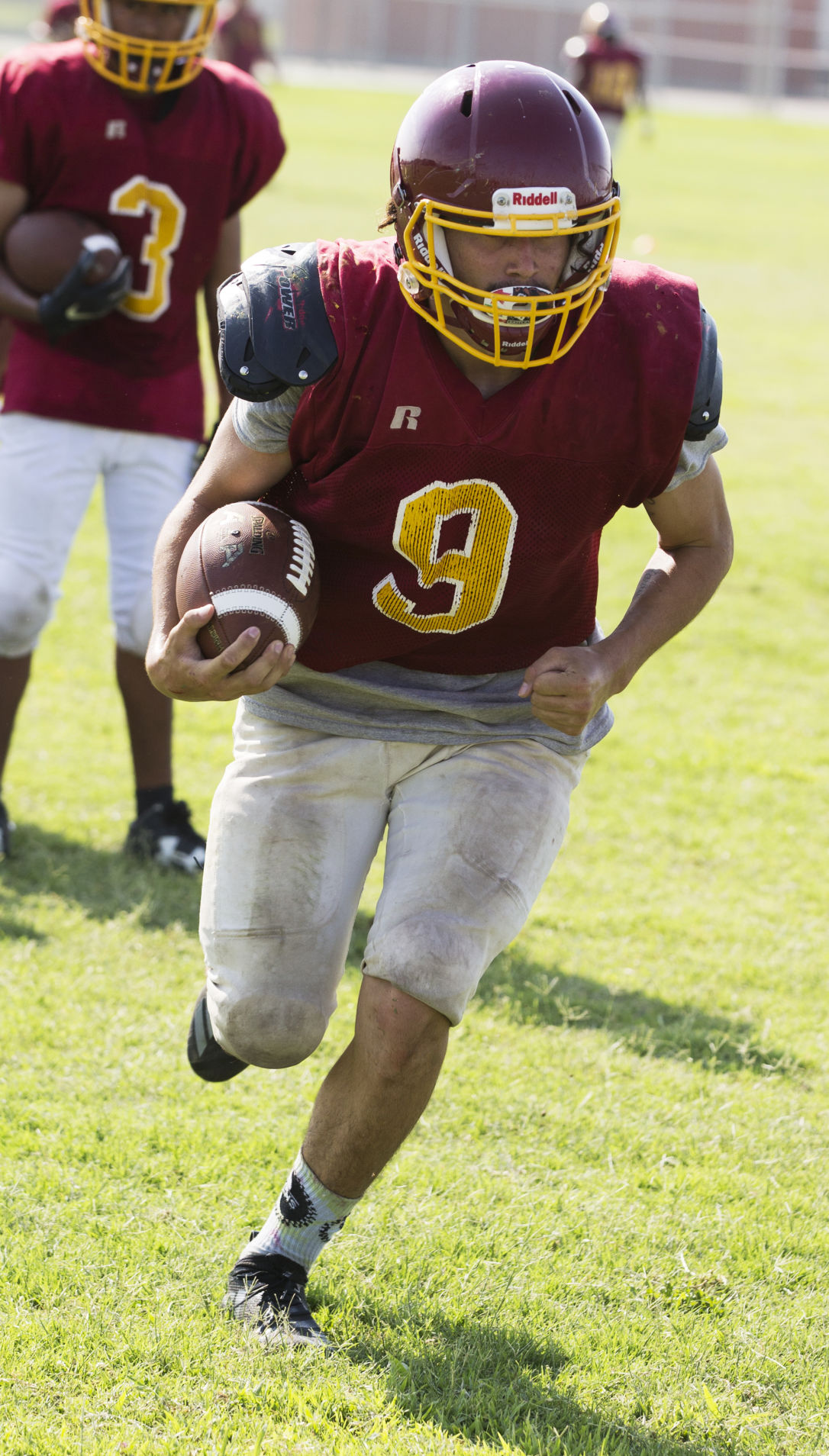 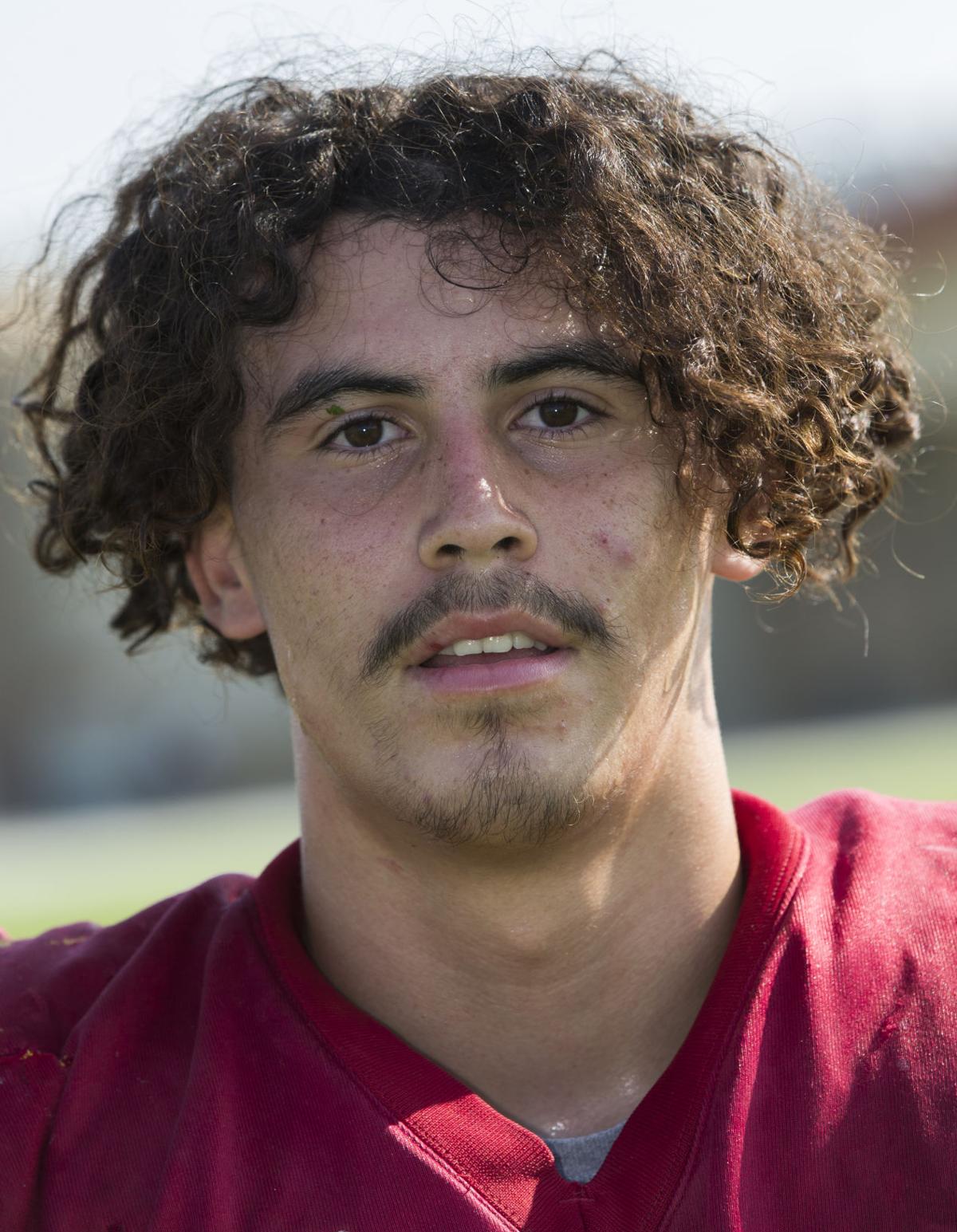 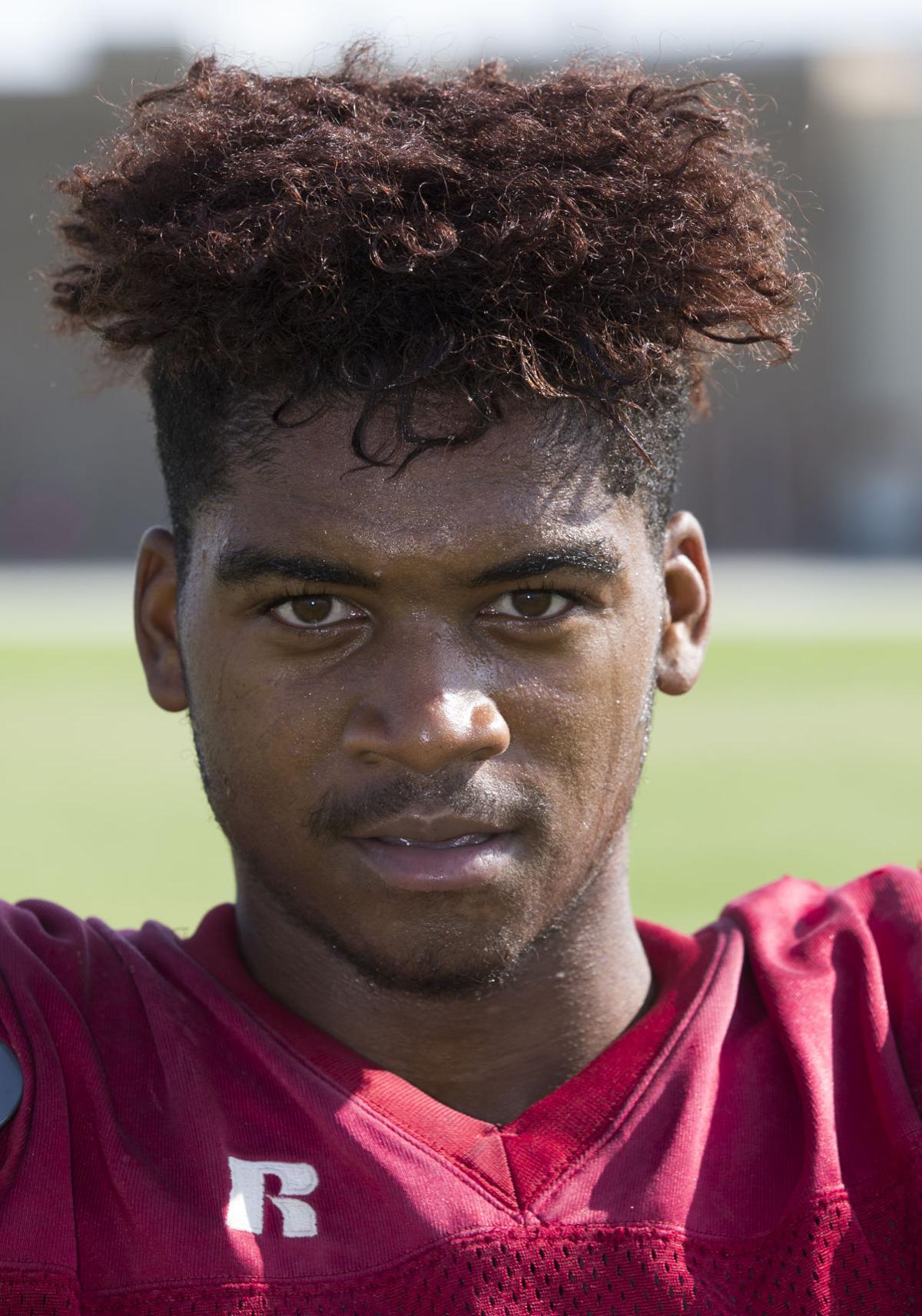 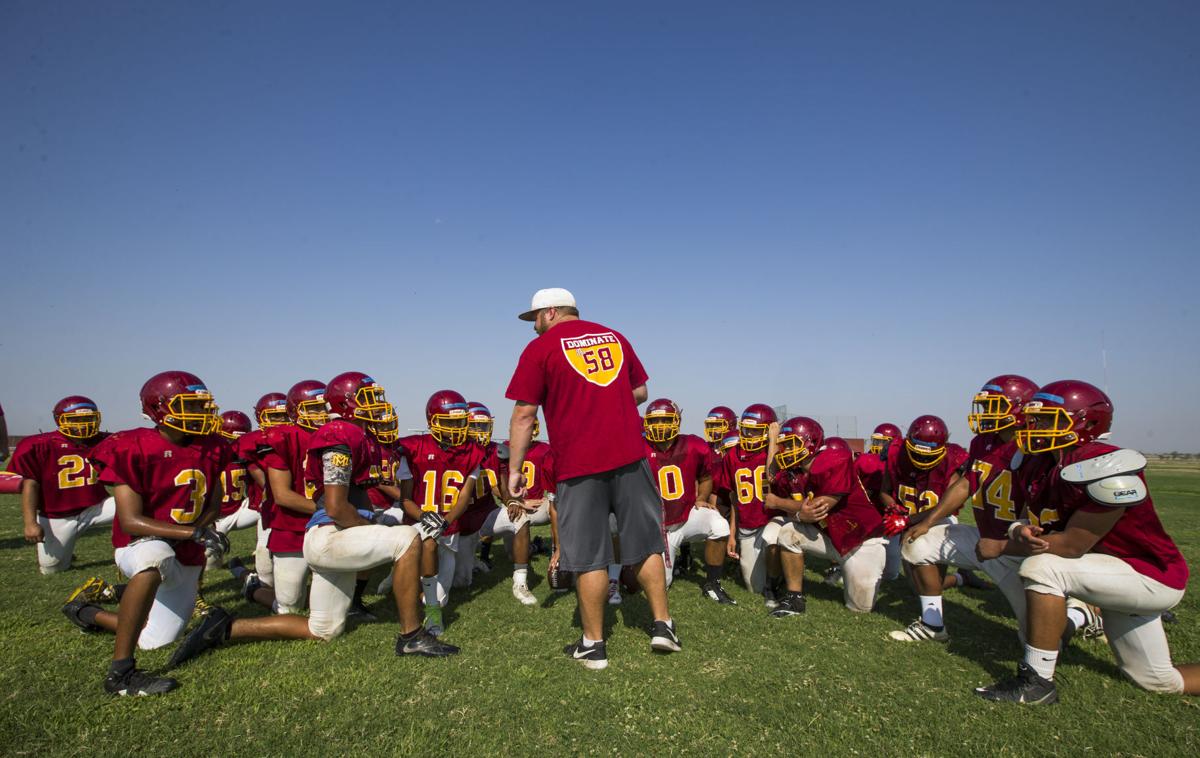 Christian Johnson is in his first season as head coach at Mira Monte. 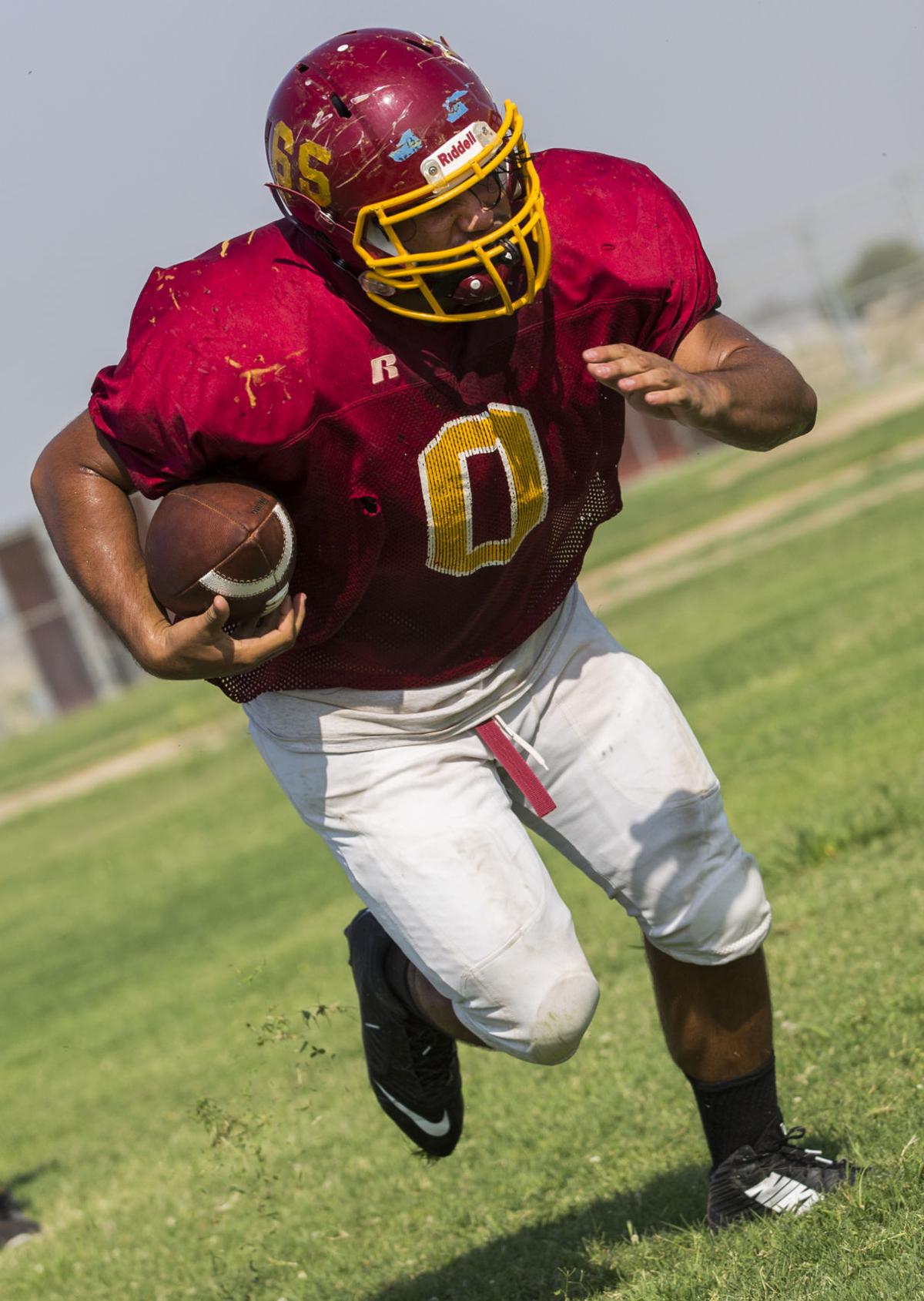 Though a lineman, Mira Monte's Yiannis Vlahakis got to handle the ball at this practice. 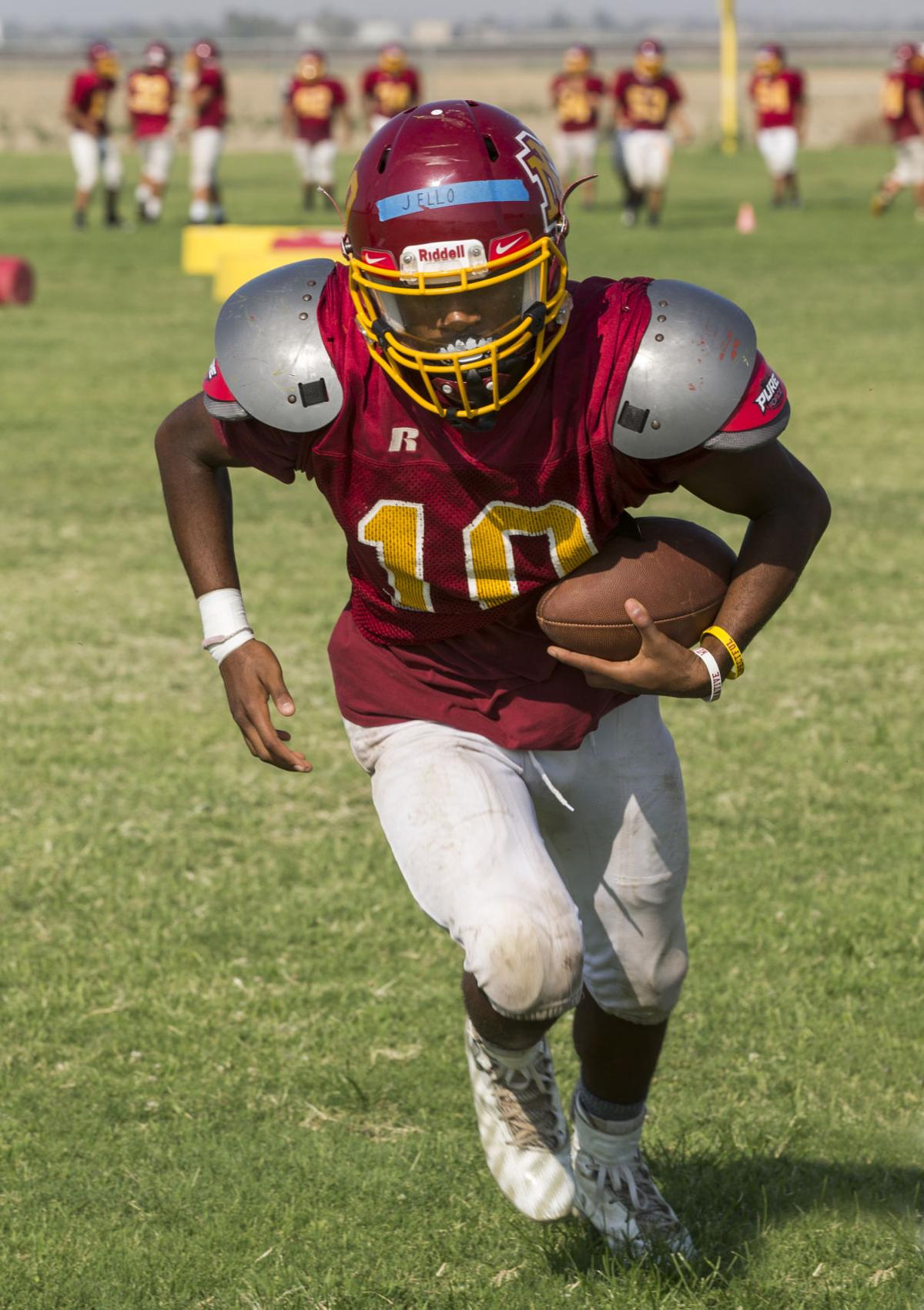 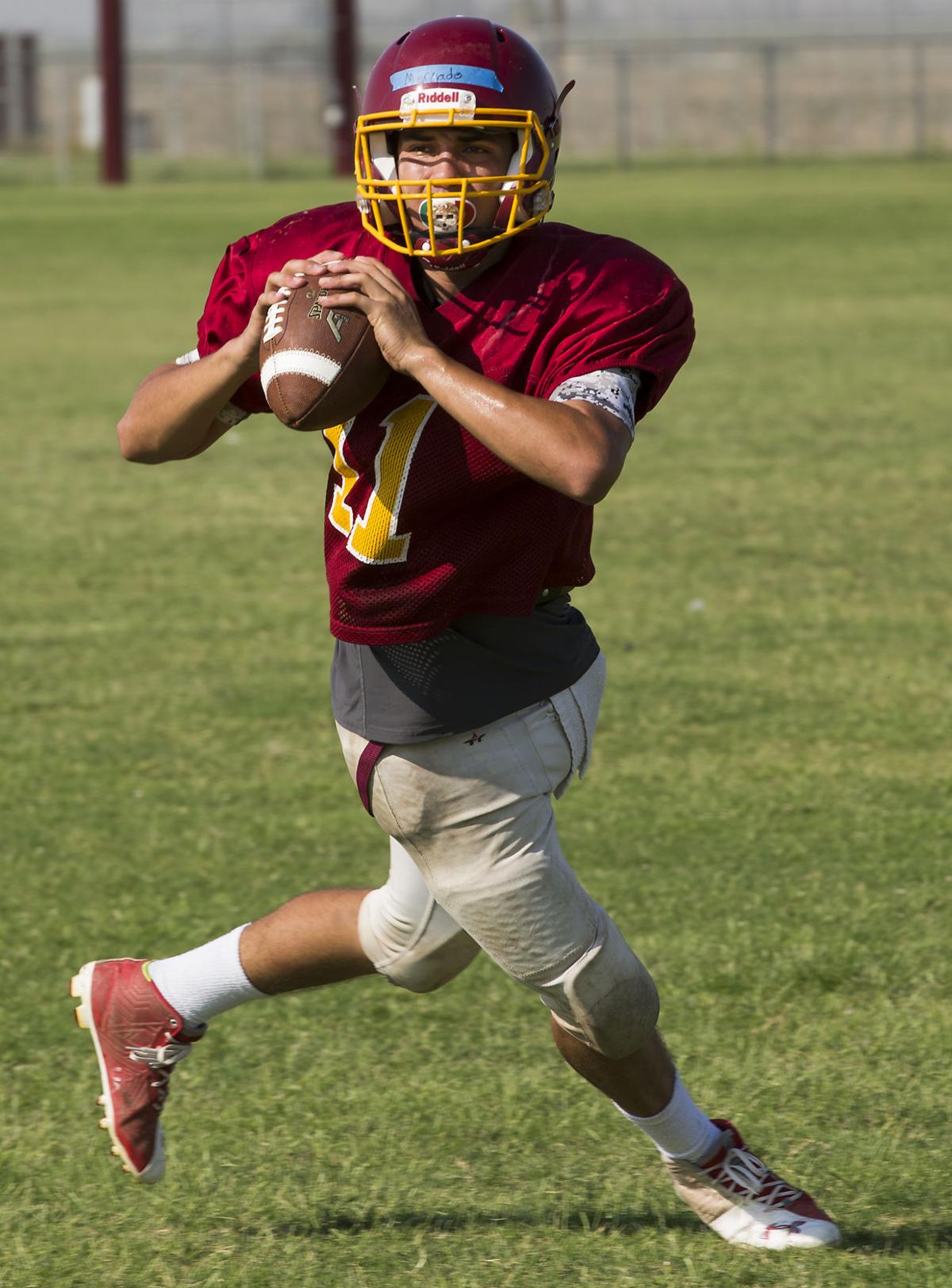 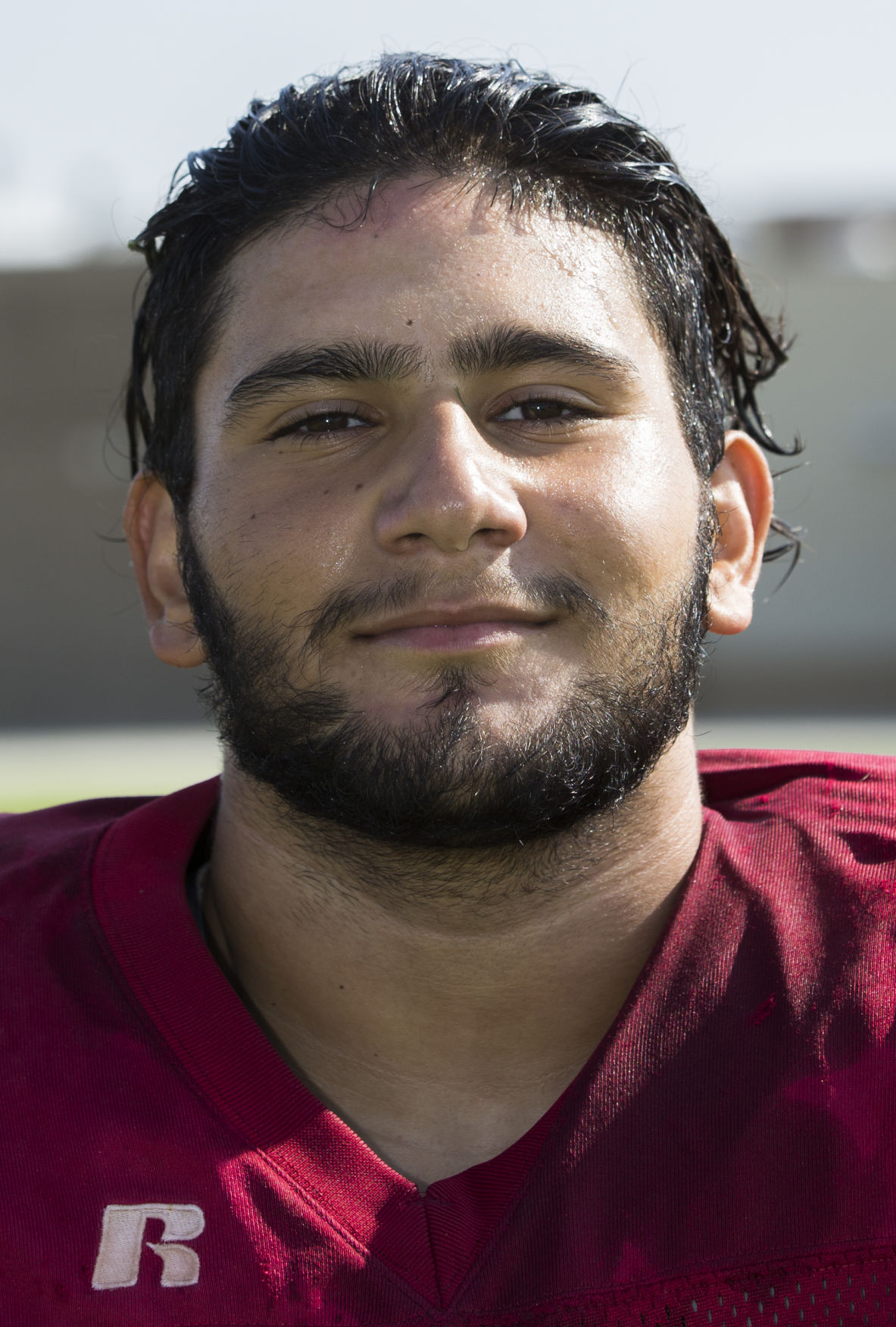 Lion QB Jaulynee Riggens looks down field for a receiver.

Christian Johnson is in his first season as head coach at Mira Monte.

Though a lineman, Mira Monte's Yiannis Vlahakis got to handle the ball at this practice.

Ralph Campas, senior, DE/ TE - The new coaching staff at Mira Monte strongly believes the defensive line is the top group on the team. Leading the way up front is Campas, a strong and slender edge rusher with speed.

Yiannis Vlahakis, senior, OL/NG - Another leader up front. Will be asked to play both ways on the line as top returning tackler.

Jaulynee Riggens, junior, RB/WR - A speedster with great vision. Will be a focal point of an offense that needs a shot in the arm after scoring just 54 points in 2017.

Javier Vasquez, freshman, DE - Without a JV team this season, plenty of underclassmen will get a shot at varsity. Vasquez has the size and strength to help immediately.

On the Thursday morning before school started during the first week of fall practice, there were 11 cars in the parking lot near the football practice field at Mira Monte. Seven of those vehicles belonged to members of the Lions’ coaching staff.

As the farthest-east campus in Bakersfield sitting between two agricultural fields on the south side of Highway 58, it's far removed from the vast suburbia that most of the newer schools in town resemble.

“Transportation has been a challenge,” Lions first-year head coach Christian Johnson said. “I know we have a ton of buses that service our school, I know it’s not an ideal situation. I’m not going to make excuses about it. Our kids are getting here every day and we have had to adjust our coaching schedule and practice schedule to help them.”

When Johnson took over the program last season after leaving Ridgeview as an assistant coach, he knew there was going to be the challenge of getting players to practice. Count a brand new coaching staff in on that challenge as well after the Lions went 0-9 in 2017.

“It’s just getting our kids out,” Johnson said. “That was the biggest factor that I was told when taking this job. But the kids have been coming out all summer and putting in a lot of time and they are getting better. We are getting there, little by little.”

Johnson said the roster will likely be around 40 players because he chose to cancel the junior varsity program this season to allow his staff to work more closely with the underclassmen on the varsity level.

“We have raised the bar and told them this is the standard we are going to set,” Johnson said. “I have a great coaching staff that has instilled that.”

The defensive line will be key to the program this season, Johnson said. Led by seniors Ralph Campas and Yiannis Vlahakis, stopping the run will be of vital importance.

“I am not saying we are going to come in here and win right away, but the tradition starts now,” Johnson said. “We will compete and earn the respect on the east side of town. It’s all about the kids. They’ve bought in.”

Since the current seniors on Mira Monte's roster were in junior high, the Lions have won just four football games in five years.

Making things even harder on the returning players this fall, the Lions lost a 28-27 heartbreaker to rival Foothill to finish off last season. In the other eight games of the 2017 campaign, the Lions managed just 27 points total and were shutout six times.

When Christian Johnson took over as the head coach, he made sure that he modeled his leadership after longtime Ridgeview coach Dennis Manning.

“I am not trying to turn Mira Monte into Ridgeview because Mira Monte is not Ridgeview,” Johnson said. “But some of the things I have taken from being with Dennis (Manning) and those guys over there. It’s about the team. Everyone has a role. When they buy into that, fun things start happening. Mostly winning.”

“The new coaching staff is different than what we had before,” senior defensive lineman Ralph Campas said. “It’s more intense. You’ve got to get used to the coaches caring more.”