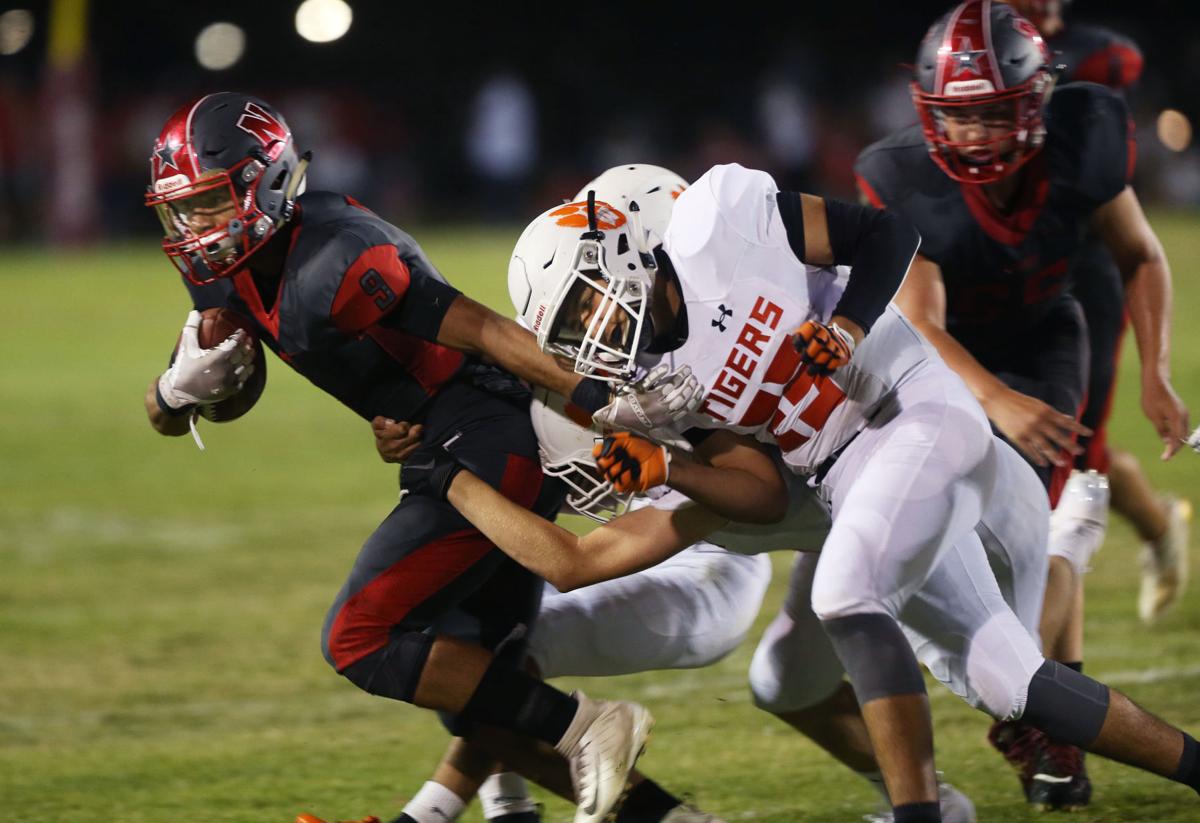 North High's Brian Dean looks for extra yardage as a host of Wasco defenders latch on during a game last season at North. Dean is one of several local players struggling to deal with the postponement of football from the fall to the spring. 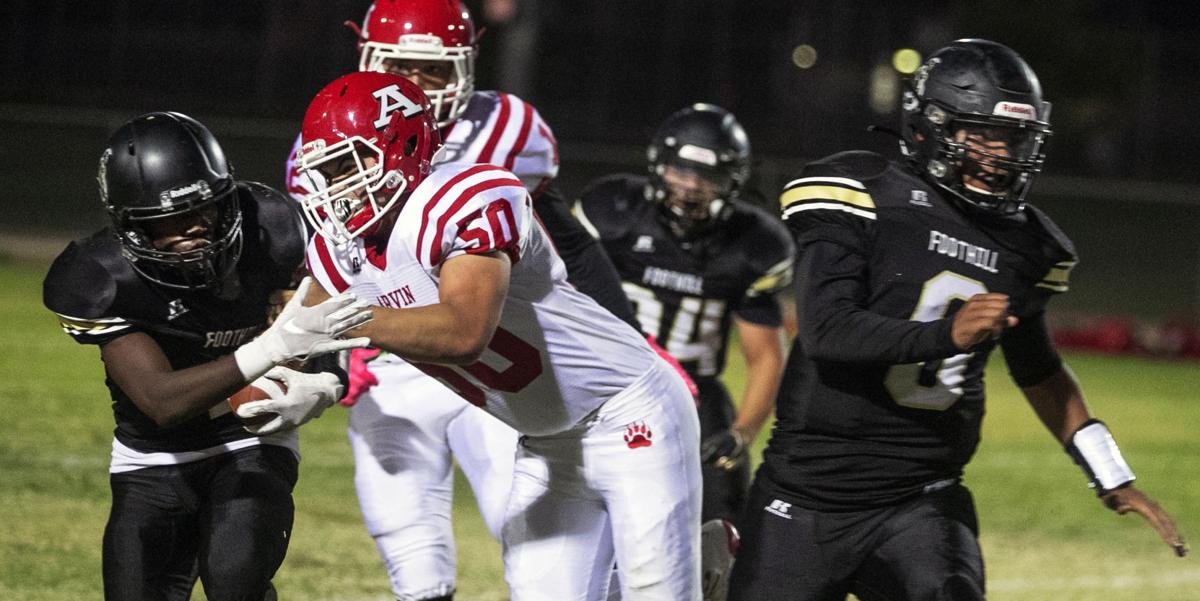 Foothill's Tyson Reynolds gets looks to shed an Arvin tackler in a 2019 game.

North High's Brian Dean looks for extra yardage as a host of Wasco defenders latch on during a game last season at North. Dean is one of several local players struggling to deal with the postponement of football from the fall to the spring.

Foothill's Tyson Reynolds gets looks to shed an Arvin tackler in a 2019 game.

Still unable to take part in team-sanctioned activities, Reynolds says he and his Foothill teammates have been competing in numerous seven-on-seven, touch football tournaments in recent months. They've even found great success, with Reynolds saying his team will "usually go to the championship and take first or second place."

But even though playing in these tourneys offers both physical and mental benefits, Reynolds says it doesn't even come close to replicating the thrill of putting on the pads and going to battle on a Friday night, a thrill COVID-19 ripped away from every player in the state this fall.

"I honestly don’t feel like it gives me a return to normal because it’s touch and I think football isn’t football without the physical contact," said Reynolds, who will be a junior running back when the rescheduled season kicks off in January.

A lack of on-field contact is just one problem facing area players, who are still adjusting to a fall without football.

While some players have gotten a multitude of offers from major college programs in the past year, others, like Reynolds, have yet to get the desired looks, despite a strong performance on the field.

Reynolds, who rushed for 978 yards as a sophomore in 2019, still hopes to catch the attention of Division I or Division II coaches during his junior year, considered by many to be the most important season of the recruiting process. Currently Reynolds says he has no offers.

He isn't alone in that regard, and others in the city are running out of time to make an impression on college coaches.

Despite an excellent junior season, where he rushed for 1,300 yards and accounted for 18 touchdowns, North running back Brian Dean has had "no offers or contact with any coaches." And after adding nearly 20 pounds of muscle this offseason, Dean has grown frustrated with his inability to showcase his physical improvements on film.

"My goal is to become a D-I student-athlete," he said. "And I feel like with all the stuff that's happening, it's putting a pause for me to get where I want to go."

And while the opportunity to impress college scouts hasn't been completely taken away, standing out to recruiters in the spring may prove to be a tricky proposition.

Though some college football is being played this fall, programs that haven't canceled their seasons outright elected to move them to the spring, which would divert their attention from what is generally the height of recruiting season.

Roster spots will also be more difficult to come by. The NCAA has already awarded an extra year of eligibility to fall athletes who've had their seasons canceled, creating fewer scholarship opportunities for incoming players.

A more pressing issue seems to be coming from the academic side of things.

With students still not allowed to attend school in person, all Kern County schools are currently holding classes online. Both Reynolds and Dean say they and many teammates are struggling to adjust to the more impersonal style of learning, with Dean offering a particularly blunt criticism of the process.

"I definitely feel like it's trash," he said. "I'm a person-to-person learner. I like to be face-to-face."

Dean says the problems go beyond personal preference, citing an incident last Friday where an IT issue prevented him and his schoolmates from accessing the day's assignment.

With just one high school season remaining, Dean acknowledges that the junior college route may be his best option if he hopes to extend his football career beyond this spring. Though not ideal, he says he's confident he can achieve his ultimate goal, even if he has to take a roundabout path to get there.

“I definitely feel like I can get (to a D-I school)," he said. "Right now, I guess, is just not the time for me. I’ve just got to be patient and know that my time is coming.”

Though he has more time on his side, Reynolds says he'd also be willing to go the JUCO route if needed. But with the schedule having already been turned on its head, he fears world events may have permanently derailed the goals of some of his peers.

“Without football, I think a lot of athletes coming out of Bakersfield won’t get looked at," he said. "It can stop a lot of us from doing what we have to do as far as trying to make a way not only for ourselves, but make a way for our families as well.

Moardeeb, we're all used to your incessant, never-ending thread of negativity and gloom/doom posts - even on articles on our local athletes making it in the NFL...so sad. Now you're attacking High School kids who are having to deal with these unprecedented challenges and a completely new way of approaching their once-normal lives. Why can't you at least try and walk in their shoes for once? I couldn't imagine viewing life through your dark, cynical, dire lens...it's a shame you never learned to look at things from a positive perspective. What are you going to do when Covid has subsided and these student-athletes are all enjoying life to its fullest again? I'm sure you'll figure out a way to rain on their parade and try and kill their enthusiasm with a moarbid dose of doom and gloom about the next big wave of...I don't know...something horrible. Misery loves company, so you'll find it I'm sure.

Thanks Cal. I firmly believe Mr. Dweeb is the Howard Cosell for TBC. His comments seem to incite controversy on everything. He dislikes everything about Bakersfield. If I was so unhappy about my surroundings I would move someplace where I could be happy. Perhaps Downtown Portland.

How about use this time to work on academics? Quit whining.

Go back under your dining room table Dweeb...

The closest you ever got to a football field was being the second assistant water boy...

No, I take that back, you might've been a cheerleader...

My name is Tyson Reynolds and I don’t think nobody is whining, we’re just trying to get our point across that something was taken away from us that we deeply love and have an huge appreciation for. While this is being taken away from us it’s also keeping kids like me from creating a future for not only ourselves but others in our family as well. A lot of students wouldn’t have good grades in school if sports weren’t there as being apart of the motivation to keep up with their grades too. I don’t know what you get out of being a negative person but that type of attitude shows what type of person you are and it won’t get you anywhere in life big dog. Thank you

Pay no attention to the angry dwarf- you do you and I wish you the best.

TR, Look at the bright side your healthy young you avoided a Hot double session this year and yo are I assume 100 percent healthy. Who knows you could have ripped a Hamstring or had a career ending injury. Good luck your young and you have nothing but time on your side. Dweeb is a Idiot fool.