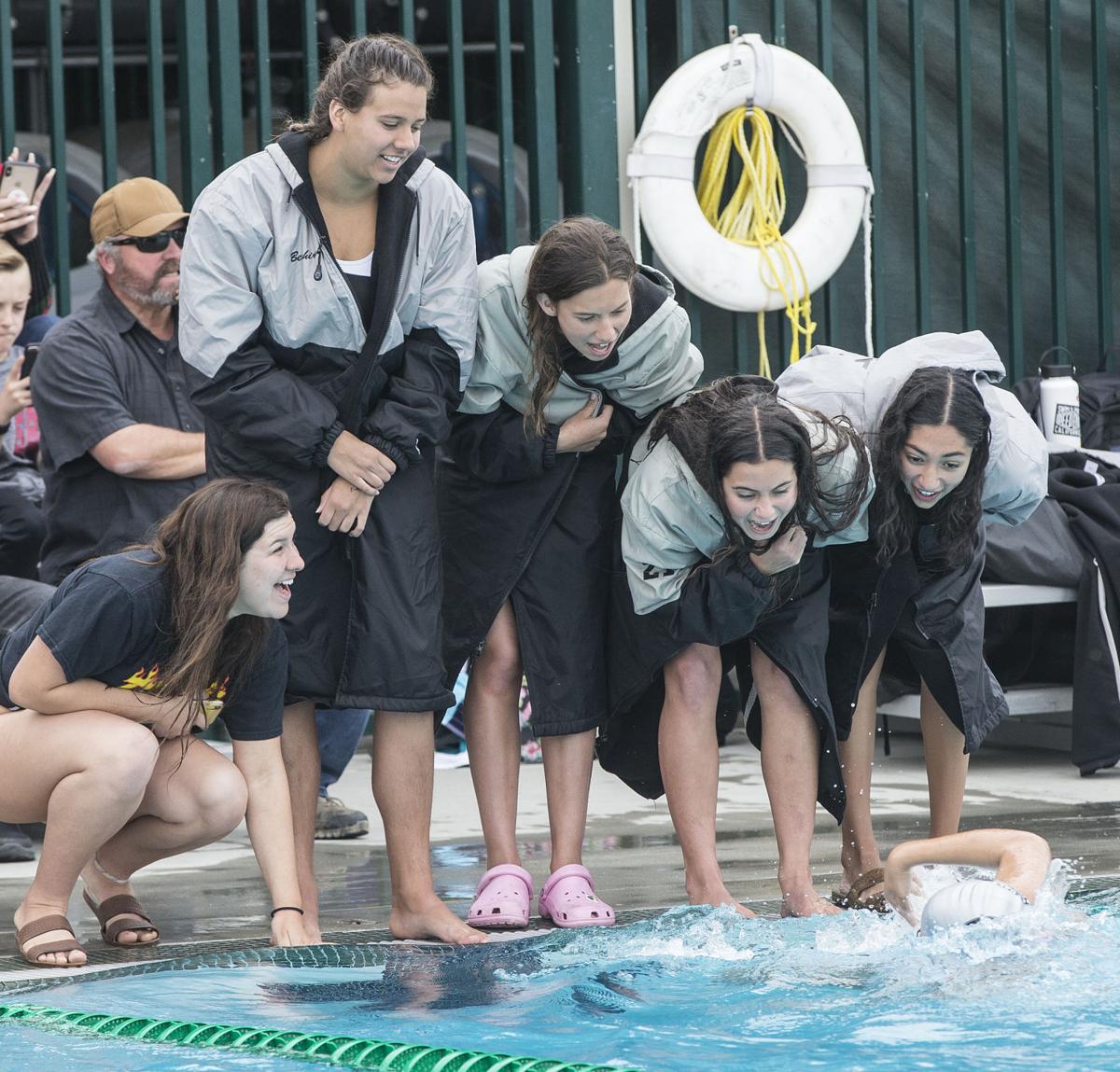 The Stockdale girls swim team cheer on a teammate during a 2019 competition. 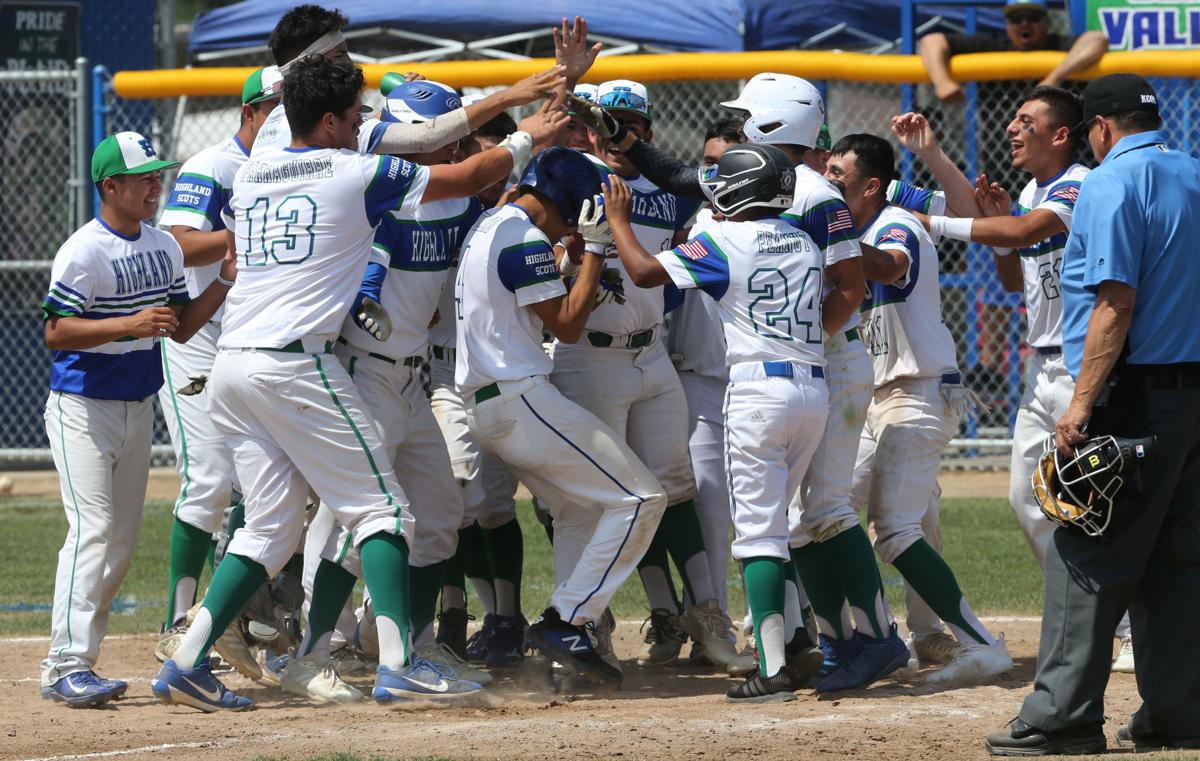 Highland baseball teammates gather around home plate to celebrate a home run during the 2019 Central Section Division III quarterfinals. Baseball is one of six high school sports set to return to action following a ruling by the Kern High School District on Wednesday morning.

The Stockdale girls swim team cheer on a teammate during a 2019 competition.

Highland baseball teammates gather around home plate to celebrate a home run during the 2019 Central Section Division III quarterfinals. Baseball is one of six high school sports set to return to action following a ruling by the Kern High School District on Wednesday morning.

After nearly a year of starts and stops, plans to bring certain high school sports back to Kern County finally appear to be gaining traction.

At a special Board of Trustees meeting on Wednesday, the Kern High School District announced it was moving forward with plans to allow boys and girls golf, swimming and diving, track and field and tennis to return. All sports have been given clearance from the CIF to return while the county is in the most restrictive purple COVID tier.

The board is also working to allow participants in red tier sports baseball and softball to begin preparations for workouts in anticipation for a spring season.

The motion was passed unanimously by the board. It will go forward pending the approval of a Safe School's For All review plan, which the board began working on after its monthly meeting on Feb. 1.

The expectation is that it will be approved by the next scheduled meeting on March 1.

“Rules may change, protocols may change … there’s tons of unanswered questions and changes by the day," Superintendent Bryon Schaefer said. "We need to still follow all safety guides including wearing masks, social distancing and everything else related to COVID safety. But we believe we can safely get our student-athletes back to conditioning in the listed sports."

KHSD schools were originally given clearance to hold team workouts in October, but all activities were canceled after a spike in COVID cases led the to implementation of a state-wide stay-at-home order in December. Gov. Gavin Newsom lifted the order on Jan. 25.

School Support Services Director Stan Greene says Wednesday's ruling is far more significant than the one passed in October, as this will allow teams to hold full practices as opposed to highly modified conditioning drills.

"It's honestly been the first good news we've had this year," Greene said. "We couldn't be happier. We're really excited that our board has chosen to move in a direction of reopening athletics."

Even if there is a full return to competition, things will hardly be normal for spring teams. Accessibility to golf courses is expected to be an issue and Greene was recently told that one location that has previously hosted swimming and diving events would not do so this year.

Greene also said that teams will likely have greatly reduced rosters while other modifications — limited number of participants in a lane in swimming, players bringing their own can of balls in tennis for example — will be strictly enforced.

But after such a prolonged stretch of inactivity, Greene expects returning athletes will be OK following the new guidelines.

"It's really been an unfortunate 11 months for our students," he said. "I'm happy that today there was a step made in the right direction."

While the news was great for some, other sports are still facing an uphill battle.

Greene said the board will continue to monitor COVID case numbers. And while he isn't going to close the door on the possibility of those sports returning, he says he won't do anything he believes jeopardizes schools in the long run.

"I think it’s important that we continue down the path of doing all the things we need to do to remain open, remain safe and try to put this thing behind us where we can return next year back to some form of normal," Green said. "That’s my hope at this point, that we pull off all the sports we can at this point within the guidelines and more importantly, that we’re preparing ourselves for next year where our staff is vaccinated … where we can get back in the classroom.”

The news appears quite grim for season one, or fall sports. When the stay-at-home order was lifted, Greene said the board only commissioned him to focus on season two and that "right now, there is not a plan to address season one sports."

Progress, at a state-wide level, has been very slow regarding football, where last Friday, representatives from Gov. Newsom's office said they were still two weeks away from offering any potential updates to youth sports guidance. Several activists have lobbied for the fate of youth sports to no longer be tied to the COVID tier system.

Greene said he and the board "Have no indication from anyone at any level" that restrictions will be lifted in time for football teams to play in the spring.

On Wednesday, Nevada Gov. Steve Sisolak approved a plan that will allow high school football to return in that state. California is now the only state not to approve such a measure.