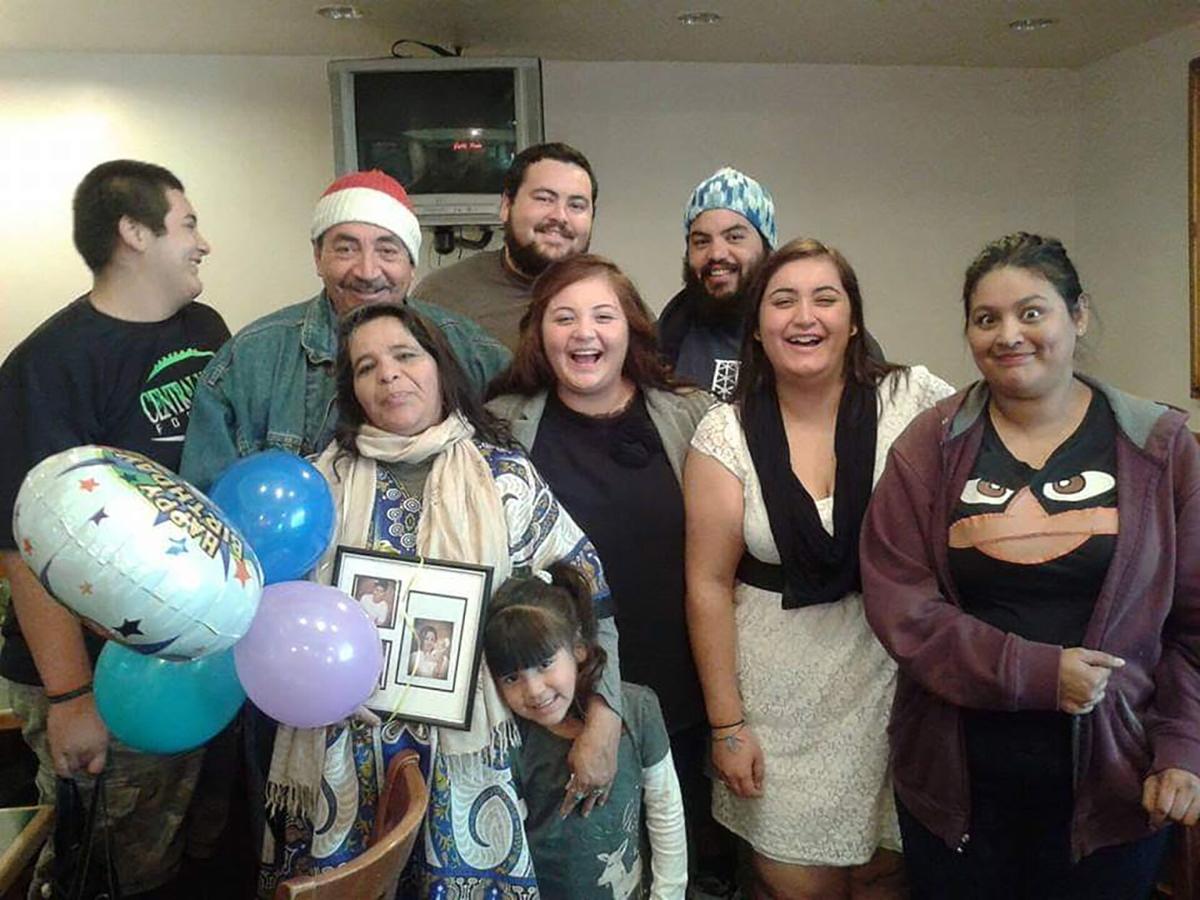 Members of the De La Torre family celebrate a birthday in 2015. Brothers Angel (back row left) and Gilberto (back row, second from right) have recently taken up sumo wrestling to honor the memory of Sergio, seen standing next to Gilberto in a blue beanie. Sergio, who introduced his brothers to sumo, passed away in 2019. 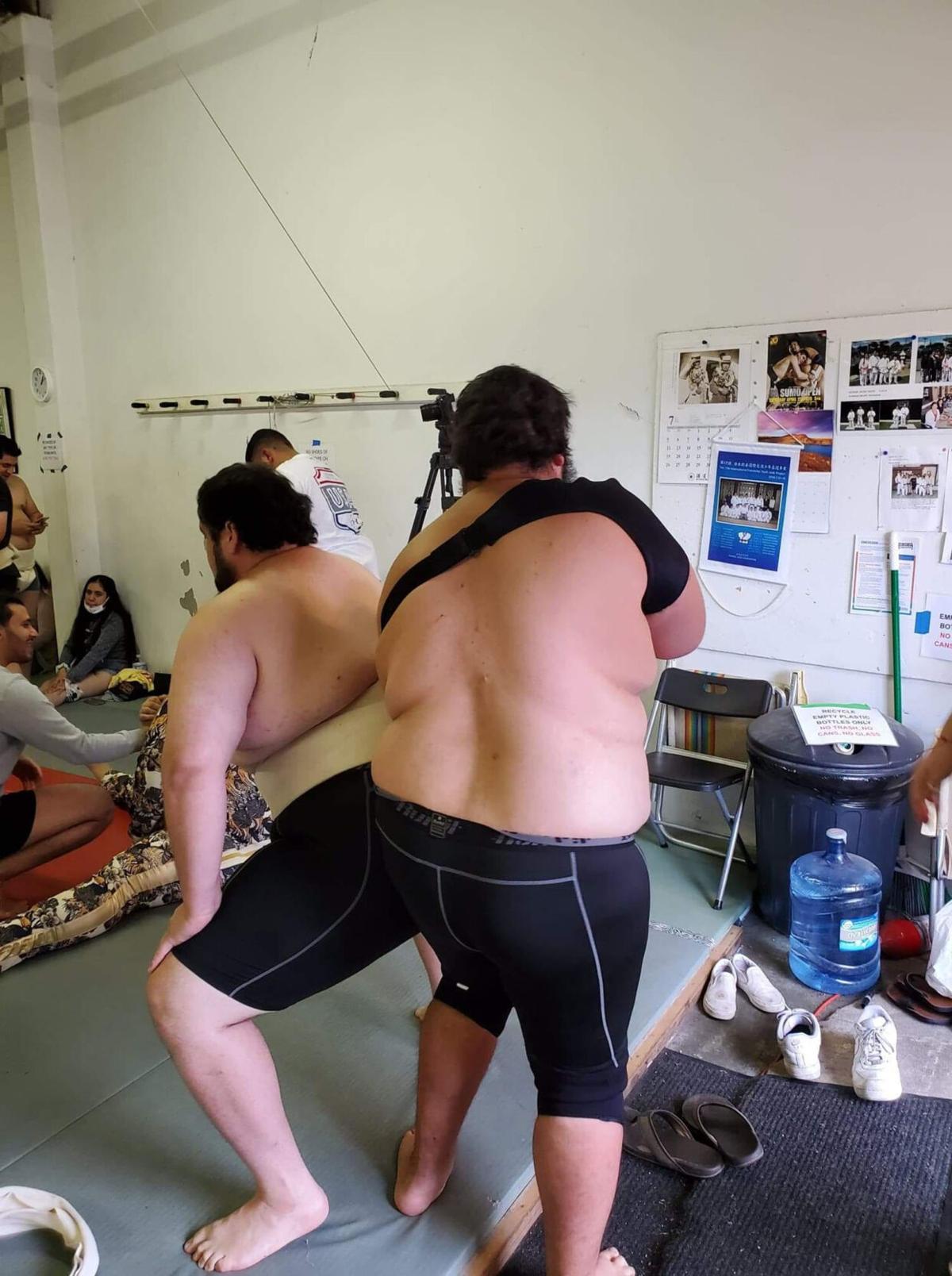 Angel De La Torre helps brother Gilberto adjust is belt, known as a mawashi, before a match at the 2020 U.S. Sumo Open. The brothers finished second and fourth respectively in the heavyweight division last Saturday. 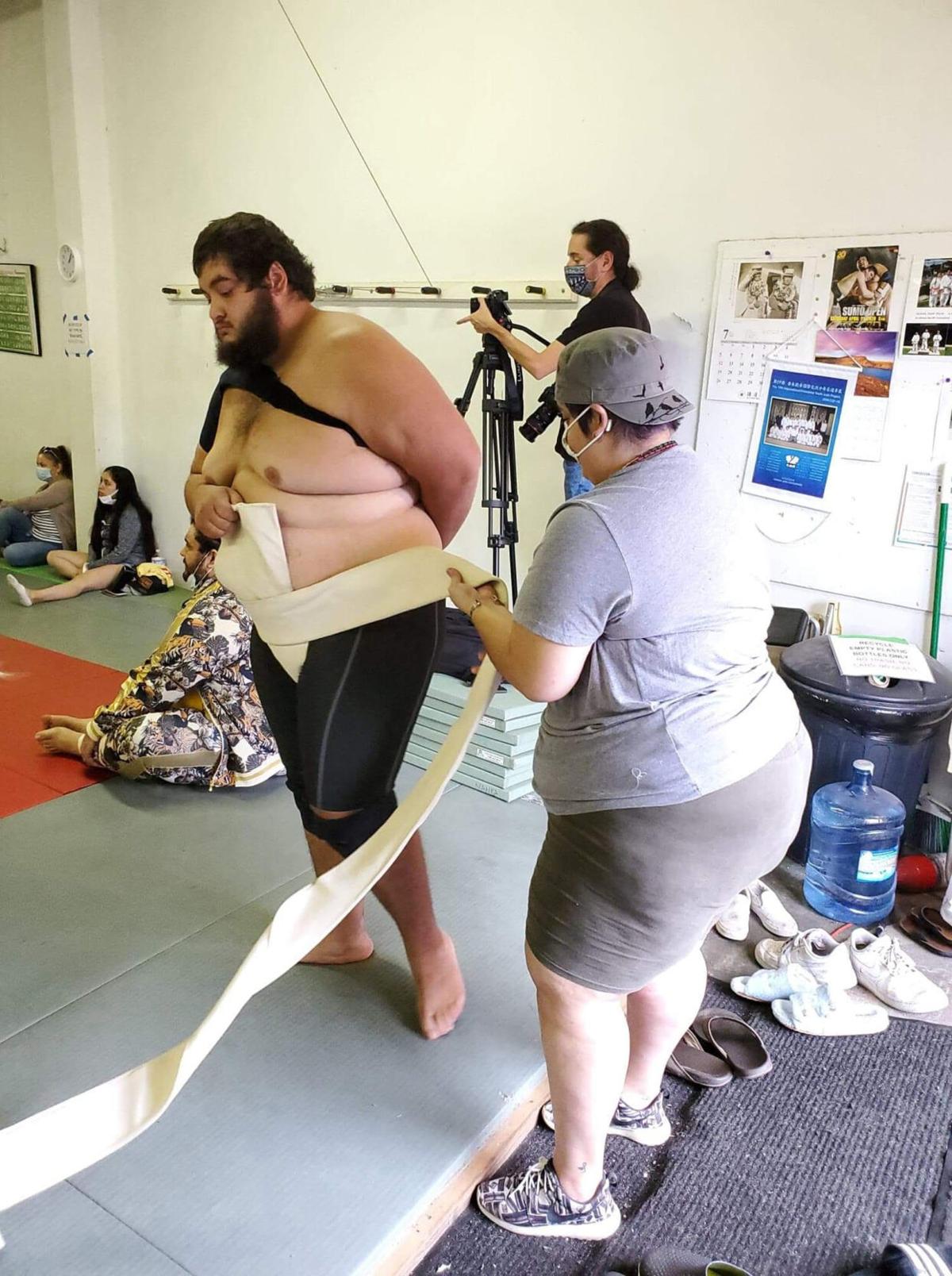 Angel De La Torre puts on his belt with help from sister Yazmin at the U.S. Sumo Open last Saturday.

Members of the De La Torre family celebrate a birthday in 2015. Brothers Angel (back row left) and Gilberto (back row, second from right) have recently taken up sumo wrestling to honor the memory of Sergio, seen standing next to Gilberto in a blue beanie. Sergio, who introduced his brothers to sumo, passed away in 2019.

Angel De La Torre helps brother Gilberto adjust is belt, known as a mawashi, before a match at the 2020 U.S. Sumo Open. The brothers finished second and fourth respectively in the heavyweight division last Saturday.

Angel De La Torre puts on his belt with help from sister Yazmin at the U.S. Sumo Open last Saturday.

Locking eyes from across the mat at the U.S. Sumo Open semifinals, Gilberto and Angel De La Torre can sense an outer-worldly presence looking upon them with pride.

On Oct. 24, the brothers, both Bakersfield natives, trekked to Carson to take part in the Sumo Open, one of the preeminent sumo wrestling events in the United States.

Though it's their first time taking part in a sanctioned tournament, the De La Torres' are doing quite well. They're even set to face off against each other in the semifinals of the men's heavyweight division, where the winner will earn a spot in the gold medal match later that day.

Both Gilberto and Angel say none of this would have been possible without older brother Sergio, who introduced them to the sport a decade ago.

A fan of the country's culture, Sergio was a frequent viewer of the Japanese network NHK, primarily watching for its cooking shows.

His interest broadened further when he stumbled upon a broadcast of a 15-day Grand Sumo Tournament. Considered Japan's national sport, the country hosts six such tournaments each year.

In time, Sergio got his brothers hooked as well. And when the national tournaments in Japan rolled around, it wasn't uncommon for Gilberto and Angel to watch all 15 days of action at their brother's house.

"We just fell in love with the sport," Gilberto said. "Little by little, we started looking up the rankings and the hierarchy and how the matches work."

It also generated a competitive spark. Both athletes in their time at Bakersfield High School -- Gilberto played football, Angel was a wrestler -- they began envisioning a future for themselves in sumo.

"I would see big people my size that were flexible and strong competing at championship levels," said Angel, a former 220-pound and heavyweight wrestler at BHS. "I thought I might be able to do it."

Eventually, the brothers did find their way to the mat, though they were driven there by tragic circumstances.

For years, Sergio had been battling multiple sclerosis. A debilitating disease known to create communication issues between the brain and the body, MS also causes deterioration of the nerves.

Despite fighting valiantly, the disorder proved too much for Sergio to handle. He passed away in 2019, just one day after his 34th birthday.

“His memory is still very impactful in our family," Gilberto said. "So we’re just trying to keep his name and memory (alive). Basically just trying to honor him any way we can with anything he liked.”

It didn't take long for the brothers to find the perfect outlet to honor Sergio's memory.

Shortly after Sergio's passing, Gilberto and Angel began training three to five days a week with hopes of eventually competing against other wrestlers. While they did regularly train at the Los Angeles Sumo gym, the brothers also sparred on a backyard mat they set up themselves.

After a year of training, the De La Torres got to put their skills to the test last Saturday, and were thrilled when they got the chance to square off with a shot at the U.S. Sumo Open finals on the line.

Said to have the superior stamina of the two, Gilberto has regularly gotten the better of his younger brother in their sparring sessions, saying he wins about 70 percent of the time (Angel contends the number is closer to 60).

But things were different last Saturday. Angel, the more powerful of the duo, got good position during an early attack and earned the win by pushing Gilberto out of the circle in just under 10 seconds. He ultimately earned a silver medal in the heavyweight division.

Though it was said to be good-natured, Angel says there was plenty of trash talk coming from his brother going into Saturday, and admits that added a bit of satisfaction to his victory.

"He was giving me a little bit of a hazing," Angel said. "He was like ‘I’m going to get first place, I don’t know about you, you’re ok with fifth or sixth.’ So I was pretty focused and motivated.”

By tournament's end, Gilberto, who finished the day in fourth place, says the trash talk had been turned around on him, not just by Angel, but also by siblings Yazmin and Javier, who accompanied them on the trip.

"There were saying I wasn't going to get a ride back to Bakersfield," Gilberto joked.

A few playful jabs notwithstanding, the day was a physical and emotional triumph for the family. Gilberto says it was all the more exciting to find success while surrounded by family members, even those who couldn't be there in person.

"Basically it was like we had five members of the De La Torre family there," he said. "It felt like (Sergio) was there. Whether we lost all our matches or we won all our matches, it was more of an honoring of our brother in spirit.”

Having gotten their first taste of success, the De La Torres will now attempt to make further strides on the national circuit, with Angel even expressing hope that he and his brother could eventually qualify for one of the Japanese Tournaments that first introduced them to the sport.

Whether or not they get that far, the ultimate goal was always to celebrate the memory of Sergio, a goal the De La Torres' say has already been accomplished.

"It was a wonderful thing.”