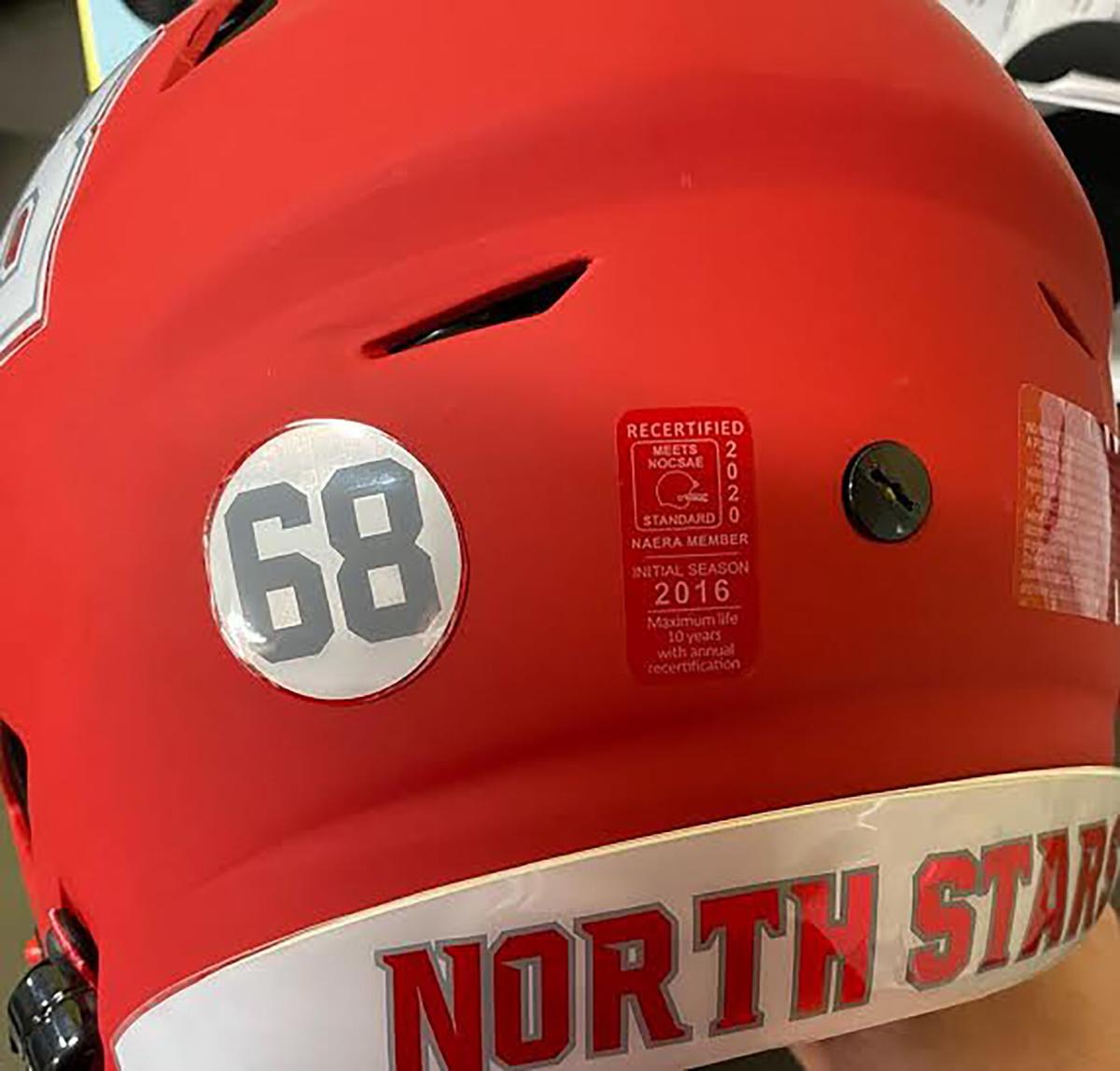 North High football players will wear a "68" decal on their helmets all season to honor former offensive lineman Wyatt Burch, who passed away in June. Burch was expected to be the team's starting right tackle this season. 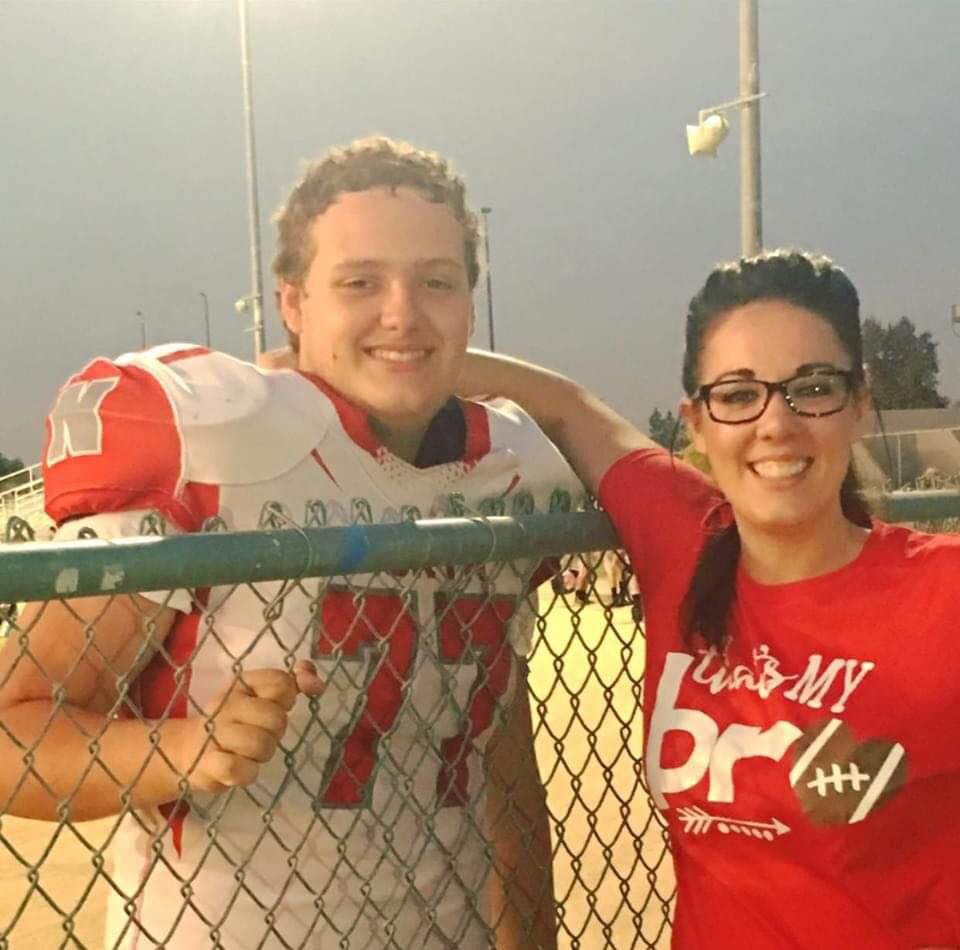 Wyatt Burch poses with sister Ashley Unruh after a 2018 football game. Burch, who passed away in June, will be honored by the members of the North High football team throughout the 2020 spring season.

North High football players will wear a "68" decal on their helmets all season to honor former offensive lineman Wyatt Burch, who passed away in June. Burch was expected to be the team's starting right tackle this season.

Wyatt Burch poses with sister Ashley Unruh after a 2018 football game. Burch, who passed away in June, will be honored by the members of the North High football team throughout the 2020 spring season.

After more than nine months of grieving, the pain of a devastating personal tragedy persists for Ashely Unruh.

Unruh and her family are still struggling to come to grips with the events of last June, when her brother, Wyatt Burch, began experiencing heat stroke and became badly dehydrated while on a hike in San Bernardino County.

Rushed to the hospital, doctors were unable to revive Burch, who passed away on June 22, just three days after his 17th birthday.

Having worked at home for much of the last year, triggering events started popping up for Unruh after she recently returned to work. Oftentimes, her commute would take her past the apartment Wyatt shared with their mother Shawn Burch (Shawn no longer resides there) and she says the emotional impact can often strike with fierce precision.

"Some days I'm just going on about my business and it hits me like a gut punch," Unruh says. "I just lose it. Every day's absolutely a challenge."

The challenge is being felt by everyone in Wyatt's life at the moment, as he would currently be preparing for one of his favorite times of year.

A three-sport athlete at North High School, Burch was particularly fond of football, where he carved out a starting role on the Stars' offensive line as a sophomore in 2019. He was expected to open the 2020 season as the team's starting right tackle.

And though he sadly can't be there, his coaches and teammates are going to great lengths to make sure his presence is felt throughout the season.

Burch, who was set to wear No. 68 this season, is being honored by North coaches, who've sewn "Burch 68" patches into the sleeves of their gameday attire.

Though no one will wear it in games, junior linebacker William Mudge, one of Burch's best friends on the team, is paying tribute by wearing Burch's No. 68 during practice, something he feels both honored and conflicted to be doing.

It's apparent that no one is feeling conflicted about wearing "68" helmet decals that North head coach Richie Bolin and his staff had made up. Normally not wanting to apply helmet stickers until the night before a game, Bolin's players insisted he fast-track the process this season.

"A couple days into practice, some of the seniors said 'Hey, we want the stickers now,'" Bolin said. "(Wyatt) had such an impact on our guys that they wanted them now."

The emotions of the last several months are likely to be ratcheted up further as the season progresses.

North is planning to hold a moment of silence for Burch prior to its April 1 home opener against Independence, where Wyatt's mother, sister, brother Kevin Burch and aunt Tracy Russell will all be present.

The Stars also plan to start every game this year by lining up without a right tackle and taking a knee on their first offensive play. They'll do this for the first time Friday, when they open regular season play at Highland.

Though some, himself included, may struggle to shake off the emotion of the moment and focus on a football game, Bolin says he's willing to do anything to honor a player who was so well-liked in the Stars' locker room.

Mudge, who says he tends to get angry when confronted with sad emotions, thinks the tribute could provide additional motivation for a players competing with such heavy hearts.

"I'm just waiting for that time when kickoff happens," he said. "I just want to go out and hopefully win the game for him."

This football season, and those that follow, will be particularly tough on Burch's family, who all took great pleasure watching him in the heat of competition.

But Unruh, a former classmate of Bolin's at North High, says the lengths he and his staff have gone to to celebrate Burch's life are, ever so slightly, easing some of her pain, believing their efforts are helping to keep part of him alive.

“It means everything," Unruh said. "It means that Wyatt is living on through everyone he touched. It means that his memory is not going to fade. It means that, as long as we still have people who are saying my brother’s name and remembering him and honoring him, he lives on. Even though he was taken way too soon and it’s absolutely devastating, it means everything that he made such an impact.”