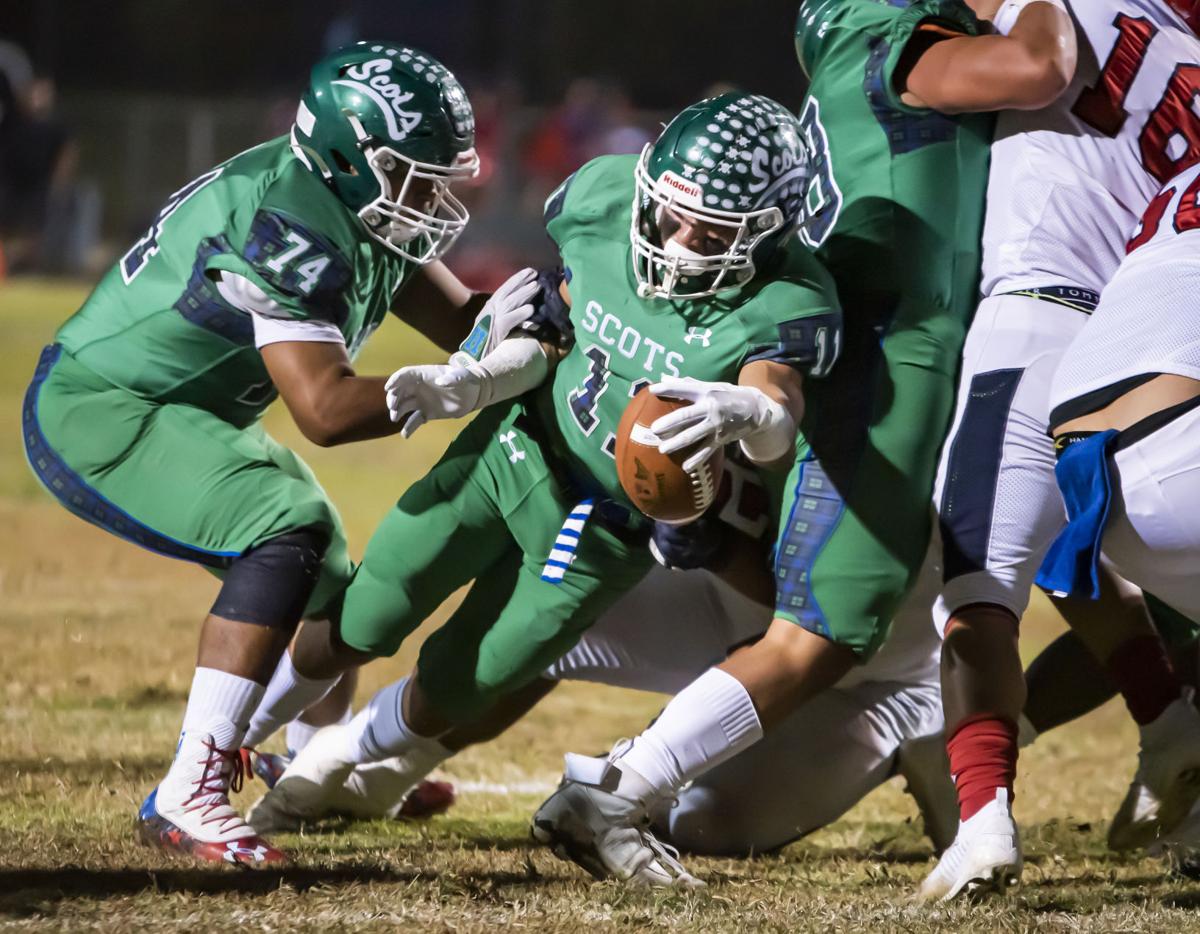 Nick Salas from Highland (11) reaches over the goal line to give Highland the first lead of the game in the first quarter against East High School on Friday night. 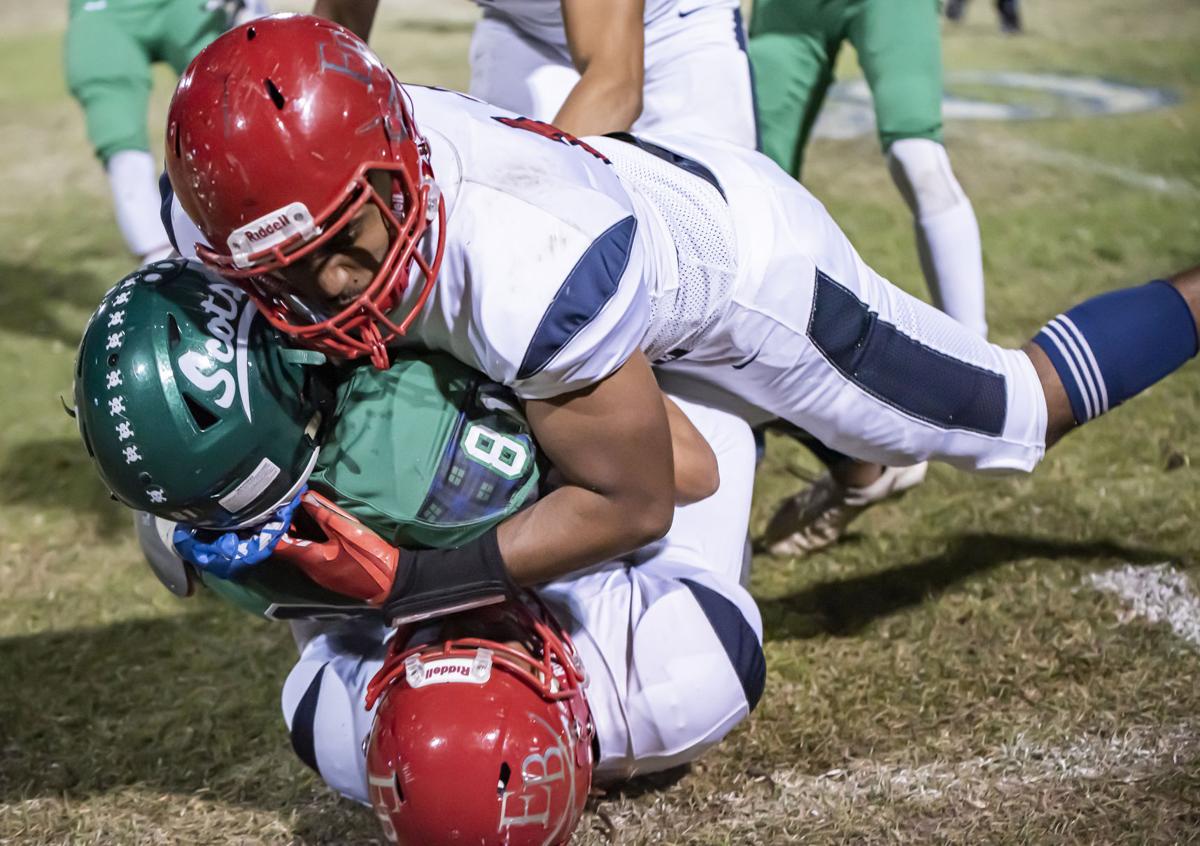 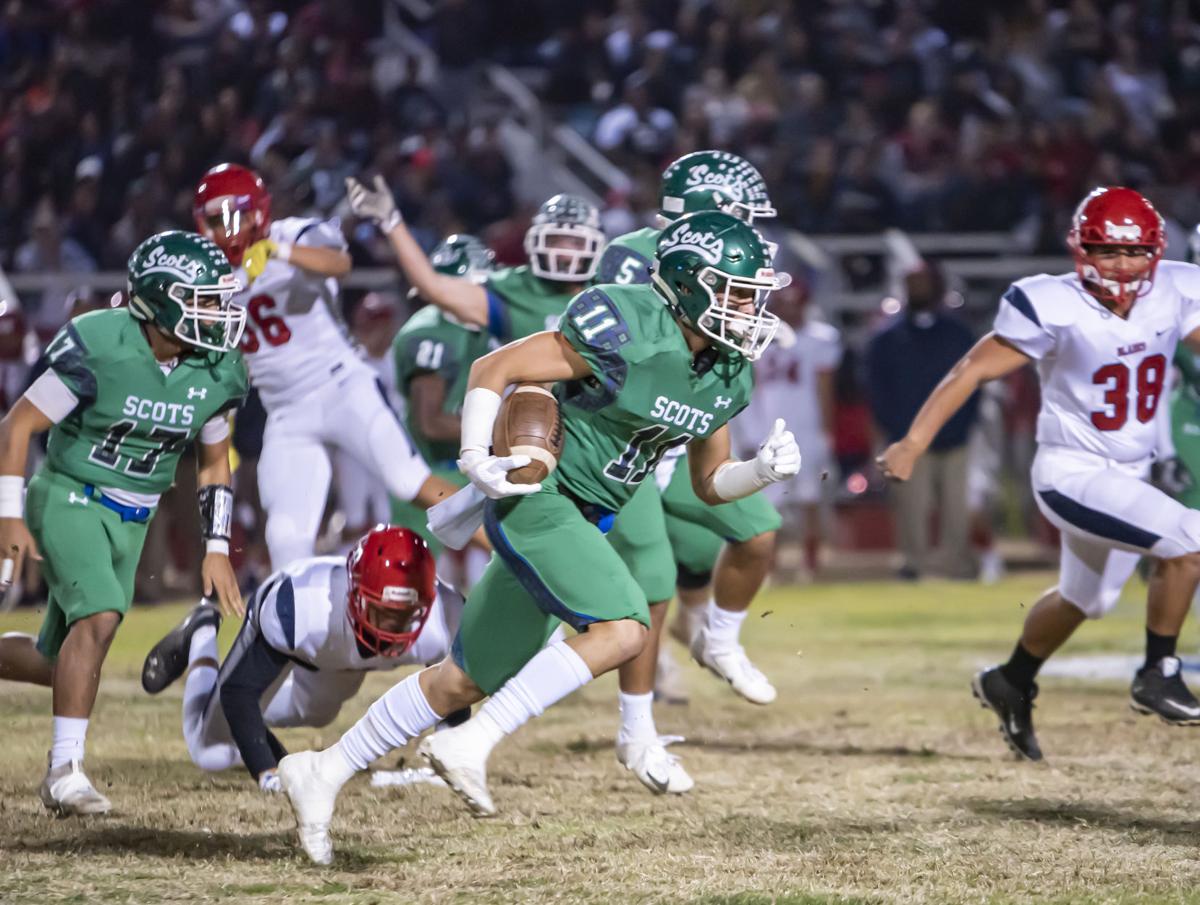 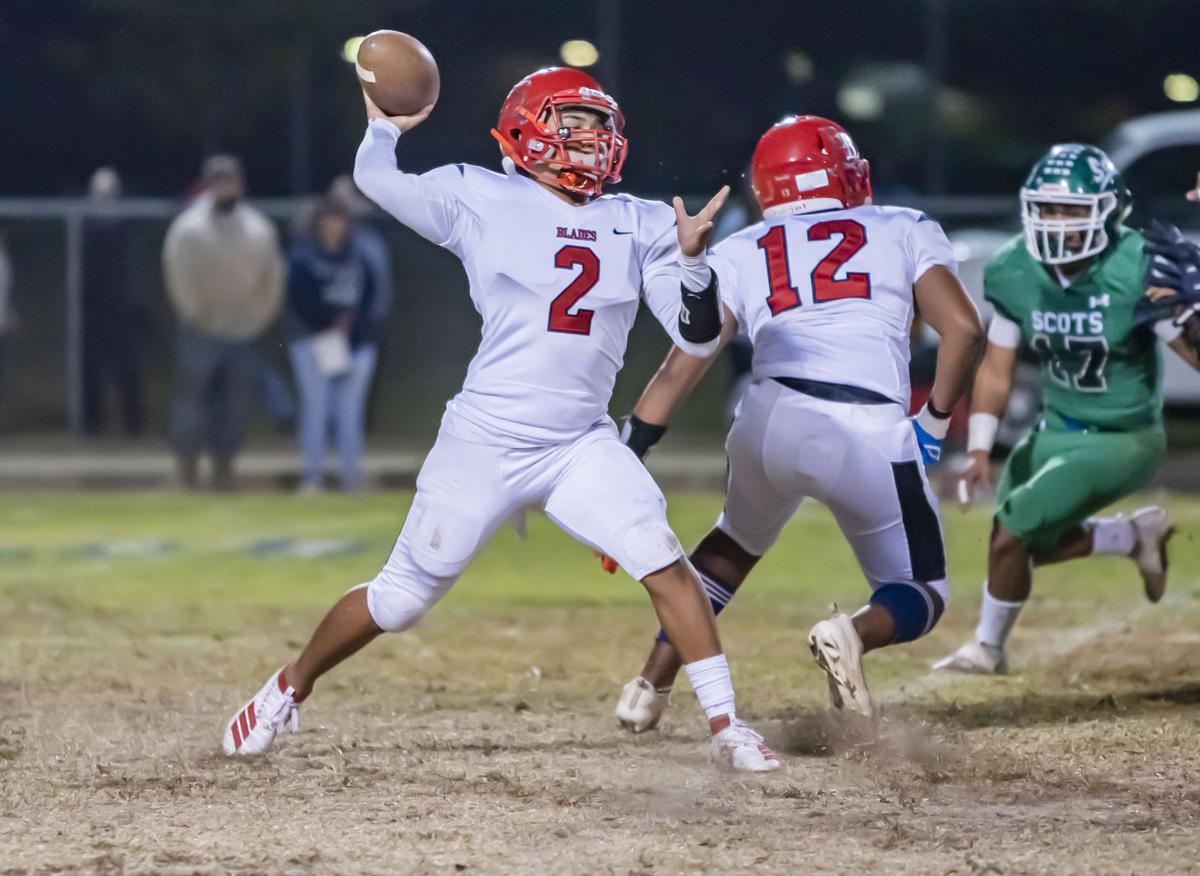 Willie Ball (2) goes back for a pass during Friday night football action against Highland. 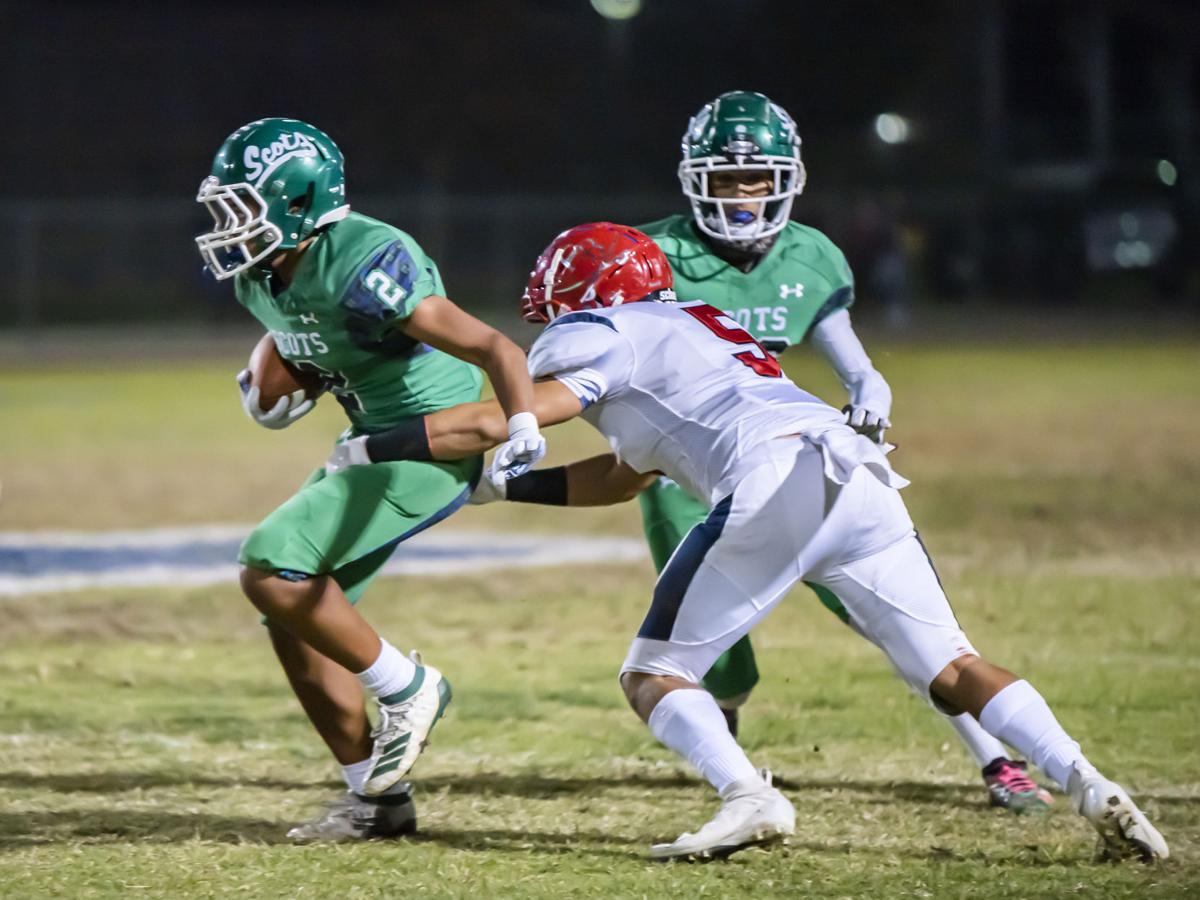 Nick Salas from Highland (11) reaches over the goal line to give Highland the first lead of the game in the first quarter against East High School on Friday night.

Willie Ball (2) goes back for a pass during Friday night football action against Highland.

In the 49-year history of Highland High School, the Scots have had plenty to celebrate athletically.

The football program, however, has not.

Despite the recent run of success, the Scots only have one league championship to their name, the 2017 Southeast Yosemite League title, but that was shared three ways with North and South. They had yet to win a league title outright, until Friday.

“Our guys worked so hard,” said Highland head coach Michael Gutierrez. “They’ve been so fun to coach. All the bumps, bruises, pain and anger all pays off tonight. It’s good to see those guys play so hard and enjoy this now.”

The Scots seemed rattled early on, as Cleveland fumbled two of the first three snaps he saw, but it was the defense that got Highland (9-1, 5-0 SEYL) back on track.

On East’s (7-3, 3-2) second play from scrimmage, quarterback Willie Ball was crushed by a Highland defender and lost the football, which was recovered by Cameron Romero. The Scots would capitalize on the prime field position with a 1-yard rushing touchdown by Nick Salas.

On the next Highland possession, Dizzy Brown would pick up a key 15-yard rush and end it himself with a 7-yard score. Brown finished with 97 yards on the ground on 9 carries.

“Our guys played well,” Gutierrez said. “We told them before the game if you make plays on offense, defense and special teams, you will win this game.”

Highland was without a few of their players, including star wide receiver Shabazz Muhammad, who was held out of the game for disciplinary reasons. The wide receiver's absence was easily filled by Chris Gutierrez, who scored Highland’s third touchdown of the first half on a fourth-and-long play that saw him scream across the field and catch the ball in stride into the end zone. Gutierrez also had a key 18-yard catch that saw him drag an East defender down the field with him following the reception.

“They’re still with us, the admin just felt they shouldn’t play tonight but they’re still in good standing with us,” Gutierrez said. “It’s great to see how our guys played without them and we’re excited to get them back next week.”

After an abysmal first half that saw Ball get sacked three times on the final drive of the first half by Cameron Romero, who finished the game with five sacks, East finally answered the bell to start the second half. Nate Martinez, who only saw three carries in the first half, surpassed that on the Blades’ second half opening drive, and capped it off with a huge 19-yard rumble where he trucked a Highland defender and seemingly jogged into the end zone to put East on the board and make the score 21-6.

But the Blades would squander a scoring opportunity on their next drive and Highland would respond after that. Cleveland found Salas streaking down the sideline, who fought to cross the goal line for a 28-yard passing touchdown.

Highland would ice the game following a fumble recovery by Dominic Rountree, who would then cap off the drive himself with a 5-yard rushing score.

The Blades went up against the Scots Friday night. Final score: Highland 35, East 6.