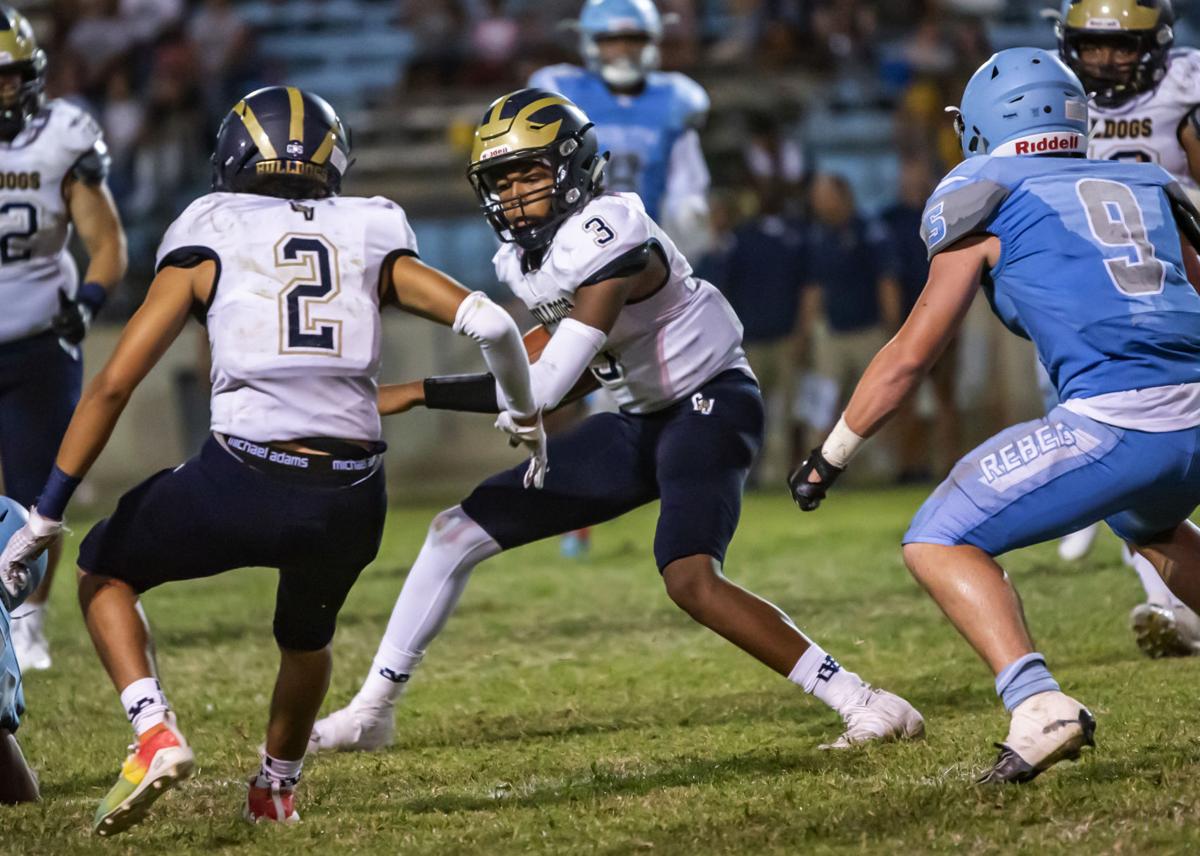 Marquel Bruley (3) from Golden Valley runs for a short gain against South High on Friday night. 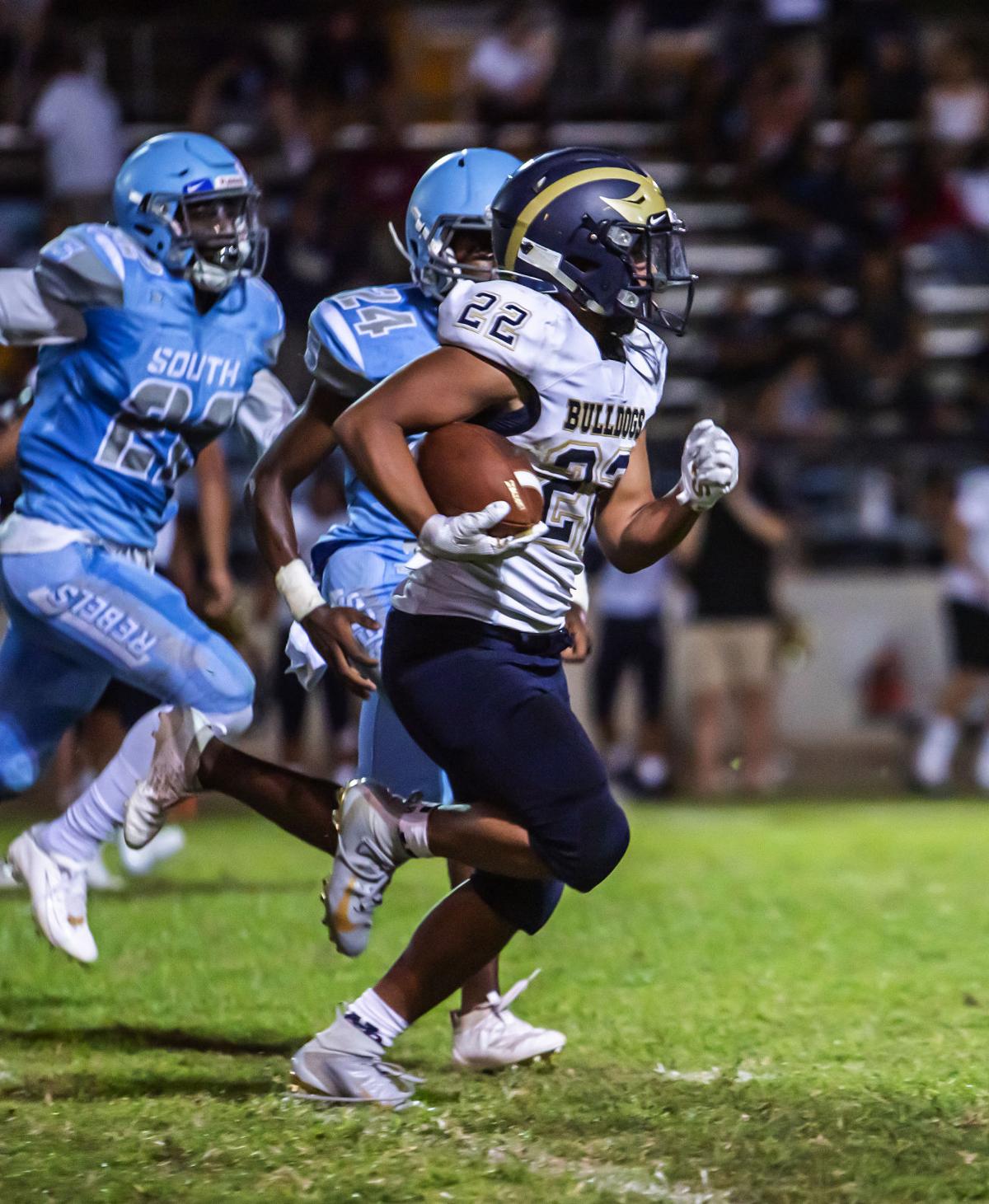 Bulldogs running back Iziah Coronado (22) runs for a large gain against South on Friday night. 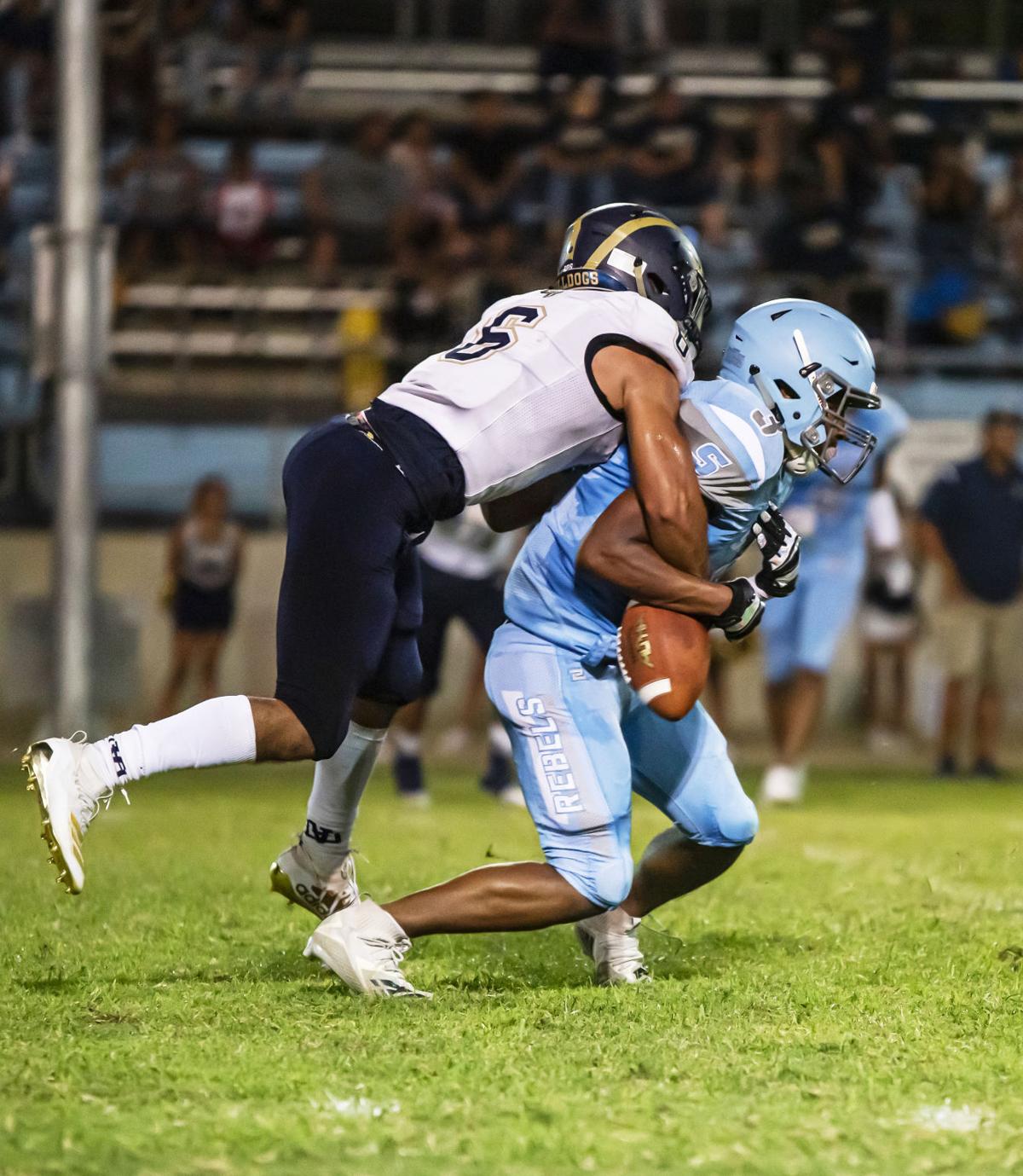 Giolden Valley Bulldogs Donovan Valdovinos (6) strips the ball from King Ellis (3) from South for an incompletion. 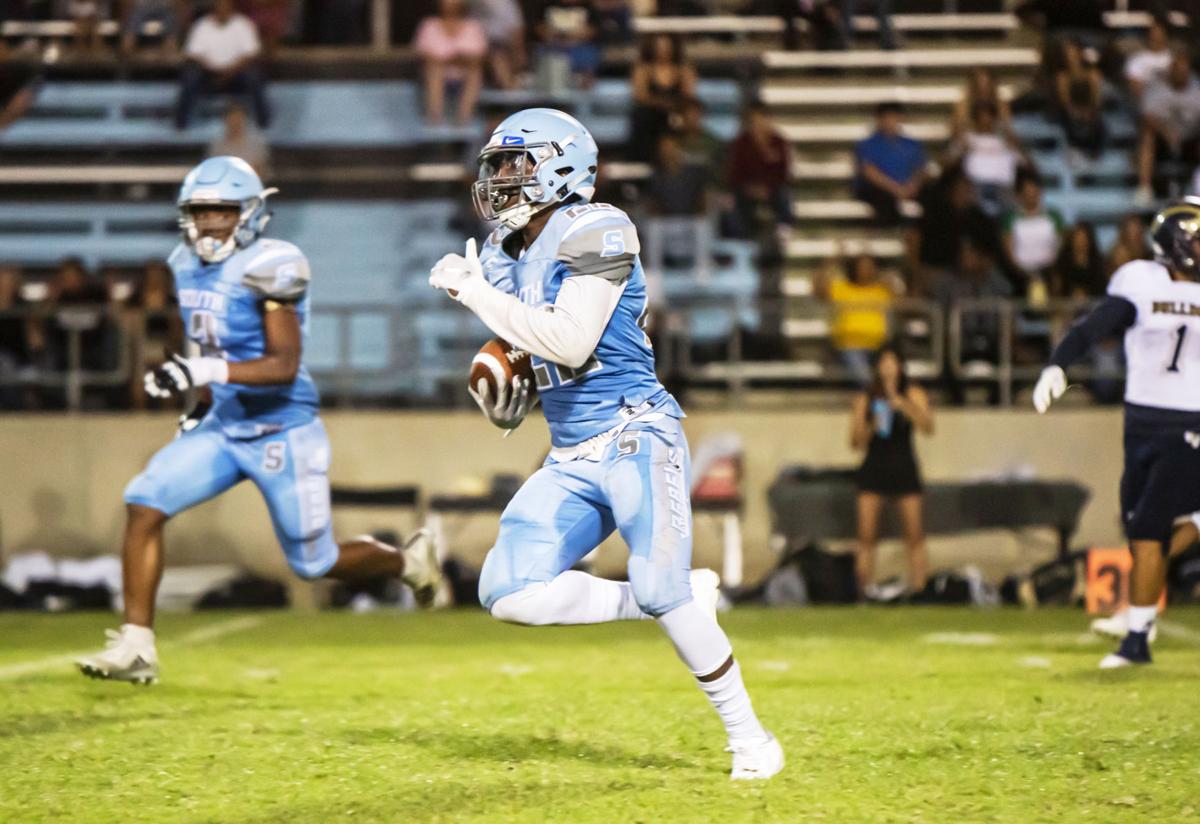 Daniel Lomax Jr. has been a key contributor in South High's 3-1 start to the season. 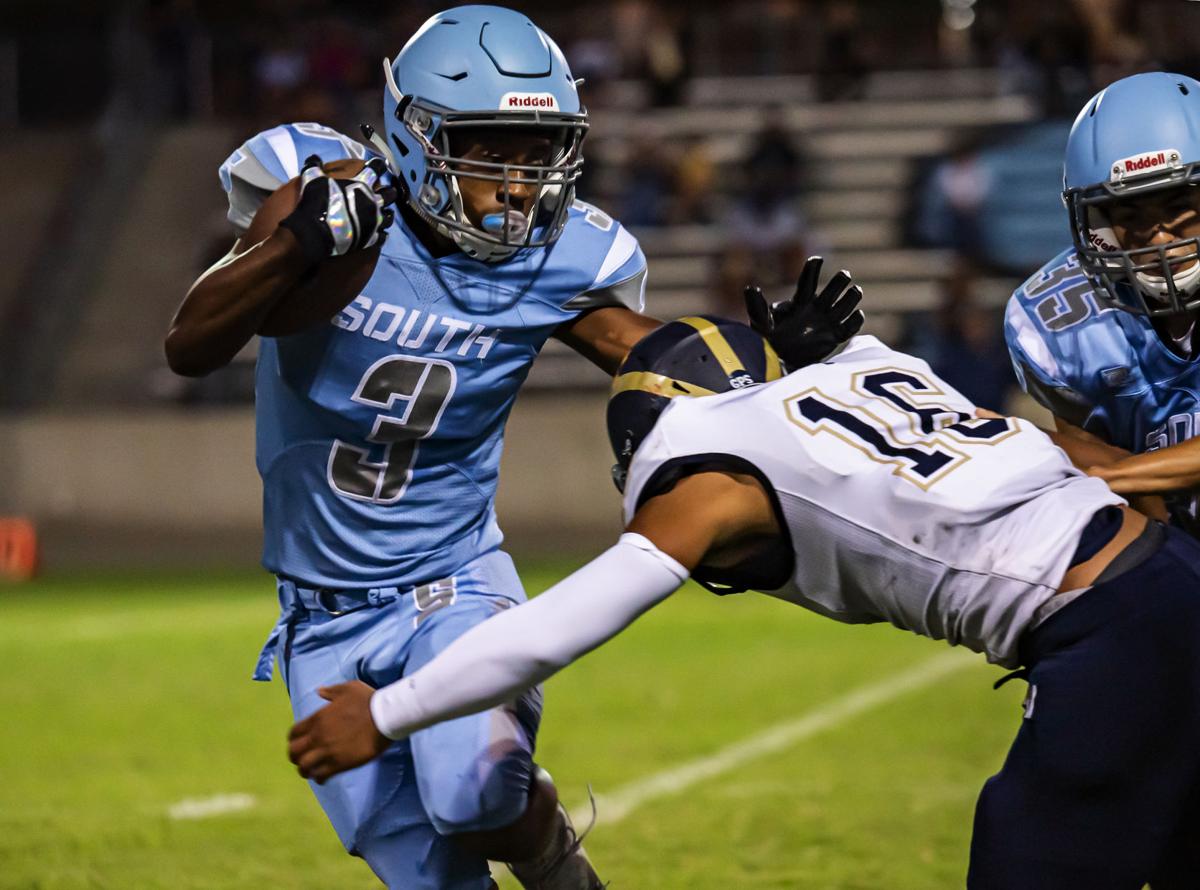 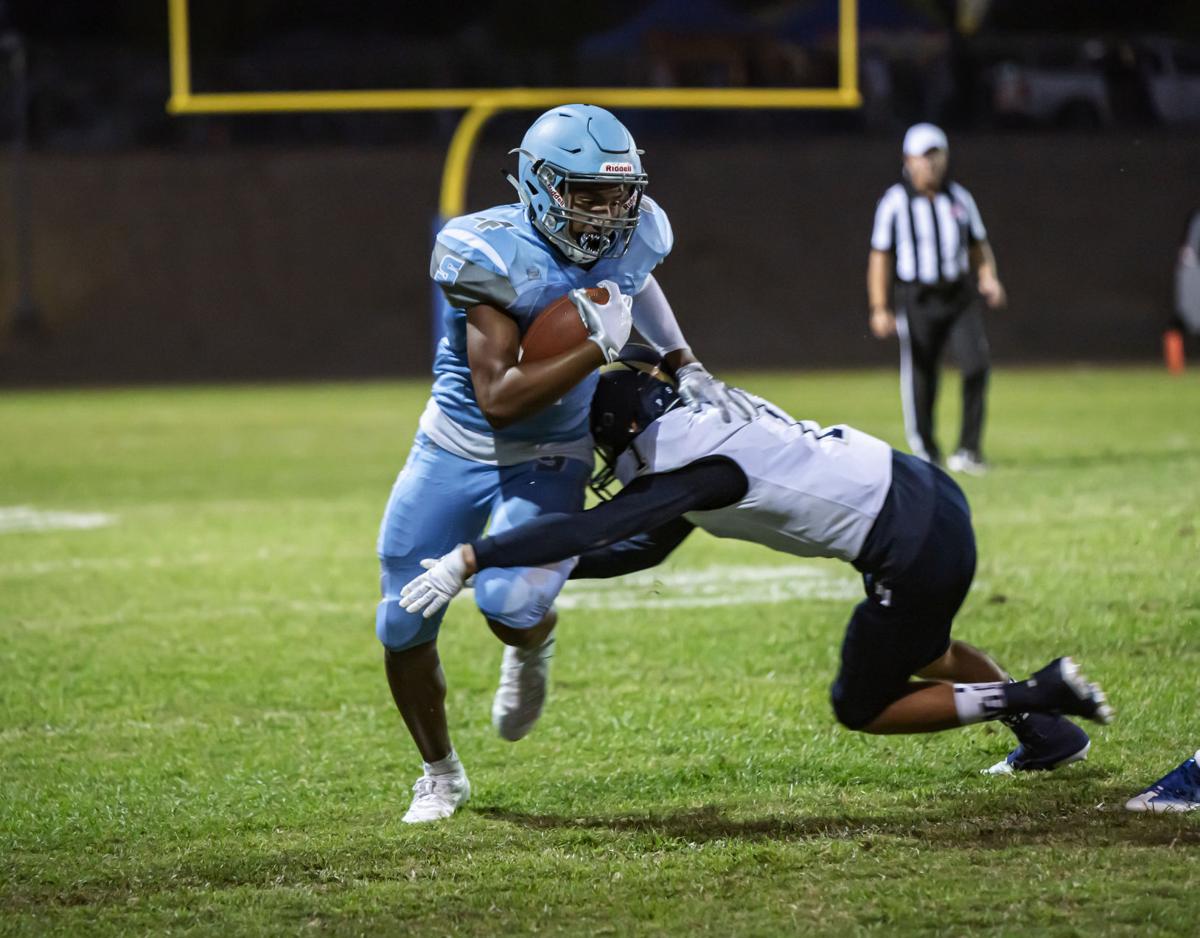 Angel Alferes (4) runs with the ball against Golden Valley on Friday.

Marquel Bruley (3) from Golden Valley runs for a short gain against South High on Friday night.

Bulldogs running back Iziah Coronado (22) runs for a large gain against South on Friday night.

Giolden Valley Bulldogs Donovan Valdovinos (6) strips the ball from King Ellis (3) from South for an incompletion.

Daniel Lomax Jr. has been a key contributor in South High's 3-1 start to the season.

Angel Alferes (4) runs with the ball against Golden Valley on Friday.

It was a celebration more than 22 months in the making for the Golden Valley football team.

The Bulldogs took advantage of South mistakes in the first half, then held on in the second, ending a 12-game losing streak that dated back to Nov. 3, 2017 with a 21-6 road win on Friday night.

The Bulldog defense got the scoring started late in the first quarter, when defensive end Ernesto Romero made a perfect read on a bubble screen, intercepting a Manny Guzman pass and racing untouched for a 16-yard touchdown.

“I thank my (defensive) coach. He prepared me for everything,” Romero said. “He said ‘you’re not going to see him, they’re going to come out of the backfield, you’ve just got to be ready.’ And just like he preached, I saw him, I saw the ball and I just grabbed it.”

Golden Valley’s first offensive touchdown came after South made a huge gamble and attempted a fake punt run on 4th-and-21 from its own 30. The attempt gained no yards.

Just three plays later, Marquel Bruley and Richard Salcido connected for a 5-yard touchdown, stretching the lead to 14-0 after a two-point conversion.

After turning the ball over twice and dropping a pass that would have been a fourth-down conversion, the Rebels appeared to finally catch a break in the final minute of the first half, when Daniel Lomax Jr. broke a tackle and sprung free for a 50-yard touchdown catch-and-run.

But moments after the confetti cannon had been fired, officials called the play back, ruling that a Rebel offensive lineman was illegally down field.

Lomax Jr. found the end zone again, and this time it counted late in the third quarter, as he took a pitch and raced along the left sideline untouched for a 72-yard touchdown scamper.

But miscues continued to plague the Rebels, and eventually helped seal their fate.

Two plays after a questionable unsportsmanlike conduct penalty moved the ball back from the 10 to the 25, South looked to recover, as a third down connection between Guzman and Angel Alferes set up first-and-goal from the 8.

But on the ensuing play, a fumbled exchange on the handoff was recovered by Romero, who came exploding into the backfield.

After two more 15-yard flags were thrown on the Rebels, Iziah Coronado sealed the win with under a minute to play, as he broke loose for a clinching 36-yard touchdown run.

“I was speaking to existence that I was going to make a touchdown this game,” said Coronado, who finished with 125 yards rushing. “And I did what I said.”

For first-year coach James Cain, his first varsity win was made sweeter by the fact that his players overcame major adversity after controlling the game most of the way. And with that elusive first win out of the way, he expects much better things for the program.

“It feels good to get that monkey off their back,” Cain said. “They never stopped fighting, they never stopped believing. We knew that we were going to have some bad stuff, some controversy. We can’t give into it like we did in the past.

“Tonight was a challenge for them, they pushed up against it. I’m going to let them enjoy it for the weekend, but I’m also going to remind them, ‘What did we do to get that first win?’ Let’s not stop doing those things.’”

In a scary moment, South’s Kaleb Peebles had to be taken out of the stadium in an ambulance in the second half, following a neck injury he sustained in the second quarter.

“He was moving his arms and legs,” coach Cary Mills said. “He was just having some odd pains in the back of his head and down his spine. He walked off the field then he said ‘My head hurts, I’m seeing stars.’ He got on the bench and it really started to intensify then.”