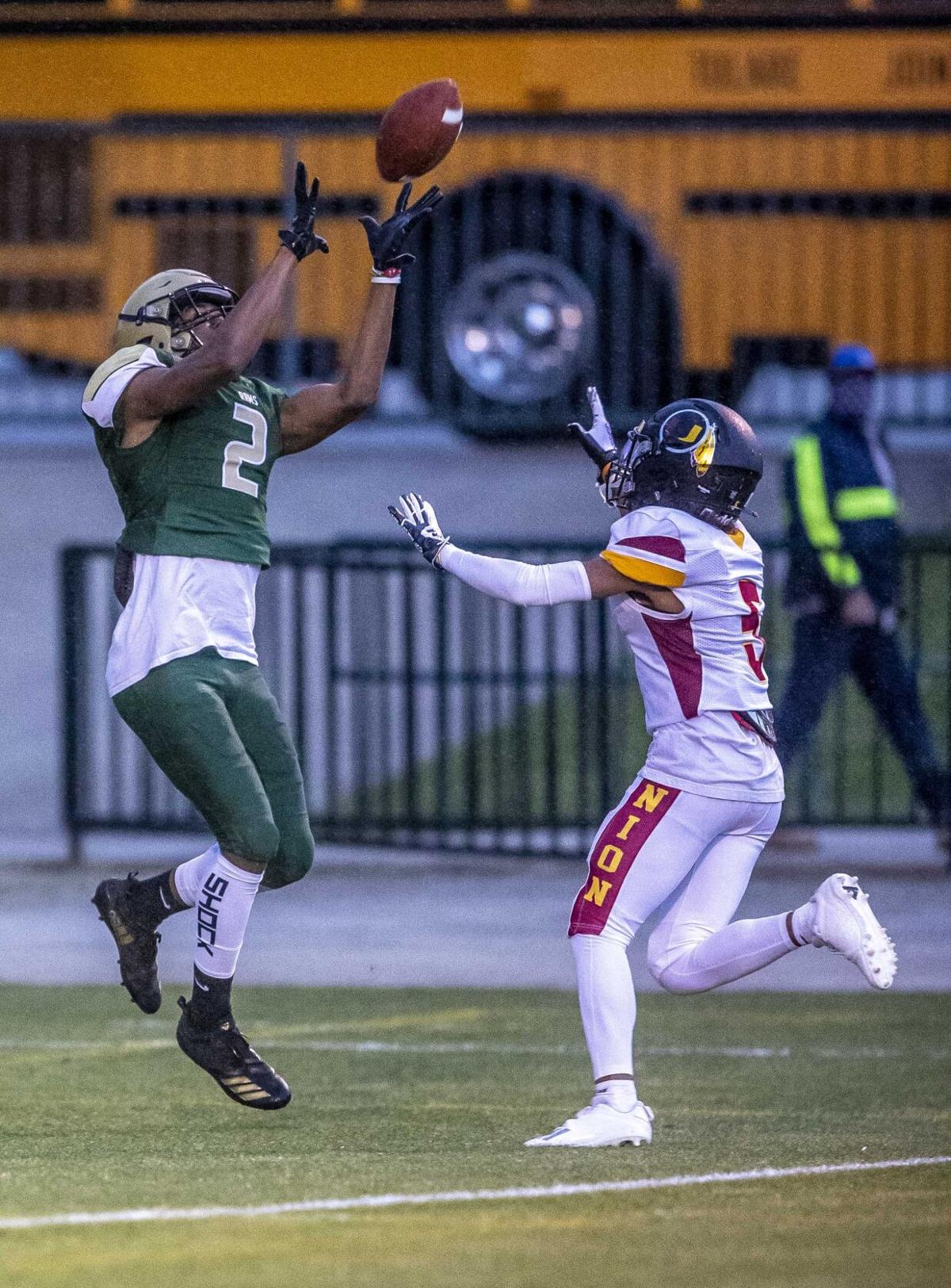 Garces' receiver Loren Johnson (2) pulls down a catch for a touchdown as Tulare Union's Daylen Sanchez defends during a March 19 game. The Rams will host nationally ranked Sierra Canyon Saturday. 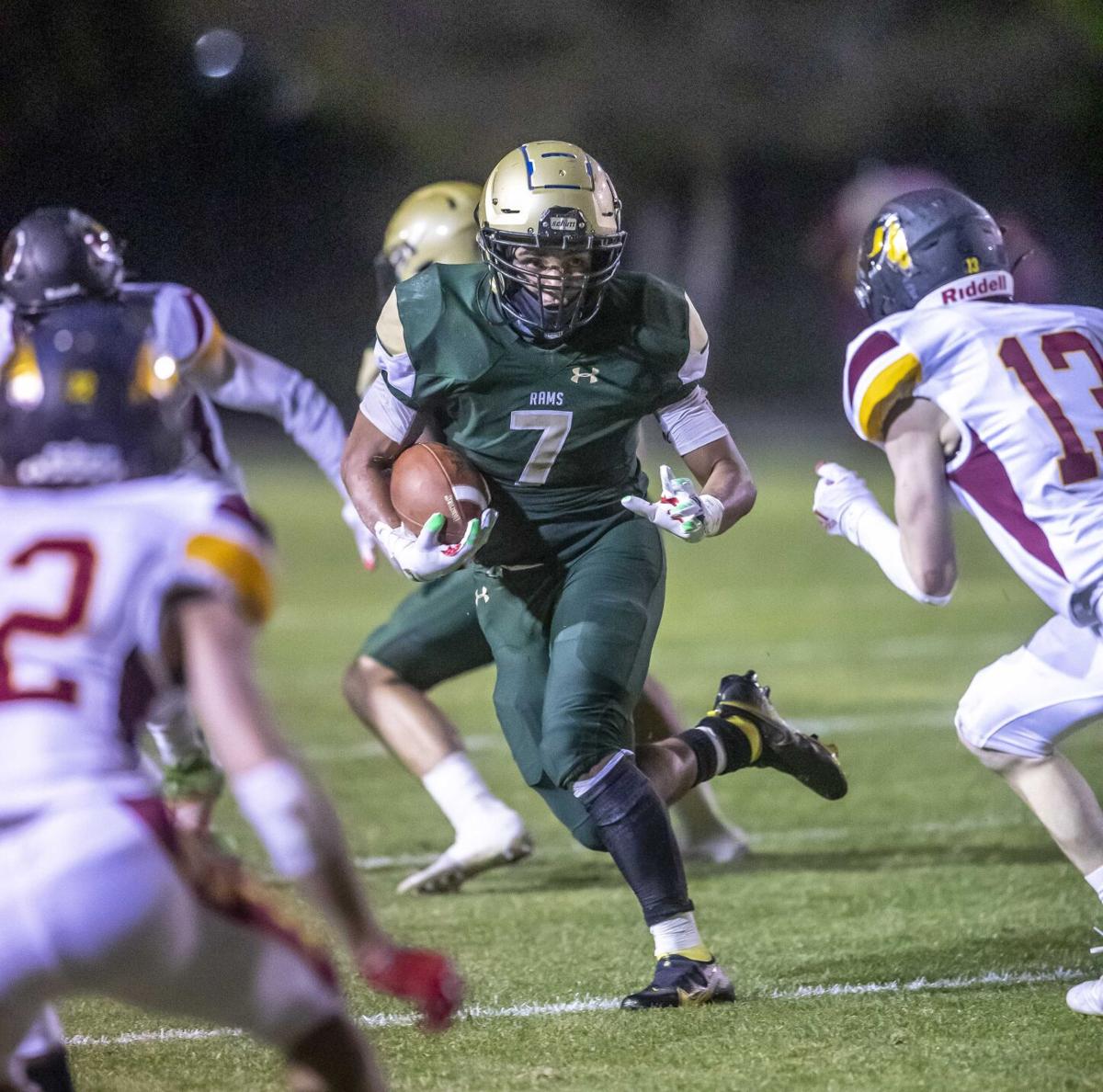 Garces  running back Jalen Smith (7) breaks through Tulare Union's line for a gain during a March 19 game. Smith and the Rams will have to contend with a Sierra Canyon defense that's pitched two consecutive shutouts on Saturday.

Garces' receiver Loren Johnson (2) pulls down a catch for a touchdown as Tulare Union's Daylen Sanchez defends during a March 19 game. The Rams will host nationally ranked Sierra Canyon Saturday.

Garces  running back Jalen Smith (7) breaks through Tulare Union's line for a gain during a March 19 game. Smith and the Rams will have to contend with a Sierra Canyon defense that's pitched two consecutive shutouts on Saturday.

When scheduling opponents outside of Kern County, Paul Golla isn't exactly a fan of the safe approach.

While at Bakersfield High School, Golla, who left the Drillers to take the reigns at Garces Memorial in 2019, made a habit of putting his teams up against some of the best competition the state had to offer.

In 2006, he scheduled a season-opening game against a Sacramento-Grant team that ended up going 13-0. He also scheduled games against perennial powers Long Beach Poly in 2010 and Westlake Village-Oaks Christian in 2013.

All three of these games ended in losses.

He hasn't softened his approach at Garces, and a brutal spring slate will present its toughest challenge on Saturday, when the Rams host a Sierra Canyon team that comes in not only ranked third in the state, but 23rd in the entire country in a poll released by Cal Preps.

After a 42-21 season-opening loss to St. John Bosco, a team ranked second in the state and fourth nationally by Cal Preps, the Trailblazers responded by winning their next two games by a combined mark of 98-0.

A Garces defense that allowed nearly 500 yards in a 48-42 loss to La Canada-St. Francis last Saturday will have to contend with a balanced Sierra Canyon offense that had a 100-yard rusher in Jason Jones (139 yards and two touchdowns) and a 100-yard receiver in DJ Harvey (137, two touchdowns) in a 42-0 rout of Oaks Christian on March 26.

With the likes of Ezekiel Larry, who had four sacks in a 56-0 win over St. Bernard, the Trailblazer defense also presents a major challenge for a Ram offense that turned the ball over four times a week ago.

"They have depth everywhere," Golla said. "They're very well-coached, and they're clicking early because they've returned a lot of kids from previous years. They're really good."

So why bring such a loaded team to your place when so many easier options were available? Well, that's a very easy question for Golla to answer.

"That's what we want our program to be," he said. "As a coaching staff, as players, this is the level you want to play at. Your ultimate goal is to be the best you could possibly be. How do you know you're going to be the best until you play the best?"

This brutal approach to scheduling would often pay major dividends during Golla's run at BHS.

Though the first go-arounds with Grant, Poly and Oaks Christian ended with losses, Golla's Drillers eventually beat all those teams in rematches. They topped Grant 28-21 in 2007, beat an eventual Southern Section-winning Poly team 28-6 in 2012, and defeated Oaks Christian 34-21 in 2014.

And though his rematches have traditionally proven more successful than first meetings in such matchups, Golla isn't ready to wave the white flag and be content with merely competing Saturday.

Despite some ugly stretches in last Saturday's loss, the Rams (1-1) are still chock-full of Division-I talent and just two weeks removed from a 43-6 throttling of a talented Tulare Union team.

And in a year with no postseason, Golla says his players are as eager as ever to see how they stack up with one of the best teams in the entire country.

"We want to see where we are," he said. "We have a good football team. We have some great kids and I think everybody's excited for this opportunity."