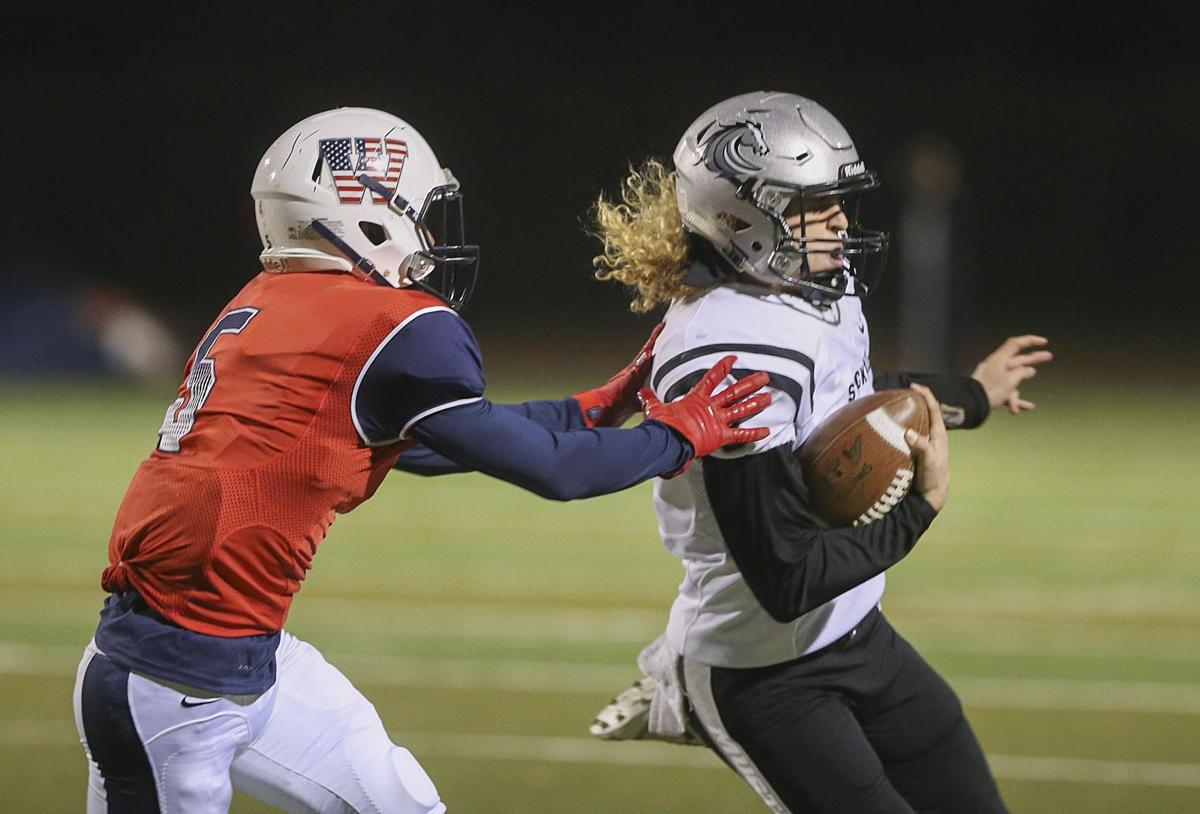 Stockdale's Evan Burkhart is pushed out of bounds by Tulare Western's Mikey Fisher in first half action of the Division II Central Section football playoff at Bob Mathias Stadium in Tulare in 2018. 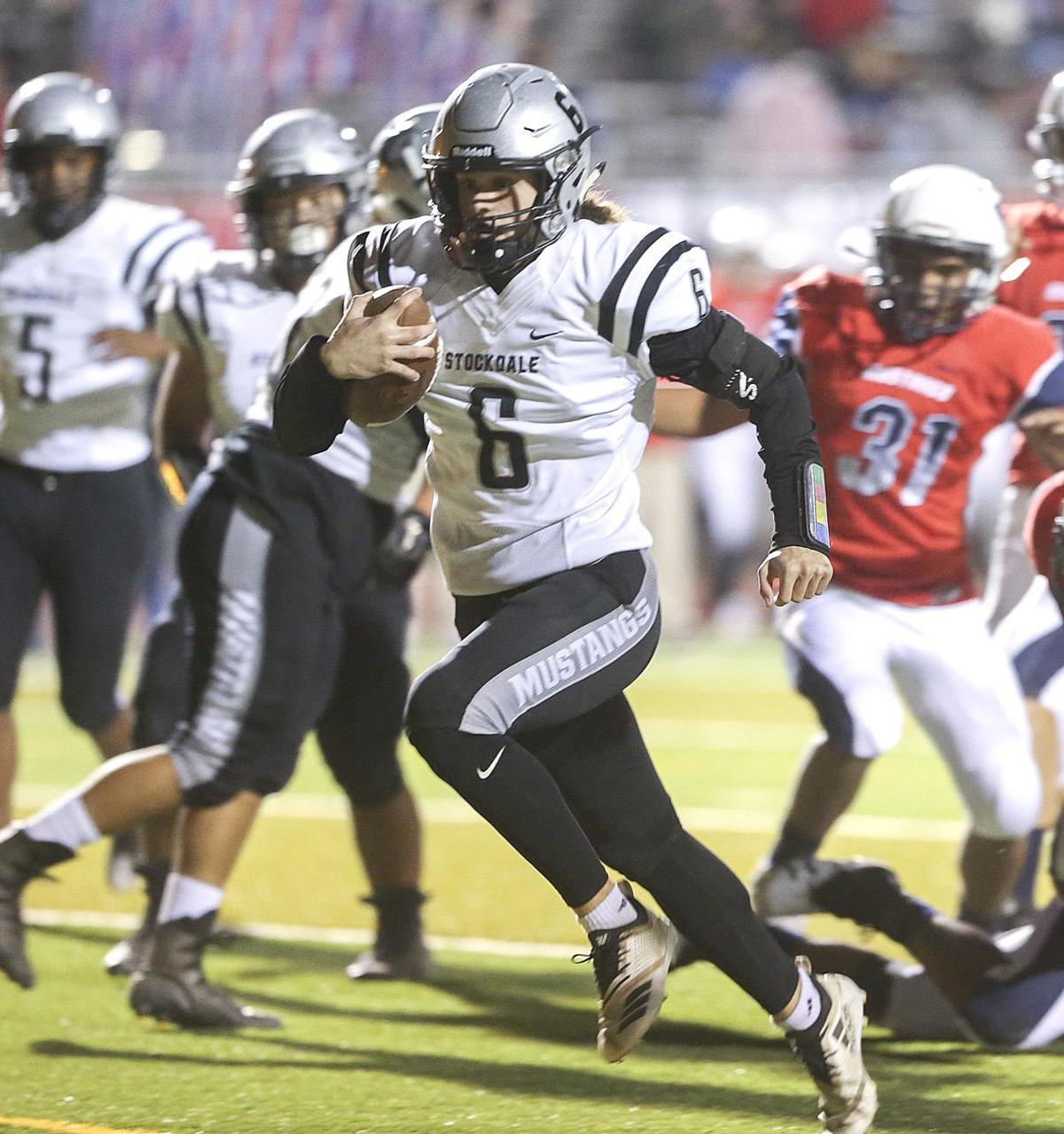 Stockdale's Evan Burkhart goes in for a first half touchdown against Tulare Western in the Central Section Division II Central Section football playoffs at Bob Mathias Stadium in Tulare last November. Burkhart missed his senior year with a torn ACL in his left knee. 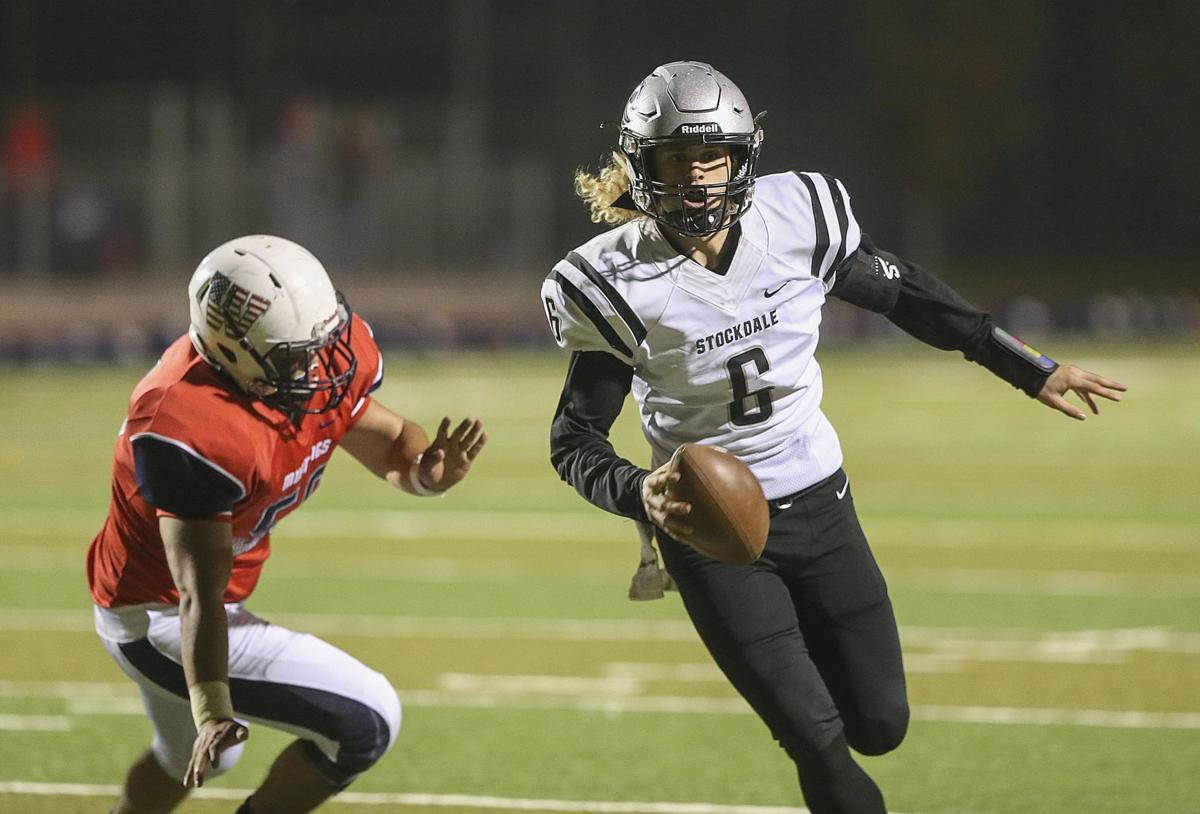 Stockdale's Evan Burkhart gains big yards as the Tulare Western defense chases him down in the Division II Central Section football playoff at Bob Mathias Stadium in Tulare in 2018. 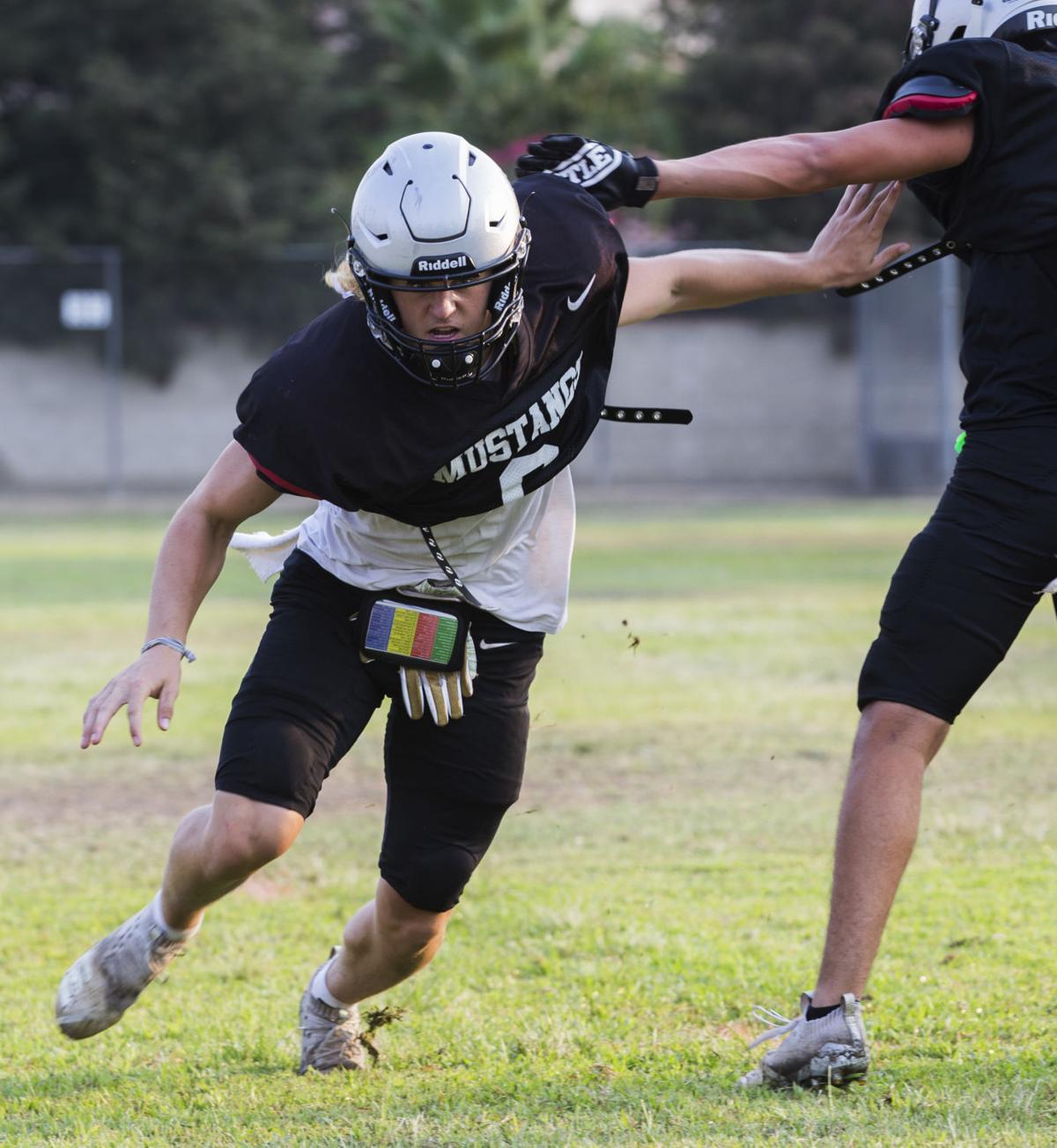 Evan Burkhart runs through preseason drills for Stockdale football in 2018. 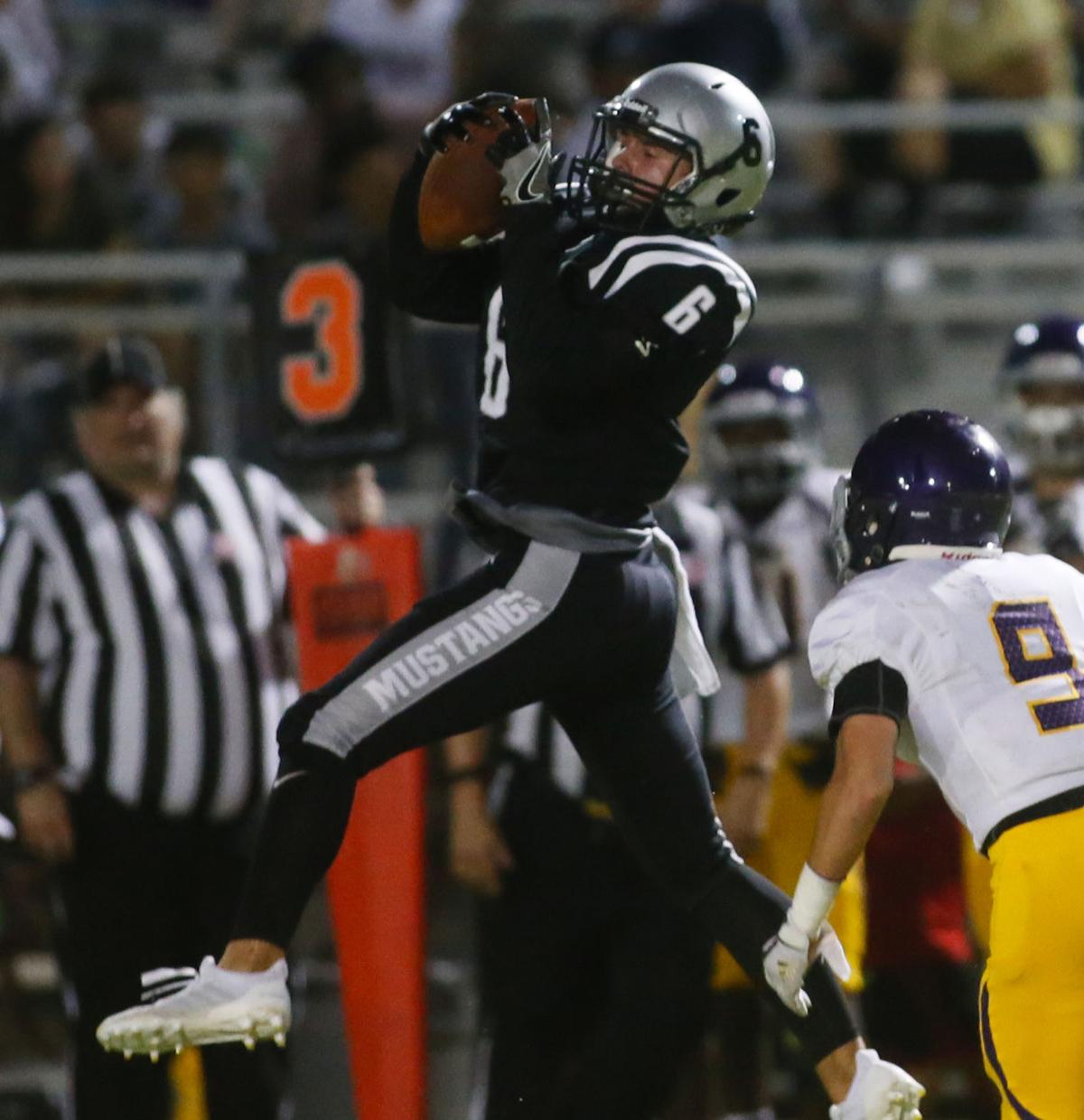 Stockdale's Evan Burkhart pulls down a short pass last year against Ridgeview in 2017.

Stockdale's Evan Burkhart is pushed out of bounds by Tulare Western's Mikey Fisher in first half action of the Division II Central Section football playoff at Bob Mathias Stadium in Tulare in 2018.

Stockdale's Evan Burkhart goes in for a first half touchdown against Tulare Western in the Central Section Division II Central Section football playoffs at Bob Mathias Stadium in Tulare last November. Burkhart missed his senior year with a torn ACL in his left knee.

Stockdale's Evan Burkhart gains big yards as the Tulare Western defense chases him down in the Division II Central Section football playoff at Bob Mathias Stadium in Tulare in 2018.

Evan Burkhart runs through preseason drills for Stockdale football in 2018.

Stockdale's Evan Burkhart pulls down a short pass last year against Ridgeview in 2017.

But following a catastrophic knee injury that wiped out his senior season with the Mustangs, the 5-foot-11, 185-pound wide receiver kicked things into overdrive during the past 12 months — and the results could be scary for opposing defensive backs next season.

“I could easily say I’m a better football player, mentally … physically … than I was a year ago,” said Burkhart, who was invited to play at Arizona State as a preferred walk-on next season. “I’m an inch taller, 8-to-10 pounds heavier and I definitely jump higher. My quickness is just as good, and I’m maybe a step or two faster. Myself now, would destroy (the me) of a year ago.”

That pre-injury version of Burkhart was already pretty good, so good in fact that he caught the eye of several NCAA Division I schools despite playing out of position as Stockdale’s quarterback during his junior season.

But things changed in the blink of an eye when he tore his anterior cruciate ligament and meniscus in his left knee while running a route at the Redlands Spotlight Camp on June 1 last year.

“I was running a route and I planted and it popped, and I kind of felt my knee move, kind of out of place,” said Burkhart, who was initially told by training staff that his knee was fine. “Once I heard the pop, I knew, and it didn’t hurt, I didn’t feel pain. I think I was in shock and my adrenaline was going. But once I got home and it swelled up the next morning, I kind of put my head back and I knew what I did. I was kind of heartbroken.”

He had surgery three weeks later, signaling the start of a grueling eight-month rehabilitation process at Montoya Physical Therapy.

“I just had to have faith in God, stay true to myself and do the right things,” said Burkhart, who believes the staff at Montoya Physical Therapy were instrumental in getting him to the level he’s at now. “They always watched. I never missed a rep. They were always on me all the time and a huge part of my recovery goes to them.”

Overcoming injuries is nothing new to Burkhart, who hurt his left shoulder making a tackle during his freshman season — an injury that also required surgery and eight months of rehab.

The initial injury occurred in the first quarter against Liberty, but Burkhart wasn’t aware of the severity and continued playing until the pain became too much to overcome. He went to the ER where doctors determined he suffered a torn labrum, a broken humerus bone and damaged several tendons in the incident.

After extensive physical therapy, Burkhart was able to return to the football field in time for his sophomore season. The experience is something Burkhart believes prepared him for his most recent setback.

Burkhart also discovered a support group made up of his family and a handful of friends, coaches and trainers.

One trainer in particular, former Bakersfield High and USC wide receiver Larry Parker, who played two seasons for the Kansas City Chiefs, understood what Burkhart was going through.

Parker missed an entire season at USC recovering from reconstructive foot surgery — a surgery he says nobody at the time had recovered from and returned to play.

“I thought my football career was pretty much over,” Parker said. “So I told him, ‘have your surgery and do your rehab, but don’t ever lose that mindset that you’re going to play football at the next level. You can do this.

“In a bad situation, there couldn’t have been a better scenario of me being in Evan’s life to help him through that. I knew exactly how he felt. I thought my football career was over and through the grace of God, it worked out, and in a big way, for both of us.”

Despite not being able to play his senior season, Burkhart was determined to still make an impact on his team, something that didn't go unnoticed by Stockdale coach Brett Shelton.

“It’s just his attitude and his approach toward life,” Shelton said. “He knows there’s going to be adversities, and he climbs those obstacles just as a challenge, and it’s only going to make him better. To have that mature mindset at the age that he’s at … he’s above and beyond his peers.

“To show up at 5 o’clock in the morning (for practice) even though you know you’re not going to play, just to support your guys. On the sidelines he shared what he saw … just his intellect of his game. He’s a thinker, he’s a worker, he’s got all the tools to be successful, especially at the next level.”

Success at the college level is something former Arizona State wide receivers coach Charlie Fisher predicted for Burkhart early on. It was evident the first time he saw him play as a junior, when Fisher went to a Liberty-Stockdale game while recruiting Patriots’ star Ramon Henderson, who committed to play at Notre Dame.

“Ramon did a good job and he’s an outstanding player, obviously, but the kid on the other team kept catching my eye, too, and that was Evan,” said Fisher, who retired after last season following more than 40 years as a football coach. “I wasn’t really tremendously aware of (Evan) when I came in, but I was not long after that game. He really played well. He was playing quarterback, and that wasn’t going to be his position, but you could see the kid had a tremendous competitive edge and was tough and played the game fast. And that’s when I decided I’ve got to track this kid and kind of see how he develops.”

That interest continued even after the injury. Arizona State, Cal Poly and UC Davis stayed in continuous contact with Burkhart, while a host of other schools stopped recruiting him.

The loyalty of the Sun Devils staff was the primary reason he decided to play in Tempe next year even though a scholarship is not guaranteed.

“I have never taken the game for granted, but it made me miss it more so I know when I come back I’m going to be a great player,” Burkhart said. "Having gone through this made me feel closer with my team last year even though I wasn’t even playing. It let me know I have a support system. So it’s just made me more confident and more ready than ever.

“I just think about it like I’m now at the highest level of college football that you can play. It’s been too long since I’ve actually been able to be a part of that team atmosphere as a player. Just thinking about getting back to that, I get antsy. I’m really ready for it.”