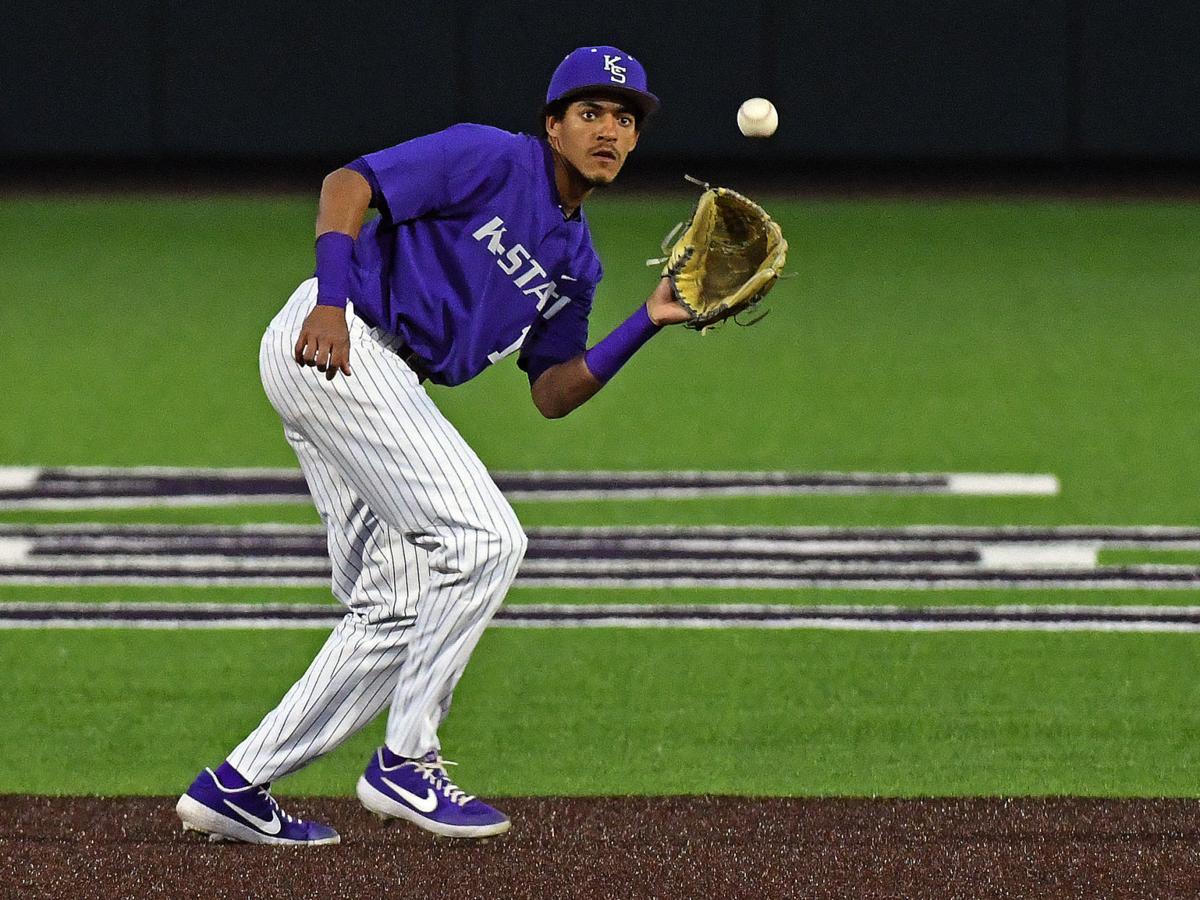 Former Ridgeview and Bakersfield College baseball standout Kamron Willman was off to a hot start in his first season at Kansas State prior to the premature cancelation of the 2020 season.

Former Bakersfield College shortstop Kamron Willman tries to get back to second base to apply a tag on LA Pierce's Nolan Bodeau during a 2019 game. Willman is currently competing for the Amarillo Sod Squad of the Texas Collegiate Summer League.

Former Ridgeview and Bakersfield College baseball standout Kamron Willman was off to a hot start in his first season at Kansas State prior to the premature cancelation of the 2020 season.

Former Bakersfield College shortstop Kamron Willman tries to get back to second base to apply a tag on LA Pierce's Nolan Bodeau during a 2019 game. Willman is currently competing for the Amarillo Sod Squad of the Texas Collegiate Summer League.

Kamron Willman has had enough of seasons ending prematurely.

Willman, a former All-Area infielder at Ridgeview High School, lost a full year of college baseball when a bout of valley fever forced him to miss the entire 2018 season at Bakersfield College.

He quickly put those hardships behind him, finding great success in his return to the field in 2019. That season, he batted .310 with four home runs, 29 RBIs and 26 runs scored, earning all-conference honors and helping the Renegades win a Western State South title.

After hitting just .248 as a freshman at BC, Renegade coach Tim Painton said Willman developed a much more cerebral approach to hitting in his time away, which led to an across-the-board spike in offensive numbers upon his return.

"I think it was a great learning experience for him," Painton said. " I think he had the opportunity to see the game in a different light in a way other than just as (a) participant. He got to see good, bad, mistakes, clutch moments that people delivered in. He came back with a whole different approach to the game.

Those improvements carried over to the Division I level, as Willman was immediately impactful in his first season at Kansas State in 2020.

He started the first 17 games of the season at shortstop for the Wildcats, hitting .274 with 11 RBIs. He had multiple hits in five games and drove in multiple runs four times.

Unfortunately, his progress was halted in mid-March thanks to COVID-19, which forced K-State to cancel its season just a week before Big 12 play was to begin.

Seeing a season end abruptly for the second time in three years, Willman says he's grown to appreciate any opportunity to take the field in a team setting, and was elated when such an opportunity came about last week.

After more than three months off, Willman made his long-awaited return to action with the Amarillo Sod Squad of the Texas Collegiate League, who kicked off their season on June 30.

Though his early offensive stats (1-for-7) aren't electric, Willman found ways to contribute, drawing three walks and scoring two runs in two games. His lone hit thus far proved critical too, as he singled and scored in the first inning of a 1-0 win over San Antonio on July 1.

Days removed making his return to action, Willman says the thrill of being back on the diamond hadn't yet worn off.

"It was awesome," he said. "It'd been awhile since I'd played baseball competitively and just being out there, getting those little butterflies, I was excited to have that back."

Circumstances aren't exactly what Willman is used to, as the league is taking major precautions to prevent the spread of the coronavirus.

Willman says players are required to have daily temperature checks and must to wear masks while in the clubhouse. He can also have little interaction with fans and he and his out-of-town teammates have to spend virtually all their free time isolated in a team hotel.

But even with such precautions in place, Willman, who played in California's Palm Spring Collegiate League in 2019, says the environment isn't much different than what he's experienced in previous summers.

“The way summer ball is set up, you’re with your teammates 20 hours a day," he said. "You’re going to bed then you’re waking up and you’re seeing your guys all the time. COVID really hasn’t changed that aspect of summer ball. You’re still having fun with guys who love this game as much as you do.”

Fellow K-State players Terrence Spurlin and Mason Crews are also playing with Willman in Amarillo this summer, and being around them has proven valuable in recent weeks.

Kansas State recently drew national attention when a student tweeted an insult directed at George Floyd, a black man whose death in police custody has sparked nationwide protests throughout the summer. After the news broke, K-State football players threatened to boycott team activities before ending the threat last week.

In light of what’s going on in the world right now, if you can’t take a step back and try to understand the issues our communities go through on a daily basis then may God help you.

Willman initially expressed outrage on Twitter, writing "if you can’t take a step back and try to understand the issues our communities go through on a daily basis then may God help you."

Despite wanting to keep his focus on a return to the field, Willman felt it was important to take part in the ongoing dialogue about race relations in American.

“I understand this is bigger than baseball," he said. "At the end of the day, K-State, we’re a family, we’re tight-knit. And we want those same values to represent who we are at the school.

"The athletes coming together and realizing this is not the way it’s supposed to go, and coming together to change that was really inspiring. I (had to) be part of something like that.”

When he returns to Manhattan, Willman plans to add significant muscle to his frame. Currently listed at 175 pounds, he wants to bulk up to 190 by next spring.

From there, he hopes to help Kansas State, which was 10-7 when the season was canceled, reach new heights as a program. The Wildcats haven't made the NCAA Tournament since 2013 and have never qualified for the College World Series in Omaha, Neb.

But with the entire team set to return, Willman says only the highest of expectations will be accepted.

"Our goal is to win the national championship," he said. "If we’re not preaching that every day and we’re not working for that end goal every day, we’re wasting time. Everything we do out here is for a purpose and that purpose is to get to Omaha and win it.”