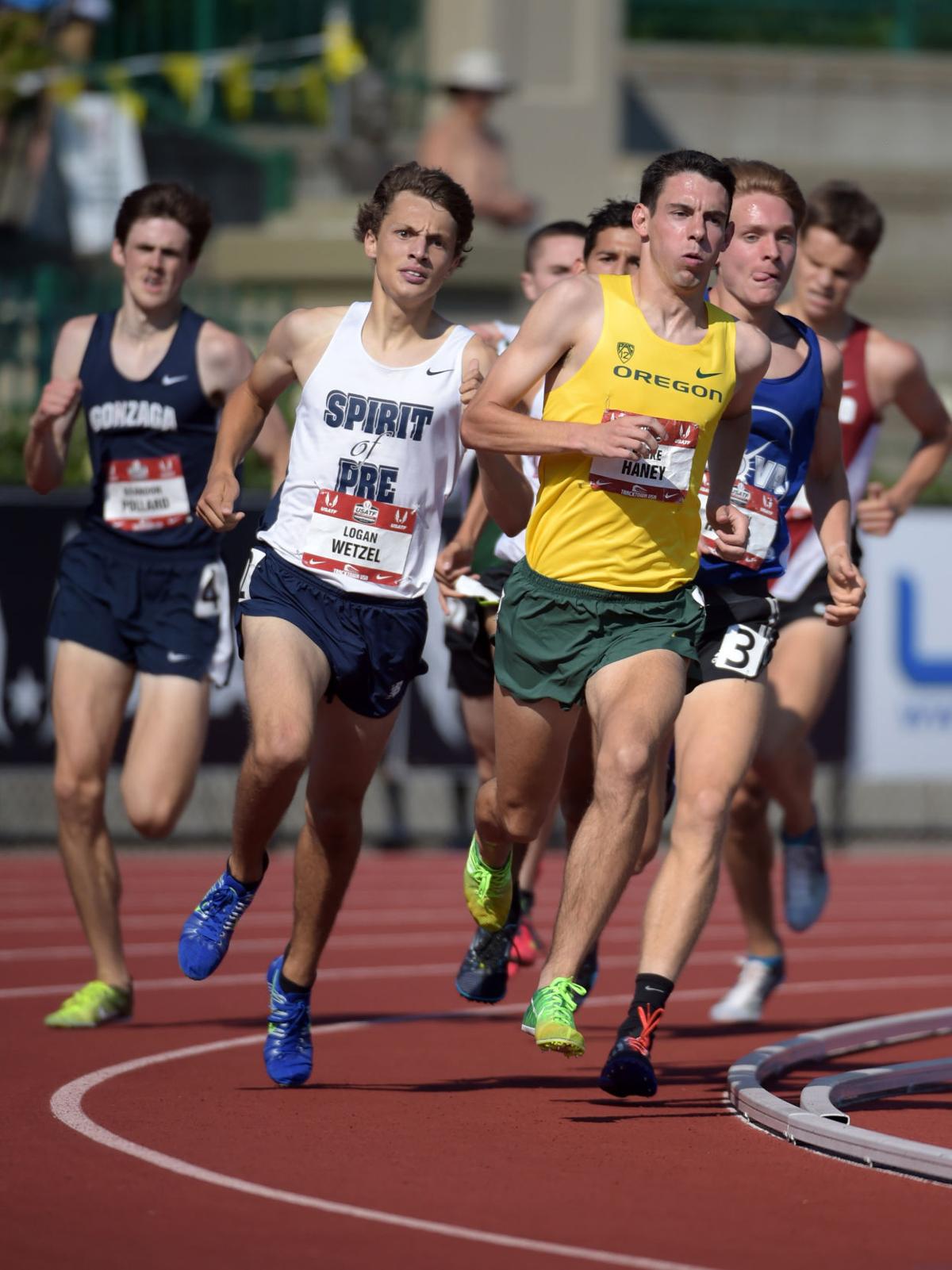 Stockdale alum Blake Haney, of Oregon, wins the junior 1,500 meter run in 3:58.16 in the 2015 USA Championships at Hayward Field. Haney, a dual citizen of America and Canada, hopes to find similar success as he is currently training to earn a spot on the Canadian Olympic Team in 2021. 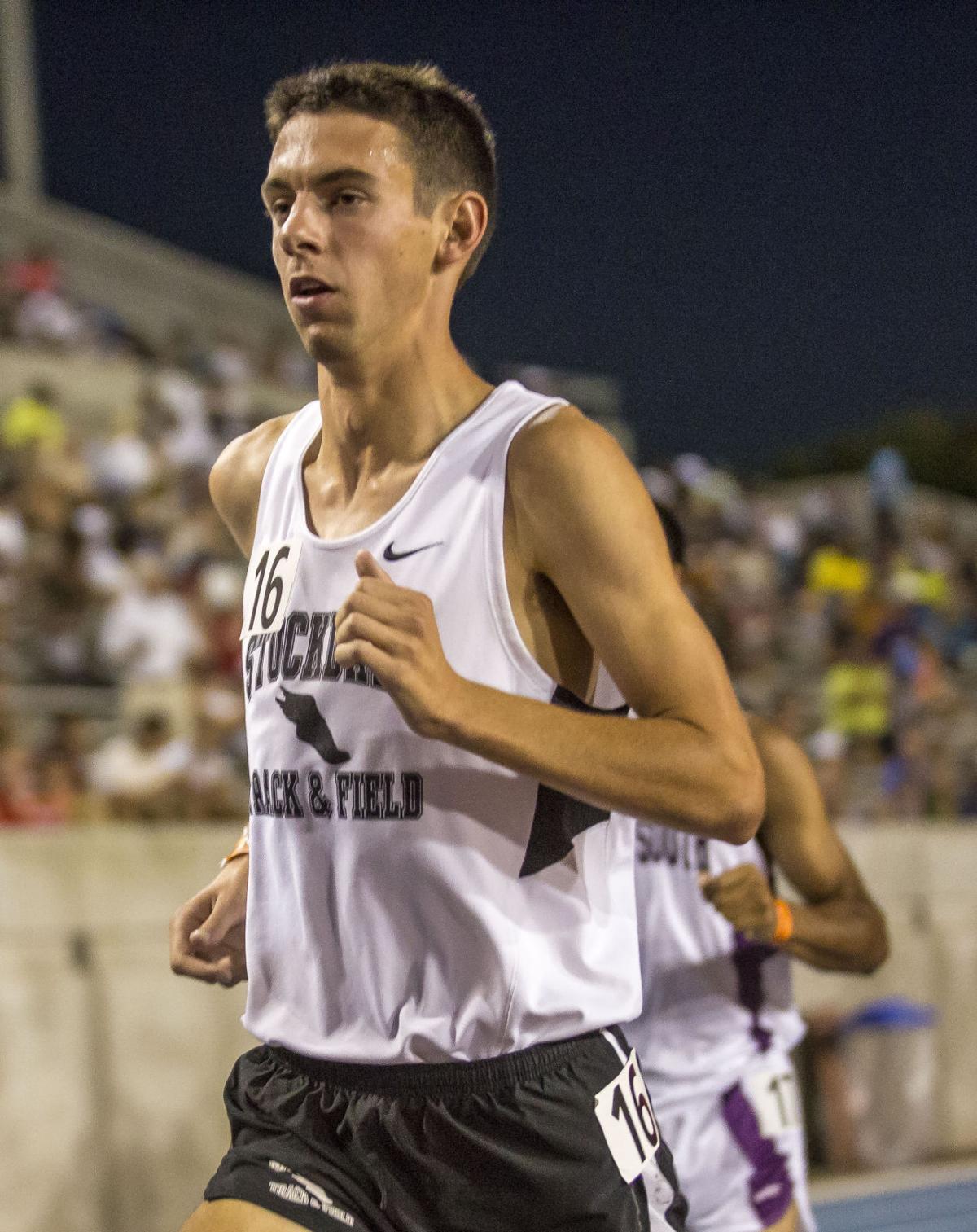 Stockdale's Blake Haney at the 2014 CIF state track and field championship in Clovis.

Stockdale alum Blake Haney, of Oregon, wins the junior 1,500 meter run in 3:58.16 in the 2015 USA Championships at Hayward Field. Haney, a dual citizen of America and Canada, hopes to find similar success as he is currently training to earn a spot on the Canadian Olympic Team in 2021.

Stockdale's Blake Haney at the 2014 CIF state track and field championship in Clovis.

An accomplished distance runner himself, Ken Haney has taken great pride seeing his son, Blake, find similar success represent the country where he grew up.

Not only has Blake -- a three-time track and field state champion at Stockdale High School and seven-time All-American at the University of Oregon -- thrived at the prep and college level, he's also proven to be a force on the national and international stage.

As exciting as it was to witness his numerous successes representing the U.S., Ken had another vision in his head he hoped to see Blake fulfill.

Years before Blake began rising through the ranks of the American distance scene, the Haney family had already made their mark up north.

Growing up in Surrey, British Columbia, Ken had a decorated career in Canada, even qualifying for the finals of the 800-meter run at Pan American Junior Games in 1980. Ken's sister, Cindy, also competed as a marathon runner at the Canadian World Championships 1983.

Ken eventually made his way to America after securing a track and field scholarship at Cal State Bakersfield, but maintained his Canadian citizenship. As Blake, a dual citizen, progressed in his career, Ken admits he held out hope that his son one day sport the same colors he had worn in his racing days.

“That was kind of my dream that he would kind of follow in my footsteps," Ken said. "I think he represented the U.S. extremely well a couple times. And I thought ‘You know what? I’m going to lobby a little bit, so maybe he can represent Canada also.’ ”

As he prepares for the toughest competition he's faced, Blake has granted his father's wish.

After pouring over the decision for months, Blake officially made the jump to the Canadian side following his final collegiate season. Currently, he is training with hopes of running with the country's Olympic team during the 2021 Tokyo Games.

"It's a unique opportunity," said Blake, who hopes to run the 1,500 at the Olympic Trials in Montreal next June. "It's something I knew would make (my dad) happy. It's a pretty cool thing for my family to see."

By the time he gets to Montreal, Blake is hoping to be fully healthy, something he hasn't been for the better part of a year and a half.

Issues began in his final season at Oregon in 2019, when bouts of achilles bursitis and peroneal tendonitis in his foot sidelined him for a good portion of the outdoor track season. Though he did work his way back in time to compete at the 2019 Canadian Championships, the injuries limited his effectiveness and he failed to reach the finals.

Ailments persisted in 2020, as Blake was sidelined again this spring with a stress fracture in his sacrum, a triangular-shaped bone connected to the pelvis.

And while this most recent injury would have limited his chances of reaching the Olympics had they gone as scheduled in 2020, Haney actually caught a competitive break when the COVID-19 outbreak caused the games to be be pushed back a year.

"I wouldn't have been at my best, there's no doubt about that," he said. "I definitely think that was a benefit to not having anything on my calendar. I got to take my time, I came back and I'm in a good spot now."

Feeling the healthiest he's been in some time, Haney has been able to ramp up his training in a setting quite comfortable to him.

Recently, Haney was one of 10 athletes selected to run with the Under Armour Dark Sky Distance team out of Flagstaff, Ariz. Haney says competing with high-caliber runners with similar ambitions is proving valuable as he prepares for next summer's trials.

“It’s similar to having a high school team or a college team," he said. "Just having people to train with you can use to get better. I’ve always done better with a group of people that want to do better and help each other.”

Though COVID-19 has left their schedule up in the air, Haney and his Dark Sky teammates are hoping to find international events where they can compete in the coming months. One race Haney has his eye on is the 2021 World Indoor Championships, which are set to take place in Nanjing, China in March.

After losing so much time with his various injuries, Haney says he feels as good as he has in years. Believing the time away has done wonders for his body and his mind, he is eager to prove he belongs among the world's best distance runners.

“It kind of puts me in a good frame of mind," he said. "You kind of take it for granted when you run it for a couple years uninterrupted. Once you come back from an injury, you’re kind of just happy to be back running. It kind of reinforces what I want to be doing right now.”