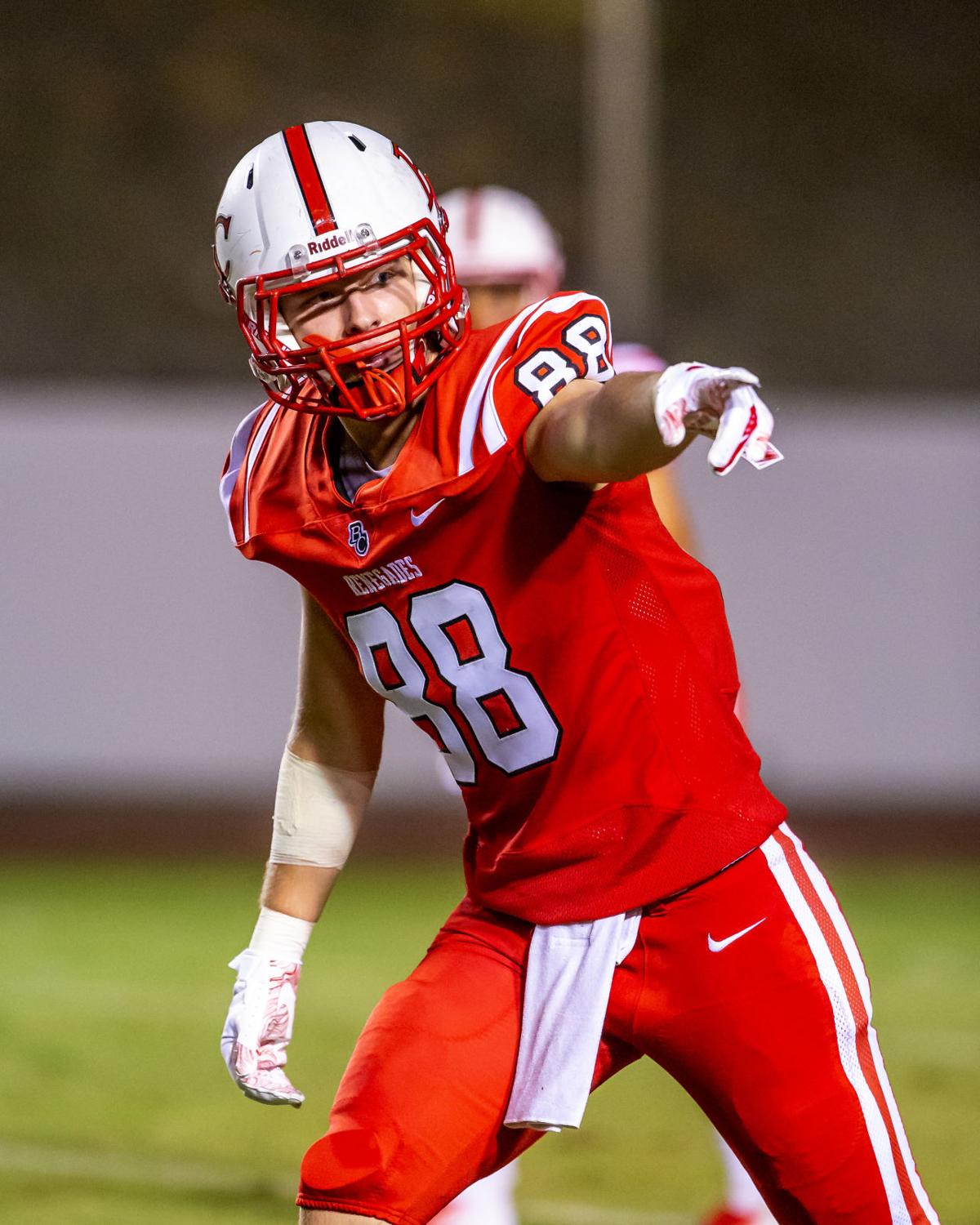 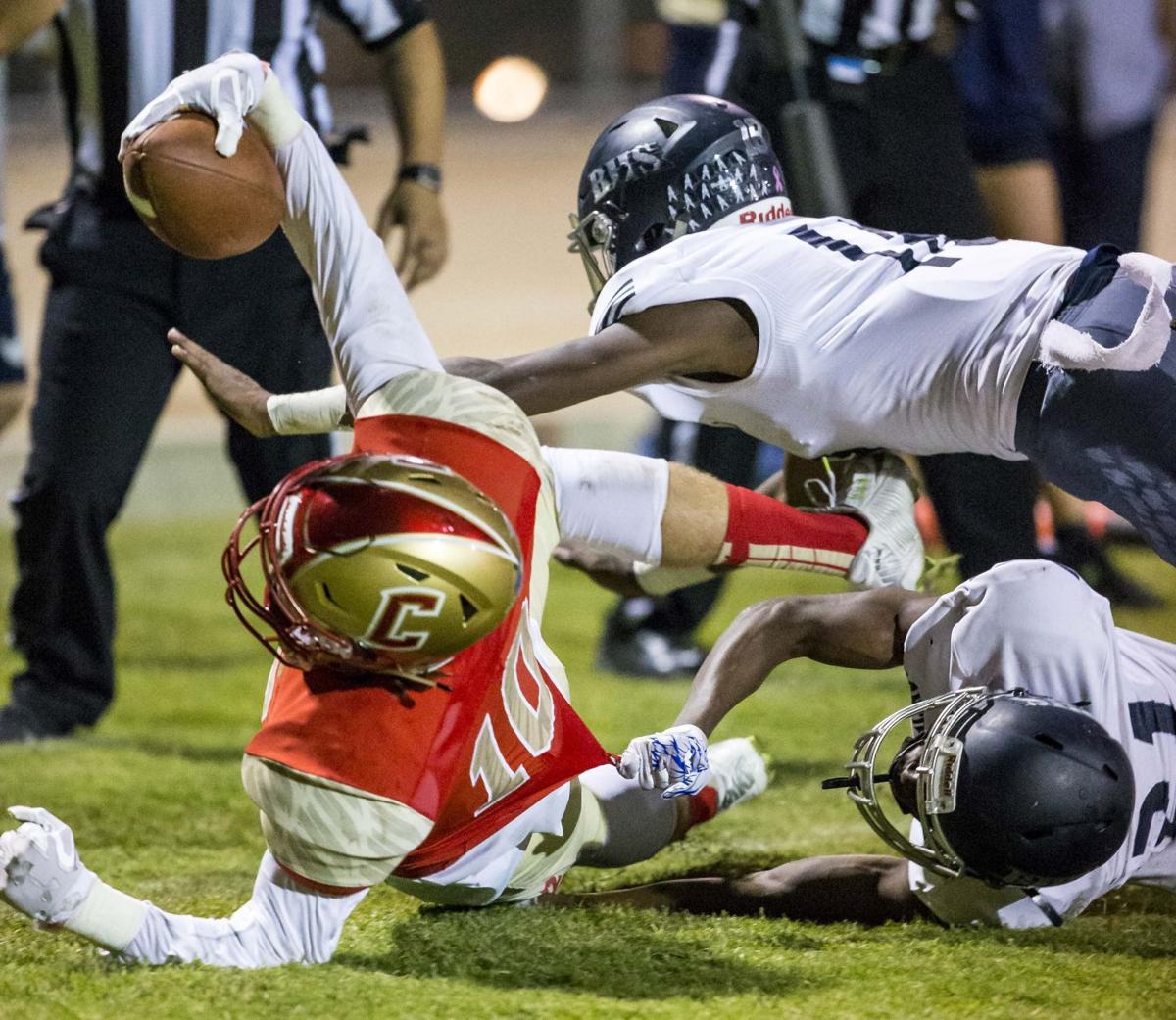 Zach Hartsfield, left, dives for the goal line in a 2016 game against Bakersfield. After playing receiver at Centennial, Hartsfield made the switch to tight end at the collegiate level.

Zach Hartsfield, left, dives for the goal line in a 2016 game against Bakersfield. After playing receiver at Centennial, Hartsfield made the switch to tight end at the collegiate level.

When he grew up dreaming of playing Division-I football, it's safe to assume the fantasy that played out in Zach Hartsfield's head didn't match the realities of 2020.

On Wednesday, Hartsfield — a Centennial High School and Bakersfield College graduate — is set to begin voluntary offseason workouts at FBS Eastern Michigan, where he signed as a junior college transfer last December.

And though he is on the cusp of fulfilling a lifelong ambition, Hartsfield, who hopes to see the field as a tight end for the Eagles this fall, admits he has a long string of adjustments in front of him, and not simply because of the higher level of competition.

After enrolling in January to take part in team workouts, Hartsfield and his Eagle teammates were sent home in March as the spread of the Coronavirus forced all spring activities to be canceled.

And while many players are starting to make their return to campus, the setting is a different one than they're used to. Currently, all weight equipment has been moved outside as on- and off-field drills are all being conducted in the intense summer humidity.

“They have it set up to where nobody can go inside the locker room," Hartsfield said. "If you need something, you have to talk to an equipment guy. Basically, you’re not getting in contact with anybody the entire time you’re working out.”

Though antsy to showcase his playmaking ability at the D-I level, Hartsfield is no stranger to taking the patient approach.

Despite an explosive senior year as a wide receiver at Centennial, where he averaged 16.2 yards per catch during an All-SWYL season in 2017, Hartsfield didn't get the offers he was looking for and chose to boost his profile at Bakersfield College.

And while he was able to display some of his big-play ability, averaging 19.3 yards per catch as a converted tight end, the Renegade's ultra-conservative, run-heavy offense didn't provide many opportunities, and Hartsfield caught just 10 passes in two seasons at BC.

But even without a glut of splash plays, Hartsfield still made his presence felt as an in-line blocker, something he was rarely asked to do before coming to BC.

Adding nearly 20 pounds of muscle since high school, his blocking abilities helped earn him First Team All-SCFA honors in 2019. More importantly, they developed him into a more well-rounded player and allowed him to catch the eye of scouts who may not have noticed him years earlier.

"I honestly felt that he was overlooked when he was coming out and we weren’t really sure why," said Chad Brown, who coached Hartsfield at Centennial. "He had a ton of great film and he had a fantastic GPA. He was tall, (had a) big frame, never missed a practice. But I think he made the right decision in waiting, going to BC for a couple years to hone in on some things. It’s a big deal to play at (the Division-I) level, for sure.”

Hartsfield also believes adding significant muscle to his frame helped prepare him for the brutality of his first D-I practices in January.

"The first probably two or three weeks were definitely the hardest weeks of football that I’ve ever had," he said. "But it was definitely a new experience and I loved it. I was so excited to come back whenever they said we could come back. It’s a different feeling playing football at the Division-I level and it’s one I’ve wanted to have since I started playing.”

When he returns to the field, Hartsfield will be in a good position to his his big-play output expand. Currently, he's slated to take snaps from the H position, where he'll primarily be used in a pass-catching role.

But as teams throughout the country have returned to their facilities, COVID-19 outbreak spikes have come with them, and serious doubts that the season could start on time, or at all, have reemerged.

Hartsfield admits he has concerns that the season could be impacted, but is trying to keep a positive outlook.

And with two SEC matchups — including a season-opening, Sept. 3 game at Kentucky — on EMU's schedule, he's hopeful his long-sought after dreams of playing against some of the country's best competition will be fulfilled in a timely manner.

“It’s really just like a dream come true," he said. "It’s really exciting seeing the teams I kind of grew up watching on TV and now I’m going to be on TV.”