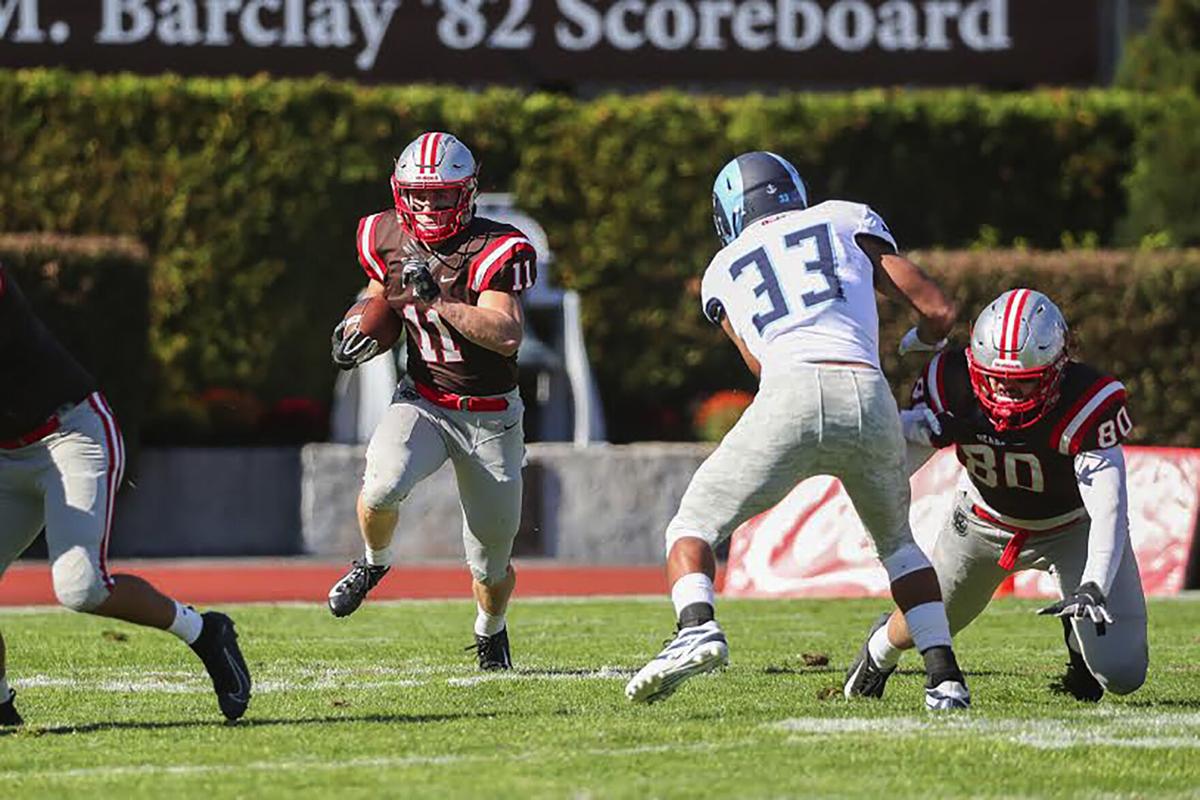 Former Garces receiver Scott Boylan, who played his first three collegiate seasons at Brown, will take a stab at power-five football after committing to play at Duke as a graduate transfer. 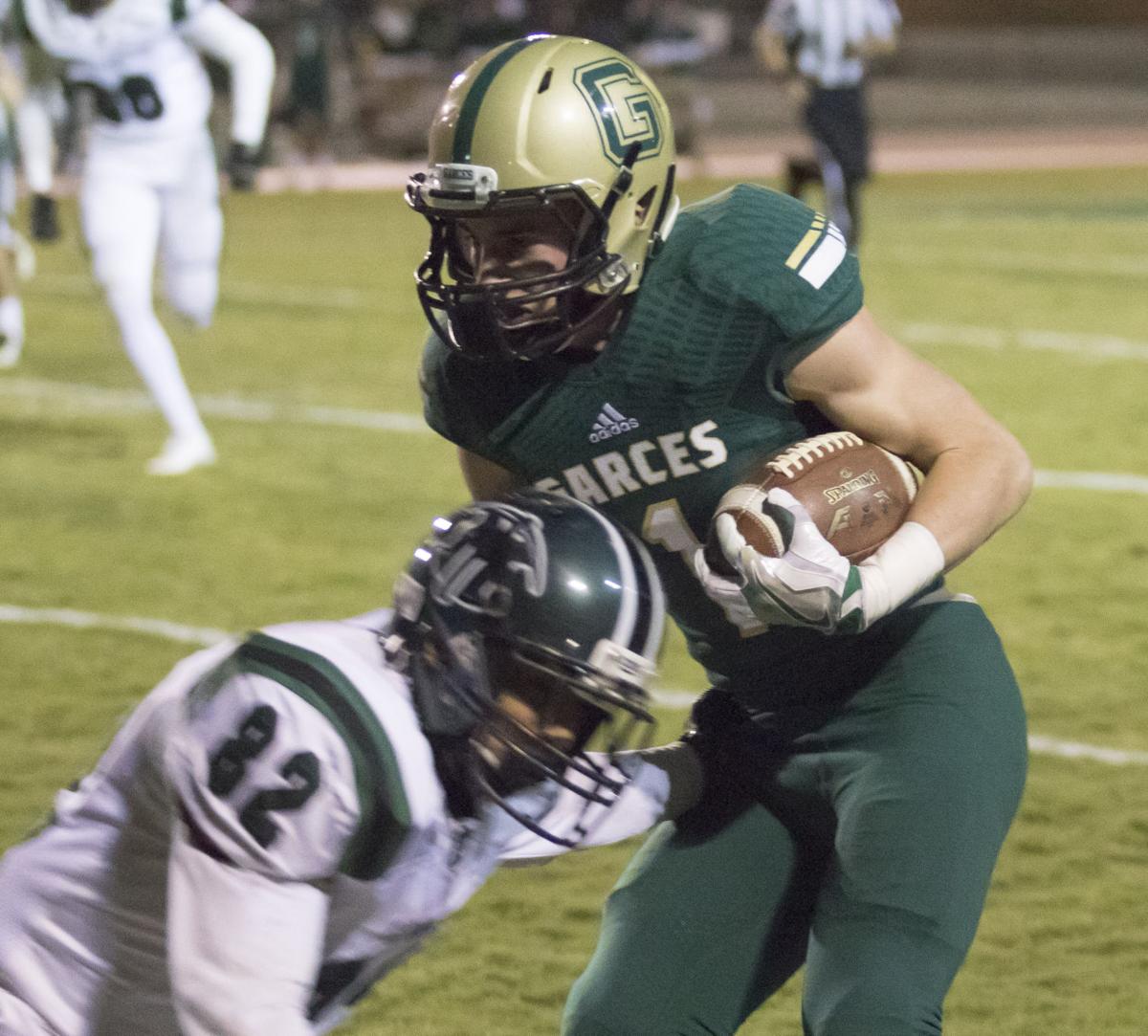 Scott Boylan tries to shed a defender in a 2016 game with Garces. Entering high school a skinny 130 pounds, Boylan has bulked up more than 50 pounds and will now take his talents to Duke.

Former Garces receiver Scott Boylan, who played his first three collegiate seasons at Brown, will take a stab at power-five football after committing to play at Duke as a graduate transfer.

Scott Boylan tries to shed a defender in a 2016 game with Garces. Entering high school a skinny 130 pounds, Boylan has bulked up more than 50 pounds and will now take his talents to Duke.

Hours into his 22nd birthday, Scott Boylan felt like holding a different kind of celebration.

Like many of his peers, Boylan, a former receiver and running back at Garces Memorial High School, has seen his football career upended by COVID-19. Coming off a strong junior year at Brown, where he had career highs in receptions (34), yards (455) and touchdown catches (five), he had high hopes for his senior year, feeling the Bear offense had begun to hit its stride at the end of 2019.

But his time at Brown would come to a premature end. Not only did the Bears not play this fall, they won't have an opportunity to compete in the spring either, as the Ivy League opted out of a planned FCS season.

But it was a call on his birthday that brought his future into clear focus.

After speaking with coaches at Duke for over a month, Boylan was contacted by Blue Devil head coach David Cutcliffe on Monday. By the time he hung up, he had an offer from a power-five school.

Initially planning a quiet birthday with his parents and fiance, the celebration quickly changed course for Boylan, who committed to Duke that evening.

"I forgot it was my birthday halfway through the day," he said. "It was definitely the best present I could have gotten."

Having spent his first three collegiate seasons in the Ivy League, Boylan will face much stiffer competition with the Blue Devils, whose conference, the ACC, accounted for half the teams that qualified for this season's College Football Playoff.

If someone were to express surprise in Boylan's significant jump, he insists he won't be offended. In fact, there was a time even he admits the idea of playing in one of the toughest conferences in college football seemed highly far-fetched.

"If you had come to me my sophomore year of high school — I was a scrawny, 130-pound little kid — and told me that I'd be playing ACC football, I would have laughed in your face," he said. "It's crazy to think about. I can't even put it into words."

Though saying Boylan's assessment of his early high school physique is "100 percent correct," former Garces coach A.J. Gass isn't at all surprised to see him land a spot in one of the country's top conferences.

Gass, a former all-conference linebacker at Fresno State who went onto play in the CFL, knows what FBS talent looks like, and by the time his senior year rolled around, he saw the needed traits in Boylan, who'd added considerable muscle to go along with already established speed.

“We instituted a pretty rigid, rigorous weight lifting program and Scotty never missed a day," Gass said of Boylan, who is currently listed at 5-foot-10, 185 pounds. "He just became a training fanatic. By his senior year, with his speed and his elusiveness, I absolutely knew he could play big-time football."

Boylan's versatility is also likely to help with his transition in Durham.

Things weren't always ideal at Brown, where the Bears changed offensive schemes in all three of Boylan's seasons, compiling a record of just 5-25 in the process.

But there were positives too, as Boylan, who scored 11 total touchdowns as a receiver, running back and kick returner, says Blue Devil coaches told him his smarts and versatility were a big reason they made him an offer.

"It kind of forced me to grow my football IQ," he said. "It's been a struggle not winning games, nobody enjoys that. But I've learned a lot of football because of (my time at Brown)."

Set to graduate with undergrad degrees in business and philosophy this spring, Boylan, who is still unsure what career path to take post-football, hopes to improve his prospects by earning a master's from another prestigious university.

While he's doing that, he's excited to make the most of a chance to play football at a level he previously believed to be beyond his reach.

"I'm still kind of shocked that I've been given this opportunity," he said. "I’m just excited to play. I’m not really nervous, or anything. I know it’s going to be much more competitive and the players are going to be at a much higher level, but that doesn’t change the way I’m going to play my game. I’m just going to soak up everything about it.”