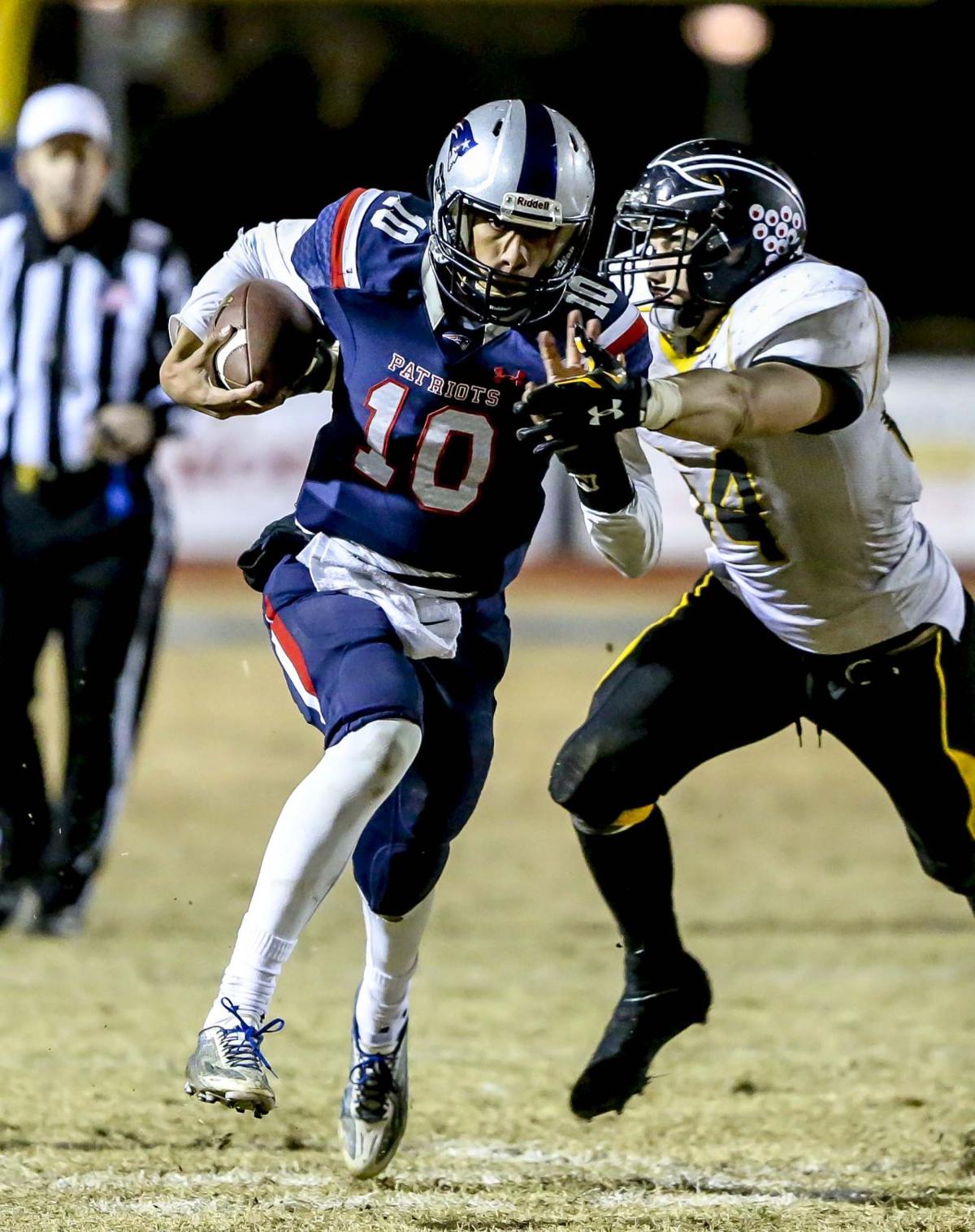 Jordan Love breaks past a Del Oro defender in a 2015 game. 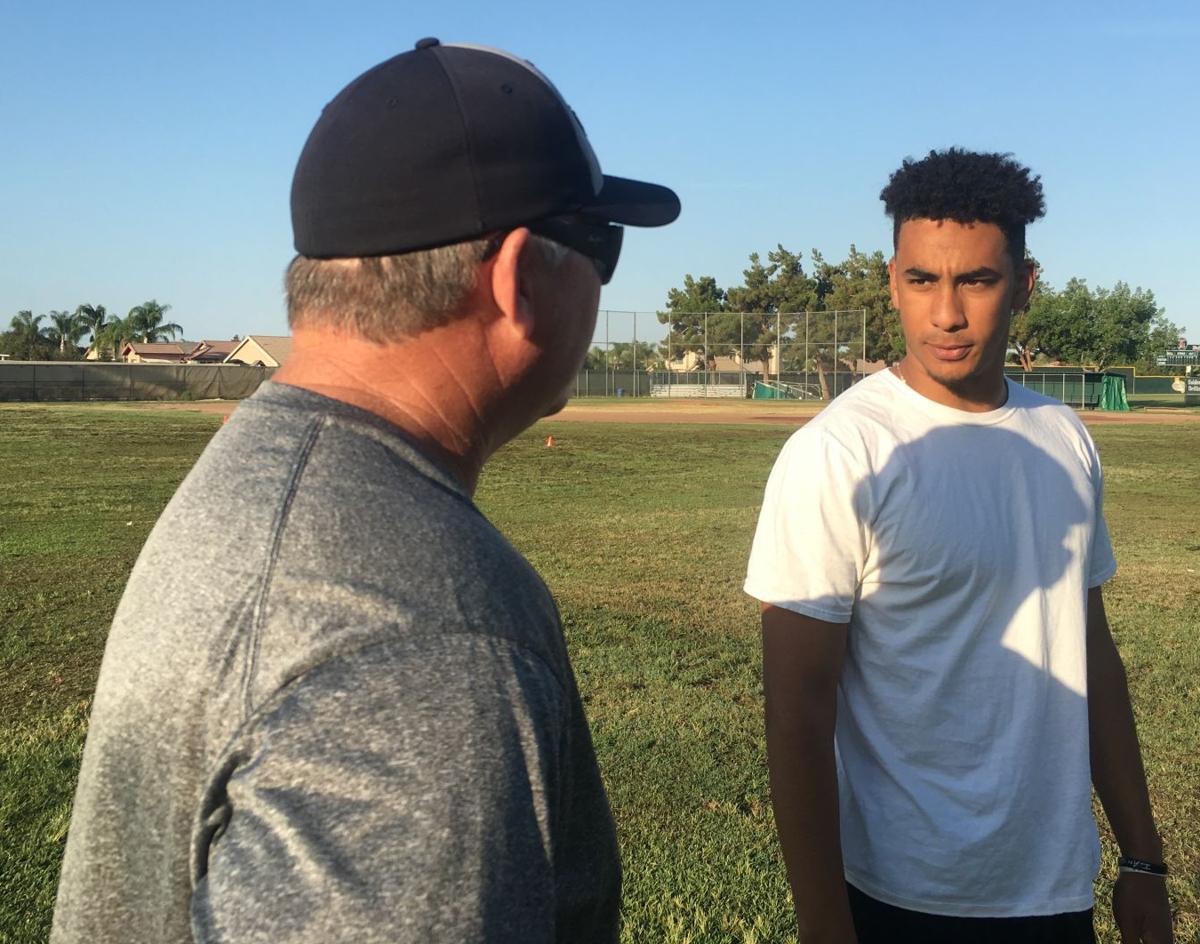 Former Liberty quarterback Jordan Love (right) speaks with his former high school coach Bryan Nixon at Liberty practice in 2018. The pair has remained close in recent years, and has been in regular contact as Love prepares to be selected in the upcoming NFL Draft.

Jordan Love breaks past a Del Oro defender in a 2015 game.

Former Liberty quarterback Jordan Love (right) speaks with his former high school coach Bryan Nixon at Liberty practice in 2018. The pair has remained close in recent years, and has been in regular contact as Love prepares to be selected in the upcoming NFL Draft.

After a dazzling performance at February's Scouting Combine, Love, a former Liberty quarterback and projected 2020 first-round pick, expected the ensuing weeks would be a whirlwind of coast-to-coast travel. A March 25 Pro Day at Utah State was to give way to dozens of meetings and workouts for NFL teams deciding if they wanted to use a high pick on Love.

Ideally, this would have led to a coveted green room invitation to the opening day of the draft in Las Vegas on April 23, where Love hoped to shake hands and pose for photos with Roger Goodell moments after the NFL Commissioner announced where he would begin his professional career.

And though the goal of being a high draft pick is still very much obtainable, the process has been anything but ordinary.

After forcing Love's Pro Day to be canceled, the COVID-19 outbreak prohibited NFL teams from holding face-to-face meetings with prospects. The league then took the drastic step of altering the draft itself, canceling the scheduled event in Las Vegas for an experimental virtual draft.

And while Love admits "it would have been cool" to have the typical experiences for a player of his stature, he's found an alternate path that suits him well.

For the past three weeks, he's been back in Bakersfield, his days spent mostly indoors, packed with workouts and virtual conferences with quarterback-needy teams. But being home has also presented a needed opportunity to catch up with friends and family members he wasn't expecting to see during this process.

Staying with his mother Anna, Love has spent extended time with sisters Kami, Emily and Alexis, who are all expected to watch the draft with him Thursday. He's also been working out with friend and high school teammate Krys Barnes and has regular phone calls with Bryan Nixon, his head coach at Liberty.

Surrounded by people who helped put him on his current path, Love is finding great comfort in his unorthodox situation.

"My mom, my sisters, a lot of people in my family, the friends I have, that's what's most important," he said. "And football."

All those elements came together at a critical time for Love, whose life took a drastic turn at age 14.

As he was set to begin his sophomore year of high school, tragedy struck when Jordan's father Orbin, who he called "my biggest supporter for sports," took his own life in July of 2013.

Losing his father during his formative years left an indelible mark on Love, who still has a hard time discussing the matter nearly seven years later. But while some may have been broken by such tragedy, Nixon says Love's resolve shined through.

"I think that’s where we learned about his perseverance, about his ability to overcome adversity and be successful," Nixon said. "Nothing he’s going to be presented with is going to be too big for him.”

Aided by a much-needed growth spurt (Love entered high school at 5-foot-6 but was 6-3 by graduation), he set off on a record-setting career at both the high school and college level.

As a senior at Liberty, Love accounted for 2,954 yards of offense and 32 touchdowns as the Patriots won their first Division-I Central Section championship. Love had arguably the best performance of his high school career in the section title game, throwing for 296 yards and three touchdowns in a 56-21 rout of Clovis.

Despite getting just one FCS-I offer, Love made the most of his opportunities at Utah State, where in two-plus years as a starter, he recorded a school-record 9,003 yards of offense.

Love's rise from undersized high school project to potential franchise savior has felt both thrilling and incomplete. And even with a big family gathering planned Thursday, he says it will sting knowing that Orbin won't be next to him when he hears his name called.

But despite in his absence, Jordan takes pleasure in knowing his dad would be swelling with pride at his success.

"My dad was huge for me and he'd be super happy to see where I'm going," he said.

Where Love winds up going is still a mystery, though several outlets project he'll be in position to replace a future Hall of Famer.

A projection with a great deal of local intrigue was floated by ESPN's Mel Kiper last week, when he wrote that Love would be taken 19th overall by the Las Vegas Raiders, where he'd be teamed with fellow Bakersfield native Derek Carr, the Raiders' starting quarterback the past six seasons.

Love, who says he hasn't met Carr, is intrigued by the possibility of competing for a job with a player from his hometown, but says civic pride won't distract him from the task at hand.

"That would be really cool with two Bakersfield guys (on the same team)," Love said. "That would be crazy. But at the end of the day, I'm a competitor and I'm always going to try and (get the job) myself."

Ready to join a long line of local players to reach the NFL, Love's success is a cause for celebration by those who came up with him.

“He’s got so much success coming his way," said Barnes, himself a 2020 draft prospect. "With everything he’s been through in his life, he deserves everything. I couldn’t be prouder of everything he’s worked for."

Even if it won't involve a photo op with the league commissioner, Love says there's no better place to begin the next chapter of his football life than in Bakersfield.

Though his rise to the starting ranks may take a few years, Jordan Love's path to the NFL put him in line to replace a legend in Green Bay.