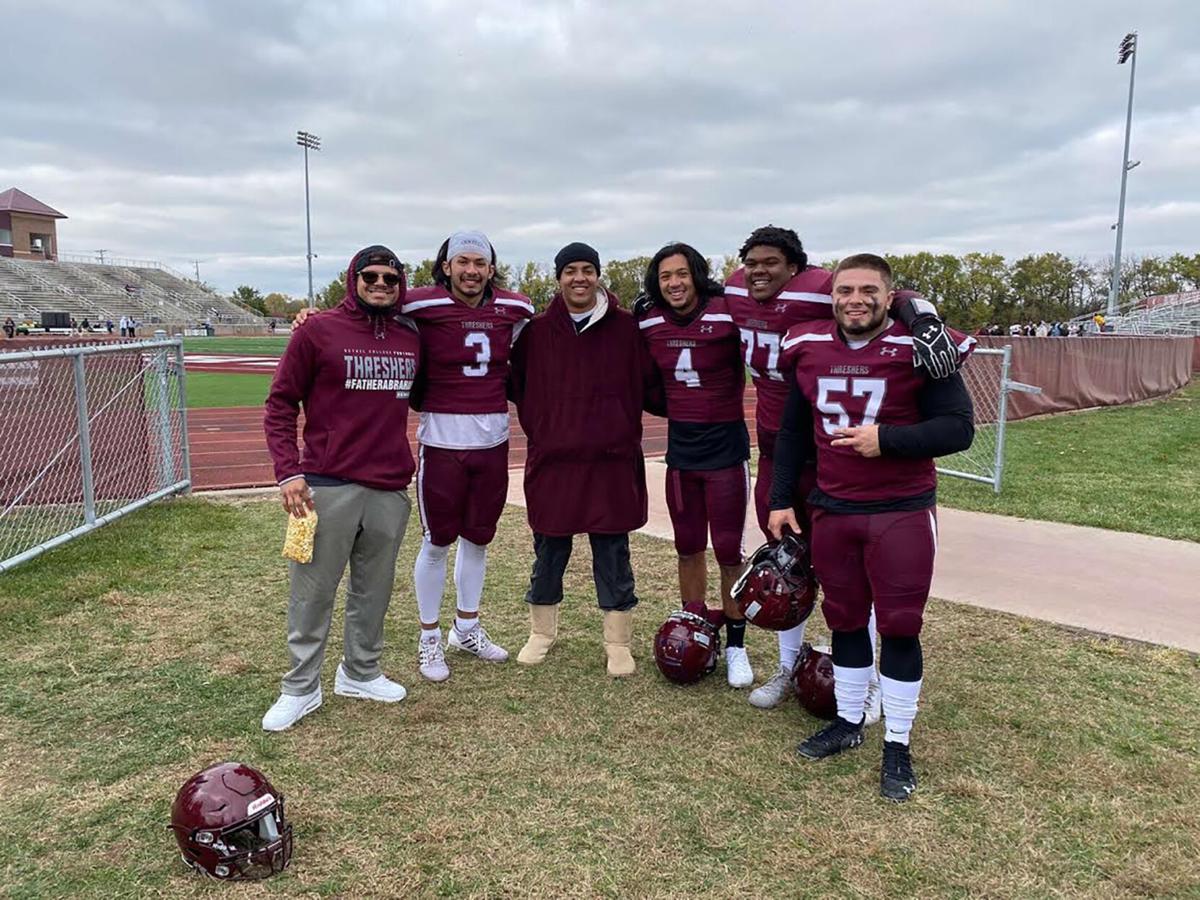 From left to right, Bakersfield natives Steven Marks, Josh Maran, Bishop Maxwell, Jacob Maran, Antwan Thompson and Bryce Underwood pose for a picture during the 2020 football season at Bethel College. Bethel, an NAIA program out of Kansas with a perfect 7-0 record this fall, has seven Kern County players on its roster. 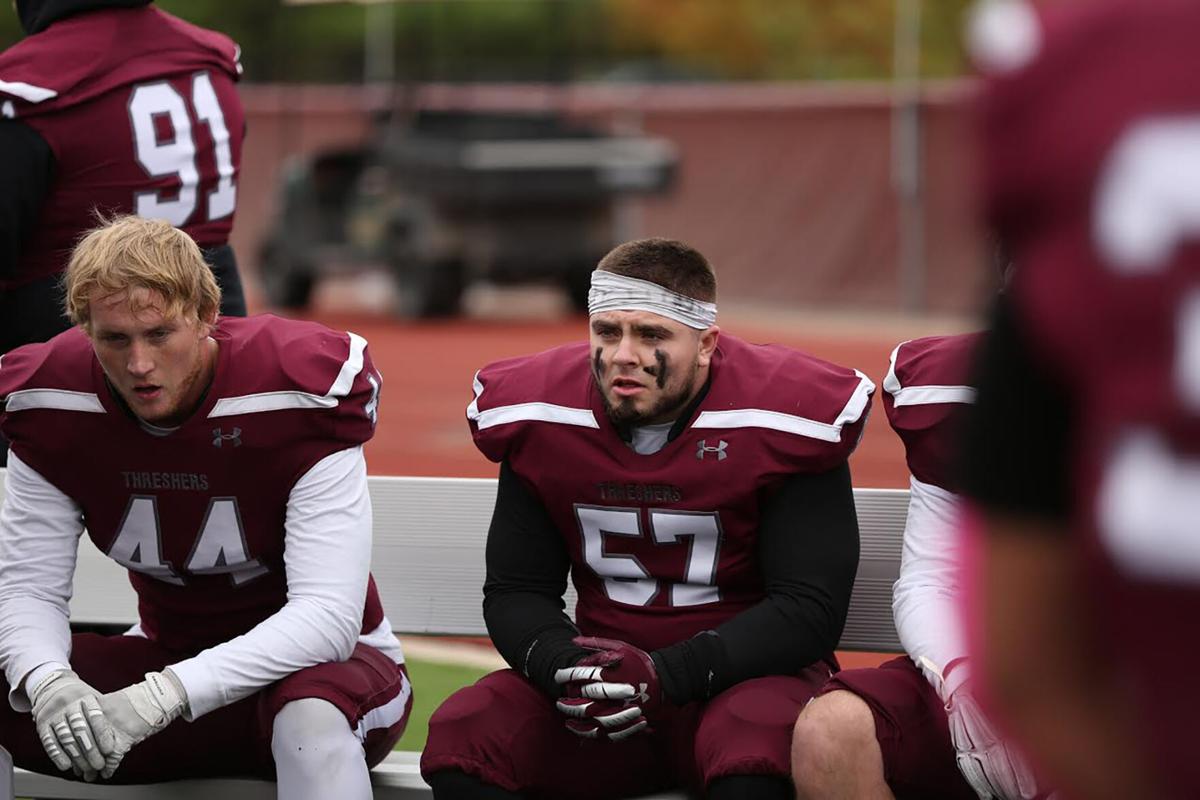 Former Bakersfield High and Bakersfield College defensive lineman Bryce Underwood (No. 57), takes a breather during a 2020 game at Bethel College. Underwood has four tackles for a loss on an undefeated Thresher team.

From left to right, Bakersfield natives Steven Marks, Josh Maran, Bishop Maxwell, Jacob Maran, Antwan Thompson and Bryce Underwood pose for a picture during the 2020 football season at Bethel College. Bethel, an NAIA program out of Kansas with a perfect 7-0 record this fall, has seven Kern County players on its roster.

Former Bakersfield High and Bakersfield College defensive lineman Bryce Underwood (No. 57), takes a breather during a 2020 game at Bethel College. Underwood has four tackles for a loss on an undefeated Thresher team.

When he scheduled a 2019 trip to North Newton, Kan., Antwon Thompson didn't realize he was about to become a trendsetter.

Thompson, a 2019 graduate of Bakersfield High School and a former offensive lineman for the Drillers, was looking for any opportunity to extend his playing career after being unable to land any Division I or II offers. This quest took him to Bethel College, a small NAIA school that expressed interest after receiving his game film from BHS.

Having grown up in heavily populated California, the trip to a flat midwestern town with a population of under 2,000 was a culture shock for Thompson. But the small-town setting and direct, personal attention he received from coaches ended up holding great appeal, and he quickly signed on for the drastic change of scenery.

"It's a great place to be," said Thompson, a sophomore reserve offensive lineman for the Threshers. "You can really just focus on school and your head's not in too many spots. The coaches talk to guys like they weren't just their players. They actually cared for them."

Thompson says the team vibe at Bethel is very similar to the one he came up in at BHS. So when several of his former high school teammates were also looking for a place to extend their careers, he made a compelling pitch.

They've since been joined by Maran's brother Jake, a Bakersfield Christian grad and sophomore defensive back who transferred from Cal Lutheran, and Isaac Enriquez, a freshman wide receiver from Shafter.

"It's a cool experience, all of us being together," Thompson said. "We're all 23 hours away from home, so it's nice having people (from back home) to talk to."

Thompson's high school teammates agree that the program run by Thresher coach Terry Harrison and his staff is very similar to what they played in at BHS, which made their transition an easy one.

"It's more of a brotherhood," said Underwood, a junior defensive tackle with four tackles for loss and a sack this season. "That is what coaches preached about at Bakersfield High School and that's what I think is really mirrored here."

For college football players with D-I aspirations, going the NAIA route can sometimes feel like an unsatisfying outcome. But if there was ever any disappointment with the players interviewed, they say it dissipated quickly, believing the stigma some have put on playing at lower levels is an unfair one.

'Sometimes ... you just not cut out for a D-I body," says Marks, a junior defensive back with 22 tackles and an interception this season. "If you're a real ball player, you want to get the opportunity to play ball and sometimes you're not going to have that opportunity at the D-I, D-II level.

"For anybody that's wary of going the NAIA route, I think they just need to grow up a little bit and see the bigger picture. We play great competition here and we have a great culture."

There was a time when the culture at Bethel wasn't a selling point. When Harrison arrived in 2018, he inherited a program that had won three or fewer games in nine consecutive seasons, a streak that extended to 10 after a 3-7 finish in 2018.

Things have gotten even better this fall. Heading into Saturday's fall finale against 2-4 Friends University, the Threshers are a perfect 7-0 and sit alone atop the Kansas Collegiate Athletic Conference standings.

The highlight of the season came against fellow unbeaten Southwestern College on Nov. 7. After falling behind 21-3 in the second quarter, the Threshers rallied back in thrilling fashion.

The win put the team in position to finish the year in historic fashion. Bethel is still within striking distance of the school record for wins, a mark of nine set in 1984. The Threshers are also hoping to earn their first postseason berth since 2006 and first conference title since 2007.

However, those goals will have to put on hold until the spring. After Saturday, Bethel, which has had three games postponed due to coronavirus complications, won't play again until a March 6 makeup game at St. Mary.

The Threshers will also host Kansas Wesleyan on March 13 and are awaiting a makeup date for a road game against Tabor, which was postponed last weekend. If victorious in all three, they'll be in prime position to end their 14-year postseason drought.

Though the lengthy layoff isn't ideal for a team on such a hot streak, players aren't concerned about losing steam, expecting they'll pick up where they left off in the spring.

"I don't think there is a ceiling for this team," Underwood said. "I think we have the potential to go as far as we want."

With all seven local players set to return, many are hoping for an increased roles in future years.

Jake Maran has seven tackles in five games while brother Josh, also a sophomore, has played one game at quarterback. Maxwell, a sophomore running back, and Enriquez have not recorded stats during the 2020 season.

Given the chance to win together at a high level, the players are eager to build on the success they've found both on and off the field.