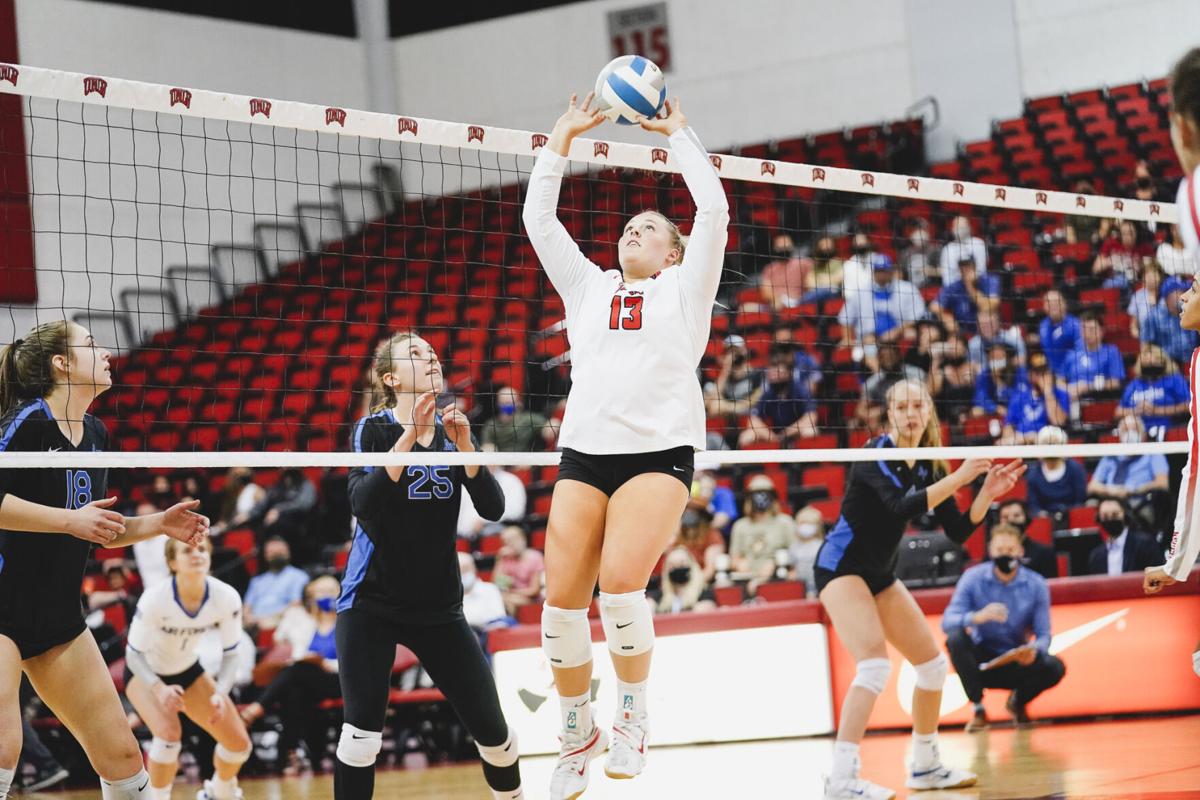 Setter Lauryn Burt, shown here in a win over Air Force on Sept. 30, played a key role on and off the court for UNLV in her four seasons with the Rebels following a standout career at Liberty High School. 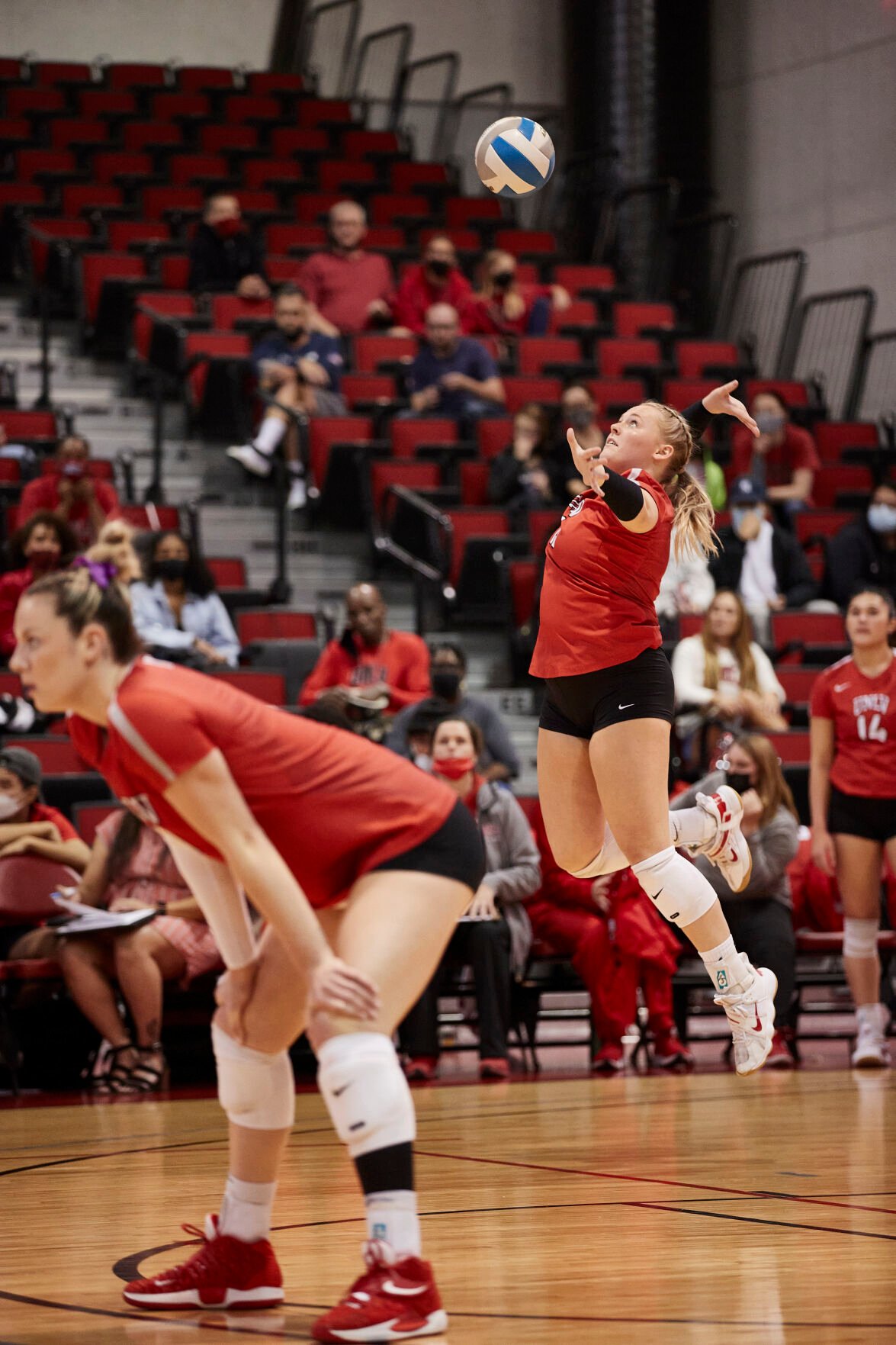 Burt had 22 assists and a pair of aces on Senior Night on Nov. 20. The matchup against the University of Nevada was UNLV's last regular-season game before what unexpectedly became an eight-game postseason, between the conference tournament and the NIVC.

Setter Lauryn Burt, shown here in a win over Air Force on Sept. 30, played a key role on and off the court for UNLV in her four seasons with the Rebels following a standout career at Liberty High School.

Burt had 22 assists and a pair of aces on Senior Night on Nov. 20. The matchup against the University of Nevada was UNLV's last regular-season game before what unexpectedly became an eight-game postseason, between the conference tournament and the NIVC.

The UNLV Rebels women’s volleyball team seemed poised to make a postseason splash in 2021. Playing the Mountain West Conference tournament on their familiar home court at Cox Pavilion, the Rebels outlasted top-seeded Colorado State in five sets the night of Nov. 25, behind 28 kills from Mariena Hayden and 26 assists each from setters Lauryn Burt and Arien Fafard.

But when they had to come back and face Boise State the next day at 1 p.m., they fell to the Broncos for the third time that season.

For a team with its sights set on a return to the NCAA Tournament, the loss was a crushing blow. “A heartbreaking end,” as UNLV’s own website called it. For the team’s four departing seniors, including the Bakersfield native Burt, it was an anticlimax.

But coach Dawn Sullivan had a contingency plan. She had been speaking with the National Invitational Volleyball Championship, a secondary competition for teams that do not make the tournament. She hadn’t mentioned it to her team because NCAA glory was always the goal.

“But when that didn’t happen, I never feel like I lose an opportunity to play,” Sullivan said. “Life is about a lot of lessons in our world, and if we can have one more opportunity to learn, and to grow, I always want to provide that for our student-athletes.”

And the Rebels seized that opportunity. A week after walking off the floor at Cox Pavilion for what they thought was the last time, Burt and the seniors were back in Tucson, Ariz. UNLV won five straight games away from home including three 3-0 sweeps, beating three teams in their home gyms and clinching the program’s first postseason title at Valparaiso.

For Burt, the team’s dominant road performance was the culmination of its season-long preparation. The coaching staff gave the Rebels the chance to play in a variety of road tournaments early. They knew the routine of travel and could handle the unexpected: “I took two or three of my finals in El Paso,” Burt said.

And they were used to big hostile crowds, having played in front of over 4,000 fans at BYU. A couple thousand at Valparaiso seemed trivial in comparison.

“I wasn’t even fazed, to be honest,” Burt said.

For Sullivan, who was hired in 2018, the end of the season means the graduation of her first recruiting class. She said she was lucky to get Burt back then; she committed late, in April, choosing UNLV over five other Division I offers, telling The Californian at the time she wanted to be “100 percent positive.”

Sullivan knew the setter would be a crucial acquisition at the start of her tenure.

“She’s the type of individual that needs to really build this program,” Sullivan said, “and I think she just has an incredible personality and work ethic.”

For her part, Burt admits she was a bit intimidated by Sullivan at first, with her coach’s pedigree as an All-American at Kansas State and longtime tenure as a Big 12 assistant.

“When I first came in, I was kind of like, ‘You want me? Are you sure? I’m just a girl from Bakersfield,’” Burt said.

But with a young roster that featured three freshmen and 11 sophomores, Sullivan had Burt on the court right away her first year, and that gave her confidence that she could perform at a Division I level. Though she got injured early, she was a consistent contributor all four years.

Burt tallied 1,870 assists in her four years, with her best per-set average coming in her abbreviated 14-game junior season as the team made an NCAA Tournament run in the spring. She came close in 2021, when she had to play in 36 matches beginning just a couple months later.

“I loved it, because I was ready to play back-to-back,” Burt said. “Being in season is always the best part.”

From the beginning of Burt’s career, Sullivan admired her compassion, her ability to balance “how to give to others, but also how to get the most out of others,” which often took on a more literal meaning on the court.

“In the role she was in as a setter, you do that day in and day out,” Sullivan said.

As Burt built experience, “lived a lot of different lives,” her generous attitude also made her well-suited to a mentorship role later in her career, Sullivan added.

Sullivan said she and her players often discuss legacy, and as motivational as the precedent of an NIVC title may be for future UNLV teams, it’s the selfless attitude of this senior class, and Burt in particular, that sets a standard going forward.

“I’ll remember how kind her heart is,” Sullivan said, “and what she would continue to give over and over to everybody else around her.”