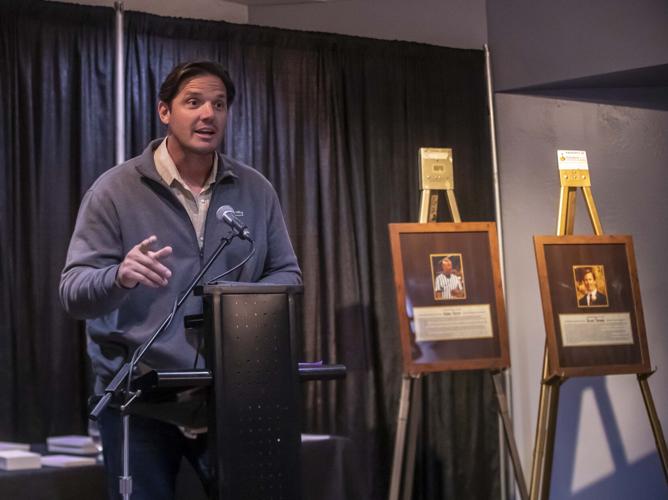 Bob Elias Hall of Fame inductee Jeremy Staat speaks to the audience during the annual luncheon at Mechanics Bank Arena on Thursday. 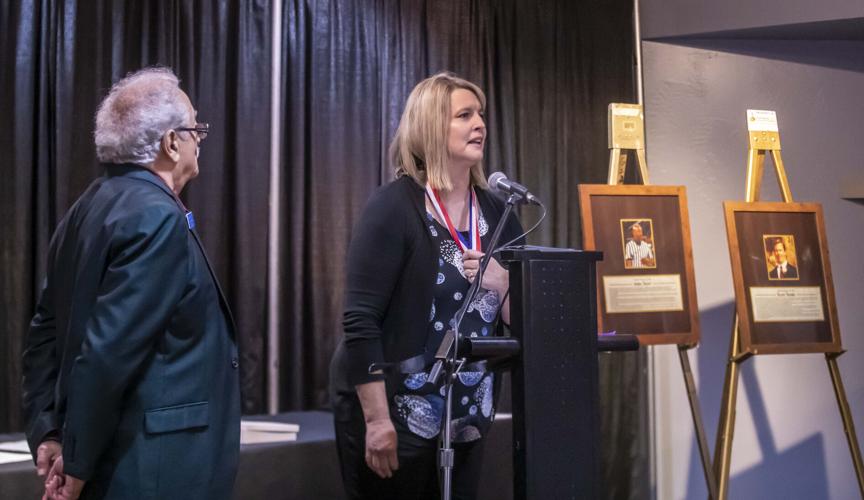 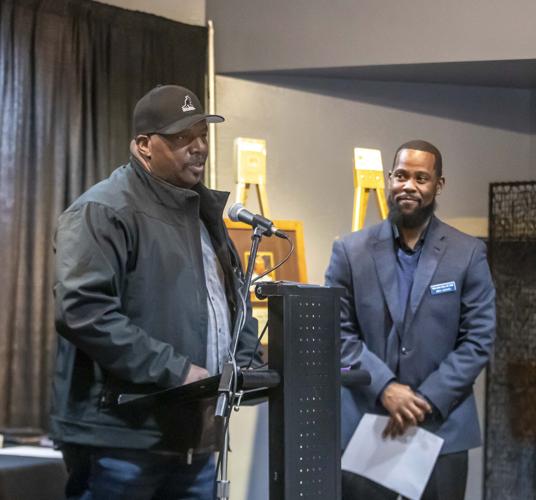 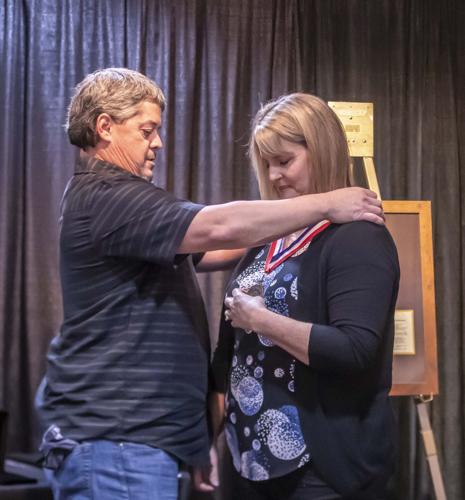 Bob Elias Hall of Fame inductee Melisa Weis-Barron gets help from her husband, Chris Barron, as he puts on her official medallion during Thursday's luncheon at Mechanics Bank Arena.

Bob Elias Hall of Fame inductee Jeremy Staat speaks to the audience during the annual luncheon at Mechanics Bank Arena on Thursday.

Bob Elias Hall of Fame inductee Melisa Weis-Barron gets help from her husband, Chris Barron, as he puts on her official medallion during Thursday's luncheon at Mechanics Bank Arena.

After its induction dinner was canceled in February due to the pandemic, the Bob Elias Kern County Sports Hall of Fame came back strong Thursday with a new set of inductees for 2021.

Mary Margaret Revell Goodwin, Jeremy Staat, John Tarver, Shelly Wallace and Melisa Weis Barron will be honored Feb. 17 at the Bakersfield Marriott. The board of directors officially announced the class over lunch at Mechanics Bank Arena Thursday afternoon, right across the concourse from the Hall of Fame exhibit itself.

Staat, now a welding instructor at Bakersfield College, and Barron, a special education teacher at Liberty High School, were on hand to accept their medals.

Staat was the first inductee acknowledged. An NFL lineman who got his start at Bakersfield High School and Bakersfield College, Staat later became a friend of Pat Tillman during their tenure at Arizona State University, and ended up spending four years in the Marines before returning to Bakersfield.

"I wouldn't have gotten to the level of accomplishments that I have without the support of the community," he said.

Next up was Goodwin. A Shafter native who graduated Garces Memorial High School in 1955, Goodwin set world records across the globe with her ocean-swimming prowess.

"A lot of women weren't competing in sports in 1955," said Joan Finch when recounting Goodwin's accomplishments. "There weren't programs then, so she was really setting the bar for women around the world."

Goodwin swam the Strait of Gibraltar, for example, in seven hours and 13 minutes in 1962, and later became the first woman to cross the Mackinac Straits. As if that wasn't enough, she turned to long-distance running later in her life, at one point running the length of Japan.

Goodwin also lived underwater for a day, worked at the Pentagon and, at 84, is trying to open a women's history museum in Maryland.

Wallace attended Delano High School and excelled in three sports before honing in on basketball, a choice that resulted in her smashing a variety of school records at the University of Arkansas in the late-80s. Most notably, she is the Razorbacks' all-time leading rebounder at 1,013, a margin of 228 over the next closest player. She now works as a business consultant in Dallas.

Tarver played four years in the NFL after a successful stint at the University of Colorado, starring in landmark wins against Penn State, which hadn't lost in 31 games, and Ohio State, which had won 19 straight at home. ("So I guess he was the streak-killer," Ken Calvin said in Tarver's introduction.) He got his start at Arvin High School and Bakersfield College.

Tarver was part of a big athletic family that looked to him as an example, as his cousin Tim Tarver said when accepting the award on his behalf.

"Those dreams that you have as an athlete, as an individual? They can come true," Tim Tarver said. "Look at John. I mean, we've been so blessed with that athletic ability ... God put his arms around us and he guided us."

Barron made her mark immediately as a track and field star at Bakersfield High School, winning three straight state titles in the discus. She continued to excel at UCLA, at Colorado and on the national and global stages, including at the American indoor track and field championships in 1995.

"It was many years of work," Barron said, "10 years where I trained and I didn't do anything but train, and I feel like this is just another step in all that hard work paying off."

The class will convene at the Marriott for their official induction in February.

The Bob Elias Kern County Sports Hall of Fame found itself in uncharted waters in 2021, canceling its annual induction dinner for the first ti…