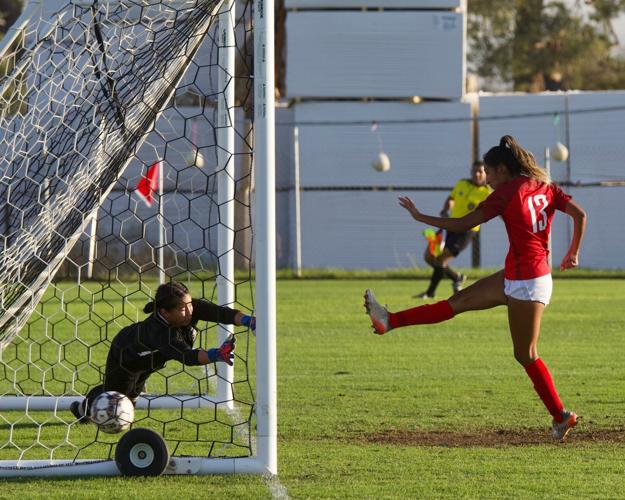 Bakersfield's Karla Esqueda Cardona makes the first and only goal of the Renegades' Oct. 4 match against Santa Monica, securing the 1-0 victory for Bakersfield College. The teams will face off for a third time Wednesday in Santa Monica. 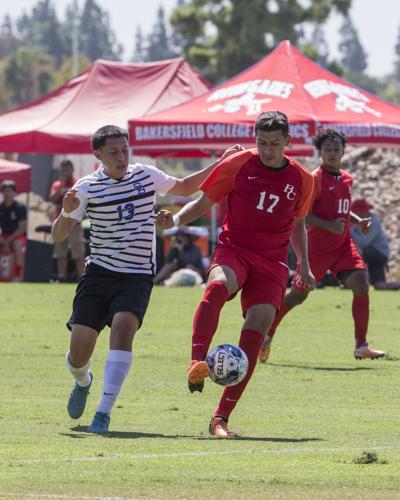 Bakersfield's Karla Esqueda Cardona makes the first and only goal of the Renegades' Oct. 4 match against Santa Monica, securing the 1-0 victory for Bakersfield College. The teams will face off for a third time Wednesday in Santa Monica.

After covering nearly half of the Southern California playoff field in a brutal nonconference schedule, it's no surprise the Bakersfield College men's soccer team finds itself in a postseason rematch.

While the Renegades previously played against each of the top four seeds, their first-round opponent will instead be the unlikely team that put in the most goals against them all year: No. 17 San Bernardino Valley.

BC will be hoping its 5-2 loss in September was a fluke. The Renegades would certainly have good reason to think so, as the match was played in record heat. Temperatures reached 115 degrees that day, clearing 111 on Sept. 6 for the first time since 1904. The kickoff moved around from time to time throughout the day and ultimately occurred at 11 a.m.

Wednesday's rematch in the Southern California playoffs is slated for a more civilized 2 p.m. start and, more importantly, will enjoy highs in the mid-60s.

BC and SBVC enter with similar records — the Renegades at 8-6-6, the Wolverines at 9-8-2 — but experienced league play dramatically differently, as BC went unbeaten in conference and, on its final matchday, snatched the league title from Antelope Valley with an intense 3-2 win. SBVC, meanwhile, won its first three games before finishing with just four points in five games to come in third in the Inland Empire Athletic Conference.

Despite the Wolverines' offensive output in their September win, the two teams posted almost an identical scoring total on the year, with BC tallying 42 goals to SBVC's 41. One thing that was not a fluke on that infernal morning was the goal scored by forward Ebrima Njie, who leads the Wolverines with seven on the year. However, Brian Chavez and Quinten Ponsford, who combined for four goals that day, scored just three total across the remainder of the season.

SBVC will undoubtedly pressure goalkeeper Victor Melendez, as the Wolverines are No. 5 in the state in shots per game and tied for seventh in corner kicks.

BC's goalscoring is much more centralized than SBVC's. The creative playmaking midfielder Anthony Miron, who scored two in that pivotal clash with Antelope Valley, and strong striker Angel Sandoval, have combined to score 23 times. The pair tied to lead their conference with 29 points each.

The winner of Wednesday's contest on the hill has the privilege of traveling to play No. 1 Cerritos, which has been a death sentence for nearly every team this year — except BC. Three days after the Renegades lost to SBVC, they made the trip to face the Falcons and, despite getting outshot 23-4, held on for a 0-0 draw, becoming the only team to take a point off Cerritos in Norwalk all year. (The Falcons' only other time not winning this season was a 0-0 tie with Fresno at a tournament at Hartnell, and Cerritos won the tournament on penalties anyway.)

BC will hope to exhibit that same level of defensive resilience throughout the postseason.

The women's soccer team had a significantly lower chance of being paired with a familiar opponent, after playing a weaker non-league slate. BC went 5-0-2 in its first seven games, with the two ties coming against the only eventual playoff teams in Ventura and Cuesta.

When playoff pairings began to trickle in Monday afternoon, though, the 19th-seeded Renegades found themselves matched up against Santa Monica for the third time this year.

BC went 6-5-3 in a tough South division of the Western State Conference, the fifth of five teams among its membership of eight to reach the playoffs. The Corsairs (8-4-1) were third, thanks to a six-game unbeaten streak late in the year, and will host the Renegades as the No. 14 seed.

BC finished three spots short of a home game in the playoff seeding and could regret dropping a few close results throughout the year, like allowing an 88th-minute winner to rival Antelope Valley in Lancaster on Oct. 25, or another in the 82nd minute to a middling LA Valley team at home on Nov. 8.

The Renegades didn't leave any points on the table against Santa Monica, though. Despite finishing below the Corsairs in the final standings, BC beat them 1-0 in Bakersfield on Oct. 4 when Karla Esqueda Cardona seized on an errant back-pass in the goalmouth, and then Crystal Ramos Rosales supplied a clutch equalizer in a road draw four weeks later.

Both freshmen are among the Renegades' top scorers, but Olga Amador leads the team with nine goals, including three in the final four games. The Corsairs have a few more prolific players, including Ali Alban with 12 goals and Sophie Doumitt and Emma Rierstam with nine apiece, although it was Jacky Hernandez who drove home the lone score for Santa Monica in either matchup against BC.

The winner of Wednesday's rematch will travel to Mission Viejo to face No. 3 Saddleback — which fell just short of No. 2 Santiago Canyon in the Orange Empire Conference — on Saturday. That certainly doesn't bode well in terms of common opponents, as the Bobcats beat Canyons 4-2 on Sept. 20, and neither the Corsairs nor the Renegades could win one against the Cougars this year.

Playing on the road certainly isn't anything new for BC this season, which traveled for six of seven games during one challenging conference stretch and came out 3-1-3. That included the Renegades' draw against the Corsairs; they'll have to do even better this time.