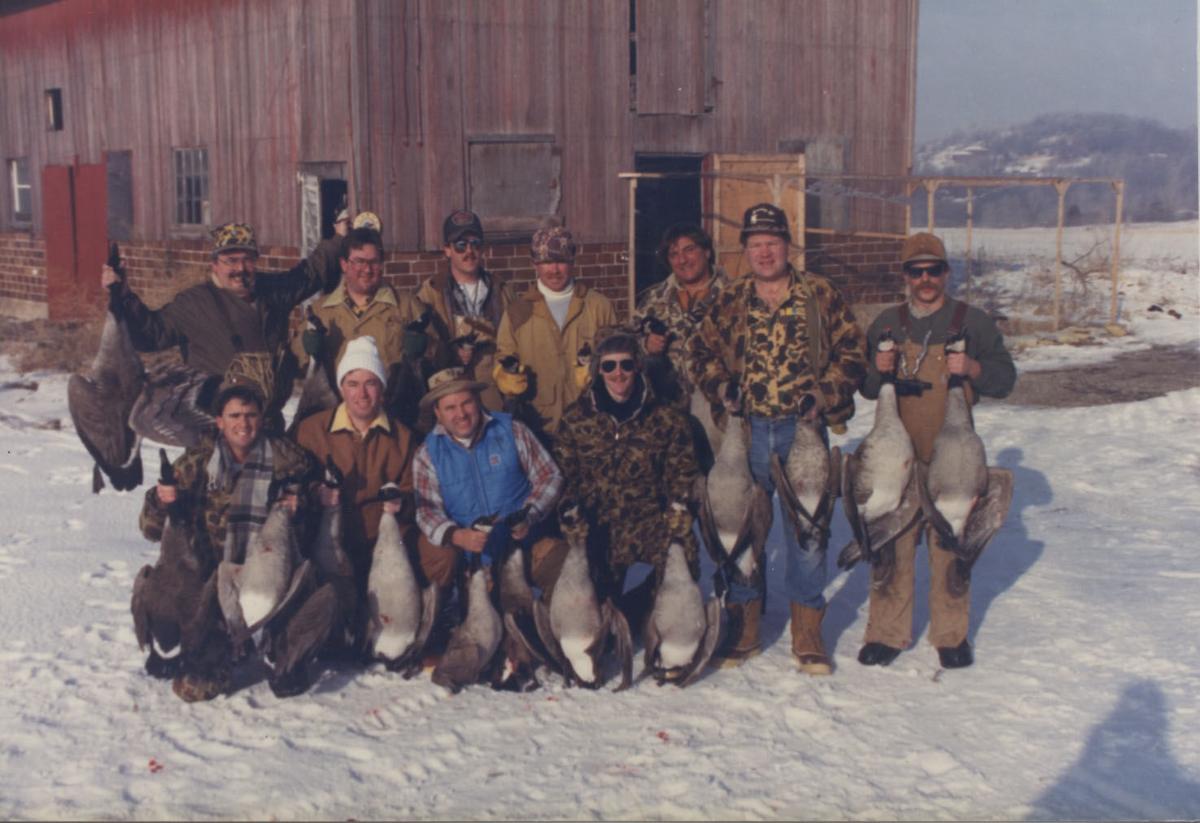 A group of happy hunters after a morning shoot just outside of Rochester, Minn. 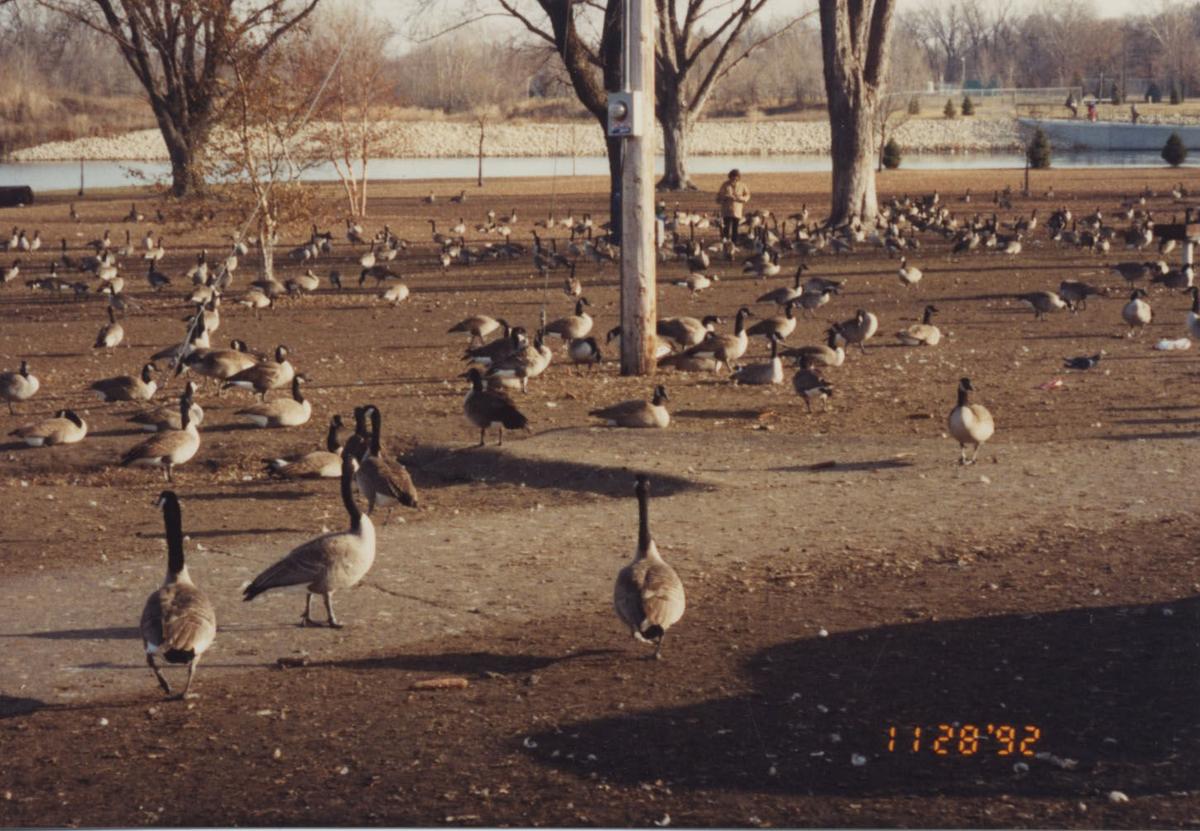 A group of happy hunters after a morning shoot just outside of Rochester, Minn.

A couple of years after Steve Merlo and I returned from chasing the giant Canada geese in Saskatchewan, he called me and said he had found another place that supposedly had a few giants. It was a small lake just a mile from downtown Rochester, Minn.

Silver Lake was fed from a river that had a hydroelectric plant, and the water stayed warm during the winter and was home to 20,000 to 30,000 Canada geese. We contacted a guide in the area and arranged a hunt that winter for Steve and our friend Adam Stull, who had been on the Canadian hunt with us. I would go along just to film.

We arrived in Rochester late afternoon and immediately called the guide to see what time to meet the next morning for the start of a three-day hunt. We were really surprised when he said 11 a.m.

Canada geese usually go out to feed shortly after sunrise and then return to their roost around noon-time. Then they go out again late afternoon and stay until almost dark and again return to the roost.

Our guide said the morning temperature would be below sub-zero, so the geese would stay on the water until their bodies warmed up. He said it took too much energy for them to stay warm and fly at the same time, so they just flew late and stayed out all day. This was the first I had heard this, but it made sense.

Since we were not getting up before dawn, we opted for a late dinner that evening. Just as we were walking across the restaurant parking lot, we could hear approaching geese calling. Suddenly, out of the darkness, a small group of geese appeared no more than 50 feet over our heads in the light of the parking lot. As they quickly vanished into the dark about 100 yards away, another bunch appeared. Then more ... and more. We all ran over to a fence line behind the lot and looked down into a canal that had to have at least 500 geese in it. Talk about excited! We hardly got through dinner anticipating the next day’s hunt.

The next morning we met the guide and followed him a few miles out of town to a huge, plowed cornfield that he evidently used frequently because it had a number of pit blinds scattered across it. They were all at ground level with roll tops and were fitted with propane heaters inside. Plenty of room for two hunters and their equipment.

It had snowed the night before and there was about two inches of white fluff covering the ground. The temperature was about five below zero, but it did not feel that cold because it was just clear and crispy with little or no wind.

The guide had some other clients beside Steve and Adam, and they decided to shoot as a group as far as the number of birds to be taken. I climbed into a blind behind the others because I had to keep my roll top open a little more so I could use my camera.

It wasn’t long before the geese started coming, and a steady fusillade of shots began. About an hour into the shoot, as I was getting some really great video, I saw Steve approaching from over a small rise in the field. I rolled my top back and gazed up at him as he stood there slump-shouldered and looking somewhat dejected.

He said, “Well, Barnes, they’ve banished me. They said I had killed too many birds and had to sit out the rest of the shoot.”

I asked him how many he had bagged, and he said he didn’t know for sure but some of the other hunters had not done too well. Not that they were not getting shooting; they just were not hitting them. He jumped into my blind and I continued filming for another hour or so.

Later, I brought up the subject of Steve’s shooting with Adam, and he said Steve had taken down nine big geese with no more than 14-15 shots. Awesome!

Late that afternoon, we took a drive over to Silver Lake to watch the geese returning from the fields they had been in all day. What an incredible sight. I was expecting a huge lake, but instead I saw a body of water that could not be more than 50-60 acres. As we drove up next to the water by a park, hundreds of geese walking around along the shore were moved by our rental car. We looked like a ship going through a sea of Canada geese. The city had installed feeding machines so you could buy packets of corn and hand-feed the geese and ducks that were everywhere.

I saw one mallard duck that was so large I doubted if he could fly. Had to weigh at least 8-10 pounds from eating all that corn every day. And the last hour before sundown was an inspiring vista of thousands of geese coming back to water for the night. I took a video of one flock whose wings were locked up from high in the sky and over a mile away. Their wings never moved until they hit the water.

After three days of steady, good hunting we still did not bag what we would call a Giant Canada. I’m sure Silver Lake had some scattered about, and we did manage to get four or five in the 13-pound range, but none with the true markings of the giants. All in all, it was another great trip shared with great friends, and I look forward to some day going on another quest. I have heard that North Dakota is a good spot...

Ken Barnes is a record-setting shooter and a longtime Kern County outdoorsman. Email him with comments or column ideas at ken.barnes@aol.com.