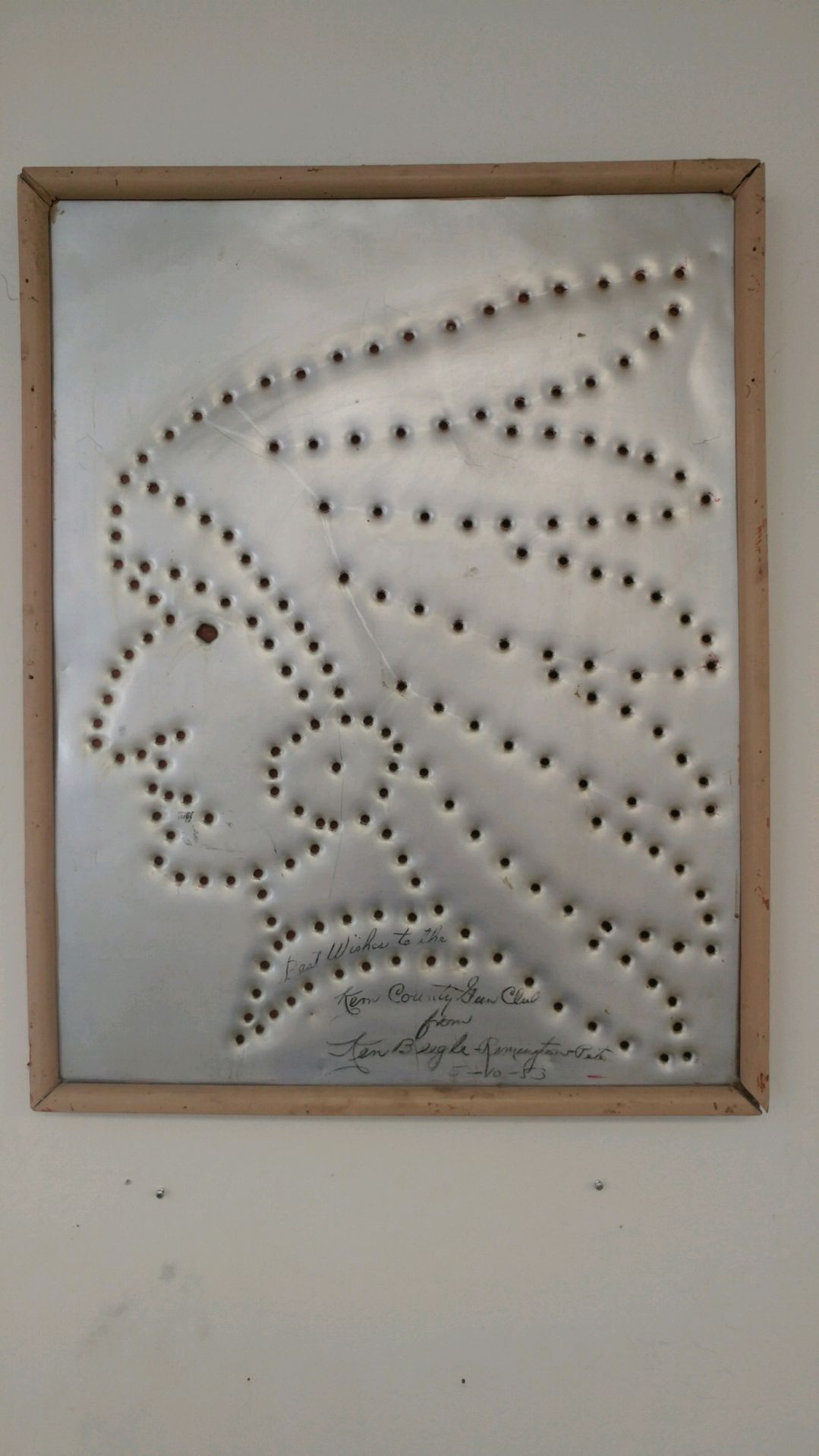 This caricature “Indian Chief” created in the 1950s by Ken Beegle, a Remington Arms Company Exhibition Shooter hangs on the wall at the Kern County Gun Club.

I first started shooting skeet in 1962 when I was invited out to the Kern County Gun Club by my friend Pete Lokey, who owned Westchester Bowl.

Pete and I bowled together in a couple of leagues and were also fall-season pheasant hunters. I didn’t know what “skeet” was at the time, but it did not take much to get me hooked on the sport.

The gun club at that time was located on the Kern River just below Bakersfield College. I remember walking into the clubhouse that first time and noticing an item (pictured) hanging on the wall. Someone told me it was shot there at the club back in the 1950s by a Remington Arms Company employee named Ken Beegle.

It was about two feet by three feet in size and was signed by the artist. I remember thinking, “Wow...someone really has great eyes.”

When I noticed it recently hanging on the wall at the new club location north of Buena Vista Lake, I decided to do a little investigating about the artist. Some of the following quotes are from a 1957 edition of “Gun Annual.” Beegle was a native Missourian who became very proficient with both a rifle and shotgun as a young man, and he had no problem picking off squirrels, ducks and geese.

During World War II he was hired by the government to instruct GIs in hitting moving targets with small arms. He did this in large training centers with grandstands full of troops. After the war he became an exhibition shooter for Remington and performed in most major cities across the nation. His sketches of “Indian Chief,” “Buffalo Bill,” and “Hank the Game Warden” were all drawn using a .22 caliber automatic rifle on a canvas of sheet aluminum.

And, as the magazine noted, “it was all in a day’s work for him to toss three eggs into the air from between his legs – much the same as a football player centering the ball – then spin around, raise a 12-gauge shotgun, and, with three separate blasts, transform the hen fruit into a trio of air-borne egg nog.”

Beegle always claimed he was not a trick shooter. The only two tricks he had up his sleeve were keen eyesight and perfect coordination.

“With a Model 550 autoloading .22, he tosses a steel disc the size of a silver dollar into the air,” reads the magazine. “As the disc soars, he fires a shot that hits it on the right side and sends it flying toward the left. Another disc he hits on the left side and drives it to the right. A third bullet hits another disc and socks it higher into the air, and a final round slams a flying disc on the top and drives it into the ground.

“With a Model 760 slide action repeater, he throws an orange, a grapefruit, a cabbage and a colored ball out before him and slams each with a 110 grain, 30-06 bullet before it hits the ground. With a Model 870 Wingmaster in 12 gauge, he works on three one-quart oil cans stacked one atop the other.

“The bottom can, filled with water, he hits with a slug. The eruption sends the two top cans into the air, and he blasts each with two shot shells while they’re still spinning.”

When doing the “Indian Chief” like the one pictured, Ken would get off almost 200 shots in less than three minutes from 20 feet away.

The unmistakable outline of the characters he did established Ken Beegle as a master of fine art exhibition shooting. His wife, Blanche, was his shooting partner during his travels, and she was also widely known for her expert marksmanship.

After one of my recent columns about Black Brant shooting at Morro Bay, my old friend and guiding partner, Ron Hurlbert, called me and said he had heard there were very few birds in the bay anymore and that the eel grass beds were almost completely gone.

This was news to me, so I decided to look into it. It seems he was right. According to a report from the Morro Bay National Estuary Program, the eel grass acreage and the Brant bird count in the area are in very drastic declines. The report showed that eel grass acreage has shrunk from 435 acres in 1994 to an unbelievably low of 13 acres in 2015. The number of Brant seen in the bay has fallen from 3,400 in 1994 to only 250 in 2015.

These are really amazing figures. When I used to guide at Morro Bay in the early 1970s, it was common to see between 5,000 and 8,000 birds at any time during February. And to my eyes, it seemed like the majority of the bay was covered in eel grass except the north portion, where there was a large area of oyster beds.

Eel grass is an extremely sensitive species that can only grow in certain environments. Available light, saltwater/freshwater mix, water clarity and temperature, tide flows and elevation in the estuary all contribute to its growth. A huge replanting effort was started in 2012, but it has not been very effective.

Because the grass is the sole diet of the Black Brant, it looks like a bleak future for the birds in Morro Bay unless something changes soon.

I was saddened to read about the passing of Gene Thome, owner of Bear Mountain Sports. Gene was one of those unique individuals you are lucky to meet during your lifetime. One of a kind. He gave so much locally to so many, including being one of my sponsors for my skeet shoot every year. He was also named Kern Sportsman of the Year in 2010. He will be missed by many.

Ken Barnes is a record-setting shooter and The Californian’s outdoors columnist. Email him with comments or column ideas at ken.barnes@aol.com.