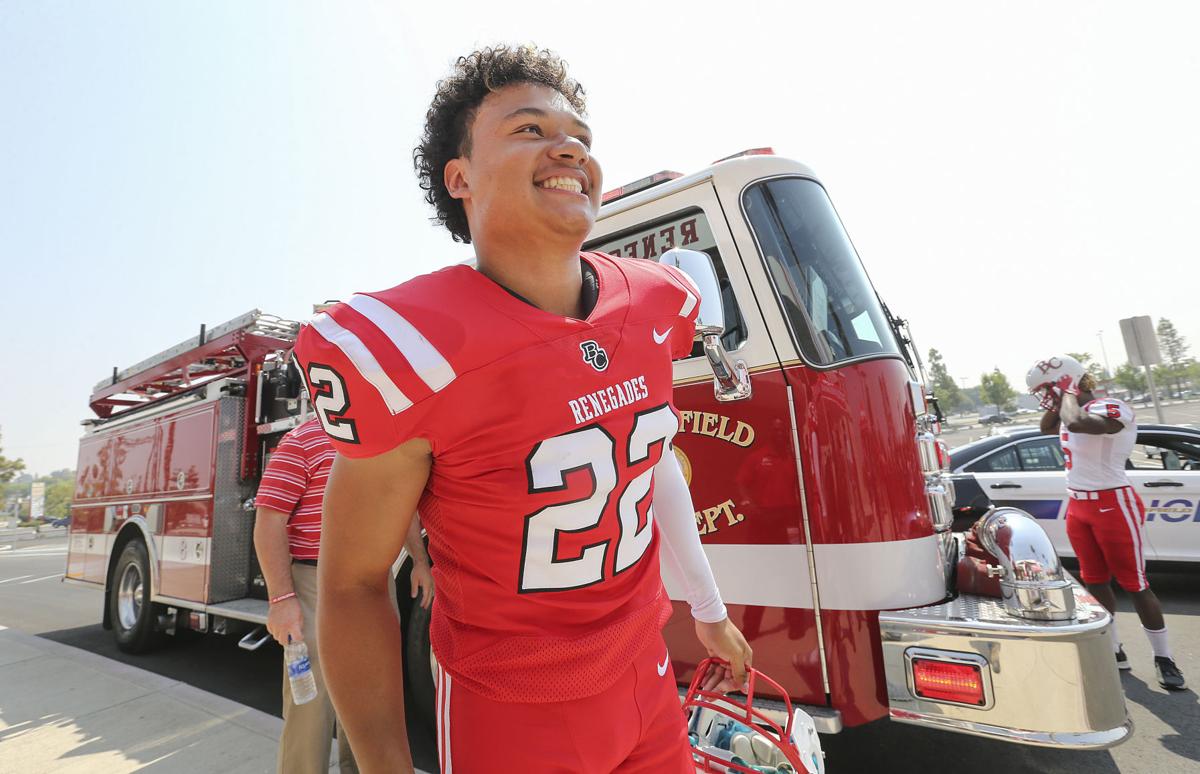 Bakersfield College wide receiver Cameron Roberson arrives to BC's 2018 football media day on a fire truck with a smile on his face and a brand new uniform. 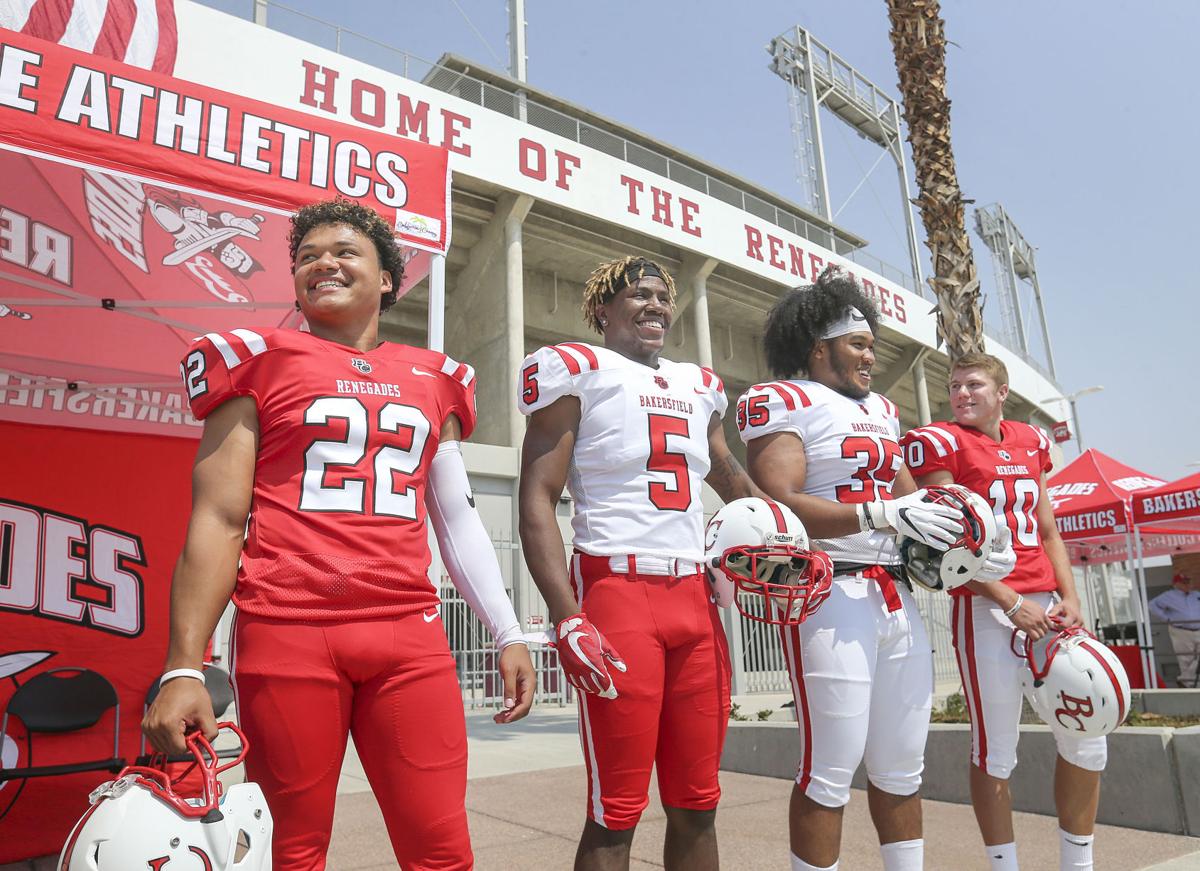 Bakersfield College football players Cameron Roberson (No. 22), Elisha Ortiz (No. 5), James Thomas (No. 35) and Carson Olivas (No. 10) show off their new 2018 uniforms on Thursday. 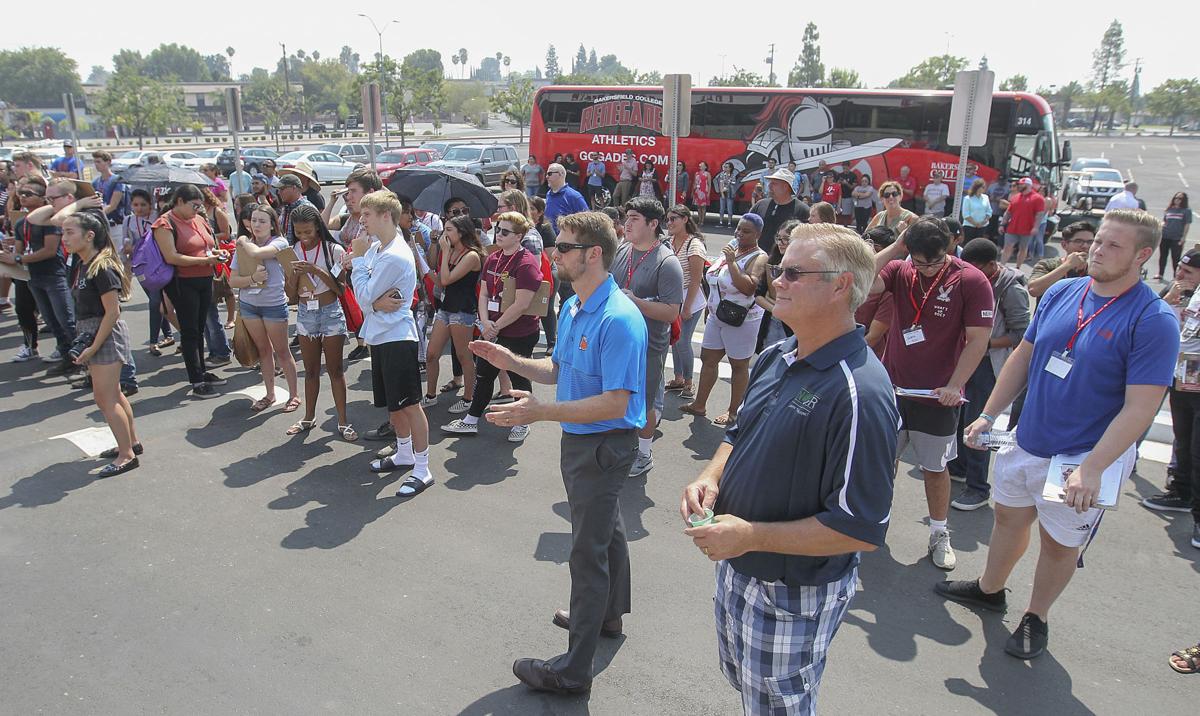 Bakersfield College wide receiver Cameron Roberson arrives to BC's 2018 football media day on a fire truck with a smile on his face and a brand new uniform.

Bakersfield College football players Cameron Roberson (No. 22), Elisha Ortiz (No. 5), James Thomas (No. 35) and Carson Olivas (No. 10) show off their new 2018 uniforms on Thursday.

Bakersfield College football coach Jeff Chudy was in rare form on Thursday, letting jokes fly about being late to his wedding, the temperature, uniforms and his starting roster.

It signaled the start of the 2018 BC football season — though the first practice in full gear (helmets, shoulder pads and pants) a little earlier in the morning brought a drastically different demeanor from the 15-year head coach.

“We feel like we’ve got a lot of the pieces to this puzzle,” Chudy said of his 2018 squad. “We’re still not there yet. We’ve got 18 workouts before we play our first game so keep that in mind as you ask questions about who’s starting.”

After the Renegades Thursday practice, the program hosted what they termed as BC Football Media Day, which featured a handful of students, BC president Sonya Christian, Bakersfield mayor Karen Goh and the city fire department.

Chudy addressed the crowd and players unveiled the team's new uniforms for the 2018 season in what essentially amounted to a preseason pep rally.

On the practice field, Renegades’ fall camp started on Monday with helmets. Friday will be a shorts, helmets and shoulder pads all special teams practice to help the players regroup. The team will be back in full gear on Saturday for a practice that will include a “scripted contact period,” Chudy said.

Even the first two-thirds of the first week took its toll despite Chudy not allowing any live hits on Thursday.

“We’re kind of going through the aches and pains of putting on gear for the first time,” Chudy said. “ The training’s different a little bit, legs a little weary right now.”

Still, the players were happy to be back in uniform and gearing up for a new year. BC opens the season at Mt. San Antonio College on Sept. 1 before playing its first home game against El Camino on Sept. 8.

“You put on the pants and stuff and it’s a little different, but it’s not anything that we’re not used to,” sophomore receiver Cameron Roberson said. “... It’s just been a great first day, honestly. We had a great team practice.”

As far as BC’s new uniforms are concerned, the school has switched over from Russell to Nike. The shade of red is a little bit lighter and there’s a “BC” logo on the front of the collar.

Chudy noticed the players talking about the uniforms and posing for photos as he walked out. He said they better run faster, jump higher and get some wins because of it.