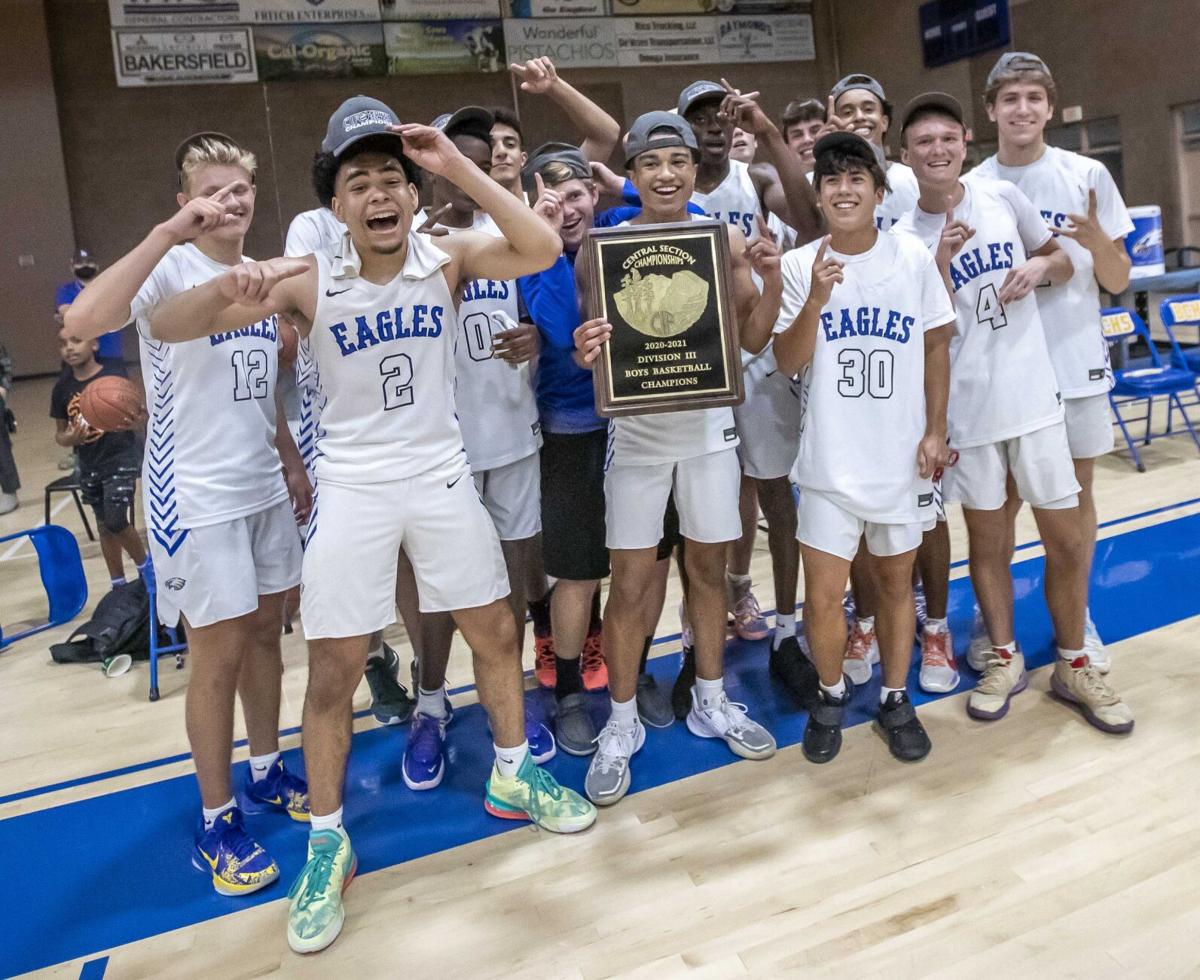 BCHS players celebrate after their win over Nipomo in the Division III sectional championships Friday at Bakersfield Christian High. The Eagles will host Valley Christian in the first round of the Division 3-AA Boys Basketball Championships Tuesday. 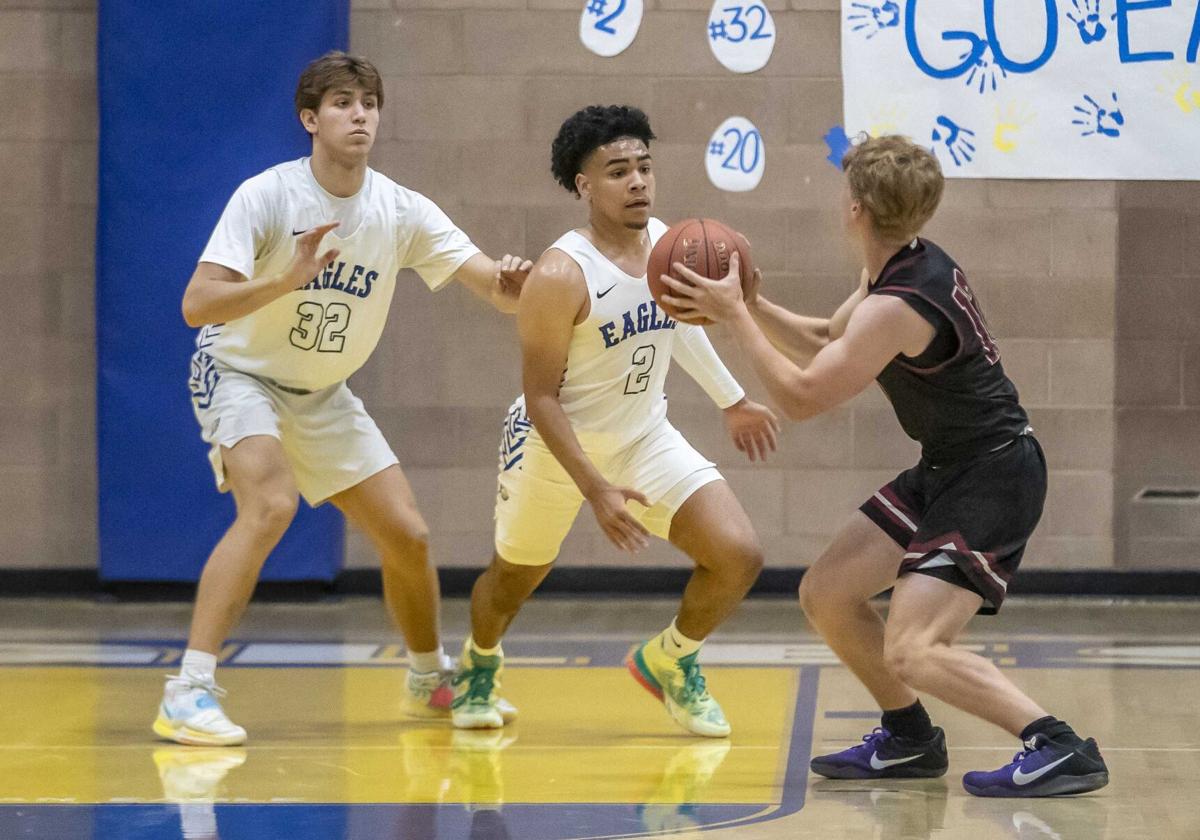 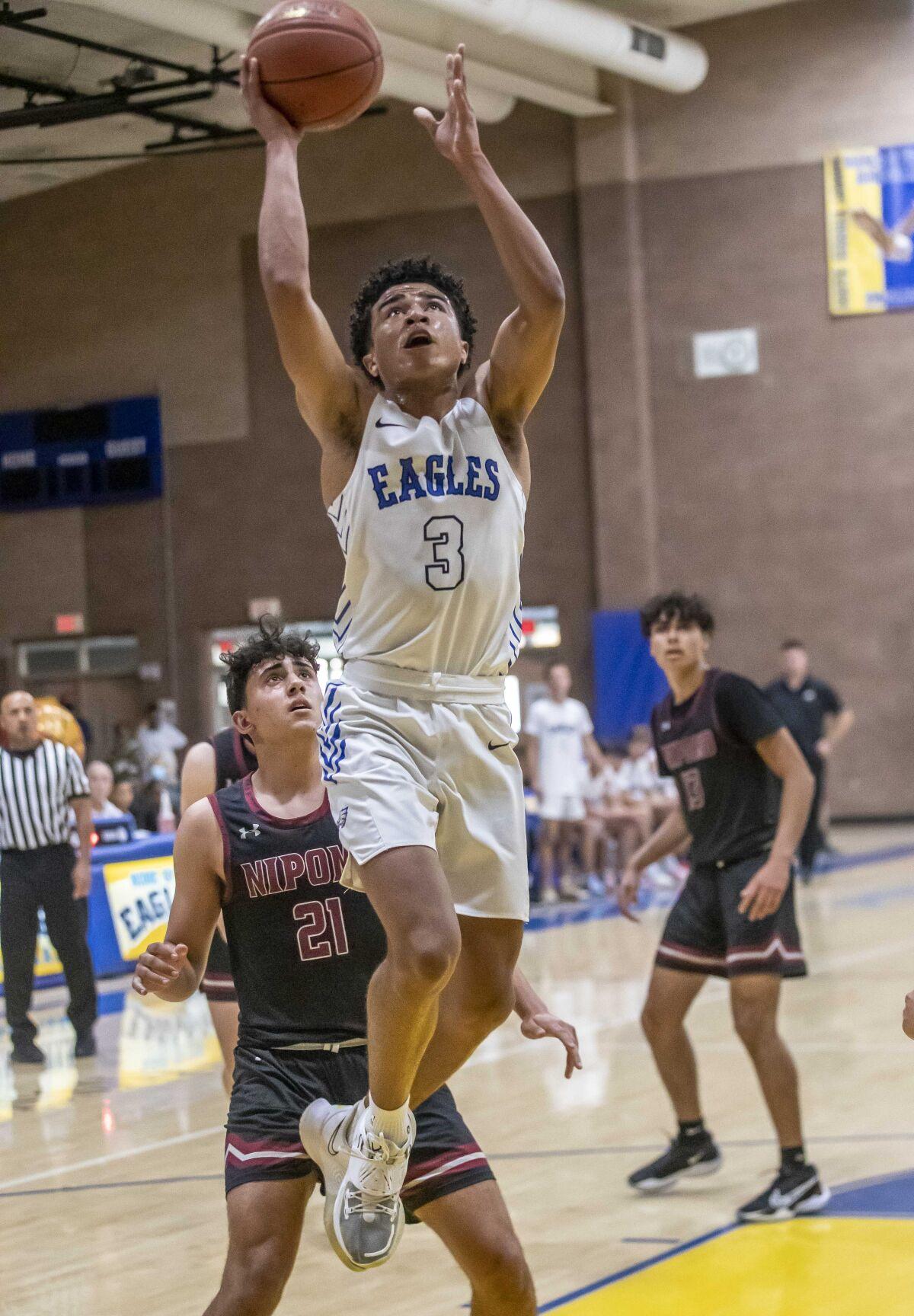 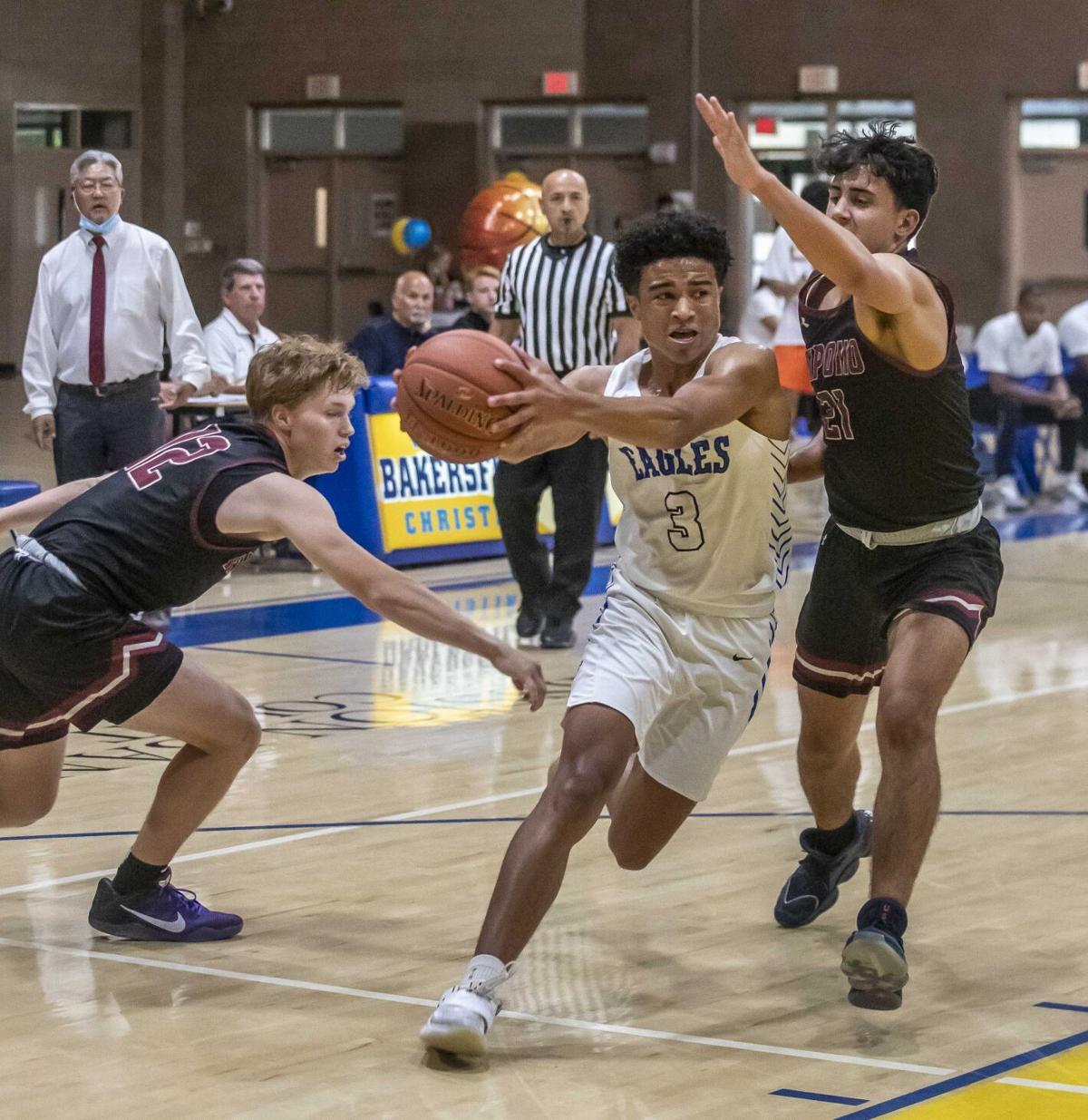 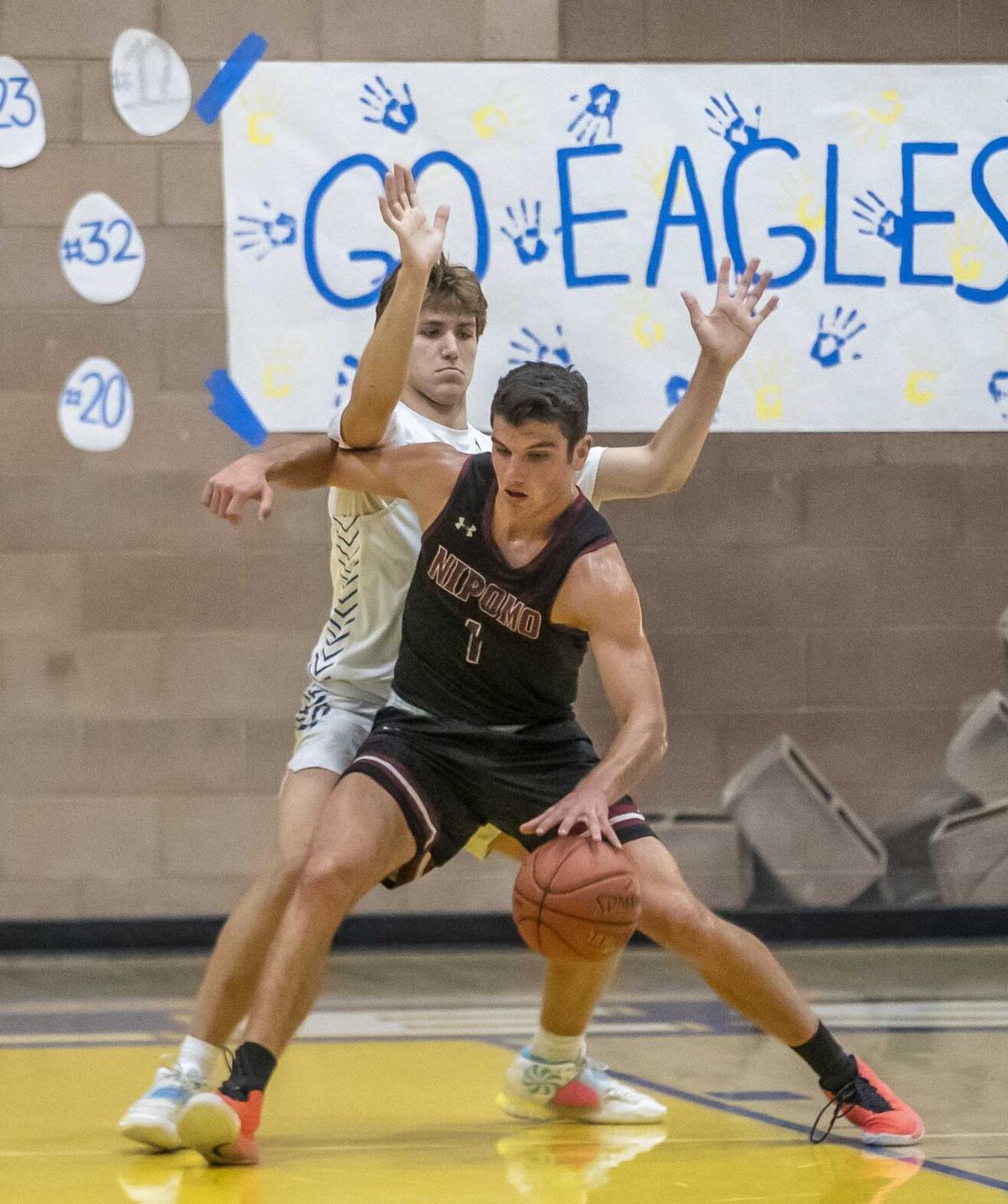 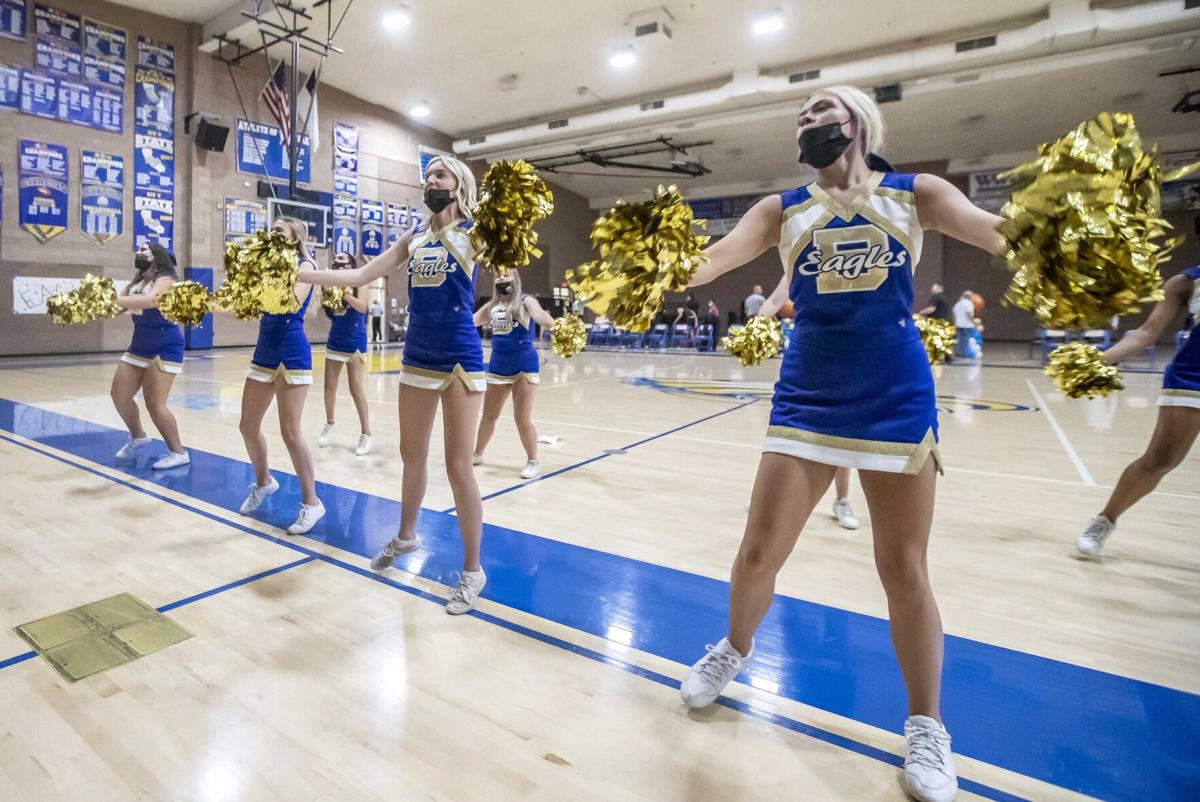 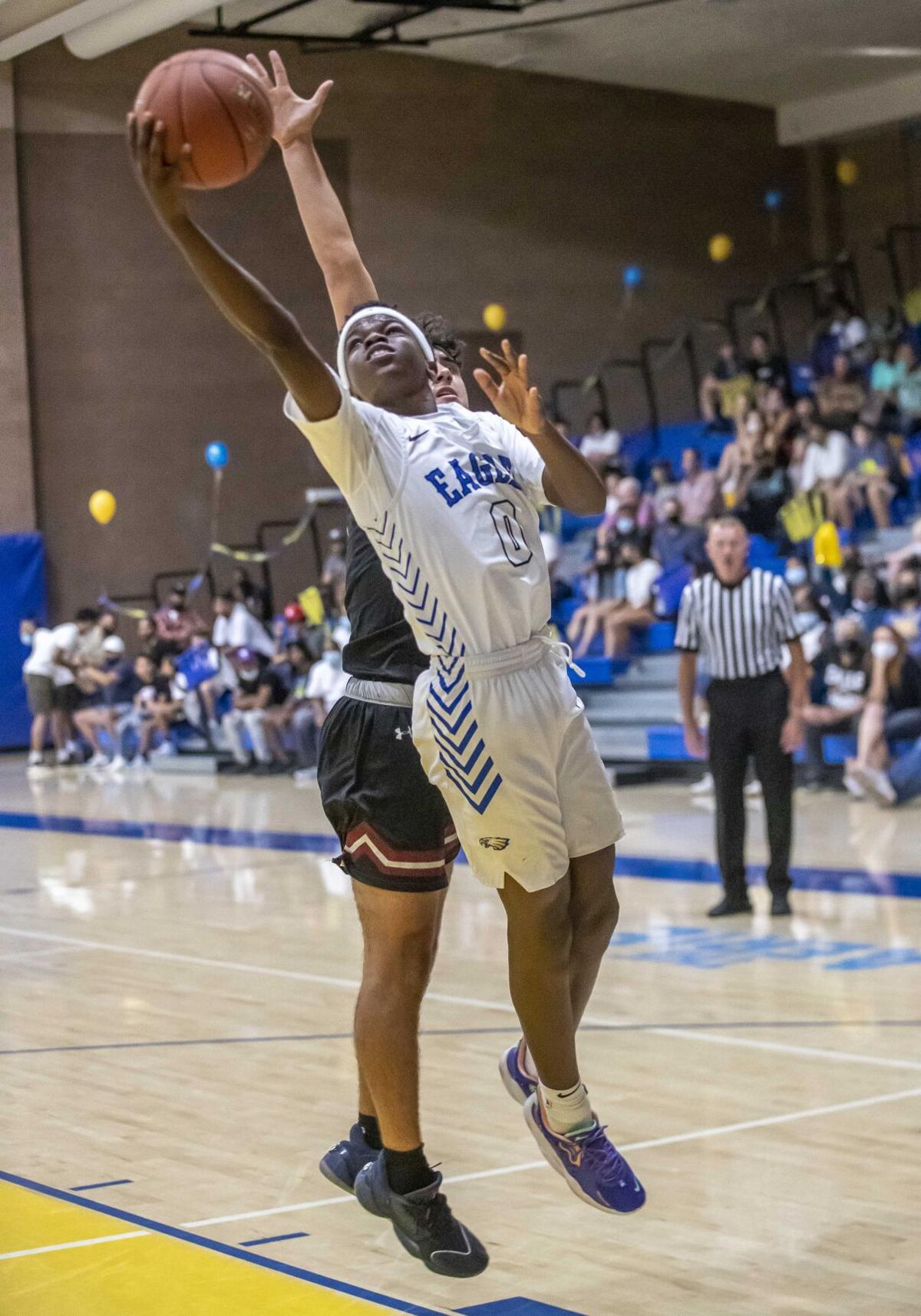 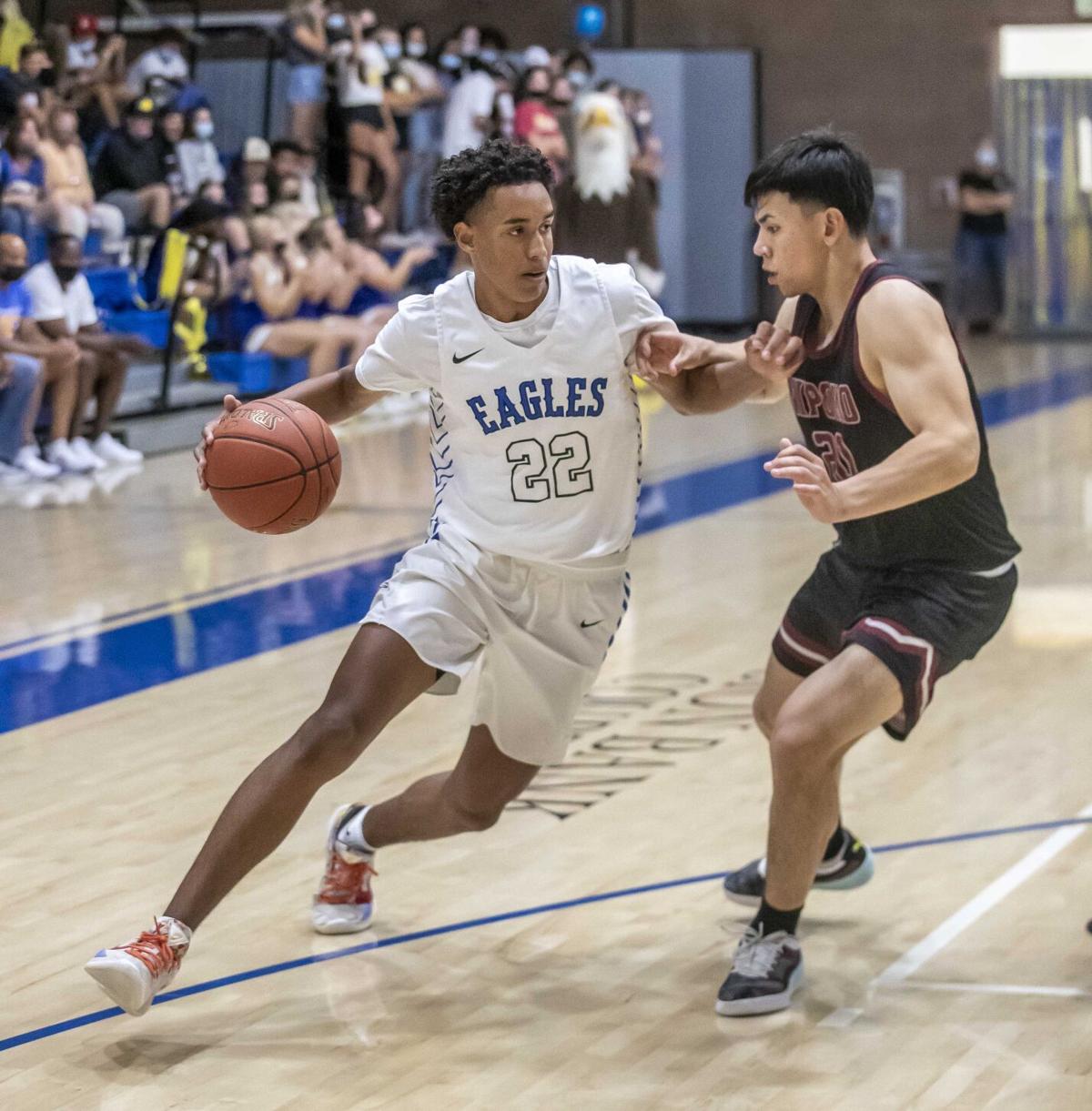 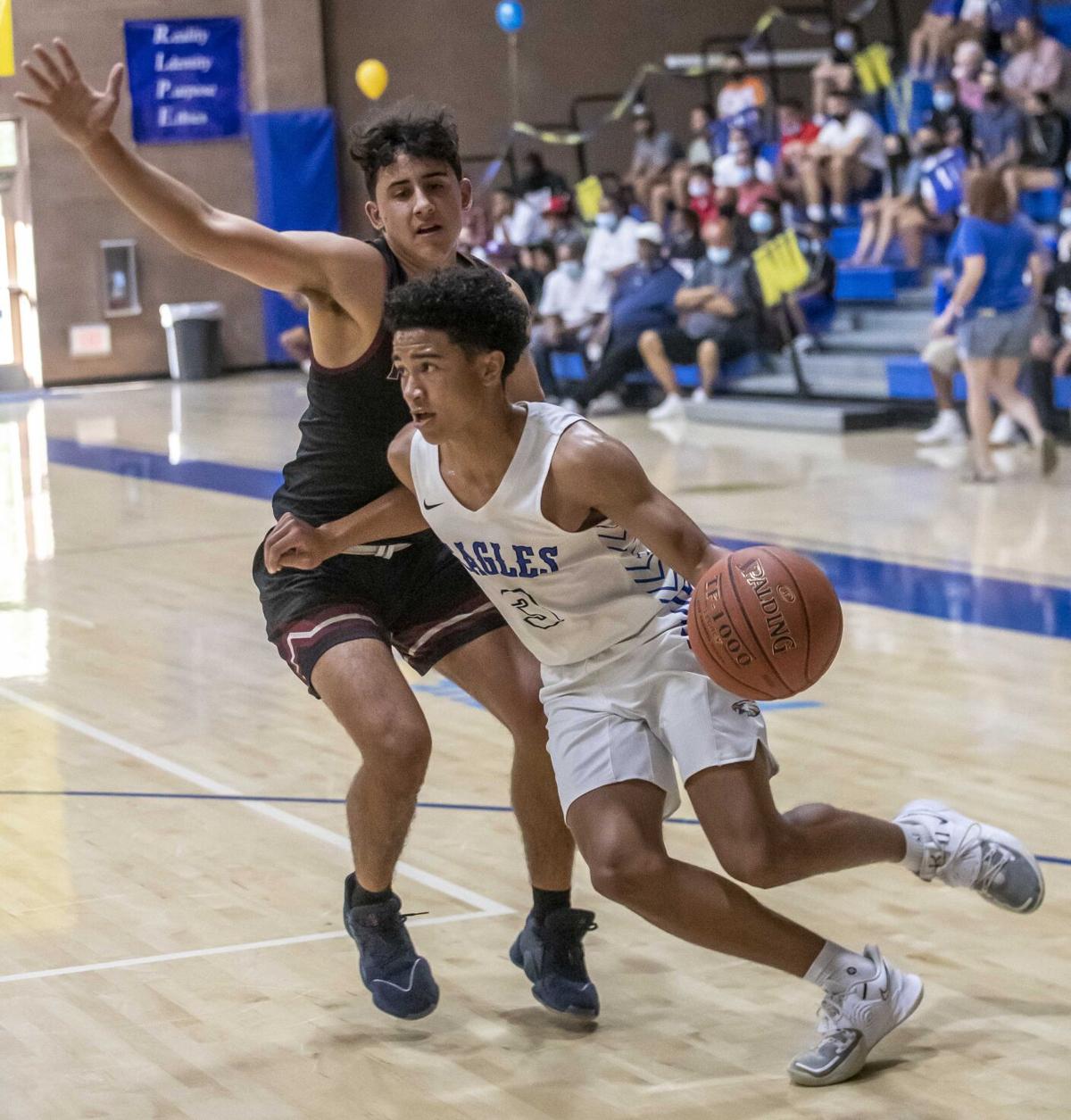 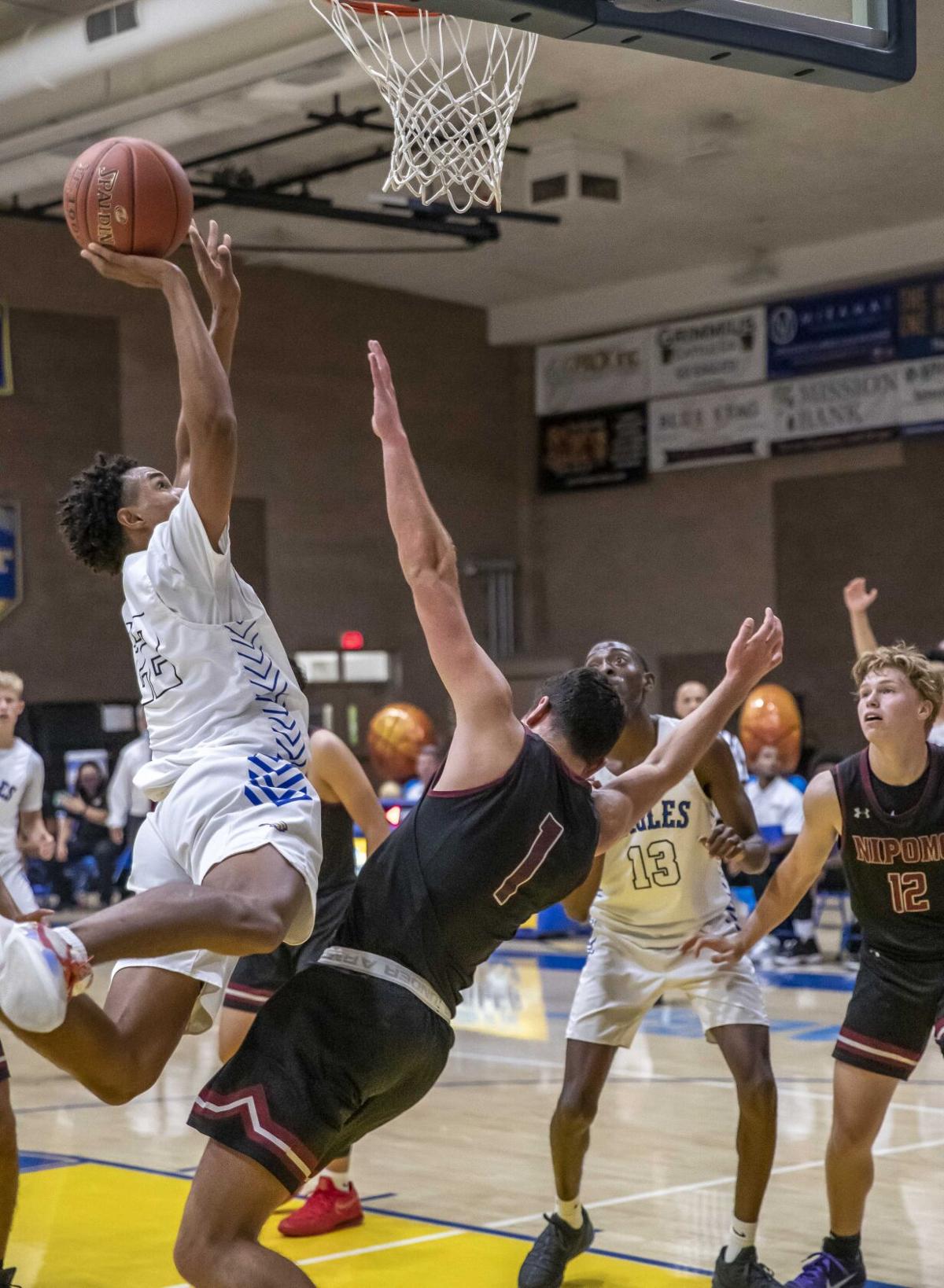 BCHS's Jackson Tucker, left, is fouled by Nipomo's Louis DiModica in the second half of the division III sectional championships Friday at Bakersfield Christian High. 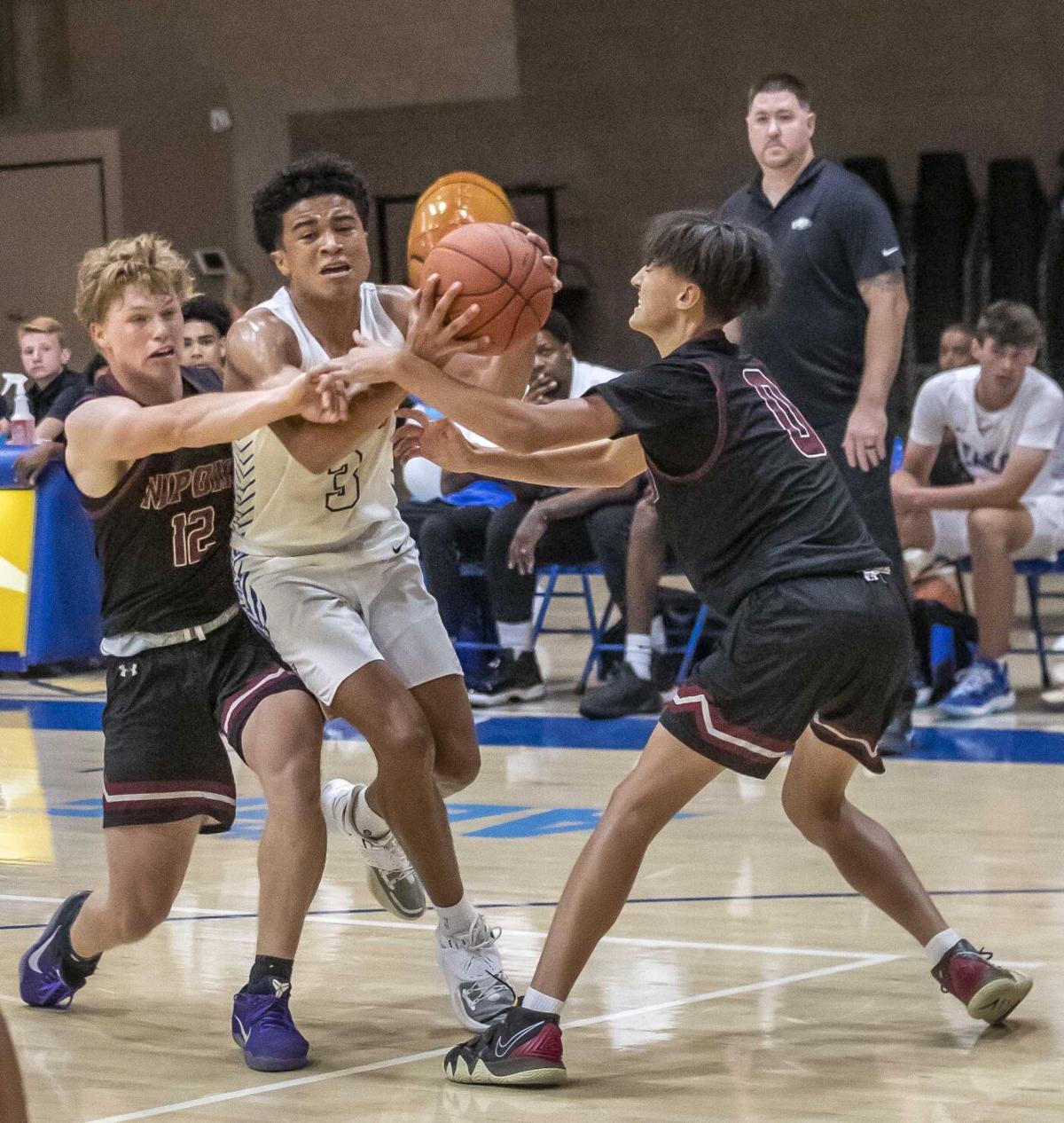 BCHS's Seth Marantos (3) drives to the basket as Nipomo's Nate Reese (12) and Lucca Hart defend in the second half of the division III sectional championships Friday at Bakersfield Christian High. 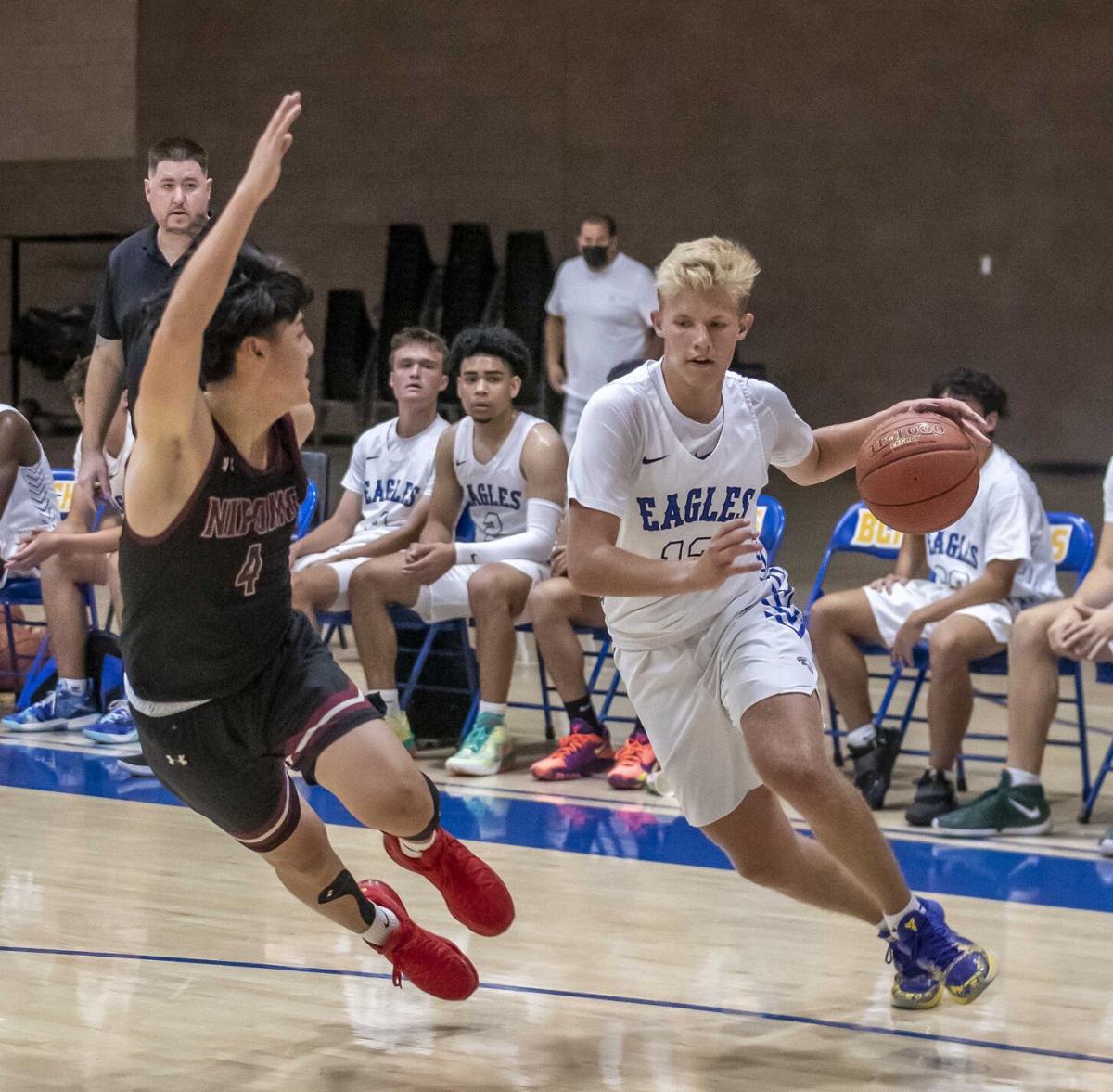 BCHS players celebrate after their win over Nipomo in the Division III sectional championships Friday at Bakersfield Christian High. The Eagles will host Valley Christian in the first round of the Division 3-AA Boys Basketball Championships Tuesday.

BCHS's Jackson Tucker, left, is fouled by Nipomo's Louis DiModica in the second half of the division III sectional championships Friday at Bakersfield Christian High.

BCHS's Seth Marantos (3) drives to the basket as Nipomo's Nate Reese (12) and Lucca Hart defend in the second half of the division III sectional championships Friday at Bakersfield Christian High.

The 2021 version of the Bakersfield Christian boys basketball team can never be accused of taking the easy route.

In a season that included 17 road games, many of which were more than a hundred miles away, the Eagles' run to repeat as Central Section champions has been no different.

Suffice to say, there was plenty of drama. For the second straight game, the top-seeded Eagles built a comfortable lead, lost most if not all of it, then made several key plays down the stretch to hold on.

On Friday night, top-seeded Bakersfield Christian followed up a clutch free throw with a defensive stop in the final seconds and held on for a 56-55 victory over No. 3 Nipomo to capture their second straight Central Section Division III championship.

“This feels amazing,” Bakersfield Christian coach Garrett Brown said. “I can’t even put it into words how good this feels. Just everything this team has gone through the past 14 months. To be able to host a Valley championship game, in our own building, and to be able to get it done with all the adversity that we faced. I couldn’t be happier for these kids. I couldn’t be happier for my coaching staff. And we ain't done yet.”

BCHS (19-11), the defending SoCal Regional Division IV champions who were denied a chance for a state final appearance due to the COVID-19 pandemic, will find out Sunday who and where they play next when this year’s regional pairings are announced.

“It’s unbelievable to be able to win one at home,” said Bakersfield Christian senior point guard Seth Marantos, who had a game-high 19 points. “Not everybody gets to do that. It’s the first time we’ve been able to celebrate in front of our friends and family. They gave us all the energy and helped us get over that hump, and we were able to get it done.”

In Friday’s matchup with the Titans (13-4), the outcome wasn’t decided until the final 24 seconds.

With the game tied 55-55, and Nipomo working for the last shot with less than 20 seconds to play, Bakersfield Christian junior Jackson Tucker stole the ball, raced down court and found teammate Erick Chaney cutting to the basket. Chaney was fouled with nine seconds to play and made one of two free throws.

After rebounding the miss, the Titans moved the ball to half court and called timeout with five seconds to play. Following a near steal by Marantos, Nipomo’s Daren Sosa took the ball out on the sideline and found Louis DiModica just below the elbow. The junior center made a spin move and appeared to break clear for a layup from the right side. But his off-balanced shot caromed off the backboard as time expired, and the Eagles bench stormed the court in celebration.

“Jackson made a great play to get back into the play and contest,” Brown said. “And then we got the rebound and here we are.”

Leading 32-25 at the half, Bakersfield Christian opened the third quarter with 10 straight points. Zach Hiebert had a pair of 3-pointers during the spurt to give his team its largest lead of the game, 42-25, with 5:05 left in the period. Hiebert finished with 11 points, including three 3-pointers.

But Nipomo, which had been cold from long-range in the first half, began to heat up. Rudy Garibay made three 3-pointers and the Titans scored 16 straight points to trim the Eagles’ lead to one point, 42-41 with under a minute left in the third quarter.

Garibay nailed another 3 to start the fourth quarter to tie the game at 44-44, but freshman Bentley Waller followed with a long-range shot of his own — setting up the fantastic finish.

“Give credit to them,” Brown said. “Those guys didn’t quit. They’ve got some guys that can make shots and make plays. Once we started attacking the rim, they really wanted to keep the paint congested. We got some really good looks, we just didn’t make them in the second half.

“In a game like this, in a packed house for the first time all year, playing for a Valley championship, sometimes the shots aren’t going to fall and you have to make up for it on defense. So obviously holding them to 55 (points) was the key to our success.”

Marantos did most of his damage in the first half, scoring 16 including eight straight to close out the first half as BCHS built a seven-point lead. Chaney had nine in the first quarter finished with 14, sinking 5 of 6 free throws in the fourth quarter.

“It was just our togetherness,” Marantos said. “We knew they were going to make a run. I mean, it’s basketball. They were there to make one late, but we were able to shut it down, play some defense together and got it done.”

The Eagles looked to slow down Nipomo’s leading scorer, entrusting Marantos and senior Jayden Huggins to defend him most of the night, denying him the ball whenever possible. After scoring five early points, Sosa was held to just three points in the next 16 minutes before heating up in the fourth quarter. He finished with a team-high 15. Nate Reese and Garibay finished with 12 apiece and DiModica added eight.

“There’s a lot of blood, sweat and tears that we put into this gym,” Brown said. “And it’s great because early on in the season we couldn’t guard anybody, and we just won a Valley championship with a defensive stop. So, it’s pretty big.”