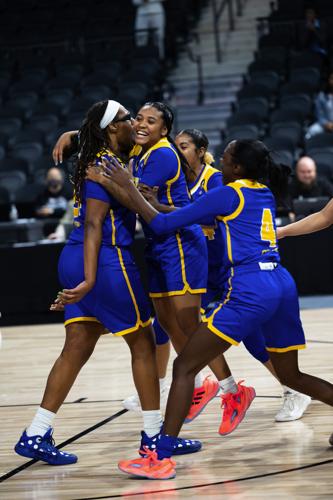 CSUB's Vanessa Austin, left, celebrates with her team after hitting the game-winner against CSUN in a first round game of the Big West women's basketball tournament on Tuesday in Henderson, Nev. 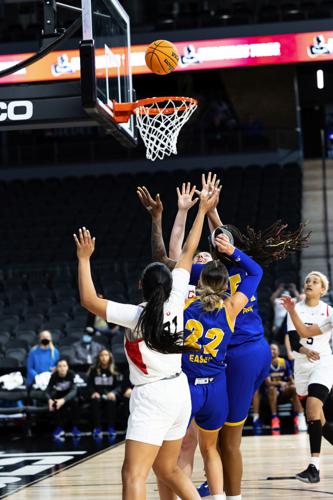 To secure an offensive rebound on CSUB's game-winning basket, Vanessa Austin, right, reached over CSUN's Tess Amundsen and Anaiyah Tu'ua, as well as her teammate Andie Easley in a first round game of the Big West women's basketball tournament on Tuesday in Henderson, Nev. 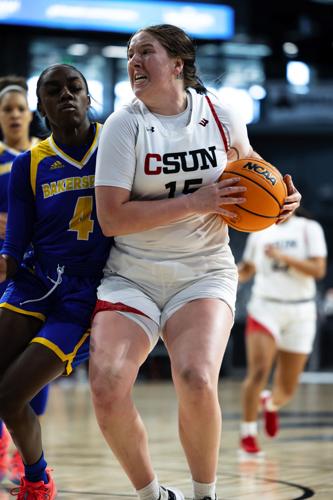 CSUB's Vanessa Austin, left, celebrates with her team after hitting the game-winner against CSUN in a first round game of the Big West women's basketball tournament on Tuesday in Henderson, Nev.

To secure an offensive rebound on CSUB's game-winning basket, Vanessa Austin, right, reached over CSUN's Tess Amundsen and Anaiyah Tu'ua, as well as her teammate Andie Easley in a first round game of the Big West women's basketball tournament on Tuesday in Henderson, Nev.

HENDERSON, Nev. — With the game on the line, as she snagged an offensive rebound from a jumble of hands with two seconds left in overtime, Vanessa Austin must have had a moment of déjà vu.

Cal State Bakersfield had previously traveled to the Matadome to face CSUN on Feb. 12 and left heartbroken. On that occasion, Jordyn Jackson hit a pair of free throws for the Matadors, Jayden Eggleston missed a shot up close, and Austin couldn't connect on a putback that fell just short.

This time, Jordyn Jackson hit a pair of free throws, Lexus Green missed a shot up close, and Austin found herself in position for a game-winner.

The desperate shot bounced in with less than a second left, the culmination of a crucial run for Austin with 12 points in the fourth quarter and overtime, and the Roadrunners blanketed Tess Amundsen on the following possession to seal a 63-62 win and advance to the next round of the Big West Conference tournament.

Eggleston, playing just outside her hometown of Las Vegas, had 15 points in the first half to key a red-hot start for the Roadrunners. But the Matadors clawed their way back from a deficit that stretched as wide as 13 points and took their first lead at the start of the fourth quarter.

Eggleston finished with 29. Austin posted 16 points and 11 rebounds after spending much of the game in foul trouble.

“When I’m posting up, I really take my time so that, obviously, I don’t pick up another foul," Austin said. "I knew my team needed me, so I had no choice but to buckle down.”

CSUB coach Greg McCall said it required a change in strategy: "We told her, ‘Stop setting screens. Don’t move. Just stay where you are.’"

CSUN was led by Amundsen's 24 points. The junior from Fresno connected four times from deep in the second half. Jackson came alive late for a series of key baskets, including back-to-back 3-pointers in overtime and the go-ahead free throws, finishing with 19.

Practically everyone was shut down for CSUN early. Amundsen missed her first two attempts from long range, and Kayanna Spriggs and Jackson were called for early charging fouls that aided what became a 16-3 run for CSUB.

But in the second quarter, a couple of strong moves to the paint for Michelle Duchemin put CSUN down just 23-17. The Roadrunners entered the half with the same margin, at 27-21.

CSUN’s 3-point drought didn’t last. On their opening possession of the quarter, the Matadors got it to Amundsen, who connected immediately from deep. Later, the Roadrunners had a key mishap up 33-28 when Duchemin drew a charge on Austin to consign the center back to the bench with three fouls.

On the strength of another Amundsen 3-pointer, CSUN cut the lead to 35-33 entering the final quarter. Then she got a second immediately after the break to give the Matadors the lead.

Soon, Austin came back and turned the game into a post battle. First she put back a missed 3-pointer. Then she got an inbound and gave it right back to Tatyanna Clayburne for a 3-pointer that put CSUB up 43-39. Finally, she collided with Olivia Smith under the basket while going for a layup. The layup fell, and Smith was called for a foul. After a timeout, Austin added another basket to make it 47-39.

But the Matadors connected on three 3-pointers in the last five minutes, including a game-tying effort from the corner by Anaiyah Tu'ua with one minute left.

CSUN had a chance to win on a layup by Spriggs with 11 seconds left, but it went wide to send the game to overtime.

With CSUB up one point late in the extra period, Saxon, attempting to defend Jackson on a drive to the basket, was called for a foul. Jackson hit both free throws. That set up the Roadrunners for a final play with 15 seconds left.

The play was blanketed, and Green had to toss up a contested layup that hit the back rim. Austin snagged the ball over Amundsen and Tu'ua, banking it home for the win.

It went down as the Roadrunners' first win outside of the Icardo Center this year after a 4-19 regular season.

HENDERSON, Nev. — Whatever else happens for the men's team at the Big West Conference tournament, the Roadrunner basketball teams may find the…