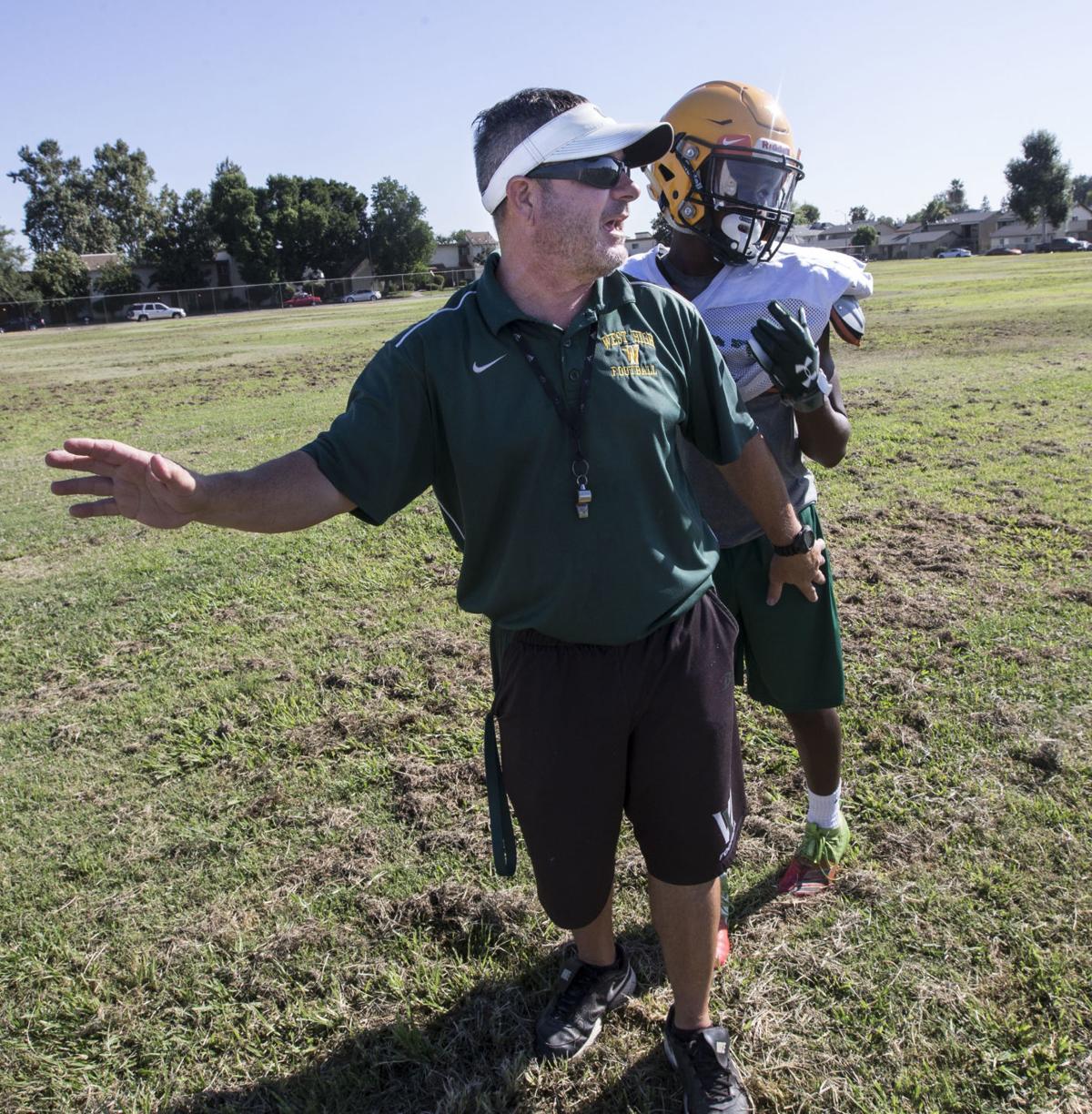 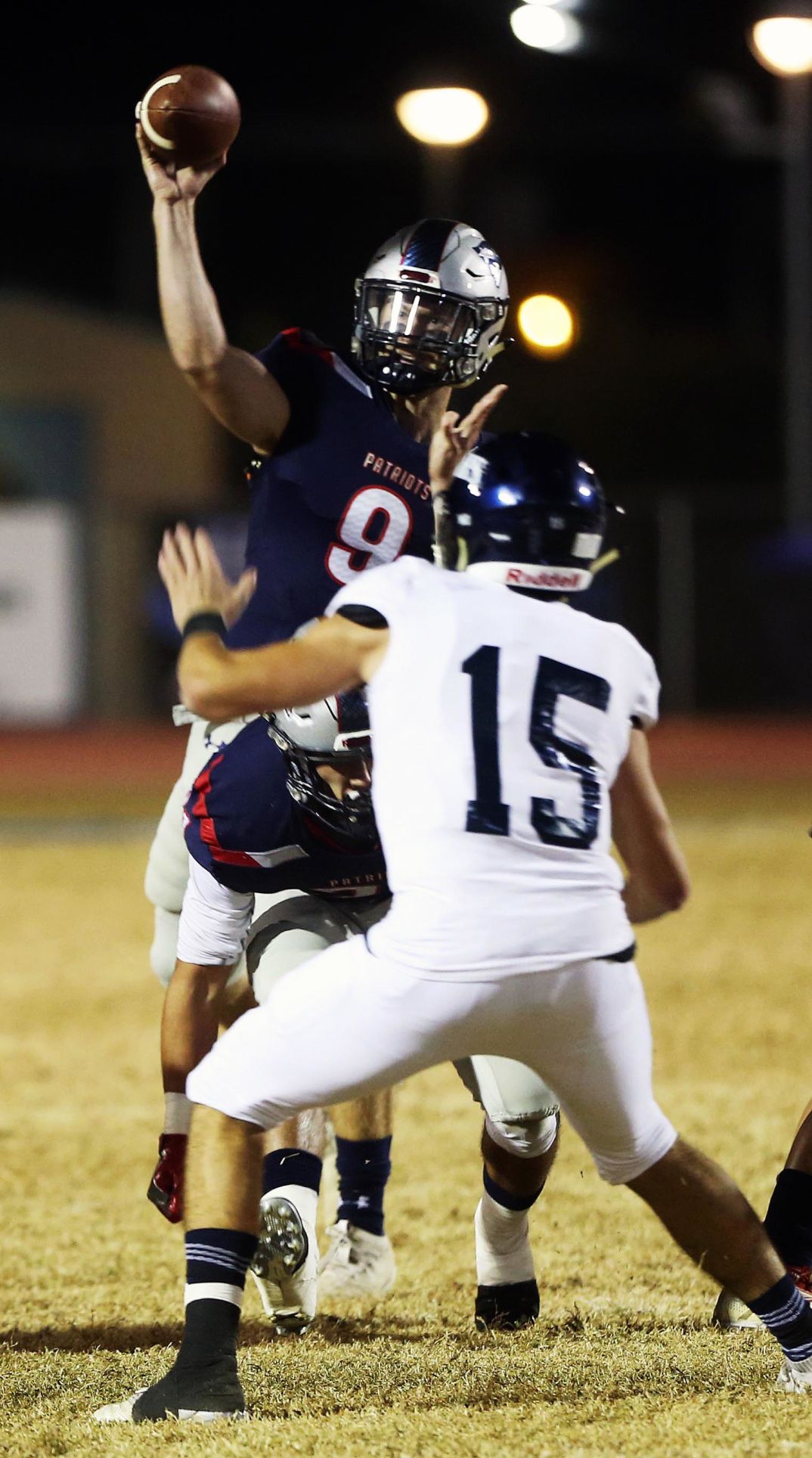 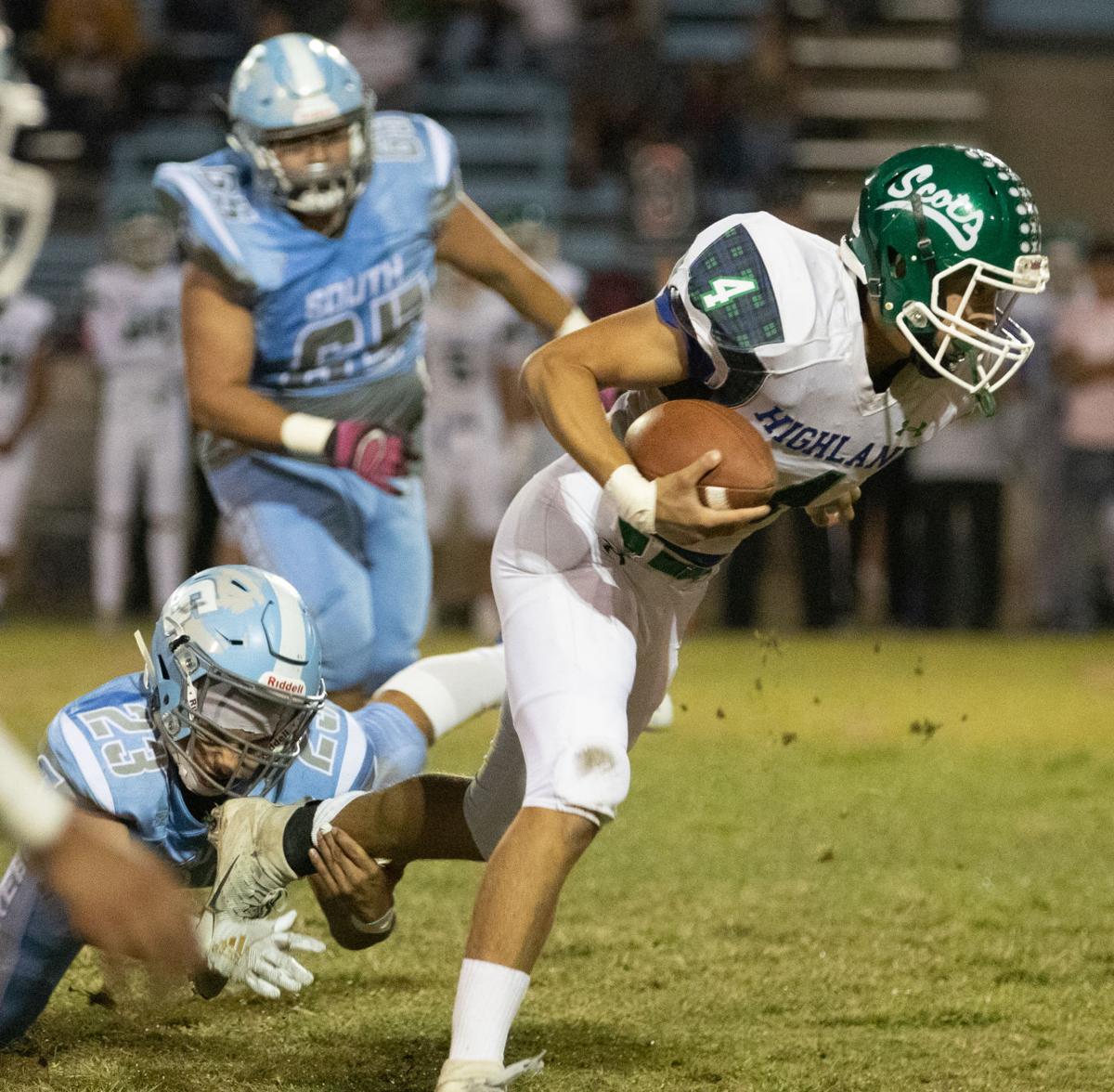 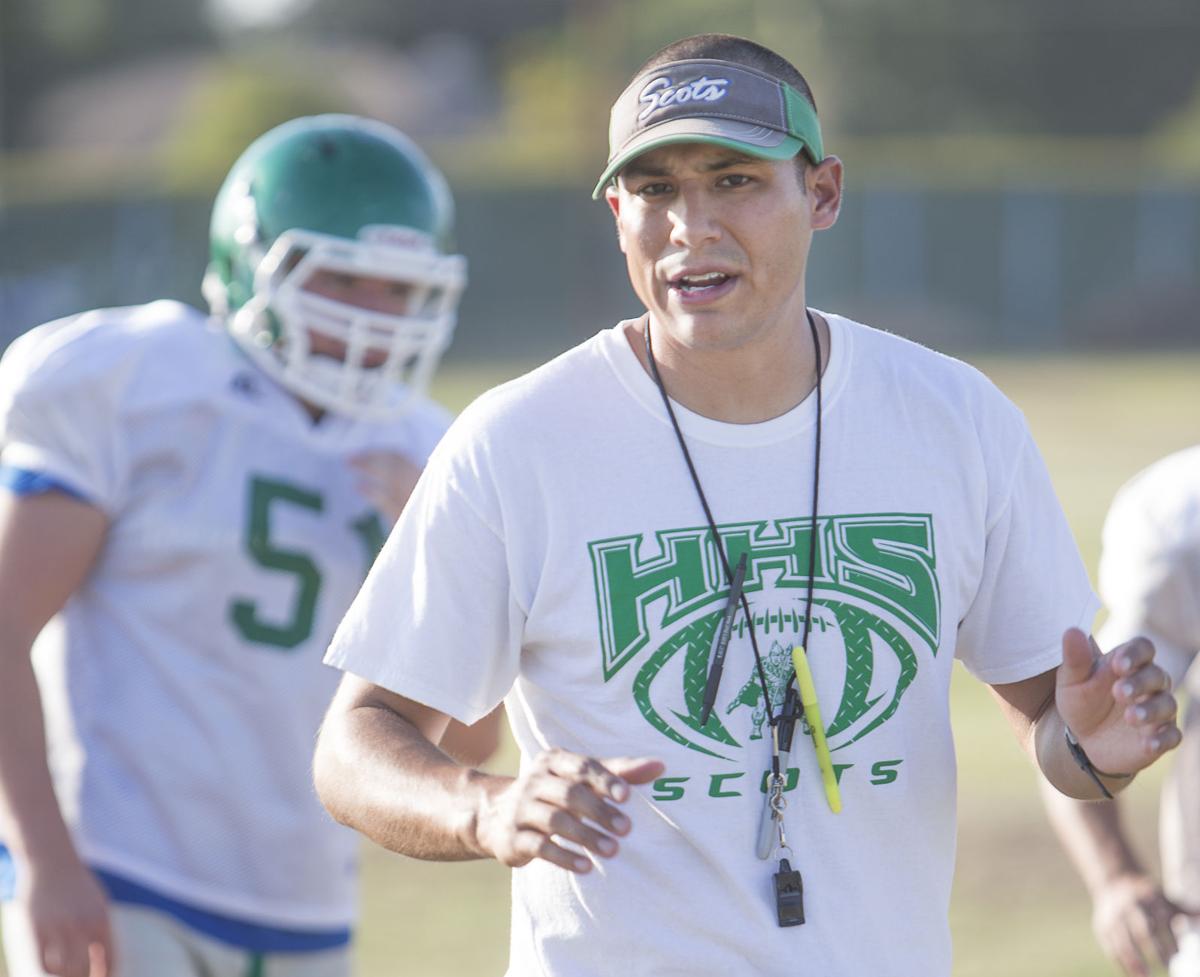 Highland football coach Michael Gutierrez signals for a break during practice in 2016. 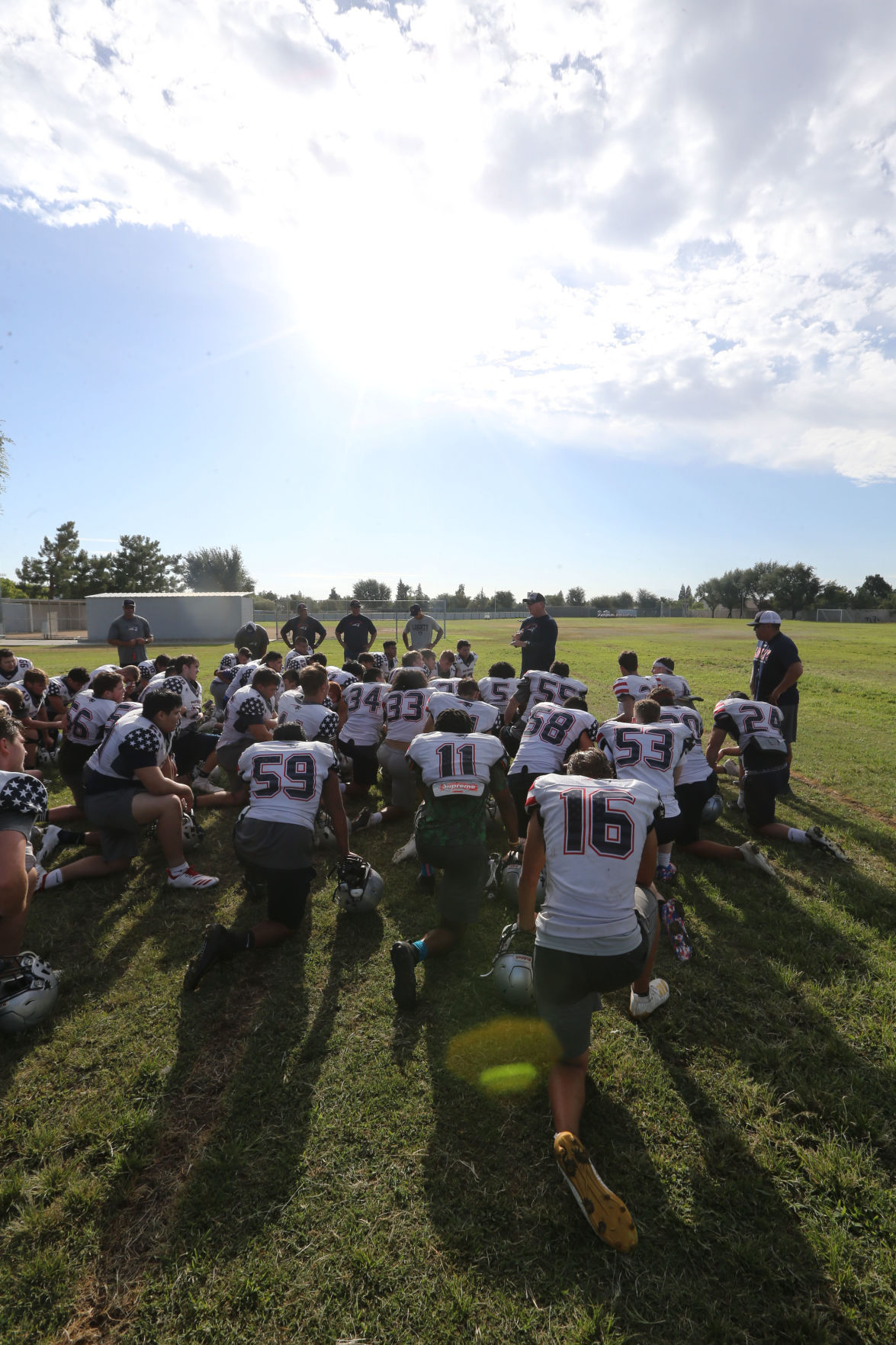 Highland football coach Michael Gutierrez signals for a break during practice in 2016.

What a difference a year makes.

On Nov. 8, 2019, several area football teams were putting the finishing touches on preparations for the first round of the Central Section football playoffs.

This week, local teams marked a different kind of transition. The majority of the Kern High School District football teams returned to their campuses for the first time in nearly eight months — when the COVID-19 pandemic forced school closures, the cancelation of the spring season and postponement of fall sports.

This week, there were no footballs or blocking equipment. No pads and helmets. They’ve been replaced by protective facial masks. Just a group of coaches and players, focusing on conditioning, all working together under strict safety guidelines. It’s the first step toward the ultimate goal of preparing for a suspended season scheduled to start on Jan. 8.

“It’s exciting to be able to see them in person, versus being online,” said West High coach Derrick Dunham. “Obviously looking at somebody’s eyes and seeing how they’re feeling and everything is so much different in person. So just really excited to see them all there and being able to get back to having a purpose.”

As part of that purpose, players have been divided into “cohorts,” each limited to a combination of 25 coaches and players. All are required to wear a mask and stay at least six feet apart.

“We’re following all the rules; social-distancing and wearing the mask,” Dunham said. “Even with all the safety precautions we have to follow, it’s just been an enjoyable experience this week. And as coaches we’re just excited to get out there and be able to run around a little bit, and enjoy this nice weather right now.”

Like many of his counterparts across the county, East High coach Kasey Tittlemier and his staff spent months preparing for this week’s return to the football field. According to guidelines outlined by the KHSD, they have divided up their roster among assistant coaches, leaving the more hands-on instruction to them while he surveys the entire group from afar. For Tittlemier, that meant retreating to the Blades pressbox where he utilized the PA system to relay instructions to his coaches and players.

Being somewhat secluded also helped Tittlemier fight off the urge to hug his players and give them a congratulatory fist-bump or high-five.

“It hard because I’m a big hands-on kind of guy,” Tittlemier said. “So it was tough trying to keep distance and honor all the rules in place. But it was great to see faces and communicate with them. And they were excited, as well. I’m just hoping we can be effective with everything with the guidelines and that way we can keep everything going forward.”

Although social-distancing guidelines were in place, Highland coach Michael Gutierrez is seeing an opportunity for his team to grow closer.

“Within the groups it's nice because I think you can really form those bonds, even though you’re six feet apart,” Gutierrez said. “It’s still your group. They’re really going to get to know each other, be able to challenge themselves, and I think for us as coaches, it allows us to have kids compete against each other in certain areas. For certain positions, they start seeing who their competition is. So it’s definitely different, but we’re doing our best to find the positives in it, and make the most of this. So long as things keep trending in the right way, when we are able to play, we’ll be ready.”

Liberty coach Bryan Nixon was also excited about interacting with his players, but is trying not to look too far ahead.

“We’ve actually just said let's take the day for the day,” Nixon said. “We have the blessing of being out here and let's make the most of it today, and we’ll deal with tomorrow, tomorrow. And our kids have been very receptive to that, very excited and enthusiastic … we can only control what we can control.”

Shafter coach Jerald Pierucci has also tried to keep things in perspective. Although he was happy to see his players in action, he also understands that it has been difficult for his players on an emotional level.

“There’s just something about being face-to-face, or as close as we can get to being face-to-face communication and interaction,” Pierucci said. “I think for coaches, especially, because we put in so much more time into our kids than the average teacher does. For us it’s those personal relationships that really make our jobs special. And we haven’t been able to really do that. Because there’s nothing personal to me about a Zoom meeting.

“Seeing them in person just adds so much more to our relationships with our kids. It’s just been really nice to have them out doing stuff that I think is going to give them a reason for waking up in the morning and getting stuff done. I think that’s the thing our kids have been missing.”

Last March was right in the middle of the season when many high school students show off what they've been practicing all year. Marching bands…