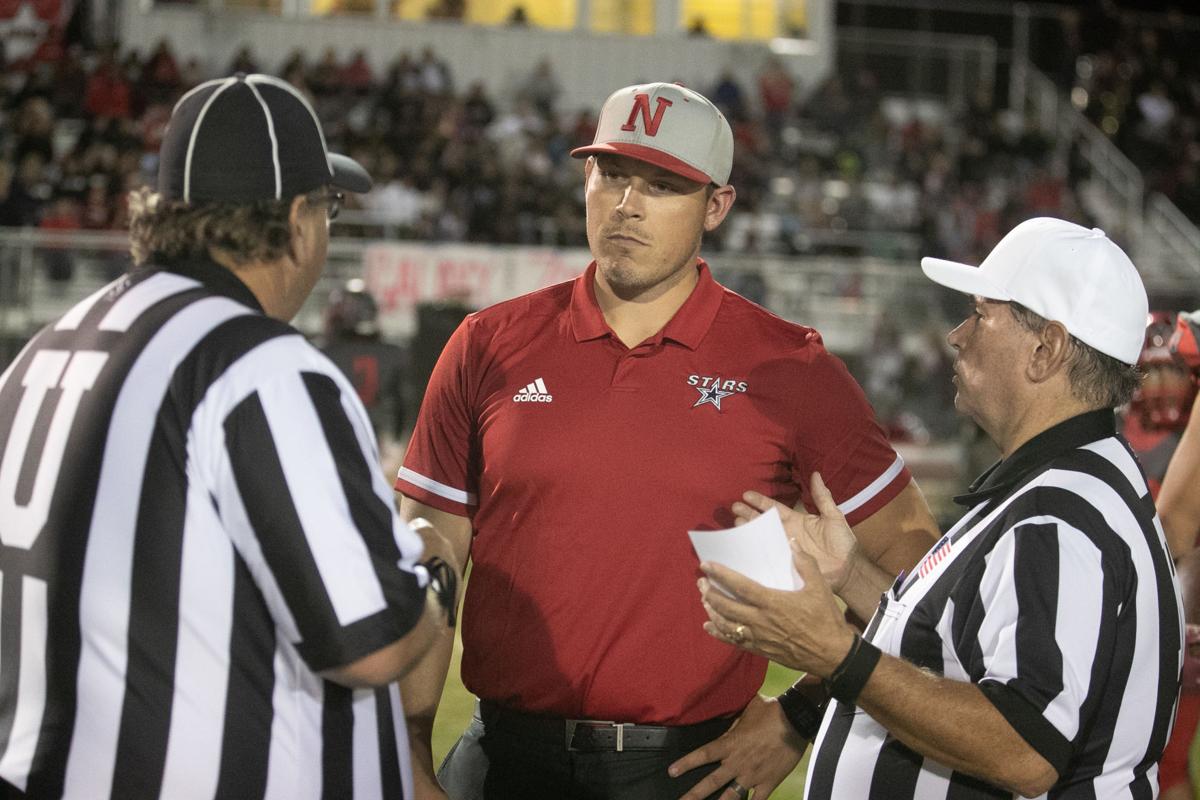 North High's head coach Richie Bolin talks to refs during a game in 2019. 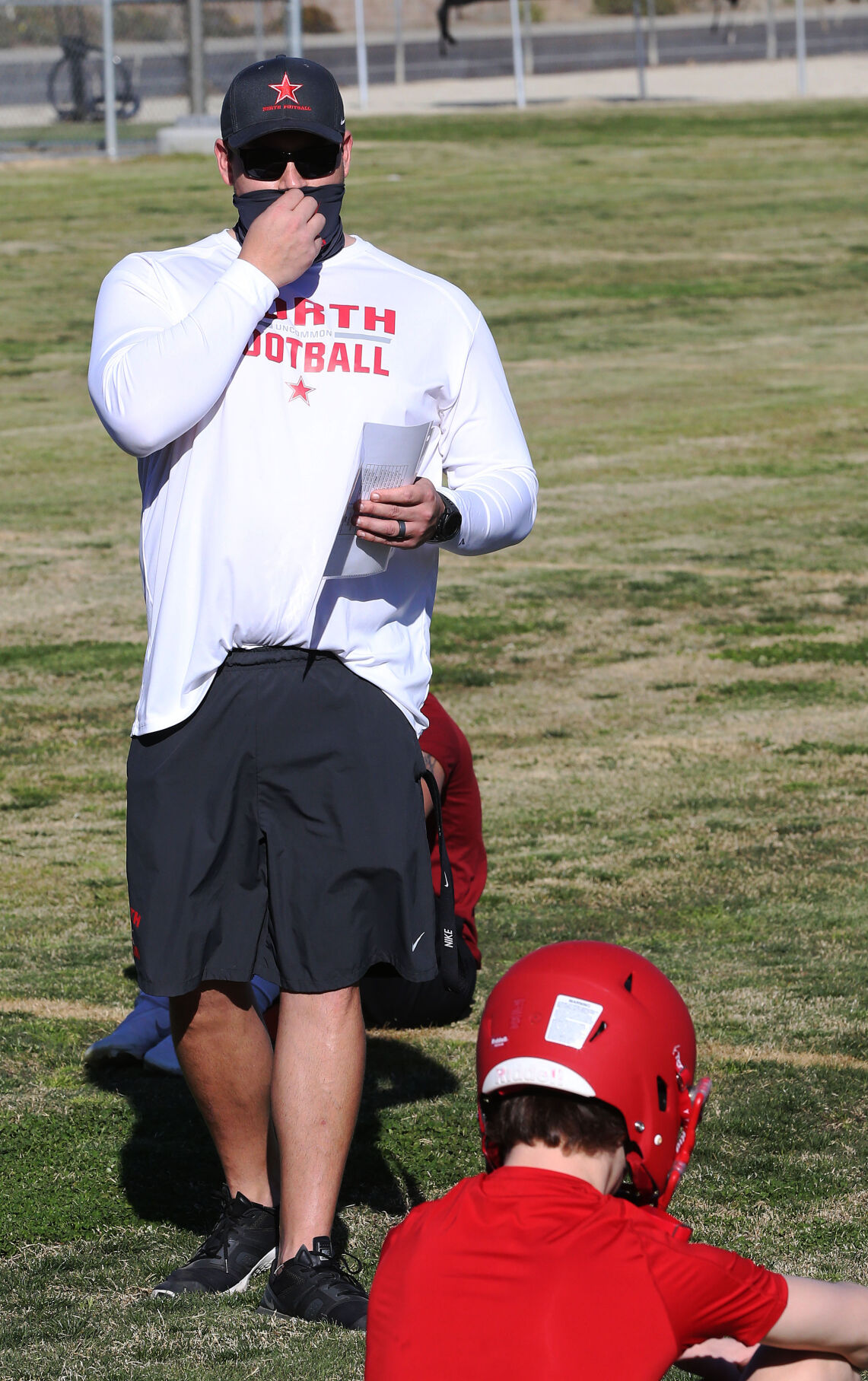 Head football coach Richie Bolin addresses his players during the first day of practice prior to the spring season at North High.

North High's head coach Richie Bolin talks to refs during a game in 2019.

Head football coach Richie Bolin addresses his players during the first day of practice prior to the spring season at North High.

Richie Bolin is no stranger to putting out fires, literally and figuratively.

The third-year North High football coach worked as a wildland firefighter for two years after the former Stars standout lineman finished his playing career at New Mexico State, and has also become adept at overcoming life’s challenges when they flare up.

On Friday, the two worlds collided somewhat when poor air quality due to smoke from a pair of raging fires forced the cancellation of the Stars’ home game against Frontier, the teams’ final scheduled preseason contest before league play starts next week.

“I thrive in chaos,” said Bolin, who worked for the Kern County Fire Department based out of Tehachapi prior to his current tenure as a physical education teacher and coach at North. “Growing up in the community I did, and the situation I did, and then dealing with everything we’ve had thrown at us ever since I took over in October of (the 2019) season. It’s been curveball after curveball.

“We have to adapt and overcome. We tell our kids every play what’s the most important one? The next one. Know what you did wrong, learn from it, but move on. We have to move to the next play. So I hate pouting or crying or whining. … Hey, it is what it is. Let’s go. That mentality has been the same with me.”

The cancellation is the latest in what has been a bumpy ride for Bolin since taking over midseason as interim coach at North in 2019 after Norm Brown left the program. Early on, Bolin made the transition look easy, with his team winning its first four games, including a first-round playoff victory.

He was hired as the school’s permanent coach shortly thereafter, but the obstacles continued. The COVID-19 pandemic wiped out all football-related activities for nearly a year, followed by a makeshift, abbreviated spring schedule that was completed just five months ago. Then, following a season-opening loss to Porterville, North missed two weeks for health and safety protocols following a positive COVID-19 test.

“I just roll with the punches,” Bolin said. “Our coaches and kids, we’re pretty used to overcoming obstacles. I don’t really look at the possibility of obstacles much. I didn’t anticipate the air quality, the fires … but most people who know me, my players, know I’m not a complainer. I deal in reality and the current moment, so this is what we’re faced with.”

The latest cancellation, implemented by the Kern High School District, was one of several on the day caused when wind flowing from the northeast pushed smoke primarily from the Windy Fire in Tulare County toward Bakersfield. The fire has burned 58,802 acres and was only 5 percent contained as of Friday. The KNP Complex Fire in Sequoia National Park is also contributing to the smoky atmosphere.

“I took over and there was no time to reflect or worry,” Bolin said. “You gotta coach, you gotta play. COVID … the same thing. There’s no point in crying or getting on social media and complaining about this and that. We face reality, move on. So right now, we lose this game because of air quality. … Move on, get ready for Highland next week.”

Bolin’s views were echoed by other area coaches affected by the cancellations.

Foothill coach Brandon Deckard, whose team took a game with Bakersfield High with less than 48 hours' notice, was looking forward to playing against the Drillers on Friday night. But the cancellation was the culmination of an up-and-down week for the fourth-year coach.

“I tell you what, this has just been a rollercoaster ride,” Deckard said. “It’s just hard. It’s just a disappointment (for the kids). It was going to be a big stage and it was going to be exciting on Friday night with alumni there and everything having to do with that game. … We were all looking forward to it, but then it just kind of goes away. It’s nobody’s fault, it’s just kind of how this season’s working.”

For interim Drillers coach Rashaan Shehee, the meeting was supposed to be his first as a head coach, and his team’s first game in three weeks due to health and safety protocols — and against his alma mater.

“Obviously, we’re extremely disappointed, both from the coaches standpoint, administration standpoint, on both sides,” Shehee said. “Those coaches put in time, those players put in time and were looking forward to the game. So we’re disappointed, but at the same time both of us have to put our focus on moving forward. So we can’t dwell on this. Dwelling on it isn’t going to do anything, so we have to look forward and start preparing for the following week.”

Using the cancellation as a teaching moment is something the coaches all felt was important.

“It’s disappointing, it really is, to both schools and everybody, but we’re going to take it on the chin and tell the kids, ‘Hey man, let’s concentrate on what we can control,’” said Deckard, who scheduled his team’s picture day for Friday after the cancellation was finalized. “We can’t control scheduling, we can’t control cancellations, but we can control our effort day in and day out, and that’s all we can do.”

“Things like this happen in life and that’s all we can tell our kids,” said Shehee, whose team will play at Centennial at 1:30 p.m. Oct. 2 in the Southwest Yosemite League opener. “Things aren’t going to go our way in life, and sometimes you just have to say, ‘Hey, figure it out and move forward.’ And now we have to get ready for the next one.”

West High’s homecoming game against South High was also put on hold because of the air quality, something that has become all too familiar for coach Derrick Dunham.

The Vikings’ Week 2 game at North was canceled due to health and safety protocols, and the school was able to find a replacement game against Atascadero with just two days' notice. But Friday’s situation was simply too difficult to overcome.

“In 25 years at West, I’ve seen almost everything,” said Dunham, who has rescheduled the homecoming for Oct. 15 against Ridgeview. “But I was telling someone today, you’re basically preparing for three opponents a week. The team you’re going to play, COVID and the weather.”

But Dunham has remained positive and says it's important to keep things in perspective.

“There are things that are out of your control, and that’s just the way it is in life and you have to learn to handle adversity,” Durham said. “But foremost, above everything else, our thoughts and prayers go out to all the folks that are fighting these fires, and the people being affected by the fires getting close to their homes, thousand-year-old trees that could possibly burn down. When you think about that, high school football is really a small deal.”