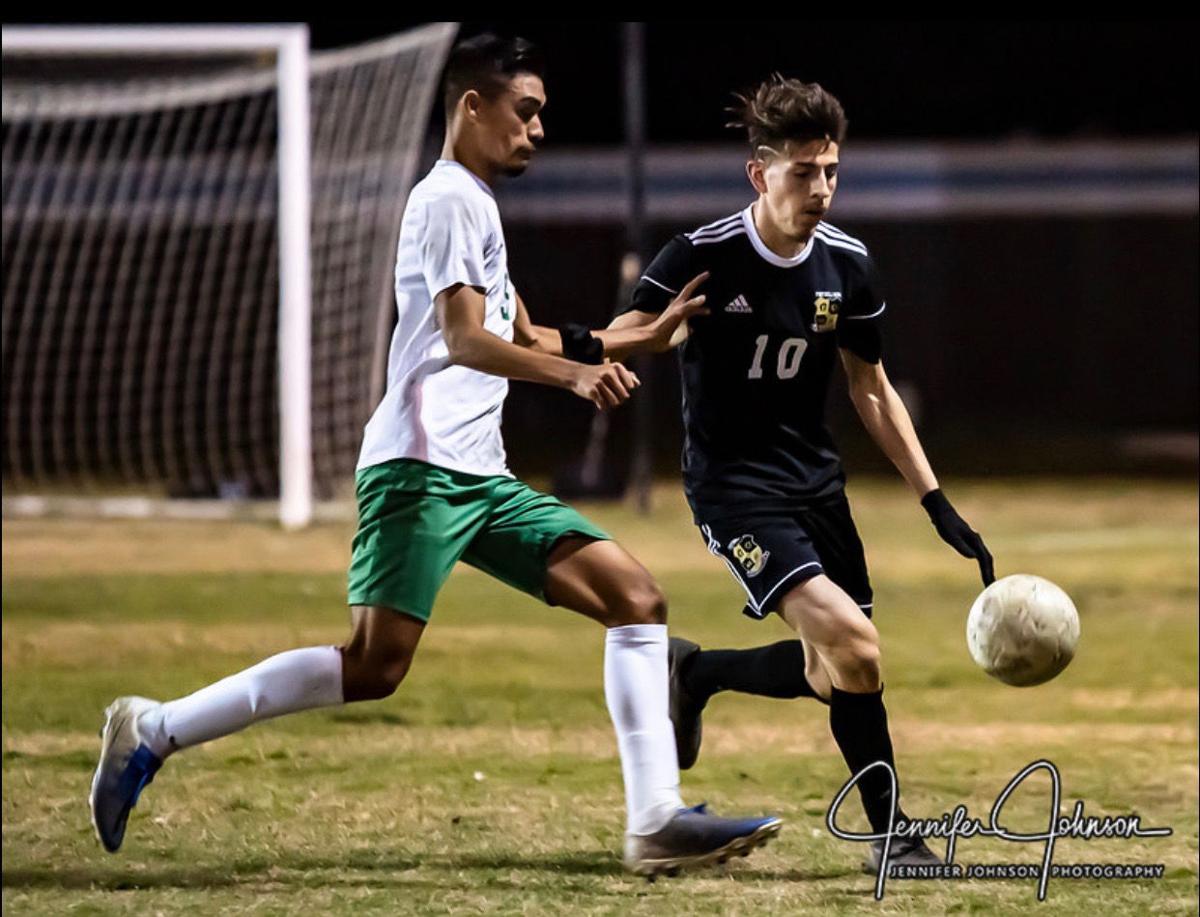 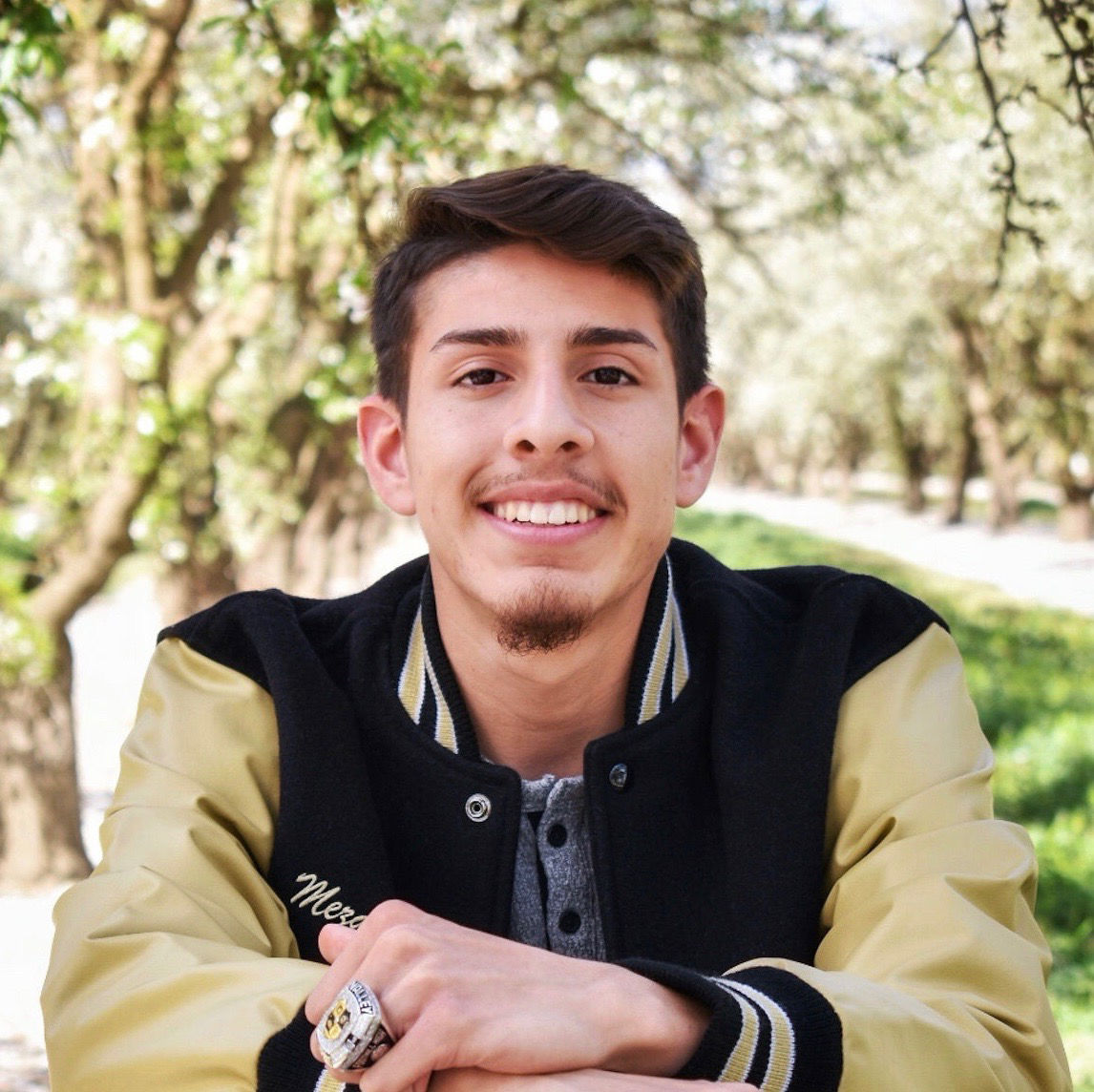 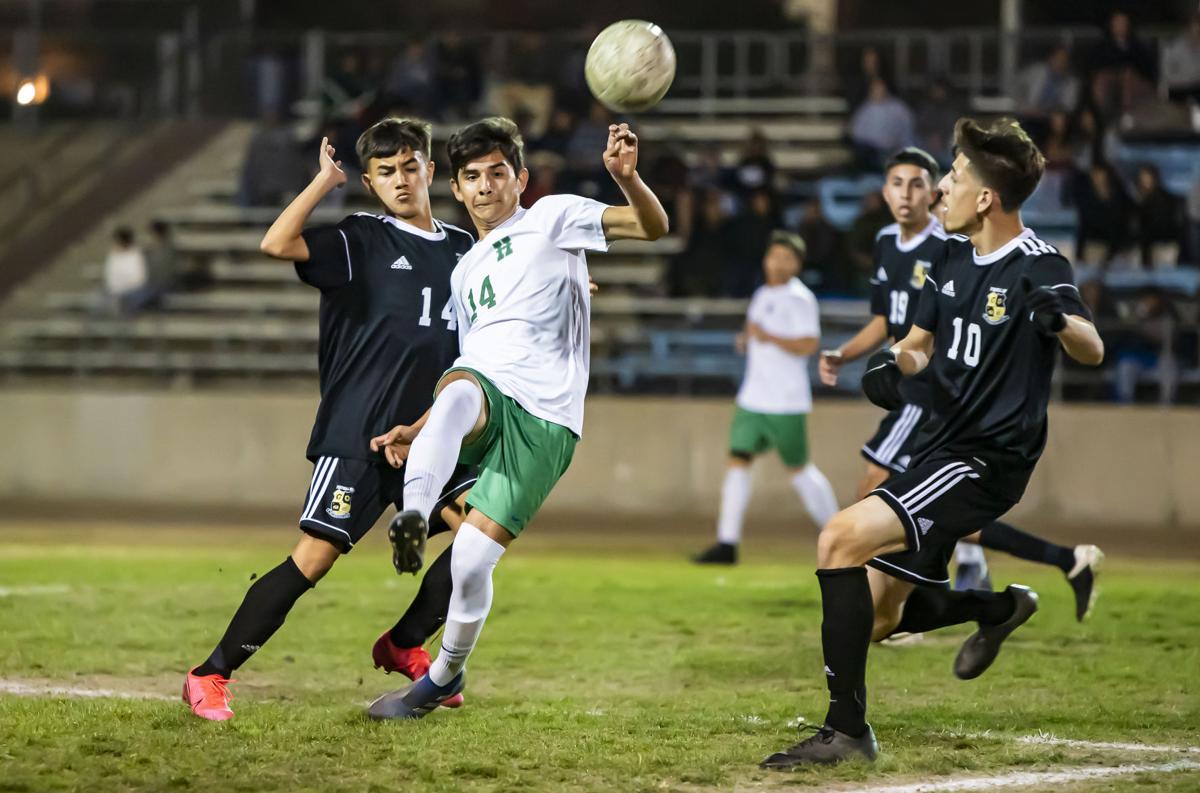 Diego Rodriguez (14) of Highland and Aron Favela (14) and Andres Meza (10) of Foothill collide while trying to possess the ball during the Central Section Division 3 Championship on Friday.

Diego Rodriguez (14) of Highland and Aron Favela (14) and Andres Meza (10) of Foothill collide while trying to possess the ball during the Central Section Division 3 Championship on Friday.

Talk about saving your best for last.

The Trojans senior finished the year with 22 goals and nine assists for a team that lost just one game and was a combined 46-3-7 the past two seasons.

And for all that, Meza joins Garces’ Alex Halevy as the 2019-20 BVarsity All-Area boys soccer co-player of the year.

“He has an extra degree of creativity that you don’t see a lot,” said Foothill coach Ty Rose of Meza. “You know I get a lot of good players and I’m coaching, ‘do this’ and ‘don’t do that.’ And with him, sometimes you just have to let him go, do his thing, and create those little bits of magic that a normal player just can’t do.

“You don’t get to coach very many kids like that in a career. Even in practice, he’d come up with some crazy pass or he’d see something and thread the needle or hit a shot that you weren’t expecting. It’s pretty fun to coach a kid like that.”

The co-offensive player of the year in the Southeast Yosemite League, Meza took his game to a new level in the postseason.

His pass led to teammate Shia Clayton’s go-ahead goal in a 2-1 victory over Fresno-Washington union in the first round of the Central Section Division 3 playoffs. He then scored three goals in a 4-2 victory over Fresno-Roosevelt before scoring two in wins over East and Highland.

Against the Blades, Meza brought the crowd to its feet with a scoring blast from 40 yards out.

“It’s probably the best goal that I’ve ever seen,” Rose said. “He had a crazy stretch where he was doing it all for us. Not a lot of players can take a team and put them on their shoulders like that. It was pretty cool to see that and for him to do that.”

Meza made key contributions on last year’s Division 4 championship team, but he credits an increased work ethic for helping him elevate his game this season.

“I think coming in from last year my mindset changed,” Meza said. “I think that this year I totally changed the mentality that I had and kept putting in all that work, putting in work everyday and I couldn’t stop. I couldn’t stop the grind and I worked super, super hard for it.

“A lot of our leaders left last year and I really think that all of us that were juniors last year had to fill in a big spot,” Meza said. “We had to set up up and be the best leaders that we possibly could. And it was just great. Last year we were a little bit dependent on other people and some seniors that left, so this year I just felt the need to not change my role necessarily, but change the way I played, and tried to help the team out as much as I could.”

Despite his success, Meza doesn’t have many options lined up to play in college next year. He says he’s been invited to play at Bakersfield College or Fresno City College, but his hopes of playing for hometown Cal State Bakersfield have yet to materialize.

“I’m trying to focus more on college,” said Meza, a 4.0 student who plans to major in electrical engineering. “but I’m keeping that road open for soccer, and I’m just going to see how far I can go with it.”

Growth can come in a variety of different shapes and sizes as Garces junior Alex Halevy discovered this past year.