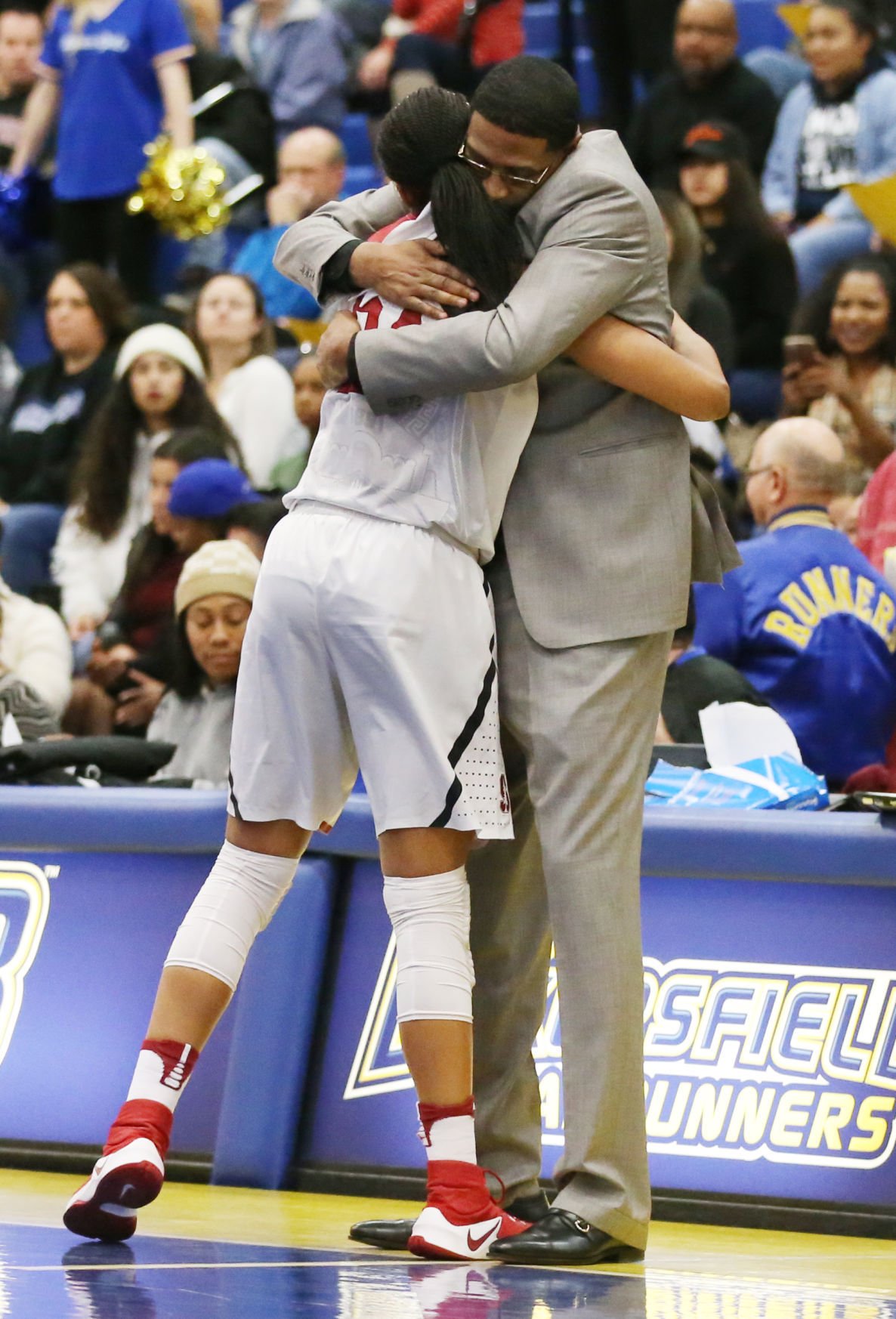 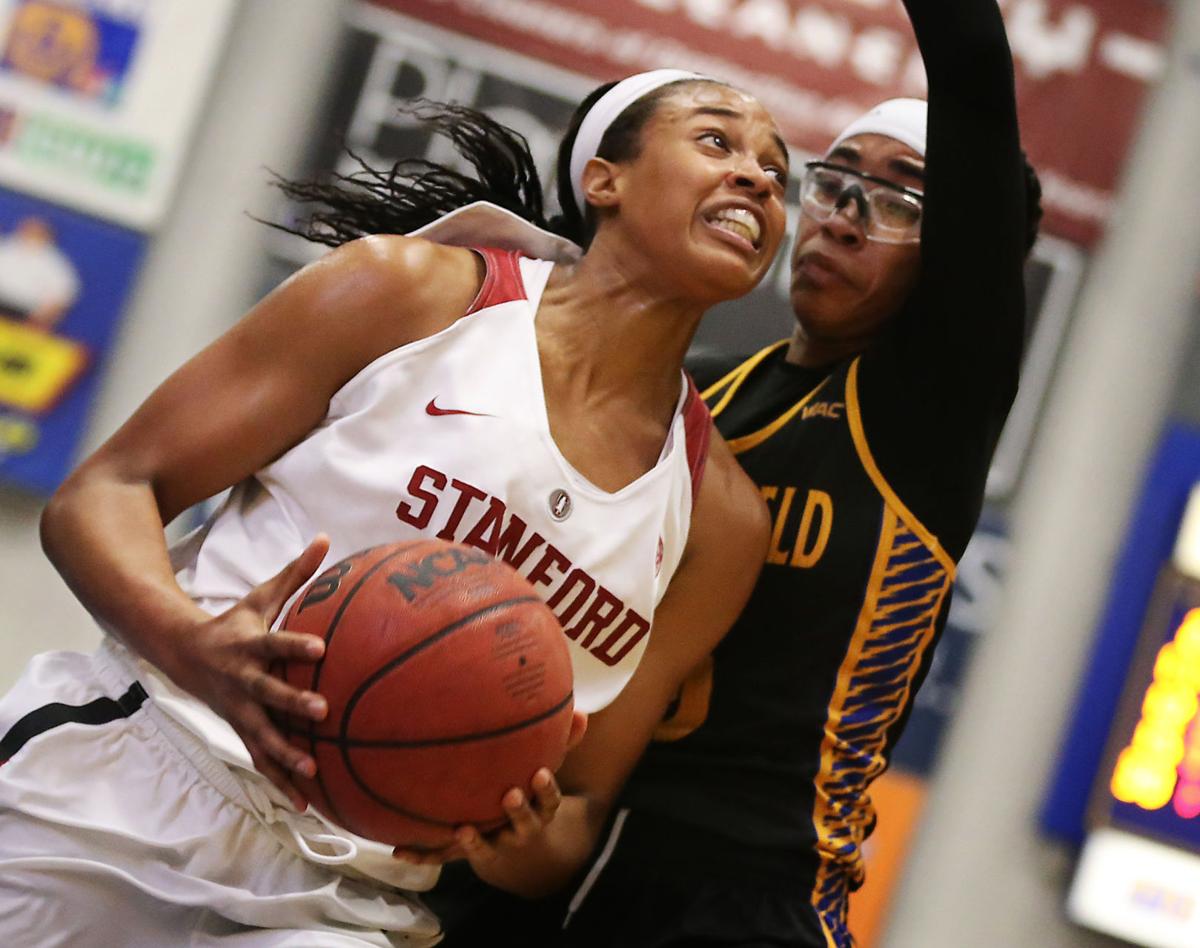 Stanford’s Erika McCall drives past CSUB’s Erika Williams in the first quarter at the Icardo Center. McCall is a Ridgeview High graduate and was playing against her father, Greg, who is the head coach of CSUB.

Stanford’s Erika McCall drives past CSUB’s Erika Williams in the first quarter at the Icardo Center. McCall is a Ridgeview High graduate and was playing against her father, Greg, who is the head coach of CSUB.

It wasn’t until Cal State Bakersfield’s game against Stanford was finally over that Greg McCall could return to the role of proud father.

During the contest, the CSUB coach was focused solely on trying to slow down his daughter Erica, Stanford’s standout senior center, and beating the 11th-ranked Cardinal.

Things didn’t turn out they way Dad would have liked: Erica, playing in front of a plethora of friends and family members, scored a game-high 18 points and grabbed 12 rebounds to lead Stanford to a 77-56 win in front of a record crowd for a women’s basketball game of 1,688 at the Icardo Center.

“This is something I’ve dreamed about for a long time,” Erica McCall said. “I was really excited to see the numbers that came out to watch me play. ... I’m excited that we got the win. I think my team played well. To be able to come out with the win in my hometown is pretty amazing.”

Afterward, father and daughter embraced and later were joined in the post-game press conference by two of Greg’s other children: DeWana Bonner, a member of the WNBA’s Phoenix Mercury, and Justin McCall, a Ridgeview senior who recently signed to play basketball at CSUB.

“I’m feeling just overwhelming joy inside right now,” Greg McCall said. “I’m disappointed because we lost, but I’m just happy that be able to have no one injured and to have all my family here. This is a huge moment for me.”

Erica McCall put on an excellent performance, showcasing her vast array of skills.

McCall’s shooting, passing, dribbling and defensive prowess combined with the efforts of her teammates were ultimately too much for CSUB to handle.

“This game right here wasn’t about her doing her well against me,” Greg McCall said. “It was about us stopping her and not allowing her to do good things on the floor. We knew it was going to be a tough task. I’m proud of her to see the things that she’s done that we’ve worked on over the years. It’s continuing to pay off.”

The game was close for more than a quarter. The two teams swapped the lead nine times during the first quarter.

CSUB (1-5) led 20-17 with a minute remaining in the first quarter. But McCall tied things right before the end of the period with a put-back of a teammate’s missed free throw.

After that, Stanford (7-1) started using its size advantage to score easy baskets inside and steadily began pulling away.

The Cardinal out-scored the ‘Runners 20-6 in the second quarter and led 40-26 at halftime on the strength of 26 points in the paint.

CSUB played well except for the second quarter, when it turned the ball over six of the first nine times it had the ball.

The Runners finished with just 13 turnovers, four fewer than Stanford.

Brittany Sims had a stellar game for CSUB, scoring 15 points on 7-of-9 shooting from the field.

“I thought there were a lot of times when we did some really, really good things,” Greg McCall said.

“I saw a lot of bright spots with our team. I though we hung with them pretty tough, especially with the first quarter being tied. The second quarter is when we made our mistakes.”

Erica McCall admitted to being nervous before the game.

“For me this was a super-big game,” she said. “... I had some butterflies, but the trip (earlier Thursday to Ridgeview High School) relaxed me a lot ... I just had to go out there and have fun, and that’s what I did.”

McCall came into the night averaging 17.1 points, 7.4 rebounds and 2.3 blocks per game. She leads Stanford in all three categories.

“We love Erica,” Stanford coach Tara VanDerveer said. “She’s just had such a fabulous career at Stanford. She is an absolute joy to coach. I think she learned that from her family. She’s just a wonderful person and a great basketball player. I enjoy every single day in practice with her and every single game.”

CSUB’s next game is at 2 p.m. Sunday against the University of Pacific in Stockton.