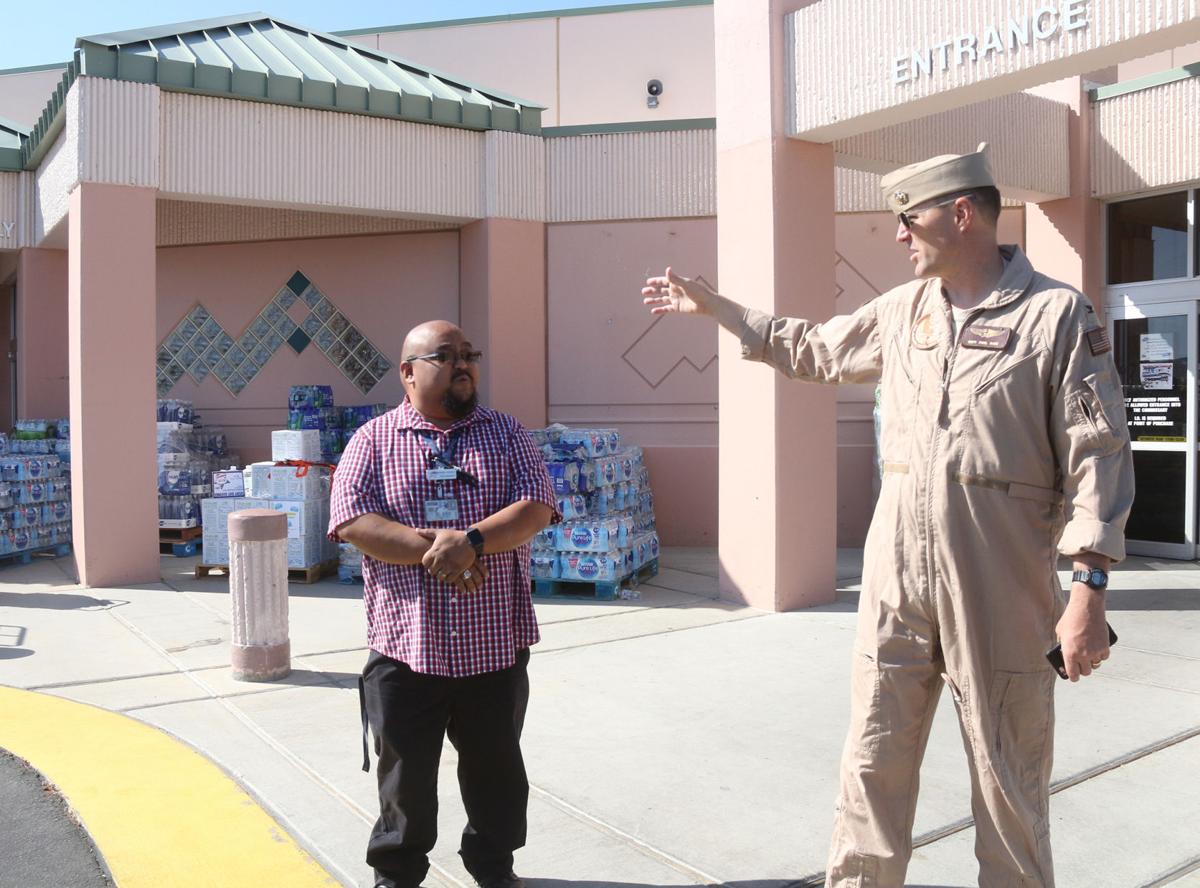 Capt. Paul Dale, commanding officer of NAWS China Lake, and China Lake Commissary manager Phillipe Gonzaga speak with press during a tour on Tuesday. The commissary, the base’s grocery store, sustained damage during the 7.1 earthquake, including to its refrigeration area. 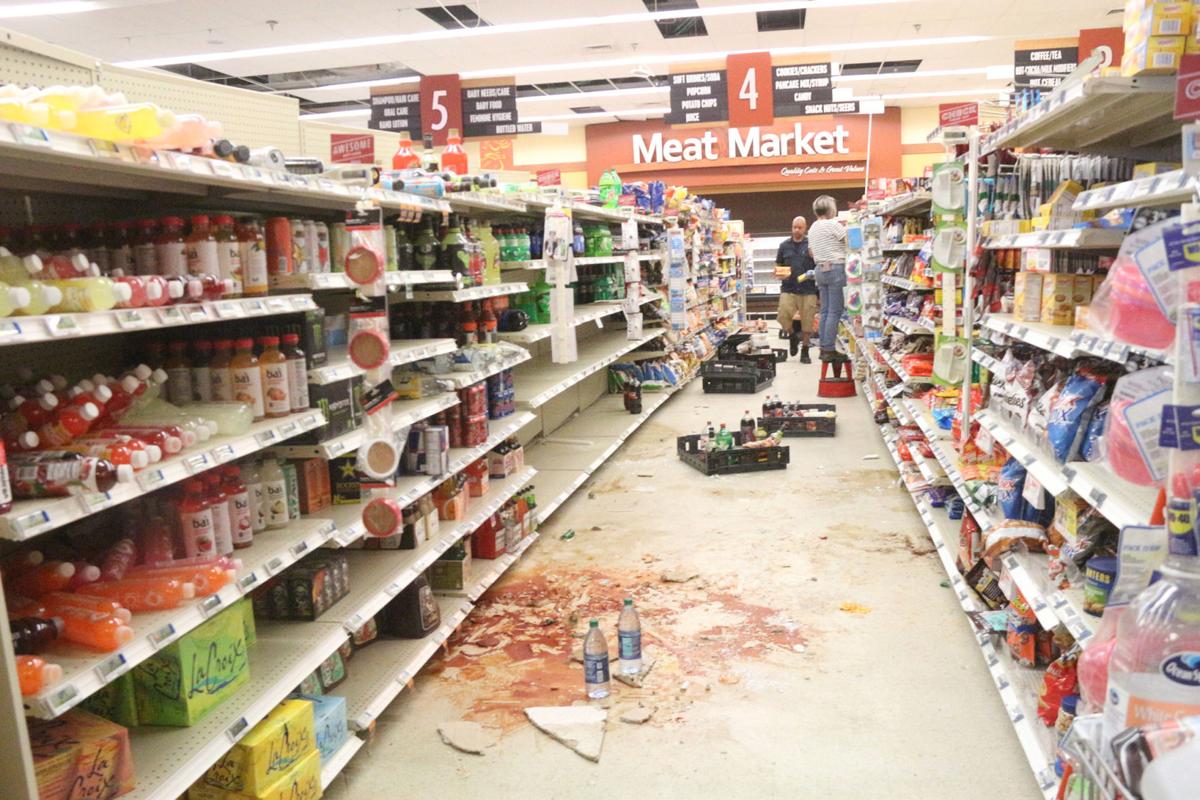 Workers at the China Lake Commissary clean up the aisles on Tuesday as part of the recovery effort following the 7.1 magnitude earthquake that hit the Ridgecrest area on Friday night. A previous 6.4 magnitude foreshock hit the area on the Fourth of July. 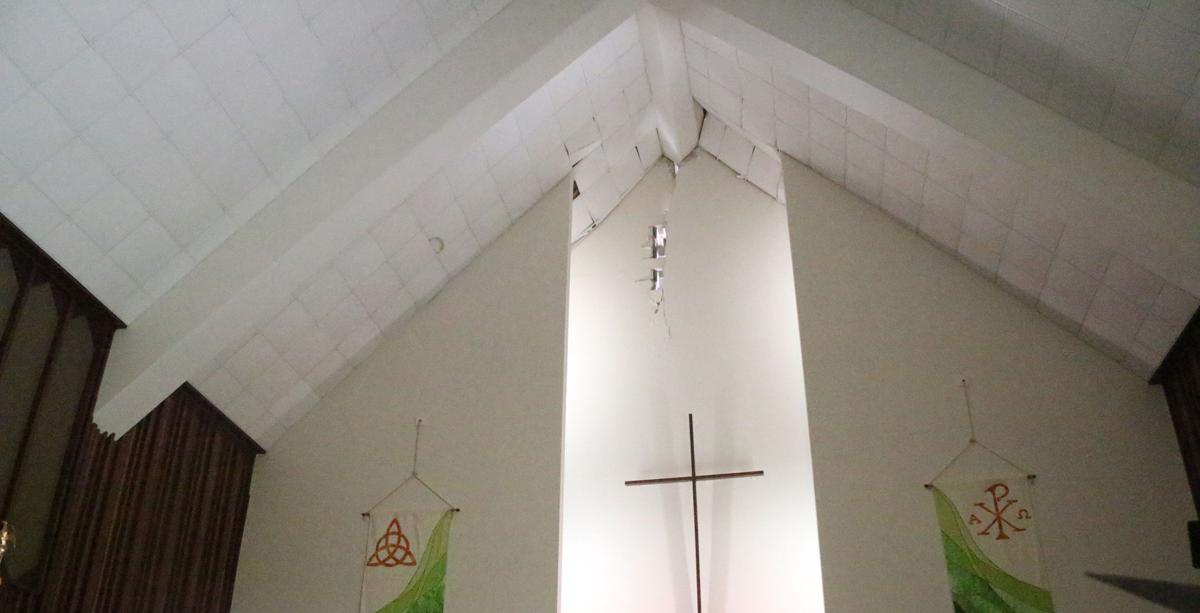 Cracks show in a part of the main chapel area at All Faith Chapel complex aboard Naval Air Weapons Station China Lake. The chapel sustained significant damage during the earthquakes. 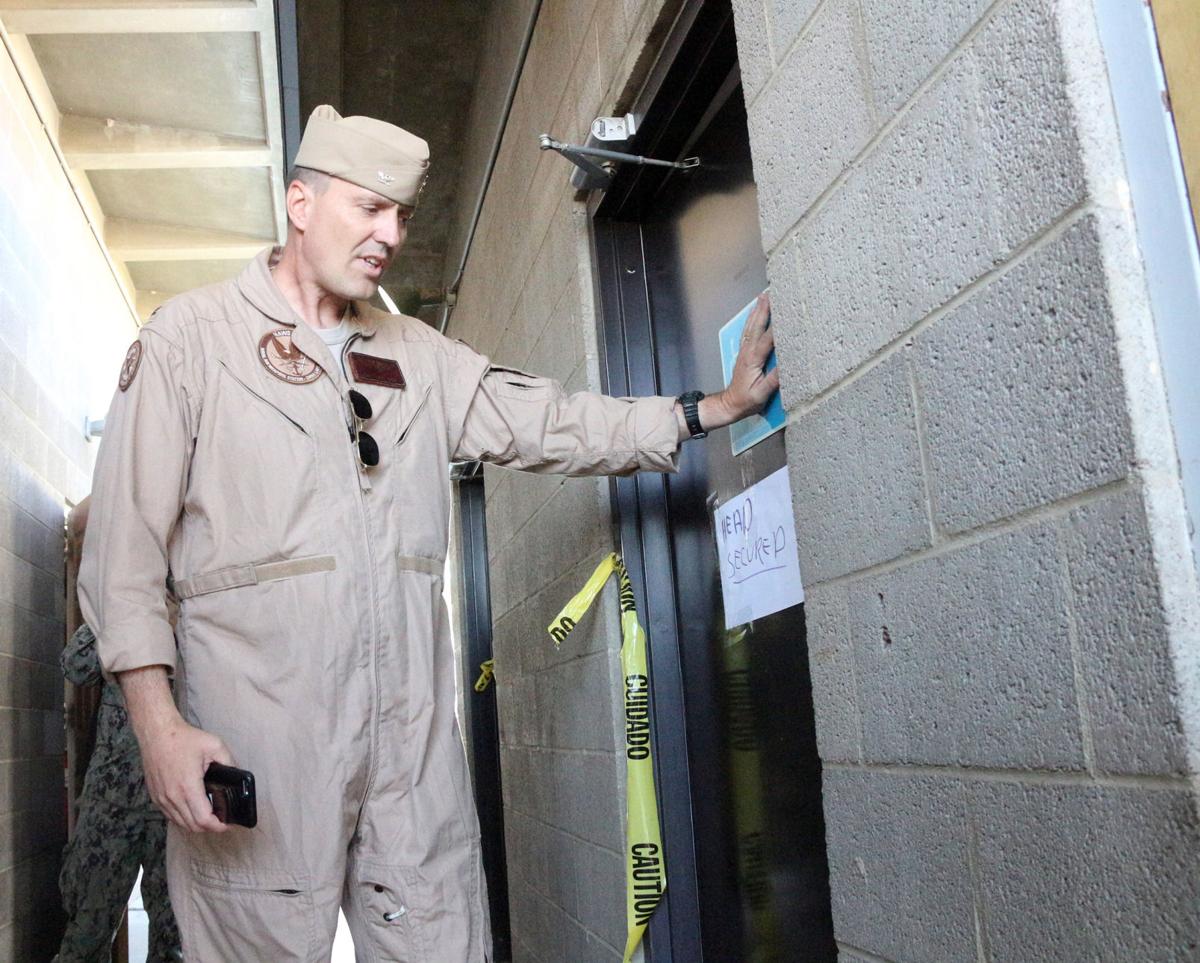 Capt. Paul Dale shows off some of the damage to the All Faith Chapel complex, including cracks in the restroom facilities.

Capt. Paul Dale, commanding officer of NAWS China Lake, and China Lake Commissary manager Phillipe Gonzaga speak with press during a tour on Tuesday. The commissary, the base’s grocery store, sustained damage during the 7.1 earthquake, including to its refrigeration area.

Workers at the China Lake Commissary clean up the aisles on Tuesday as part of the recovery effort following the 7.1 magnitude earthquake that hit the Ridgecrest area on Friday night. A previous 6.4 magnitude foreshock hit the area on the Fourth of July.

Cracks show in a part of the main chapel area at All Faith Chapel complex aboard Naval Air Weapons Station China Lake. The chapel sustained significant damage during the earthquakes.

Capt. Paul Dale shows off some of the damage to the All Faith Chapel complex, including cracks in the restroom facilities.

Only mission-essential personnel are allowed to access the base, according to Capt. Paul Dale, commanding officer of NAWS China Lake.

Most of the families have been evacuated from the installation. Normally there are about 700 to 800 military personnel and their families. About 100 mission-essential personnel remain.

“We are currently in Phase 2, Reconstitution,” Dale said. “We didn’t have any structural collapses or structural fires, but what we do have with these two major earthquakes, there was a lot of shaking and a lot of the damage is internal.”

Dale and other NAWS officials provided media a tour of some of the damage.

He said the quakes presented challenges to provide basic services such as water, gas and electricity. Those basic needs, like water and power, have been restored to most areas of the installation.

However, he said, China Lake is making progress in assessing the damage and making repairs. The Navy is 10 percent complete with its evaluation of 1,200 structures spread across the installation's 1.2 million acres.

“We are on a good trajectory,” Dale said. “There are some challenges and this will not be an overnight change back to normalcy but we’ll get there.”

Other tenant commands, including Naval Air Warfare Center Weapons Division, are currently conducting their own assessments of their facilities and assets.

There were no updates as of Tuesday on the status of the laboratories or range facilities aboard the installation.

According to an update from NAWCWD, its personnel cannot access the base through July 14 “as the assessment and evaluation of our facilities continue.”

NAWCWD facility experts and coordinators were working in conjunction with NAWS China Lake personnel to do the evaluation.

“This is is a big job, and our folks are working long hours,” NAWCWD stated in a Monday update. “We fully anticipate that some work spaces will be ready for occupancy before others.”

U.S. Geological Survey experts identified the epicenters of the largest tremors as occurring within the base’s boundaries.

According to Tim Dawson from the California Geological Survey and Ken Hudnut from the USGS, there are reports of 12-foot vertical shifts and 9-foot horizontal shifts in the landscape following the earthquakes.

ALL FAITH CHAPEL: ‘STOPPAGE IN TIME’

All Faith Chapel is one example of what many facilities looked like following the large earthquake on Friday night.

The main site of the chapel hosts services for families of military personnel who live on base, as well as the workforce. It includes the main chapel building, an east wing and offices. Catholic, Protestant, Jewish and other services are often held there or at the annex across the street.

“The damage in the chapel is a stoppage in time post-7.1 magnitude earthquake,” Dale said.

The restrooms in one of the outbuildings were significantly damaged, with cracks running through the walls.

The chapel building itself was a contradiction. The pews remained unmoved, as if untouched by the earthquake, but the altar area was in shambles.

A few streaks of sunlight peered in from cracks in the wall above the simple cross, while some furniture and items were overturned or broken. Debris was strewn across the floor of the altar.

“The main support beam is severely compromised ... part of the structural foundation was impacted,” Dale said. “It took a significant portion of the hit that we will not recover from soon.”

Following the earthquake, the lawn on the east wing served as a de facto triage center.

“The lawn was where medical stood up some tents, had food and water here,” Dale said. “It was a rallying point where families met and reacquainted with each other.”

He said there were no injuries reported following the 6.4 earthquake on Thursday morning. When the 7.1 magnitude earthquake hit Friday night, there were initial reports of three injuries. That was later whittled down to one person who was treated and released.

“We didn’t know the status of the Branch Health Clinic, so the East Wing was a place that is close to our housing and people flowed,” he said.

Due to the damage of the chapel facilities, all religious programs were relocated to specific areas in Ridgecrest.

Currently, the Branch Health Clinic isn’t operational to treat patients due to continued IT and facility issues, according to a current NAWS Public Affairs update. The same applies to the pharmacy.

At best, Branch Health can only provide basic first aid for walk-in basis and assist with medical questions. According to the update, people with TRICARE, or insurance for military personnel and their families, as well as retirees, can utilize other urgent care facilities.

Lt. Cmdr. Robert Crabb, the NAWS China Lake chaplain, said that following the first earthquake, entertainment and food were set up for families. A steak and chicken dinner initially reserved for a Marine Corps convoy were instead distributed to the those gathered at the East Wing.

“The kids were very upset, so we had videos and video games set up to distract them,” Crabb said. “Right up through the 7.1, we were hosting families here. After that, we felt that it was unsafe so we secured the chapel from any further visits and Branch Health Clinic moved to the outside of the clinic.”

Crabb said he is still interacting with families, but his main purpose is coordinating with the personnel still on base.

“My day is that I go from spot to spot, to the fire department, police department, Branch Health Clinic, and I go through housing,” he said.

Dale said the earthquakes were traumatic for many.

“It’s a traumatic event,” he said. “I have two daughters. The 6.4 is one thing, but when you have something bigger a little over 24 hours later, it reinforced the fact that there’s this concern for safety. You feel like you’re out of control and have no power to do anything.”

Dale said he was with his family and a guest when the earthquake hit.

“It was a matter of safety of family and that guest to get out,” he said. “After that, it was the need to get to the Emergency Operations Center and getting directions out to those who were initially responding to the 6.4 earthquake.”

After that, it was a priority of getting to the installation’s emergency operations center.

“It was calm at the EOC,” Dale said. “We have an amazing team and they were going through all the procedures and making the proper notifications.

Counselors are on-site for personnel to interact with, as well as counselors for children who are 11 and younger for those families still in the area but outside the fence line.

SOME BASIC NEEDS BEING RESTARTED

The Rec Stop, one of the recreational facilities for active duty, is operational and serves as a location for teen center activities. It remains one of the few areas that has a functional restroom.

“Part of the aspect of having some mission-essential personnel here, they have some child needs, so our Child Youth Development Center has been certified as structurally sound,” Dale said. He added the same applies to the student-age facility.

The Castle X building, which serves as the base’s teen center, however, was impacted by the earthquake. The Rec Stop has been serving that function.

The Navy Exchange, China Lake’s version of a convenience store, still has structural damage. Dale said some of the floors were raised and some of the beams have fallen. Exchange staff will be setting up items outside to allow personnel to come to purchase some items. In addition, the Exchange's barber shop was open for personnel on base, but only if they were escorted in.

“We’re getting clever as we start slowly bringing back our quality-of-life services,” Dale said.

In the Commissary, China Lake’s grocery store, employees were in the process of cleaning up broken items or placing things on shelves. Most of the aisle shelves were skewed from the large earthquake, instead of in straight lines.

The refrigerated sections were empty following the loss of power. Some parts of the floor were still stained and slippery from spilled liquid.

“This place was an absolute wreck and the back was even worse,” Dale said. “It was crushed after the 6.4 and after the 7.1 it was devastated. The entire ceiling and lighting came down, all the shelving was destroyed and the products were on the floor.”

A freon leak at the commissary gave off the impression there was a fire at the building.

The back end, he said, remained in really bad shape.

“What the staff is trying to do now is set up the capability to have some outdoor services,” Dale said. “The team at DECA, which runs our commissary, has been absolutely phenomenal. You couldn’t even get in this place.”

Phillipe Gonzaga, the commissary manager, said the commissary was a mess after the first earthquake, and could have been operational had it not been for the 7.1 magnitude earthquake on Friday night.

“We’d just done a lot of work after the 6.4 when the 7.1 hit, so it was like we have to start all over again,” Gonzaga said. “The main thing is that it’s safe now and so now we’re doing the main store cleanup.”

All of those engineers and resources can't get the commissary rollin' again? Call the Sea-Bees!