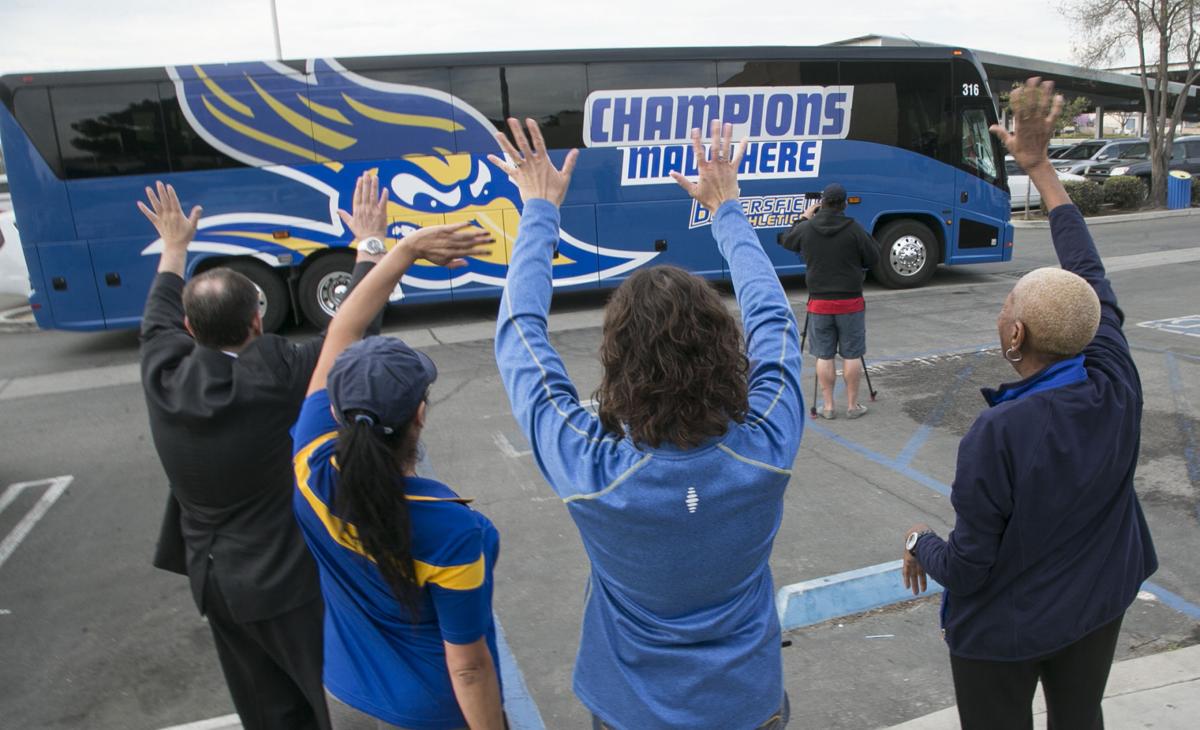 CSUB fans and staff wave to the CSUB men’s basketball team as their bus heads to LAX for a flight to Colorado State as they meet in the second round of the NIT tonight. 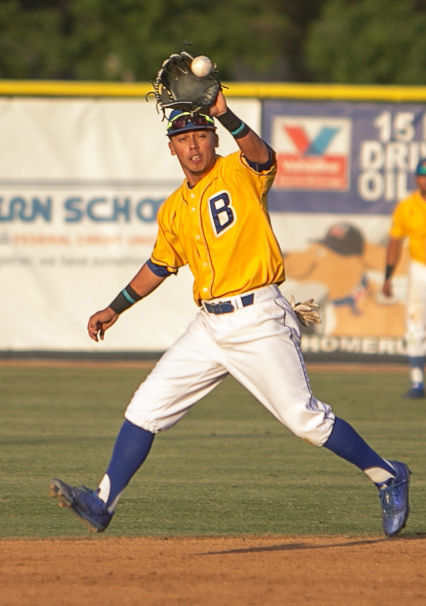 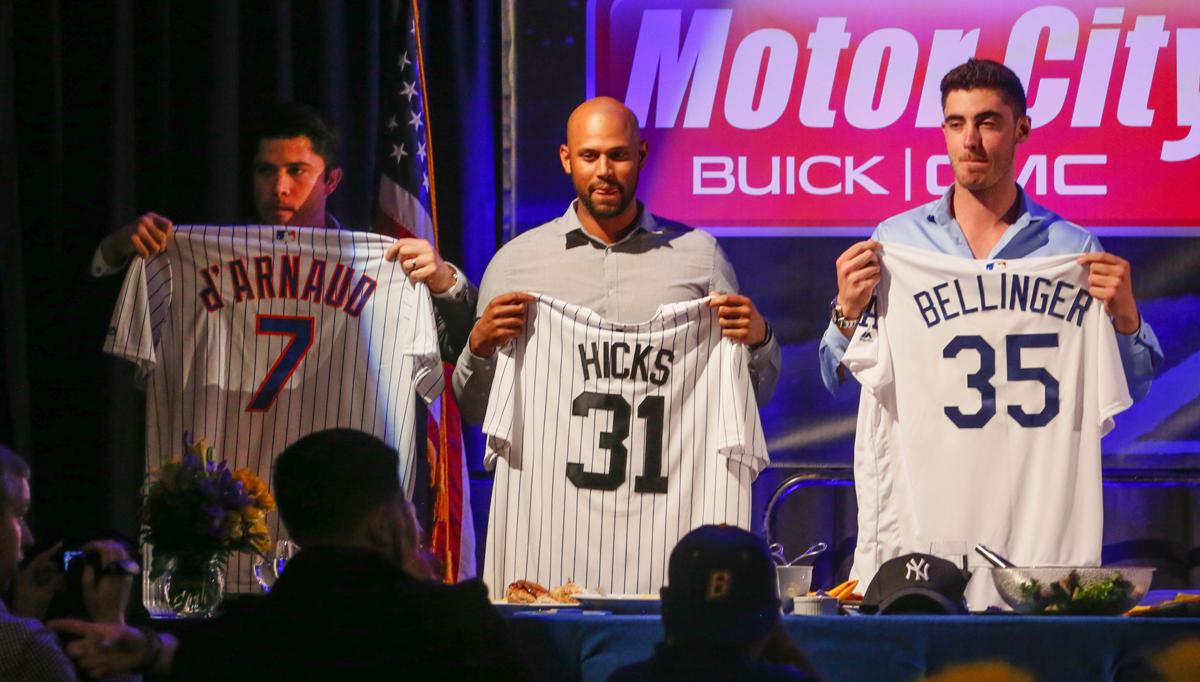 Travis D’ Arnauo, Aaron Hicks and Cody Bellinger show off their jerseys that were up for auction at the CSUB Baseball Fundraiser. 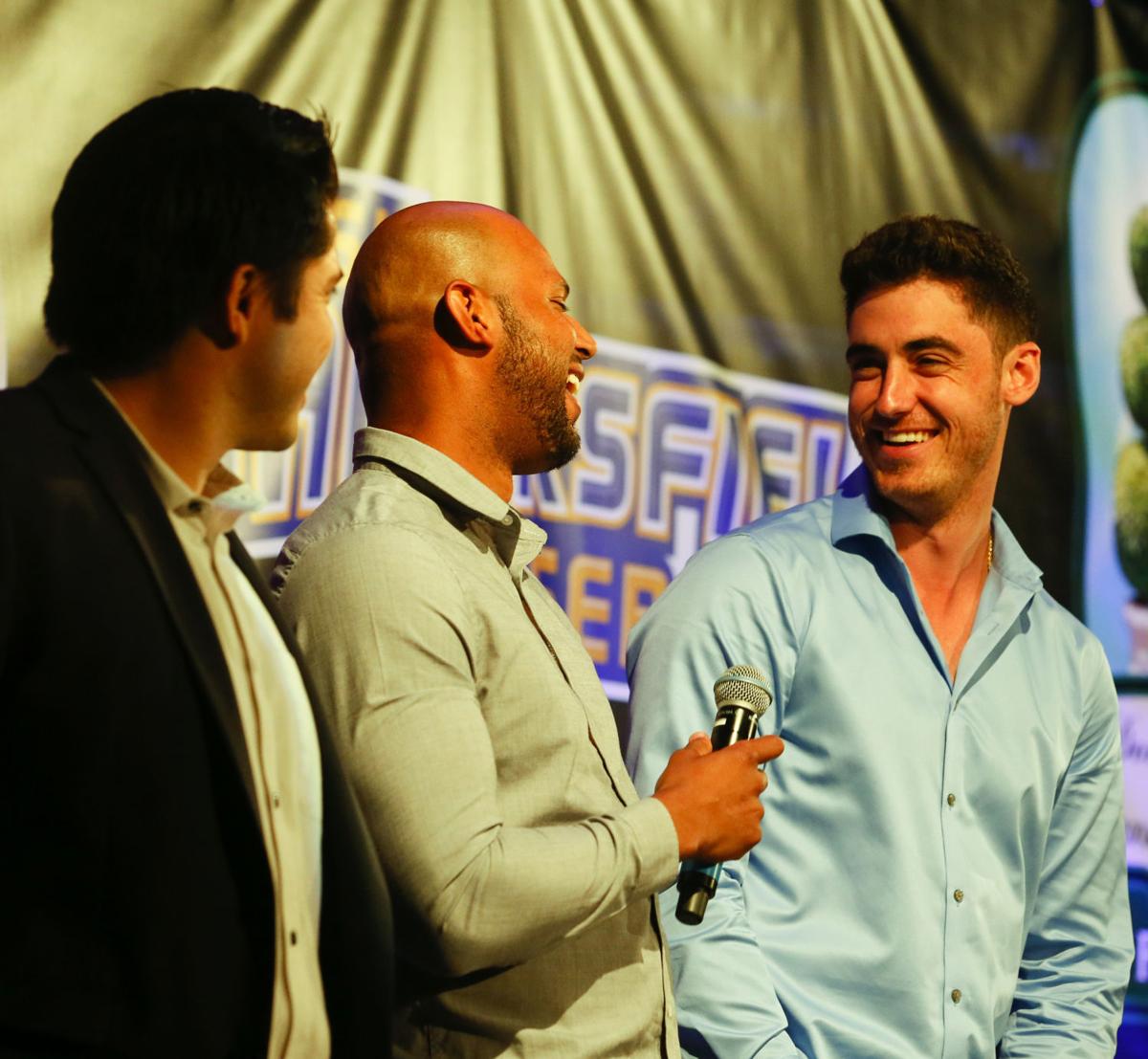 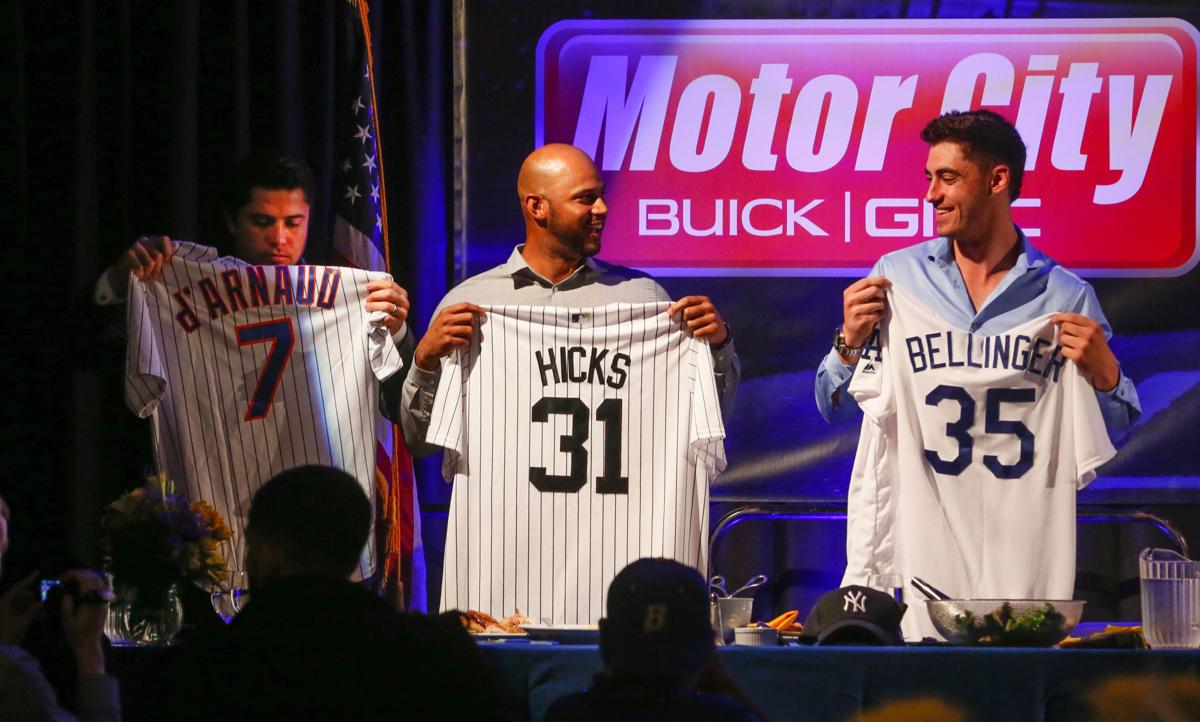 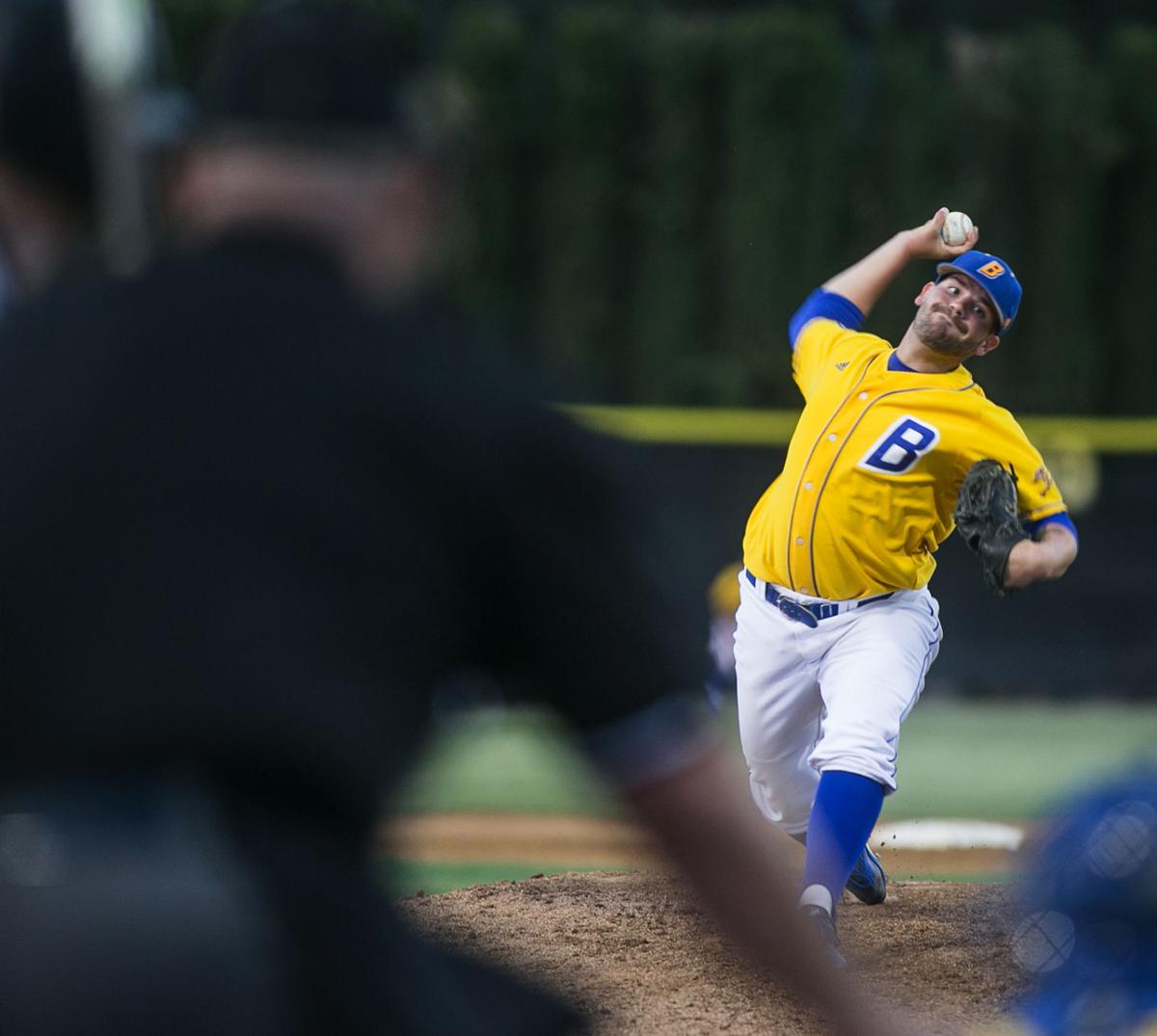 CSUB fans and staff wave to the CSUB men’s basketball team as their bus heads to LAX for a flight to Colorado State as they meet in the second round of the NIT tonight.

Travis D’ Arnauo, Aaron Hicks and Cody Bellinger show off their jerseys that were up for auction at the CSUB Baseball Fundraiser.

It was an experience none of them will ever forget: Walking through the tunnels at Chesapeake Energy Arena in Oklahoma City, past posters of Kevin Durant (remember him, OKC?) into a sea of flashbulbs and onto a court with the famed NCAA Tournament logo.

That was a year ago for Cal State Bakersfield’s men’s basketball players.

A year and two days later, CSUB plays at 8:15 tonight at Colorado State in the second round of the National Invitation Tournament.

The NIT isn’t the basketball people talk about when they say “March Madness,” but it’s reality for CSUB. And the Roadrunners are finding out reality isn’t so bad.

It helps that CSUB (23-9), which lost a chance at the dance when they lost the Western Athletic Conference Tournament final to New Mexico State, has already notched the first postseason victory in the school’s Division I history, a 73-66 win at top-seeded Cal on Tuesday in the first round.

Whereas last year’s breakthrough tournament appearance lasted roughly 48 hours, from CSUB’s arrival to the final buzzer of an 82-68 loss to Oklahoma, the NIT gave the Roadrunners nearly a week to enjoy a big victory and offers the chance to keep playing.

“Obviously we would have loved to (be) in the NCAA Tournament,” CSUB coach Rod Barnes said. “But to have this opportunity in the NIT has been good for us. It’s also kind of savor the moment. It didn’t end so quickly. We got a chance to get a big win for our program against a high-level team, and to have a couple of days to kind of get down off of that.”

Barnes also said a long run — with every game on an ESPN Network — aids recruiting, while senior Jaylin Airington has his eyes on two more wins and the chance to play an NIT semifinal in Madison Square Garden in New York, i.e., the basketball Mecca.

“You’ve got to embrace it, knowing we’re one of the few teams that still playing in the nation,” Airington said. “Then it’s trying to get to New York and try to get that same (NCAA Tournament) feeling against a team like Syracuse or something. It’s not the NCAA Tournament, but maybe if you get to the Mecca, it’ll be a similar feeling.”

First comes what should be a challenging test at Colorado State. The Rams (24-11) finished second in the Mountain West Conference and boast MWC Player of the Year Gian Clavell, a guard who averages 20.4 points and shoots 38.3 percent from 3-point range. Power forward Emmanuel Omogbo averages 13.9 points and 10.4 rebounds.

Colorado State is 12th in the nation in 3-point percentage defense (30.8) and 21st in fewest turnovers committed (15.8 percent of possessions, according to kenpom.com).

CSUB, meanwhile, thrives on forcing turnovers (23.4 percent of possessions, ninth-best in the country).

Add in the 5,000-foot altitude at Moby Arena in Ft. Collins, Colo., and the Roadrunners figure to have their hands full.

“(Colorado State) coach Larry Eustachy is a friend of mine, and he’s always been a great defensive mind and a guy that’s won everywhere he’s been,” Barnes said.

“They’ve got a great atmosphere, and it’s going to be a challenge for us.”

Then again, the Roadrunners won’t complain. It’s not the NCAA Tournament, but they’re still playing.

“After the game against New Mexico State, obviously we were real disappointed, but coach Barnes and the coaching staff did a real good job changing our focus to the NIT,” said Wrapp, who will be playing in his home state tonight.

“That’s not what we wanted out of the WAC Tournament, but now we got this in front of us, and we can’t let this moment pass us just because we’re disappointed about something else.”

RALLY TODAY: Cheer the Roadrunners as they return to Bakersfield after win over UT Arlington

Welcome home the Cal State Bakersfield Roadrunners after their win over UT Arlington.

Show your support by downloading and printing the Go Runners poster as the CSUB men's basketball team plays in the National Invitation Tournament at Madison Square Garden. Snap a photo of you and the poster and email it to photos@bakersfield.com.

When and Where to Watch

Temblor
If you're wearing yellow and blue, Temblor will give you happy hour pricing.

Firestone Grill Firestone will be showing the game on all 28 TVs...

PHOTO GALLERY: Fans, near and far, show their support for the CSUB Runners

Show your support with your poster photos. Display at your house or hang it in the window of your business. Don't forget to snap a photo of yourself with the poster or wear blue and gold at yo…

NEW YORK — On its biggest stage, Cal State Bakersfield had a big disappointment.