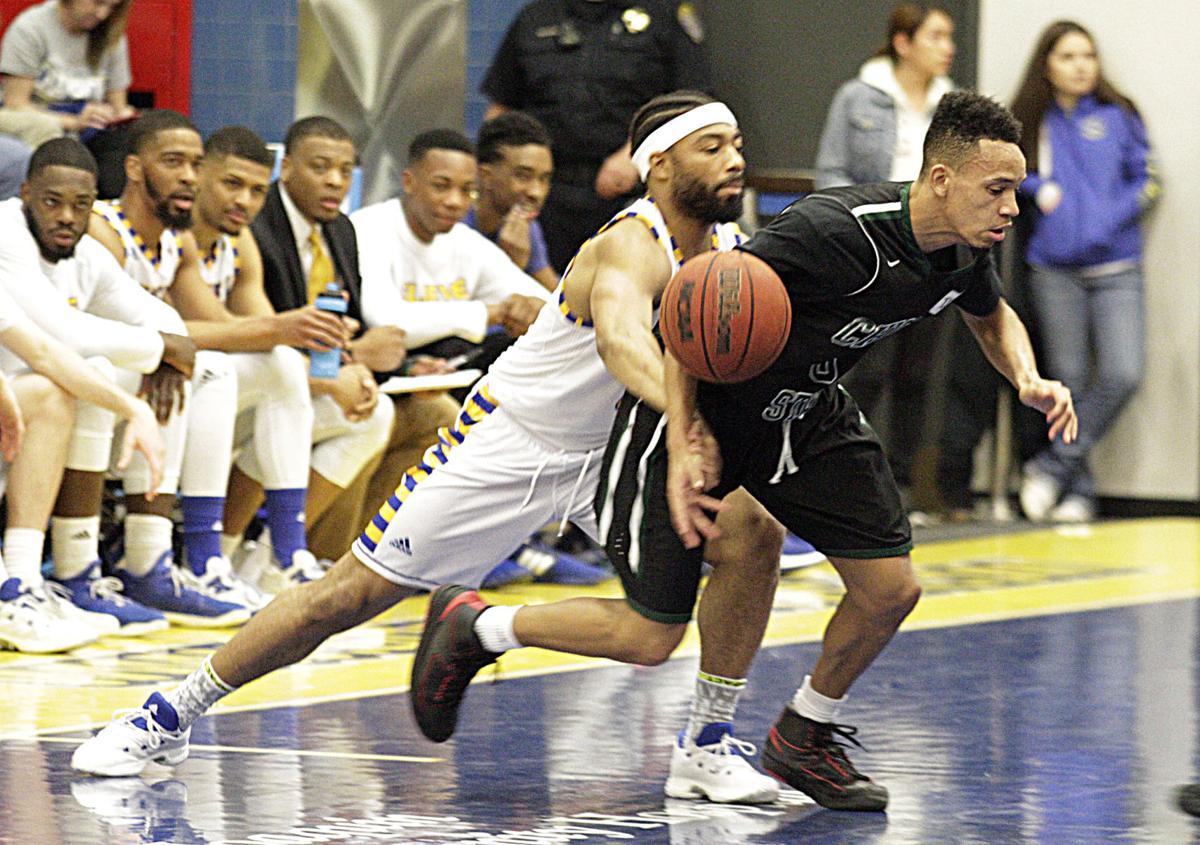 CSUB’s Justin Pride forces a turnover from Chicago State’s Anthony Eaves during a game at the Icardo Center in February. CSUB ranks in the top-30 in three defensive categories in the nation. 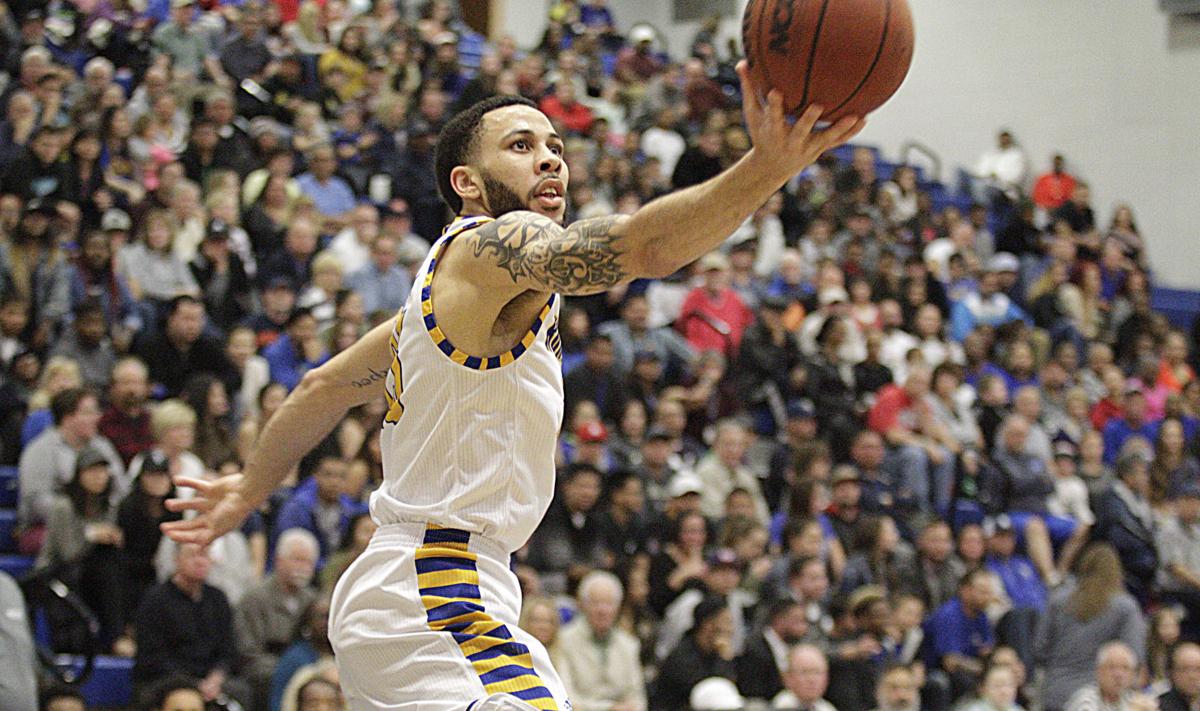 CSUB guard Damiyne Durham, who transferred from Baylor in 2015, goes up for a shot against Chicago State at the Icardo Center in February 2017. 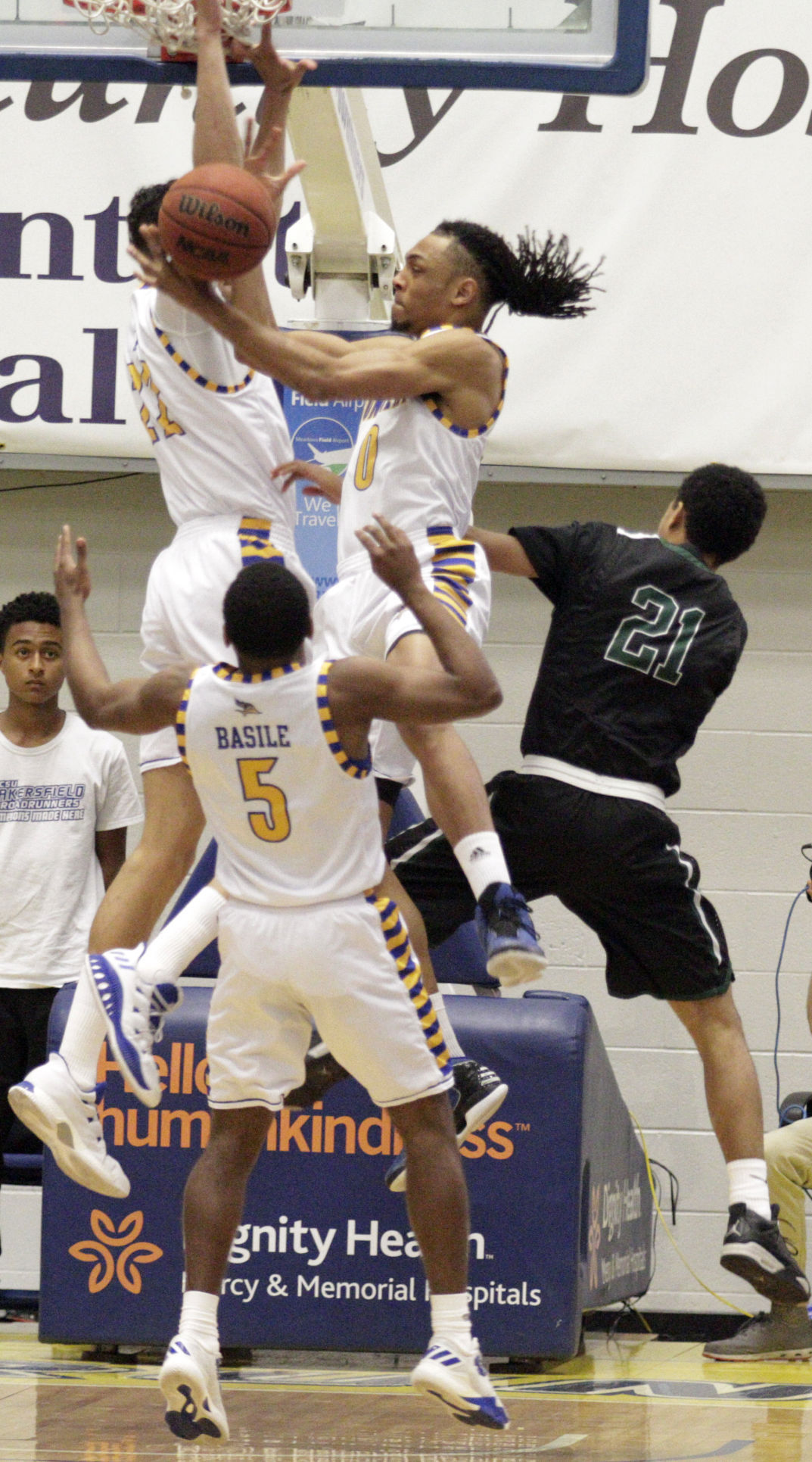 CSUB’s Justin Pride forces a turnover from Chicago State’s Anthony Eaves during a game at the Icardo Center in February. CSUB ranks in the top-30 in three defensive categories in the nation.

CSUB guard Damiyne Durham, who transferred from Baylor in 2015, goes up for a shot against Chicago State at the Icardo Center in February 2017.

A year after reaching the NCAA Tournament for the first time in the school’s Division I history, Cal State Bakersfield is making waves again in the magical basketball month of March.

On Tuesday, the Roadrunners make their Madison Square Garden debut in a National Invitation Tournament semifinal against Georgia Tech.

The NIT is college basketball’s oldest postseason tournament, and CSUB has had a startlingly successful debut: The Runners won their first-round game 73-66 at Cal, routed Colorado State 81-63 in another away game and then held off Texas-Arlington 80-76, also on the road.

The result is that more people, both in Bakersfield and around the country, are following the Roadrunners. The program’s number of fans is bigger, perhaps, even than it was in the 1990s, when CSUB won two Division II national championships.

Speaking of which, how much do you know about CSUB’s Division II history? Here’s more on that and four other Roadrunner basketball facts to help catch new fans up — and refresh those checking back in — before the NIT resumes this week.

Division II men’s basketball was, for most of its history, controlled by schools from the East, South and Midwest. Only one school, Puget Sound in 1976, from the West Coast had won the D-II national championship in the first 36 years of the division’s existence.

That changed in 1993 when CSUB, led by coach Pat Douglass and 3-point sharpshooter Kenny Warren, went 33-0 and beat Troy 85-72 for the national championship. The Roadrunners repeated the following year and won a third title in five years in 1997.

But this was no flash in the pan. CSUB was a competitive program from the start, going 21-5 in its inaugural season of 1971-72 and winning a postseason regional game the following year.

In fact, when CSUB left the Division II ranks after the 2005-06 season, the Roadrunners had the best winning percentage of any active D-II program at .710.

CSUB has had its share of great local players — its career scoring leader, in fact, is Garces graduate Stephon Carter — but this particular team is full of out-of-state players who have transferred from other schools.

Of the 11 Roadrunners who have played significant minutes this season, nine of them first attended another program, either a junior college or another four-year school. The only exceptions: Point guard Brent Wrapp, who’s from Boulder, Colo., and freshman guard Taze Moore, a Mississippi native who is out for the season with a broken leg.

Most players say they’ve embraced Bakersfield as a second home, and a local infusion is on the way with Ridgeview senior Justin McCall, who signed with CSUB in November. Another local, Bakersfield High junior Ronnie Stapp, is verbally committed to the Roadrunners.

If you’ve only watched the Roadrunners during the NIT, you might think they’re an exceptional 3-point shooting team. That’s not actually the case: Even after a barrage of 32 treys in the first three rounds of the tournament, CSUB is shooting just 34.2 percent from long range against Division I opponents. That’s a middling 211th in the country.

What CSUB is very good at? Pretty much anything having to do with defense. The Roadrunners’ in-your-face guarding makes them the No. 3 team in the nation 2-point percentage defense (40.7 percent), No. 9 at forcing turnovers (23.2 percent of defensive possessions) and No. 28 in 3-point percentage defense (31.7 percent). All numbers are against D-I competition only and from KenPom.com.

An Achilles’ Heel? There are two big ones.

The first is that the aggressive defense can backfire in the form of fouls. CSUB commits an average of 22.7 fouls per game, seventh-most in the country.

On the other end of the court, only eight teams have a worse free-throw shooting percentage than the Roadrunners’ 63.7 percent.

After CSUB lost two all-conference frontcourt seniors, Kevin Mays and Aly Ahmed, from last year’s team, the Roadrunners were almost certain to rely on their guard play this season.

Airington has 1,038 career points in three seasons, which is 18 shy of cracking CSUB’s all-time top 10.

Basile already has his named etched in Roadrunners lore: He hit the buzzer-beating 3-pointer to win the Western Athletic Conference Tournament last year and send the team to the NCAA Tournament.

Durham, who transferred from Baylor before playing a game, is a gunslinger from Texas. He takes 39.5 percent of the team’s shots when he’s on the court, a rate that ranks No. 3 in the country, according to KenPom.com.

Though many CSUB alumni have played professionally overseas, only one former Roadrunner has played in the NBA: 6-foot-8 forward Kebu Stewart, a UNLV transfer who played two seasons from the Roadrunners from 1995-1997 and is No. 4 on the all-time scoring list.

None of the current Roadrunners seem likely bound for the NBA, so perhaps recruiting and developing prospects of that caliber is the next step in the program’s steady development.

Show your support by downloading and printing the Go Runners poster as the CSUB men's basketball team plays in the National Invitation Tournament at Madison Square Garden. Snap a photo of you and the poster and email it to photos@bakersfield.com.

When and Where to Watch

Temblor
If you're wearing yellow and blue, Temblor will give you happy hour pricing.

Firestone Grill Firestone will be showing the game on all 28 TVs...

PHOTO GALLERY: Fans, near and far, show their support for the CSUB Runners

Show your support with your poster photos. Display at your house or hang it in the window of your business. Don't forget to snap a photo of yourself with the poster or wear blue and gold at yo…

NEW YORK — On its biggest stage, Cal State Bakersfield had a big disappointment.