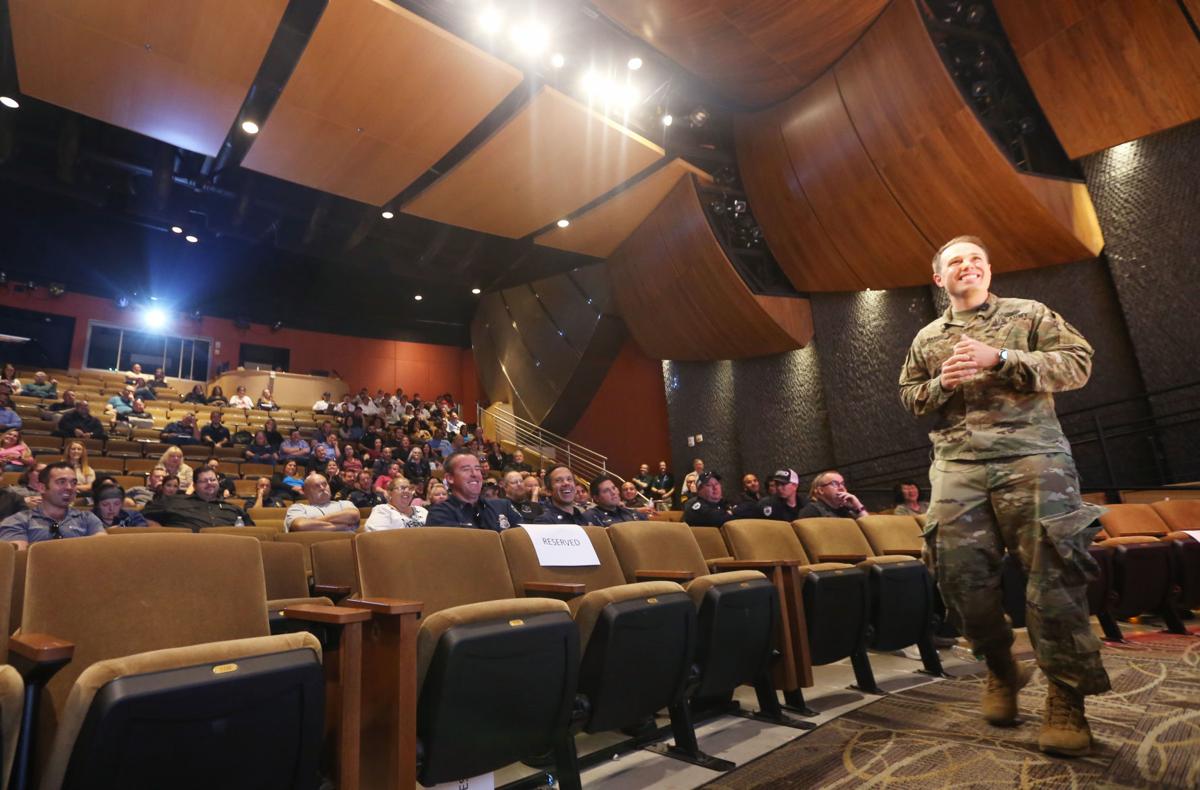 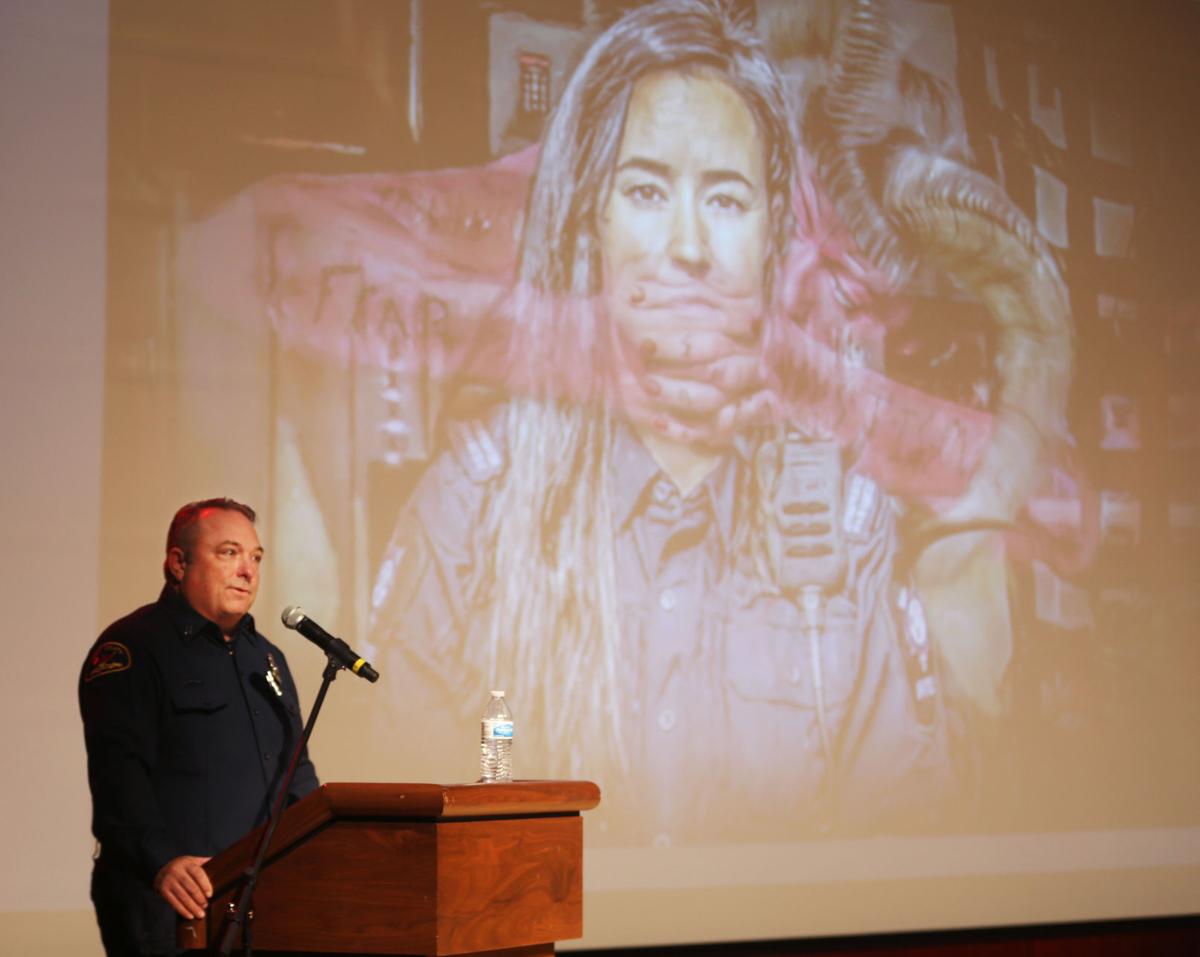 Kern County Fire Department Capt. Robert Hudson spoke about his son at the first Mental Health Symposium at Bakersfield College in 2019. The goal of the event was to provide information designed to assist attendees in recognizing signs and symptoms of depression caused by post-traumatic stress disorder.

Kern County Fire Department Capt. Robert Hudson spoke about his son at the first Mental Health Symposium at Bakersfield College in 2019. The goal of the event was to provide information designed to assist attendees in recognizing signs and symptoms of depression caused by post-traumatic stress disorder.

Jeff Fariss is no stranger to the bad days that come with being a first responder.

He also knows far too well what it's like dealing with post-traumatic stress disorder, and not seeking help.

Fariss, then a field supervisor with Hall Ambulance, was one of the first individuals who responded to the 2006 Maple Avenue explosion. According to a news story from The Californian, a group of children had been playing with a 40 mm military round owned by an uncle of one of the children, who thought the gunpowder had been removed from the explosive.

The round detonated, killing one 7 year old at the scene, and another 7 year old later at Kern Medical.

He also helped his fellow paramedic and friend after they had been hit by a car.

Despite all the trauma those incidents have caused, Fariss chose not to seek help, mainly because of the stigma attached to it.

"Back in my day, the stigma that’s out there says 'Suck it up, buttercup, this is the job you wanted, deal with it,'" he explained. "That is absolutely the worst possible advice to give somebody, and that has led to the increasing suicide rate (among first responders)."

Today, he is the Emergency Medical Services program manager for Kern County Public Health Services Department Services, and it's his mission to help other first responders get the mental health services they need.

According to statistics from the Substance Abuse and Mental Health Services Administration, it is estimated that 30 percent of first responders develop behavioral health conditions, such as depression and post-traumatic stress disorder, compared with 20 percent in the general population. A study shows that firefighters were reported to have higher suicide attempt and ideation rates than the general population. Additionally, estimates suggest between 125 and 300 police officers across the country die by suicide every year.

Despite these numbers, first responders still have a hard time reaching out to others and finding the resources they need. The stigma attached to mental health is still one that deters many from seeking help.

Veronica Munoz, disaster response coordinator for Kern Behavioral Health and Recovery Services, described keeping trauma and distressing moments bottled down like a jack in the box.

"Every event that you experience and don’t allow yourself to process is like turning the knob tighter. You don’t know which turn of the knob will cause it to come out," she explained.

One first responder, she recalled, experienced four deaths in one shift. At one accident scene, he witnessed a dead horse, which brought back many childhood memories of a horse and his experiences with it. That accident scene was the one that got to him emotionally.

"We never know which event or experience will trigger that release of emotion," Munoz said. "Our goal is to help folks not suppress them and have them build up."

Knowing what first responders see on a daily basis and keep inside, Kern County has tried to break down the stigma associated with mental health and asking for help.

Last year, the first Mental Health Symposium was put on to help first responders and community members recognize the signs and symptoms of depression and PTSD. Various speakers shared their experiences, including a San Diego firefighter who was stabbed while on duty. He healed physically, but soon realized he had post-traumatic stress disorder, having nightmares and becoming jumpy.

He decided to ask for mental health help and encouraged other first responders to do the same.

"One of my closest friends in the field I ran into and I asked her after the presentations what she thought and she said she couldn’t stop crying," explained Fariss, who was one of the organizers. "It was very emotional for a lot of people and it hit home."

Among the 300 attendees who participated in the event, Fariss said several decided to reach out for help that day, and the number has grown since.

For the first time in 2018, a request was made statewide to help law enforcement officials who went through distress trying to evacuate victims following the Camp Fire in Northern California, and BHRS officials responded to the call, which helped shed light on the subject.

Munoz added BHRS has a certificated critical incident stress management team ready to help first responders whenever necessary. She also said a mobile evaluation team, which corresponds with law enforcement, heard officers discussing mental health out in the open, which "could take the shadow off of seeking mental health services."

"Our heroes are heroes. They always feel the services are for someone else who may need it more, and they’re used to putting others first that it’s difficult to seek the services," Munoz said. But "there's enough sunshine for all of us out there."