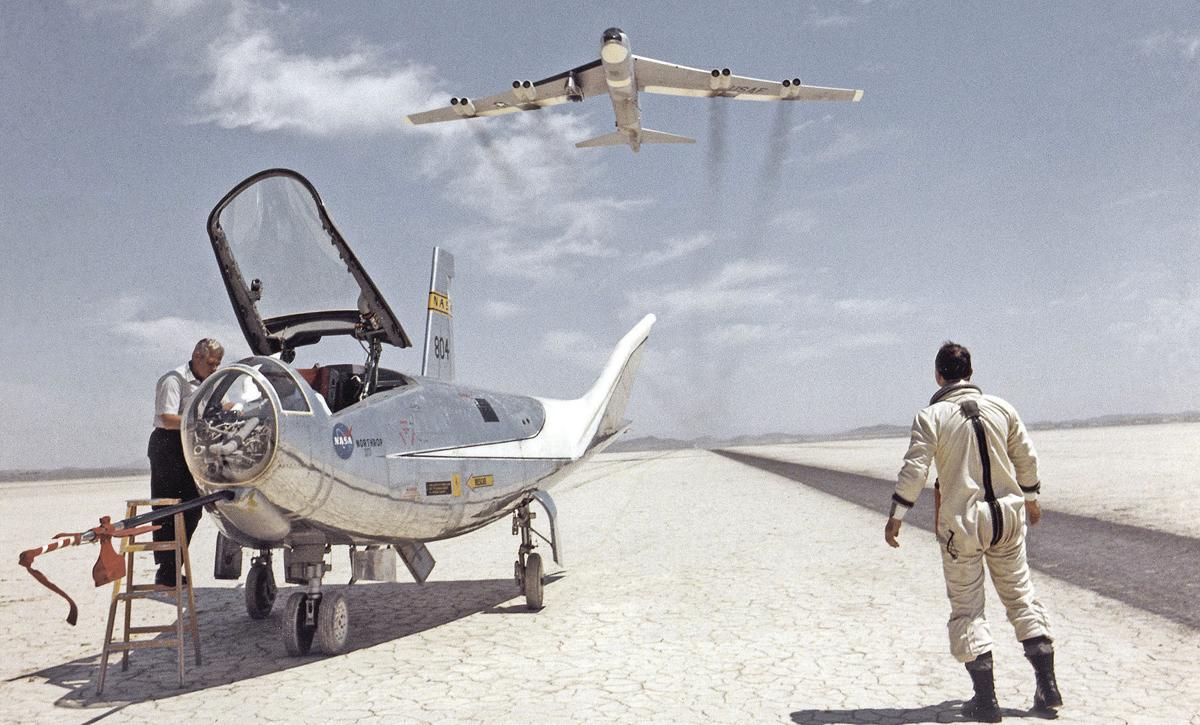 In this classic photo shot on Rogers Dry Lake at Edwards Air Force Base Nov. 30, 1968, NASA test pilot Bill Dana turns to watch the B-52 carrier plane make a fly-by after Dana completed a test flight of the HL-10, a variation of an experimental lifting body aircraft. Dana, who grew up in Bakersfield, tested the HL-10 in the late 1960s and early 1970s. 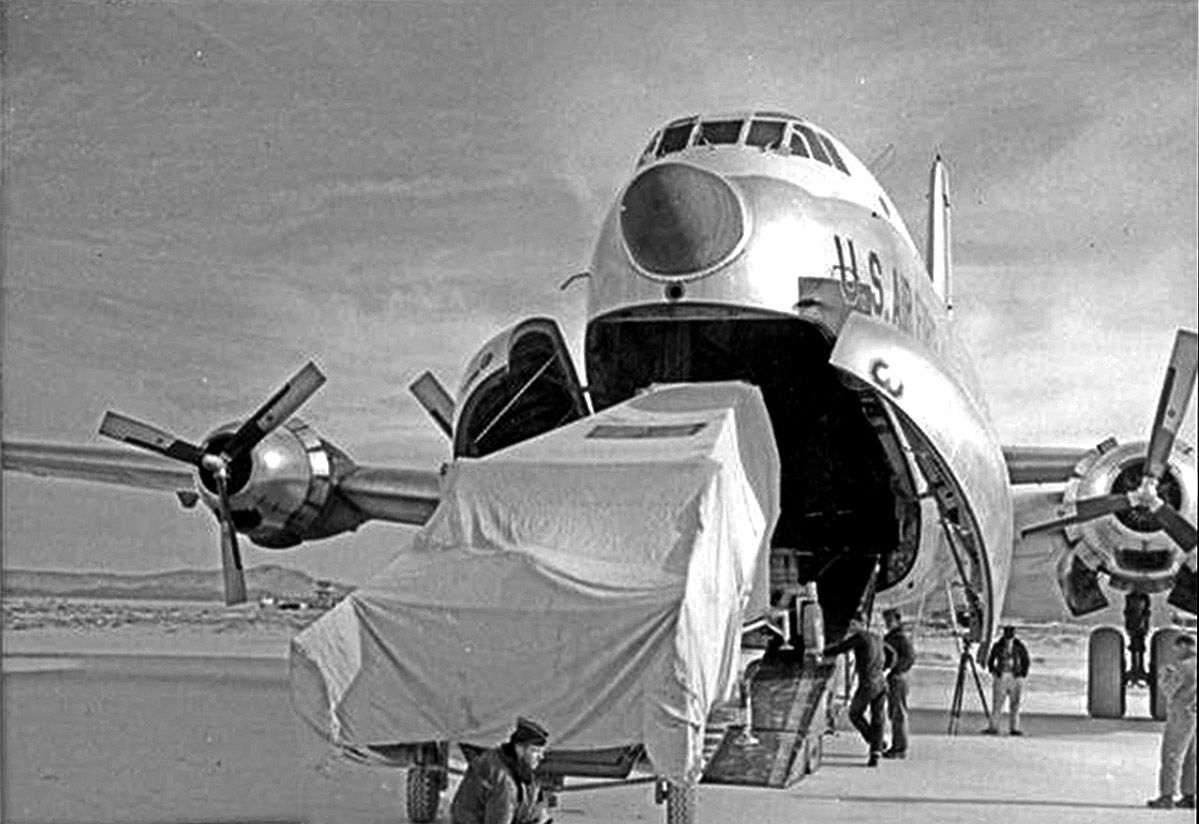 Parts of a U-2 being loaded onto a cargo plane for transport to Groom Lake (Area 51). 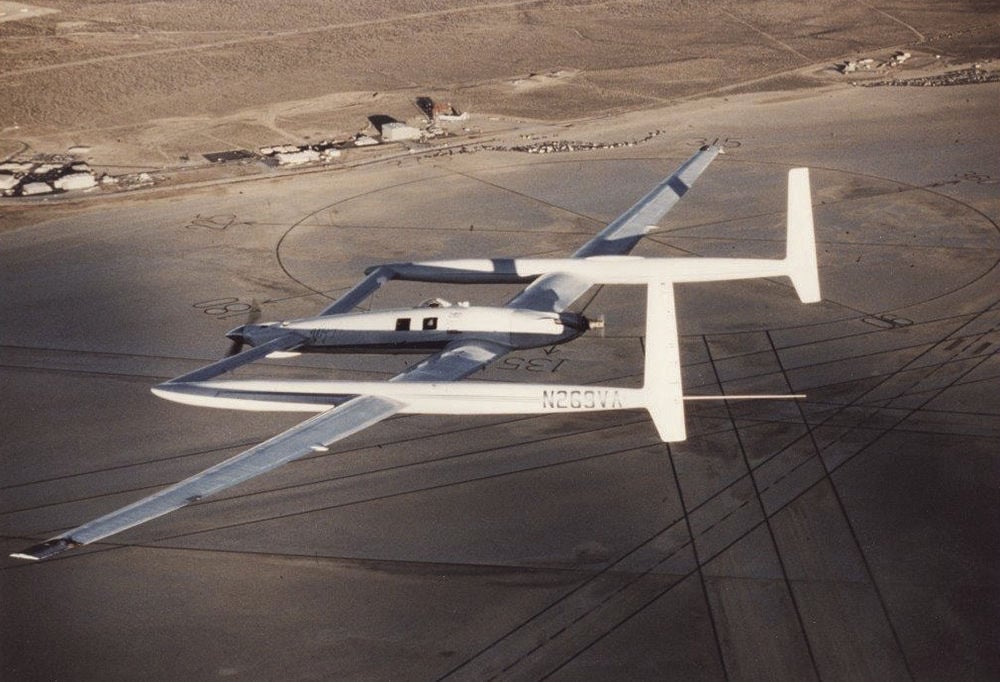 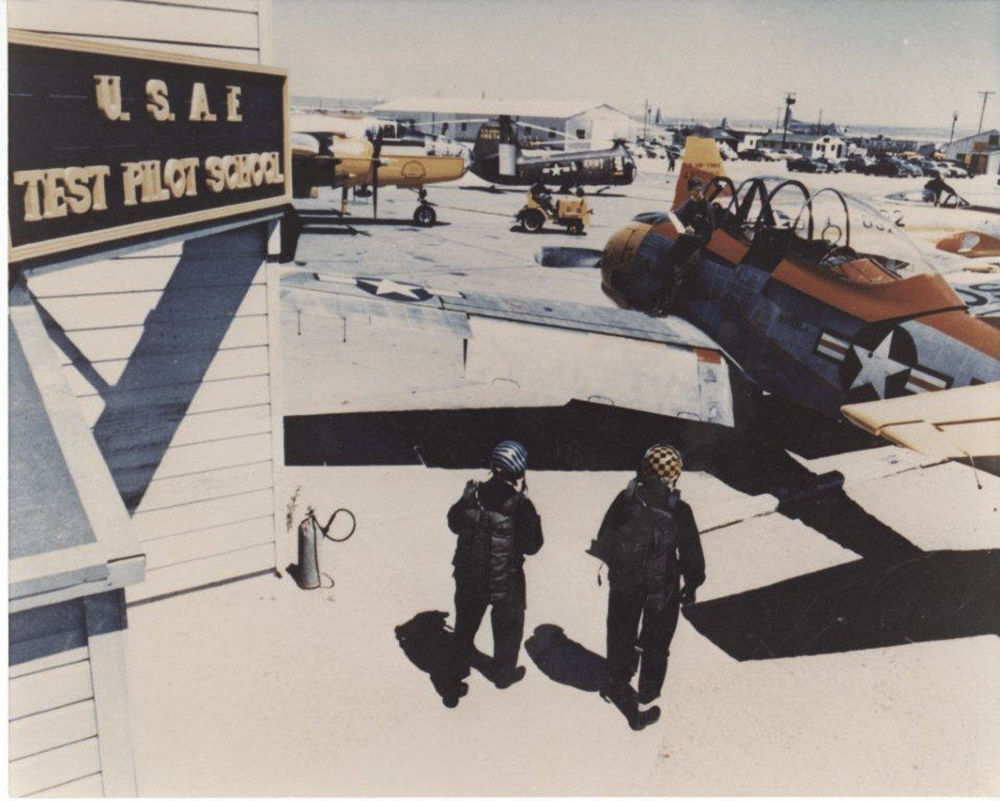 The Edwards Air Force Base Test Pilot School in the 1950s.

In this classic photo shot on Rogers Dry Lake at Edwards Air Force Base Nov. 30, 1968, NASA test pilot Bill Dana turns to watch the B-52 carrier plane make a fly-by after Dana completed a test flight of the HL-10, a variation of an experimental lifting body aircraft. Dana, who grew up in Bakersfield, tested the HL-10 in the late 1960s and early 1970s.

Parts of a U-2 being loaded onto a cargo plane for transport to Groom Lake (Area 51).

The Edwards Air Force Base Test Pilot School in the 1950s.

One of the signature books (and films) of the 1980s was "The Right Stuff," Tom Wolfe's outstanding look at the early years of Edwards Air Force Base and the fabled test pilot program. In the years before and after World War II, Muroc Army Air Field (later Edwards) would be home to most of the major aerospace firsts.

Chuck Yeager broke the sound barrier in the X-1 Rocket Plane in 1947. Edwards was where the first flying wing took flight, and where the highest and fastest flights in history occurred, as well as ground zero for development of the U2 and SR-71 Blackbird spy planes, the B-1 bomber, the Space Shuttle, and the entire inventory of stealth planes in the U.S. Air Force.

Army Air Force Officer Henry "Hap" Arnold first sent pilots and crew to train at what was Muroc Dry Lake in 1933 due to its remoteness, the 360 days of flying weather Kern County offers, and the presence of the Muroc (now Rogers) Dry Lake Bed, an ancient feature that offers miles of runway space that eventually would be augmented by construction of concrete runway extensions.

As early as the 1920s, Southern California had become the center of aircraft design and manufacturing, so the Mojave Desert was an ideal place to test dangerous craft in safe flying conditions in close proximity to manufacturers and engineers.

During World War II, Muroc trained B-17, B-24, B-25 and B-29 bomber crews, as well as a substantial number of fighter pilots who trained on P-38s, P-51s and other aircraft. The military constructed a wooden model of a Japanese destroyer, the "Muroc Maru," to add realism to the training.

The first prototype jet aircraft were flown at Muroc during World War II, establishing a role for the base as the location for experimental craft and the test pilots who flew them. As the film "The Right Stuff" depicts so vividly, the desert base, home to the Air Force (Dryden) Flight Test Center, became the home to sometimes lonely servicemen and their families, but the boredom was overcome by the cutting-edge nature of the work and the sobering reality of crashed airplanes and dead pilots.

Kern County was the place where World War II hero Charles "Chuck" Yeager strapped himself into the X-1 and broke the invisible barrier of sound. With the Cold War prodding them, the scientists and pilots at Edwards pushed the limits of aerospace technology. Soon pilots were reaching Mach II, then Mach III, and faster, as the altitude record soared from 100,000 feet to 200,000, to 300,000 feet and beyond.

As the base grew, the communities around Edwards also expanded. The newly established (1947) U.S. Air Force built schools, hospitals and swimming pools, among other amenities, for the growing population of service personnel, their dependents and the civilian populations that supported the base.

Minter Field in Shafter also played a significant role in Kern County aerospace history. As World War II broke out in Europe, news of a major training base in Kern County frequently appeared in The Bakersfield Californian. In 1940 construction began outside Shafter and over the next five years, some 11,000 pilots earned their wings at Minter Field, where they trained along with navigators, mechanics and support staff.

Building living quarters and finding wholesome entertainment for the trainees were major obstacles to overcome early in the story. Hundreds of Women's Army Auxiliary Corps members were trained at the base. There was an apparent double standard when it came to the recreational agenda, as the women were forced to observe a set of rules governing entertainment and night outings that didn't apply to their male counterparts.

Large military installations create civilian jobs and require many services from local businesses and contractors. That was true in World War II, and the growth of the Military-Industrial Complex after the war created peripheral economic activity that became an essential part of the economy, particularly in east Kern.

In 1969, Cal Poly San Luis Obispo graduate Burt Rutan started the Rutan Aircraft Factory in Mojave. Rutan had made a name for himself in aircraft design and for his use of advanced composites in aircraft manufacturing.

Rutan would eventually create Scaled Composites and served as a catalyst in the establishment of the Mojave Spaceport. Rutan's Voyager I was the first aircraft to fly around the globe non-stop without refueling, with his brother Dick and Jeanie Yeager (no relation to Chuck) piloting the revolutionary plane. Rutan's SpaceShipOne was the first prototype for recreational civilian spaceflight, winning the highly sought after X-Prize.

From the exigencies of world war to the competitive Race to Space, Kern County has a rich and fascinating role in the history of aerospace, though progress also has its costs. When military budgets are downscaled, there is a ripple effect in the local economy. Also, due to the nature of the research and testing at Edwards, there are several toxic areas on the base that will take decades to restore.

Randal Beeman earned his doctorate in agricultural history and rural studies from Iowa State University. He is an emeritus professor of history at Bakersfield College.