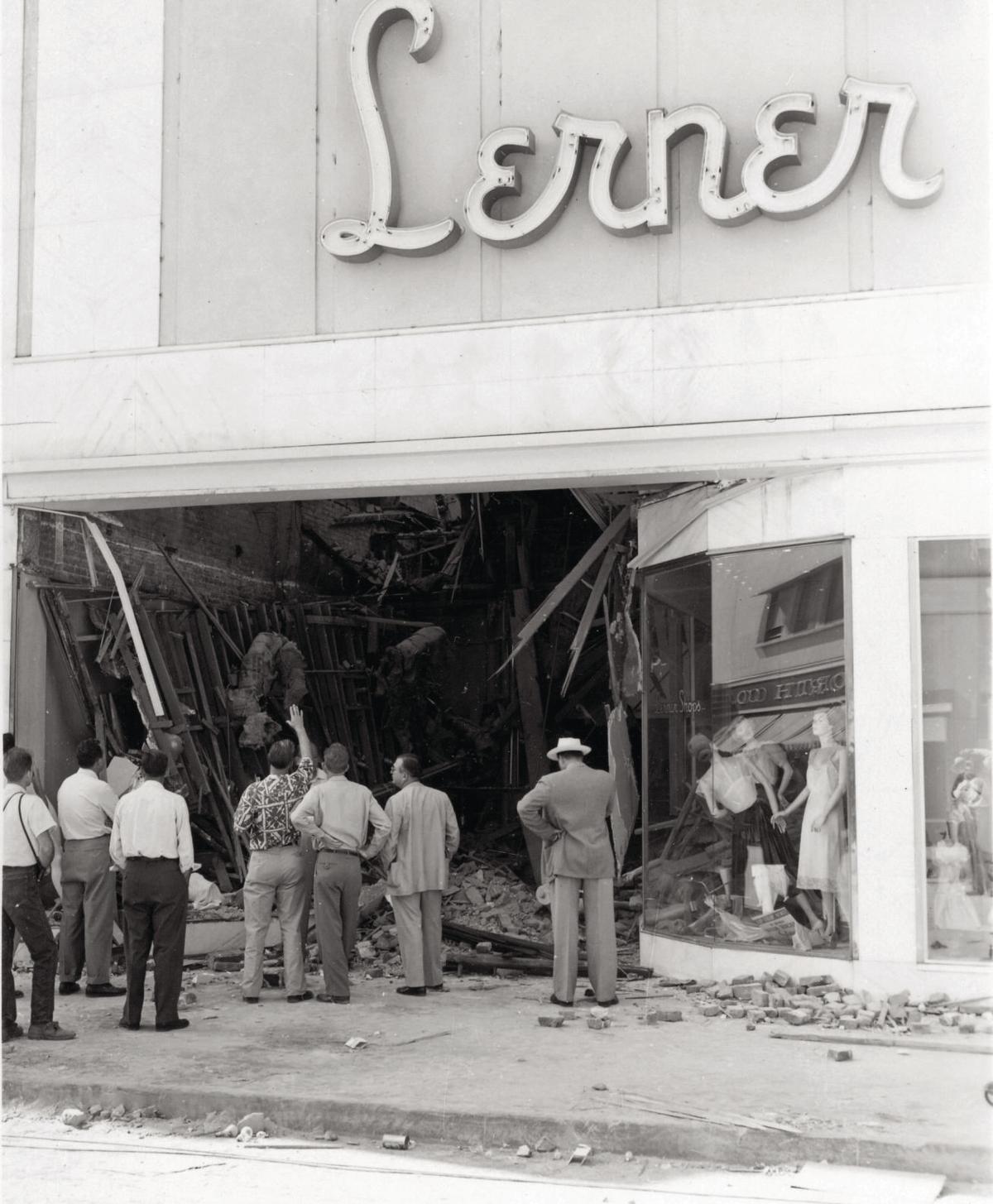 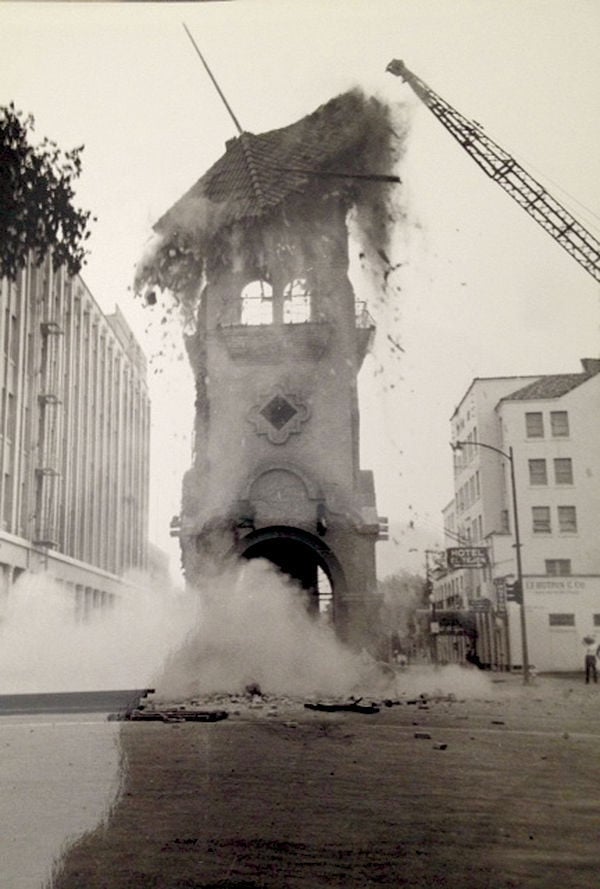 The 64-foot Beale Clock Tower stood at the corner of 17th Street and Chester Avenue for 48 years but, severely damaged by the 1952 earthquake, was demolished by city workers. The only parts to survive were the clock works, bell, iron spiral stairwell, balcony railings, and arch iron grillwork. 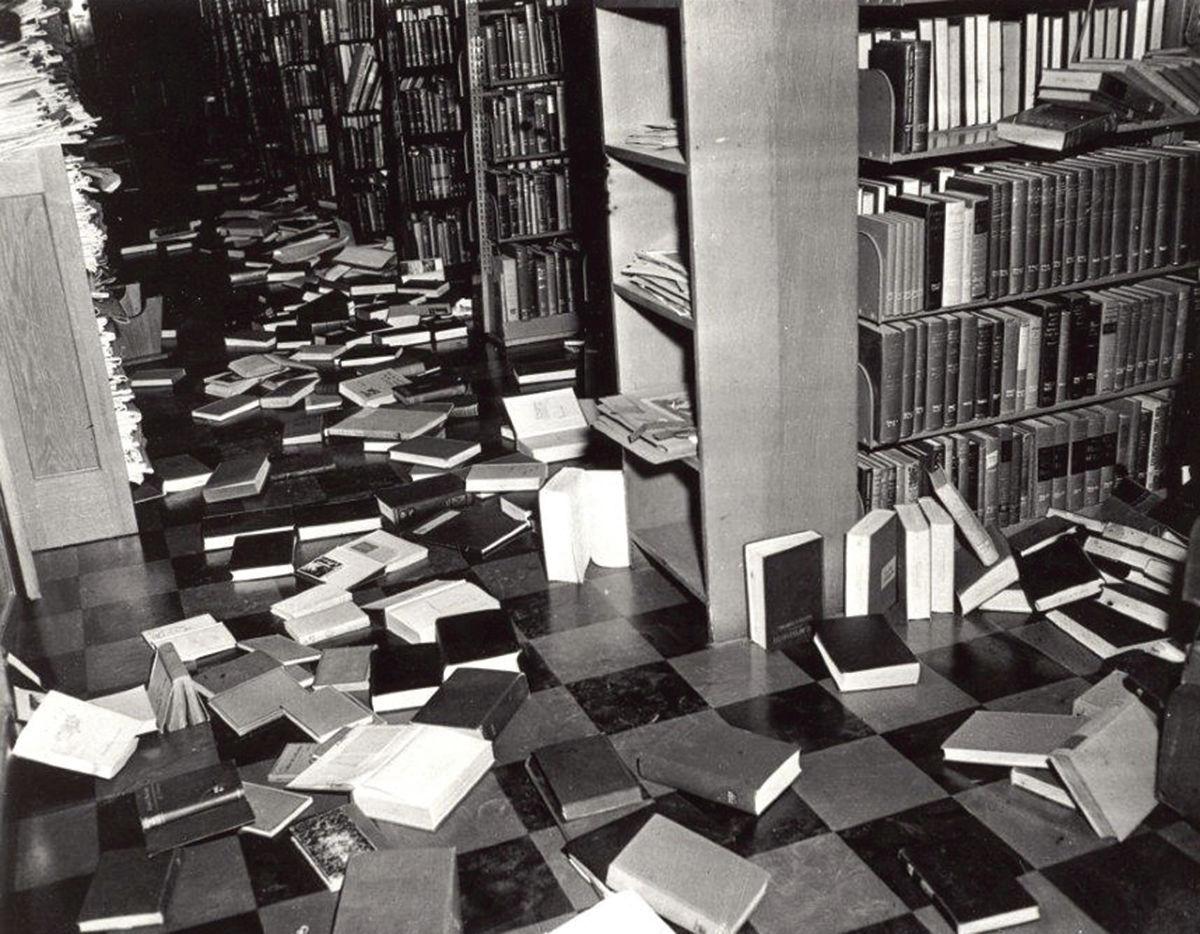 The Bakersfield College Library after the 1952 earthquake.

The 64-foot Beale Clock Tower stood at the corner of 17th Street and Chester Avenue for 48 years but, severely damaged by the 1952 earthquake, was demolished by city workers. The only parts to survive were the clock works, bell, iron spiral stairwell, balcony railings, and arch iron grillwork.

The Bakersfield College Library after the 1952 earthquake.

At Caliente, which lay on the upper end of the fault, normally dry Caliente Creek began to fill with water, and days later it was running at 25 cubic feet per second. Southwest of the fault, in Arvin, an early riser saw the surface of his field roll toward him like a wave on the sea, pass under his feet, and roll on.

Nearby, the shuddering earth caused buildings to fall, ignited an oil refinery, broke irrigation pipe, and toppled 30,000 colonies of bees. In Tehachapi, east of the fault, a school bus bounced off the ground, a parked police car skittered 70 feet sideways and dust rose from collapsed buildings.

Conditions weren't so terrible in Bakersfield. Although bricks had fallen on the streets, 90 school classrooms were rendered unusable, and the county courthouse showed new cracks, most of Bakersfield's buildings made it through the quake. Wickersham Jewelry's big display of fragile, expensive china was undisturbed.

Human dignity didn't fare so well, principally because on that hot night some Bakersfield residents were sleeping au naturel. One couple who fled their home suddenly realized they were standing outdoors completely naked. In another case, a woman emerged from her home wearing her purse and nothing more.

Over the following weeks, hundreds of minor temblors were felt, but people adjusted, and a wag even christened the town Quakersfield. Most residents remarked that if this shake was the big one everybody had expected, they were grateful it wasn't worse.

Merldee Crawford, then 16, recalled looking up at the ceiling.

"I saw the big chandelier over my head rocking back and forth. I prayed it wouldn't fall. The aisles were jammed. People did not know which way they were going or why."

The magnitude 7.3 quake lasted about 10 seconds, and it hit so strongly that, 100 miles away, five Fresno schools had to be closed. Two people in Bakersfield lost their lives: World War I veteran Pat Cozby in the Kern County Equipment Company building, and Edna Ledbetter, 26, in a collapse at Lerner's dress shop downtown. Scores of people in that vicinity were injured, and several escaped death by just seconds.

Mature buildings that came through the quake with little damage included the Sill Building, The Bakersfield Californian and the Fox Theater. But many less well-built ones were unable to withstand two strong earthquakes only weeks apart.

That long list included the Beale Clock Tower, the Chinese Joss House, City Hall, the Kern County Courthouse, the county jail and several churches. With 90 classrooms already damaged by the first quake, 103 more were lost in the second one.

Nearby, chimneys fell, glass broke, furniture moved and water tanks toppled. Over time, as buildings were systematically razed and replaced, downtown took on the generic appearance of most other 1950s valley towns.

Accounts of the quakes are plentiful online, but for a richer experience visit the earthquake collection of the McGuire Local History Room, Kern County Library. The photographs, videos and eyewitness accounts documenting the quakes are astonishing.

Gilbert Gia is a retired local teacher. He is past president of the Kern County Historical Society and serves on the boards of Children First, Friends of the Kern County Library and the Retired Teachers Association. He has researched and written 122 local history papers.

On anniversary of massive 1952 quake, state says to get insured

Sixty-five years ago Friday, Kern County residents were jolted awake by a 7.3-magnitude earthquake at 4:52 a.m. — one of the biggest temblors …