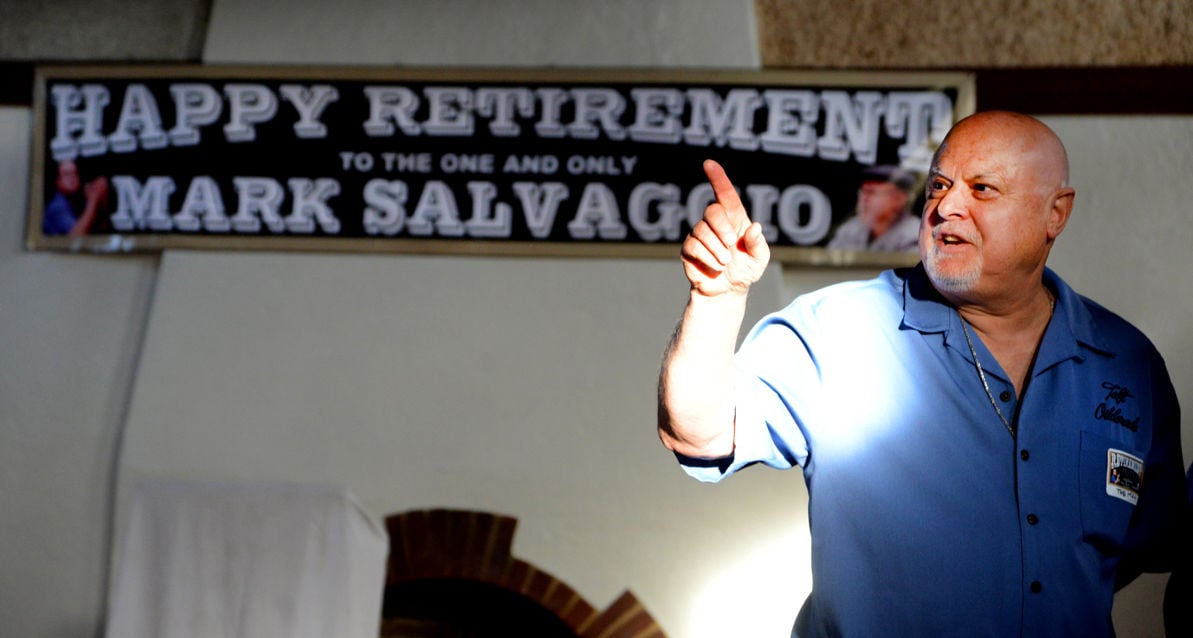 Some of his former Taft constituents threw a June 9 retirement party for Mark Salvaggio at their historic Petroleum Club. Salvaggio, a former five-term Bakersfield city councilman, had retired that day as a field representative for Kern County Supervisor David Couch. 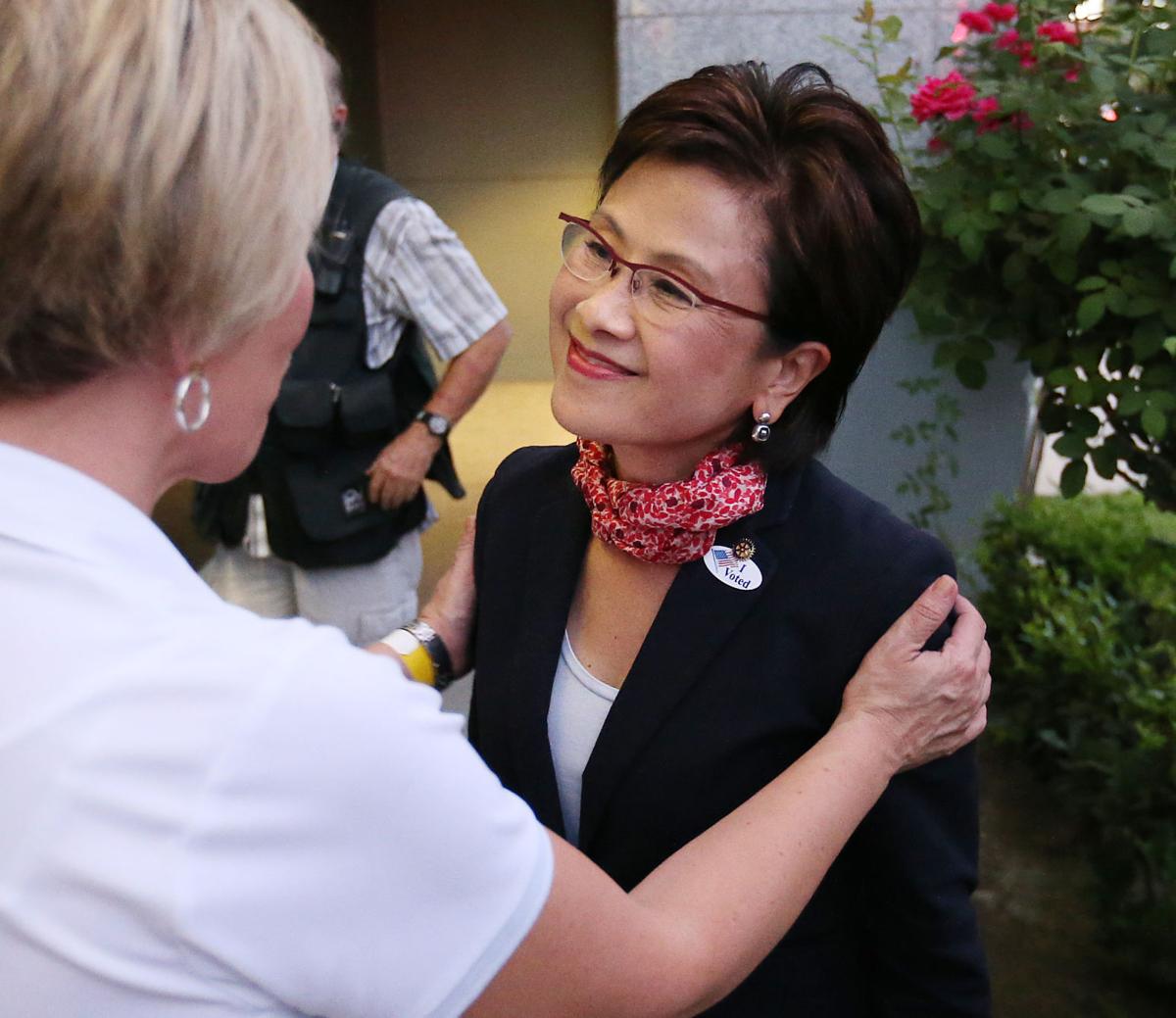 Bakersfield mayoral candidate Karen Goh is greeted by supporters Tuesday evening on election night as she makes her rounds around town meeting with constituents. 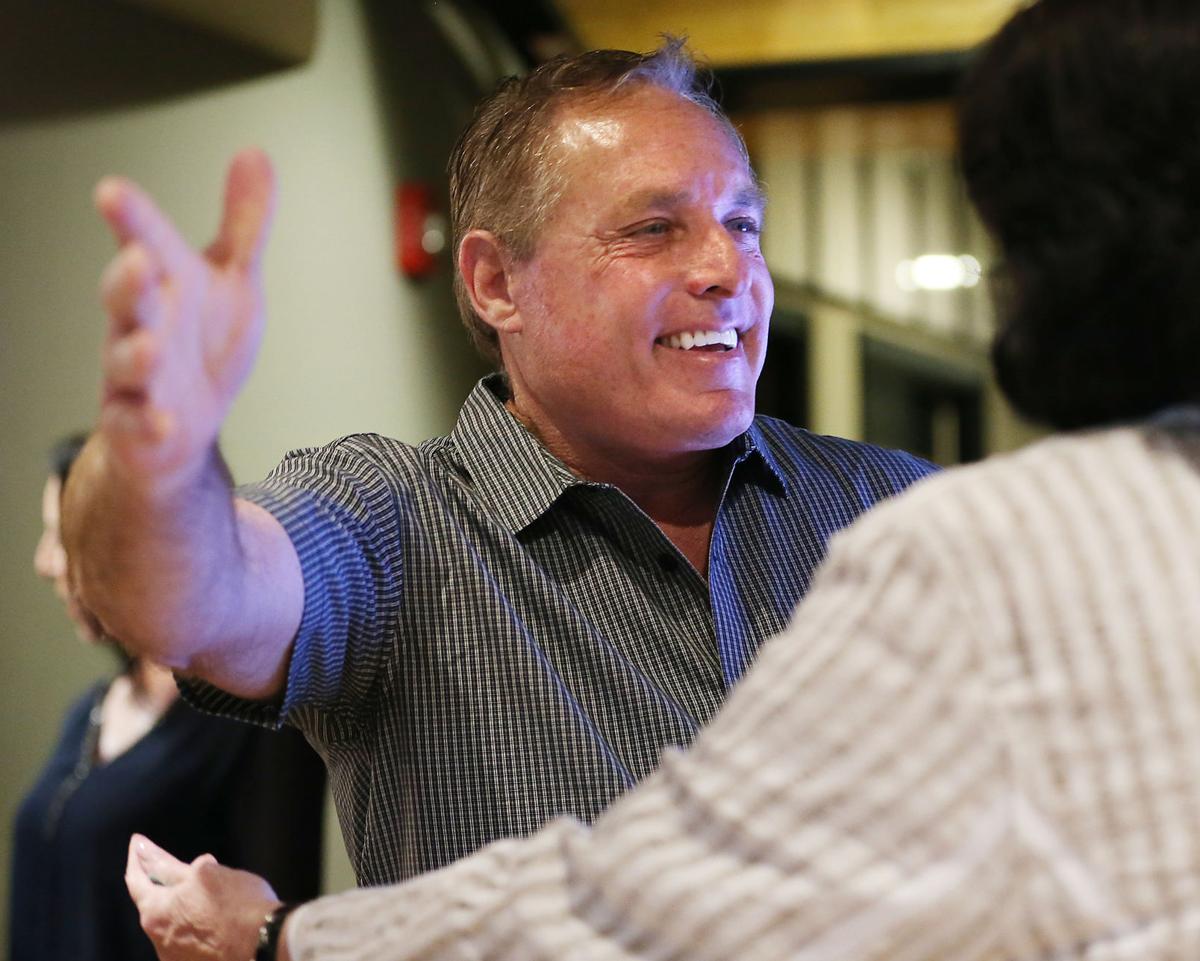 Some of his former Taft constituents threw a June 9 retirement party for Mark Salvaggio at their historic Petroleum Club. Salvaggio, a former five-term Bakersfield city councilman, had retired that day as a field representative for Kern County Supervisor David Couch.

Bakersfield mayoral candidate Karen Goh is greeted by supporters Tuesday evening on election night as she makes her rounds around town meeting with constituents.

Goh's Garden Pathways is a nonprofit that helps at-risk youth and families in crisis and assist families in enrolling for Obamacare. It is largely dependent on state and federal funds, having received $1.3 million over the past two years through the County of Kern and Kern High School District. Supervisor Mike Maggard, a Goh supporter, gave Garden Pathways $30,000 from his personal county discretionary fund.

Goh sits on a host of local boards, including the Kern Leadership Alliance, where she came to know political consulting icon Mark Abernathy, who ran her unsuccessful campaign for county supervisor in 2012.

Carter is a longtime local businessman. He was one of the top home builders in Bakersfield, also building several local churches. Recently, he co-founded the Bakersfield Music Hall of Fame. Carter has started 20 businesses over the past 40 years. He is a board member of the Bakersfield Homeless Center and Downtown Bakersfield Development Corporation. He is also active in the Keep Bakersfield Beautiful Committee.

Carter used Abernathy to run his 2014 campaign to win a seat on the Kern Community College Board of Trustees.

A new political twist has Abernathy representing Goh in her campaign for mayor, rather than Carter.

Grove, who in 2012 proclaimed to The Bakersfield Californian that she is an “Abernathy candidate,” is squarely behind Goh in the race for mayor. Grove is a member of Goh's Garden Pathways board of directors. She penned a lengthy letter of support of Goh in a puff piece that hit voter mailboxes the Friday before the primary election. I am told it was sent only to Republicans and independents.

The office of mayor is nonpartisan. Mayor Harvey Hall has served all the people of Bakersfield with distinction and without regard to partisan politics.

The mailer could backfire on Goh. Independents might feel alienated by a mailer clearly framed for partisan Republicans. Some Republicans may have been offended by it as well.

I received a telephone call from Goh a few months ago regarding her intention to run for mayor. I asked Goh why Abernathy was her campaign consultant again. I told her of my concerns regarding her last campaign, where she consistently refused to to talk in depth with media representatives, electing instead to only communicate through e-mails. This was a campaign tactic out of the Abernathy campaign playbook. It smacked of taking orders from Abernathy, a political power broker, as The Bakersfield Californian questioned in a column at the time.

I sensed Goh was ignoring my advice.

Goh's campaign for supervisor was plagued by a lack of transparency and pratfalls.

One of Goh's county part-time staffers, Sean Battle, had been paid by the County of Kern through an $87,000 contract it had with Battle's Christian nonprofit group Stop the Violence, where he was also paid $40,000 a year for his full-time work there. Questions were raised by The Bakersfield Californian about this conflict. Battle ended up resigning shortly thereafter, though he continued to head up Stop the Violence for a time. He then went to work for Goh at Garden Pathways. The new executive director of Stop the Violence could not keep this group going as board member after board member resigned. Stop the Violence went belly up. The chairman of the board was Josephate Jordan, who appeared in the same Goh campaign piece as Grove.

There was also the embarrassing dust up over whether highly respected Monsignor Craig Harrison had given Goh permission to use his name as a public supporter in a campaign piece. Harrison publicly denied granting such permission. Goh responded saying Harrison had told her by phone that he would sign a letter of support. This "he said, she said" incident did no one any good.

Against this back drop, the loss of Abernathy as a political consultant posed a serious problem for Carter. Carter needed a professional to manage his campaign. Recently, Carter retained an experienced political consultant Joel Olsson. Abernathy, although up in years now, is still a skilled political strategist. He is a talented, calculating campaign operative who knows how to get down into the mud and sling it. It will be interesting to see if Goh takes the high road in her campaign against Carter for mayor.

In 1992, Abernathy ran the mayoral campaign of Bob Price, the former Bakersfield police chief. His opponent, Ethel Landers, a popular community figure, was the early favorite to win.

Landers placed first in the primary in a field of five candidates. Price overtook Landers to defeat her in the general election, garnering 52.8 percent of the vote. Landers did not have the political stamina to withstand Mark Abernathy's well-oiled political machine.

Abernathy sent out a mailer carrying first class postage to Democratic women during the waning hours of the race, painting Landers as anti-abortion rights. It was a slick political machination designed to procure Democratic women to vote against Landers even though Price was also anti-abortion rights. This campaign ploy was designed to chip away at Landers' support among women.

The month following Price's victory, Abernathy penned a controversial op ed published in The Bakersfield Californian. Abernathy wrote: "…We allowed the forces of the Radical Religious Right to take control of our National GOP Convention, reversing our long-held pro-choice position … with calls for a "cultural war … a religious war ..."

Abernathy has since then embraced an anti-abortion position in keeping with "the prevailing political winds and base solidification to protect his political flank," as a Californian editorial put it. Abernathy realized he needed to ensure his monopoly on political consulting in Kern County. His political party had increasingly become conservative.

Carter's naivete in being previously associated with Abernathy has surely given way to some stark realizations about how dark the world of politics can be.

Based on my conversations with Carter, I doubt he has any Caligulan malice towards Abernathy. He has vowed to run a campaign with honor.