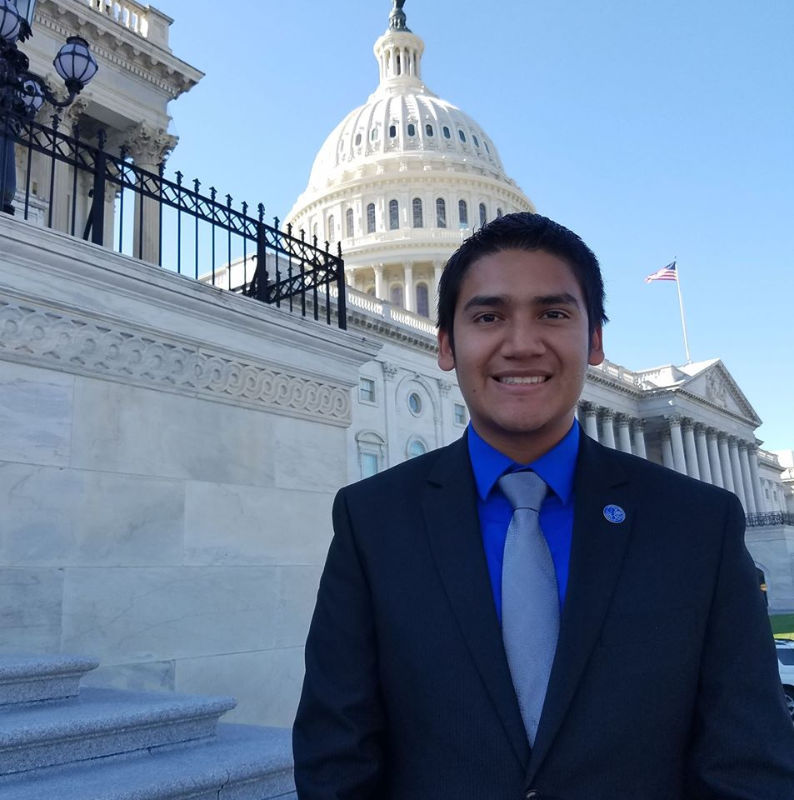 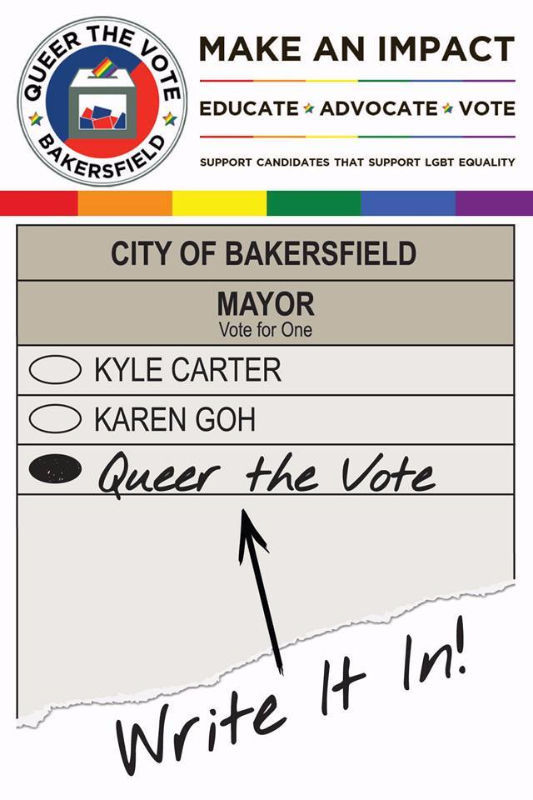 As Nov. 8 draws closer, many Bakersfield residents are wondering who we should elect to represent our great city as mayor.

Karen Goh and Kyle Carter both have strong roots in Bakersfield and I applaud them both for their respective accomplishments. However, both of these candidates have failed to fully and openly embrace the LGBTQ community in Kern.

That’s why, this election cycle, residents of Bakersfield should stand in solidarity with our LGBTQ community, and not support either candidate. Instead, fill in the bubble underneath both of their names and write in:

Queer The Vote’s goal is to promote diversity, embrace individuality and advocate for a more accepting community. Our ultimate objective is to convey to all candidates, current and future, that the Bakersfield LGBTQ population, their families and allies, are a constituency and we demand representation at all levels of government.

The year is 2016, and Bakersfield deserves better. It’s been more than a year since the Supreme Court ruled that Americans have a right to marry whomever they love. Bakersfield deserves a mayor who is not afraid of embracing a community that simply wants to feel welcomed and secure in a place they call home.

Carter responded by saying he could not see himself participating in a gay pride parade because it would create disunity within the community. “Either way you’re going to make one side mad,” he said.

Carter also stated, “I see the role of mayor very differently than what Mayor Hall has … I’d like to focus on other issues like jobs, safety and homelessness.” Defending his answer, Carter said, “I have neighbors and close friends who are LGBTQ and they are wonderful people.”

Goh has yet to respond, but she did answer a similar question on KGET’s mayoral debate, where she talked about people’s constitutional rights, and her personal, strong-rooted belief in the Bible. Again, not giving a direct answer.

Silence can stand no more. The LGBTQ community has faced enough discrimination through a very traumatic year. The tragedy that struck the Pulse nightclub in Florida should remind us that we should teach tolerance and acceptance. It should remind us that we should not stand for homophobia. It reminds us that the LGBTQ community should be welcomed and loved and we should not be debating whether or not an elected representative should be willing to endorse their full support.

The LGBTQ community in Kern County has dealt with the tragic murder of Jasmine Sierra, a transgender woman right here in Bakersfield — a murder that has still yet to be solved.

The LGBTQ community has faced discrimination from people like KHSD trustee Chad Vegas and his vicious attacks on transgender students.

It is not enough to simply remain silent.

If we look back at all the work that Mayor Hall has accomplished, one example stands out. In 2004, Mayor Hall had the political courage to stand alongside the LGBTQ community by issuing a proclamation declaring a Gay Pride Day. Unfortunately he withdrew this proclamation.

Here we stand 12 years later with two candidates who have taken the misguided position of neutrality and silence. “It’s just politics” — I get it.

What I also get, though, is the constant persecution that the LGBTQ community faces on a daily basis. What I also get is that if we had a mayor who was willing to stand up and show support, love and compassion, he or she could inspire and set an example for the rest of — not only Bakersfield, but all of Kern — to follow.

As Desmond Tutu put it, “If you are neutral in situations of injustice, you have chosen the side of the oppressor.”

I am an ally. I stand with our LGBTQ community. I believe that no person should face discrimination based upon the person they love, or their gender identity. I choose love.

For all the reasons above, I will “Queer The Vote” for mayor of Bakersfield this year, and I encourage you to do the same.

The Supreme Court chose love. Will you?