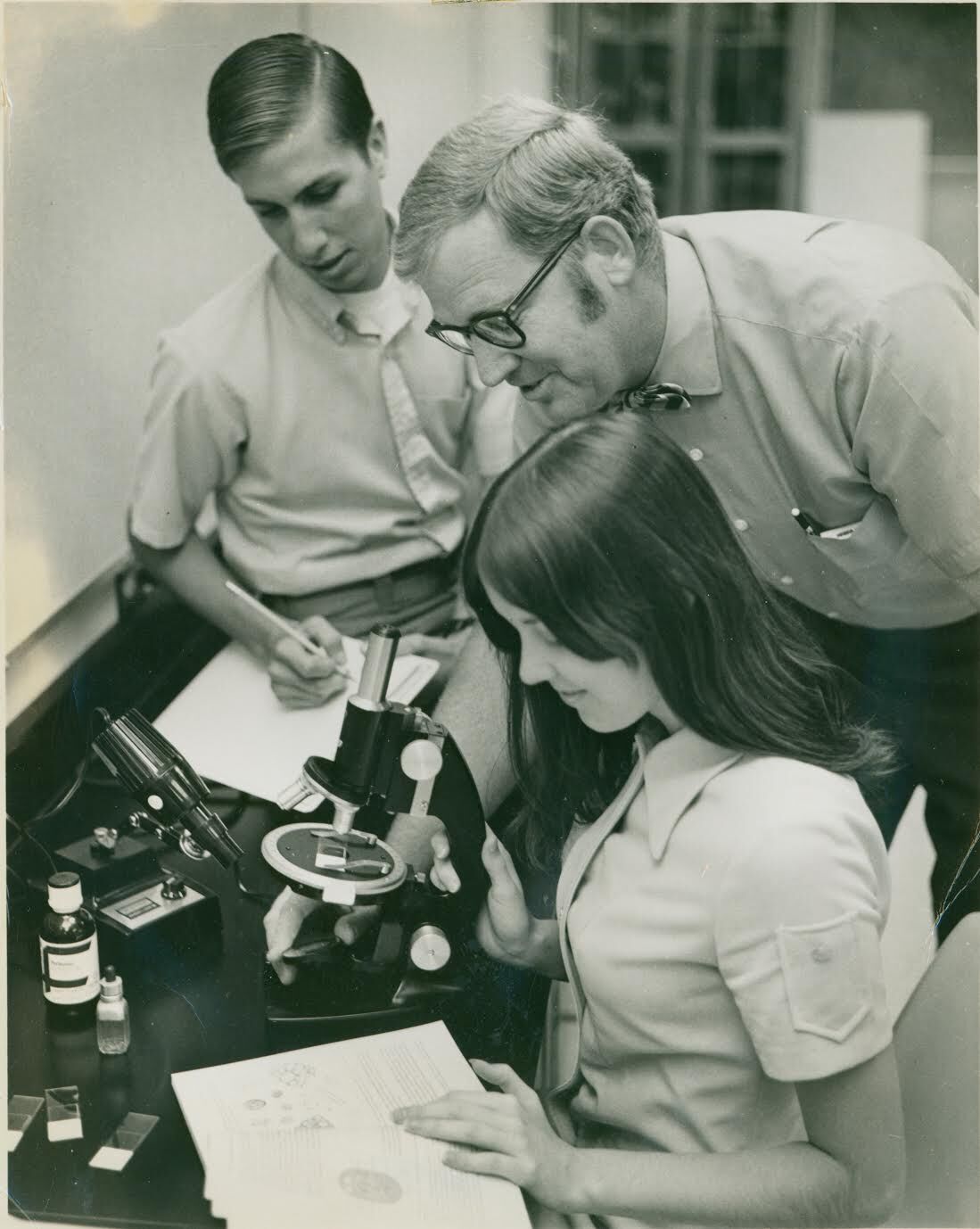 In this archive photo from Cal State Bakersfield, a professor helps a student use a microscope. 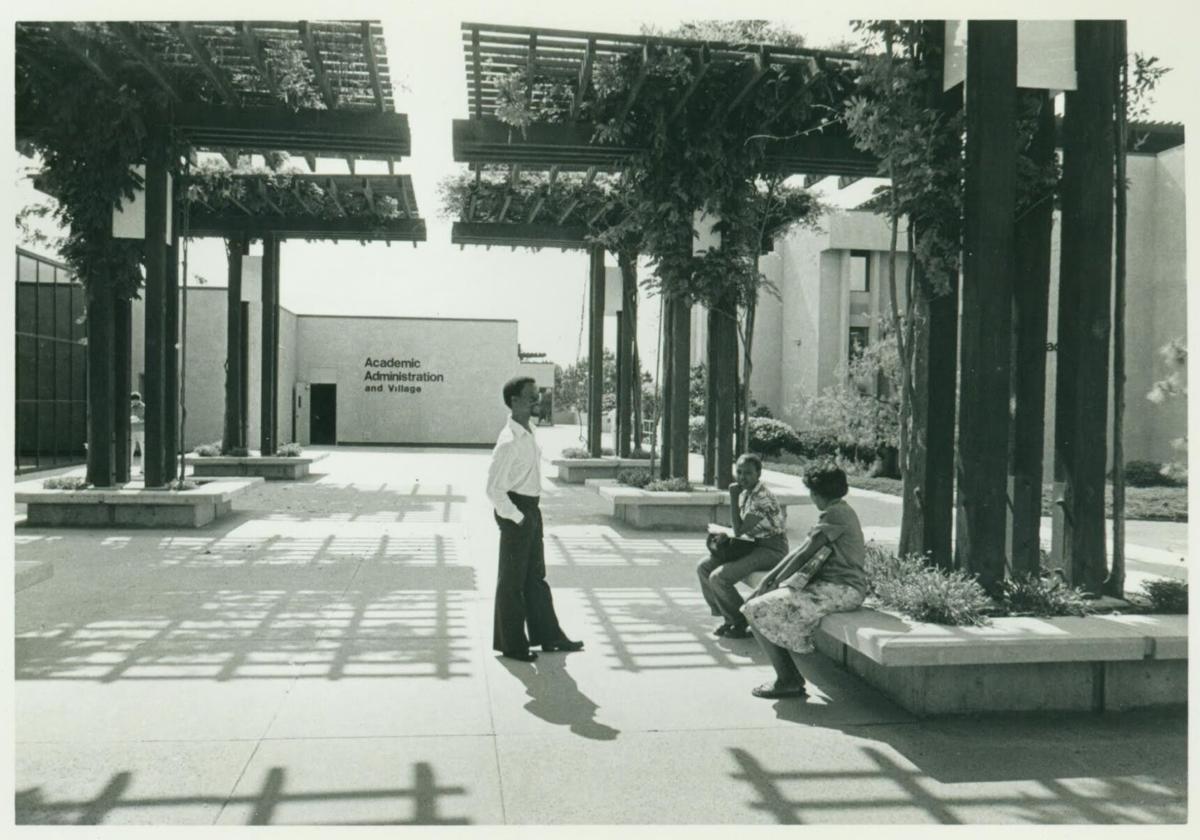 In this archive photo from Cal State Bakersfield, students find some time to chat on campus. 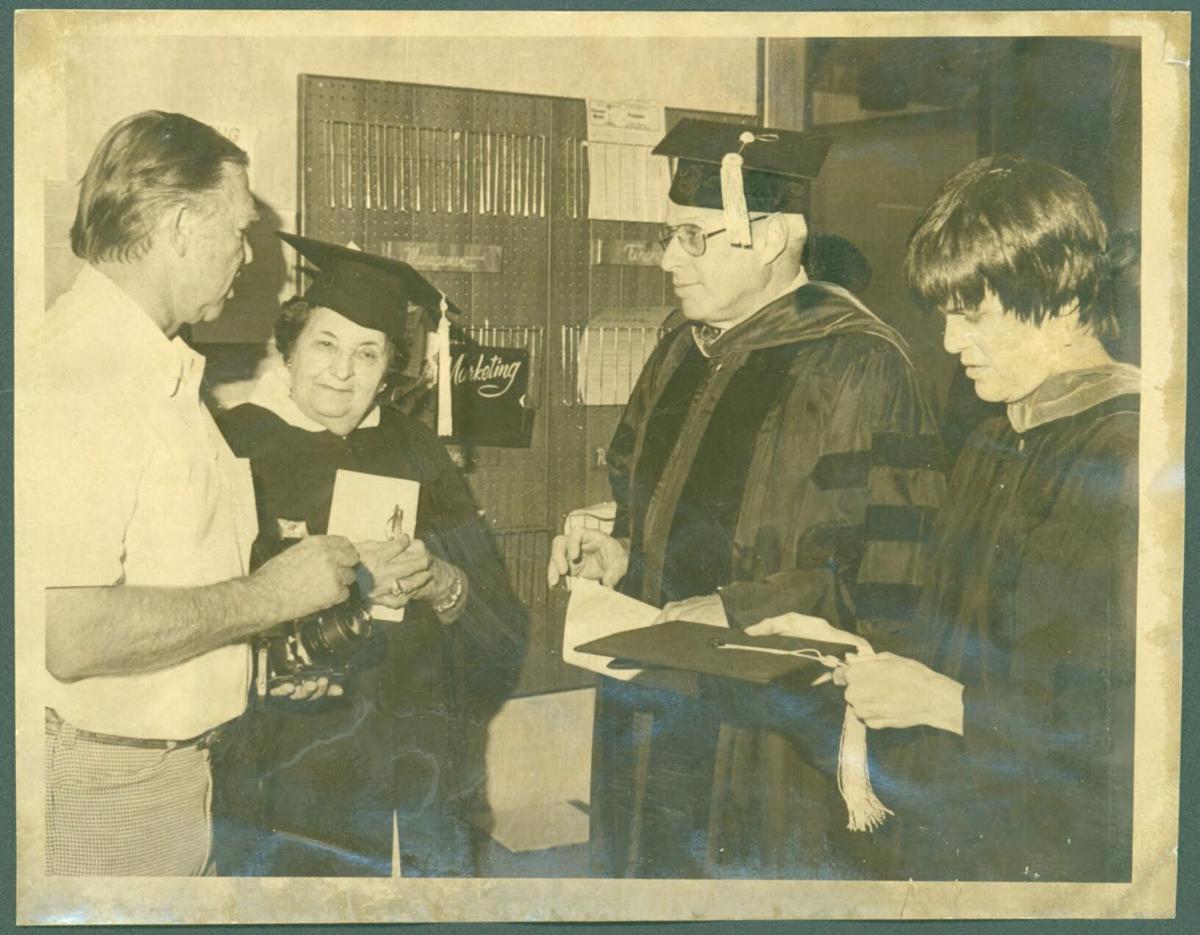 Cal State Bakersfield is celebrating its 50th birthday with the release of “Rising: The First Fifty Years at California State University, Bakersfield.” 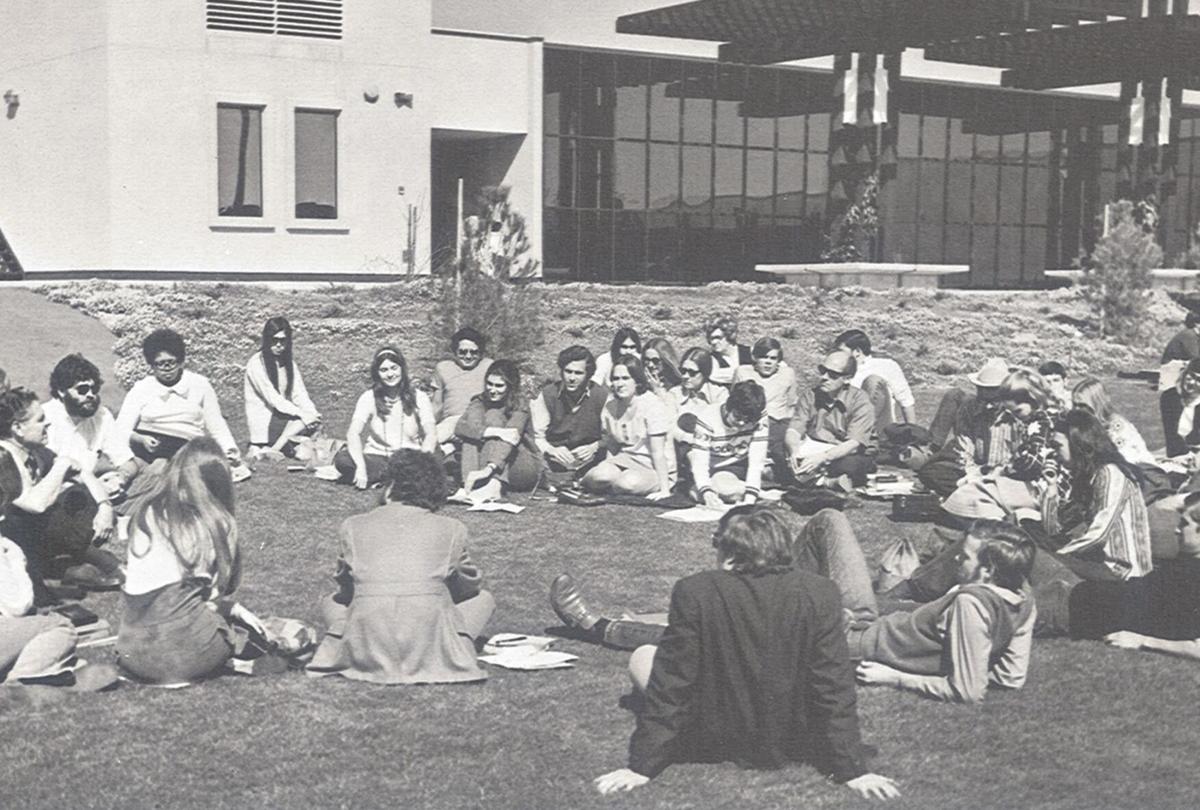 In this archive photo from Cal State Bakersfield, students gather outside on campus. 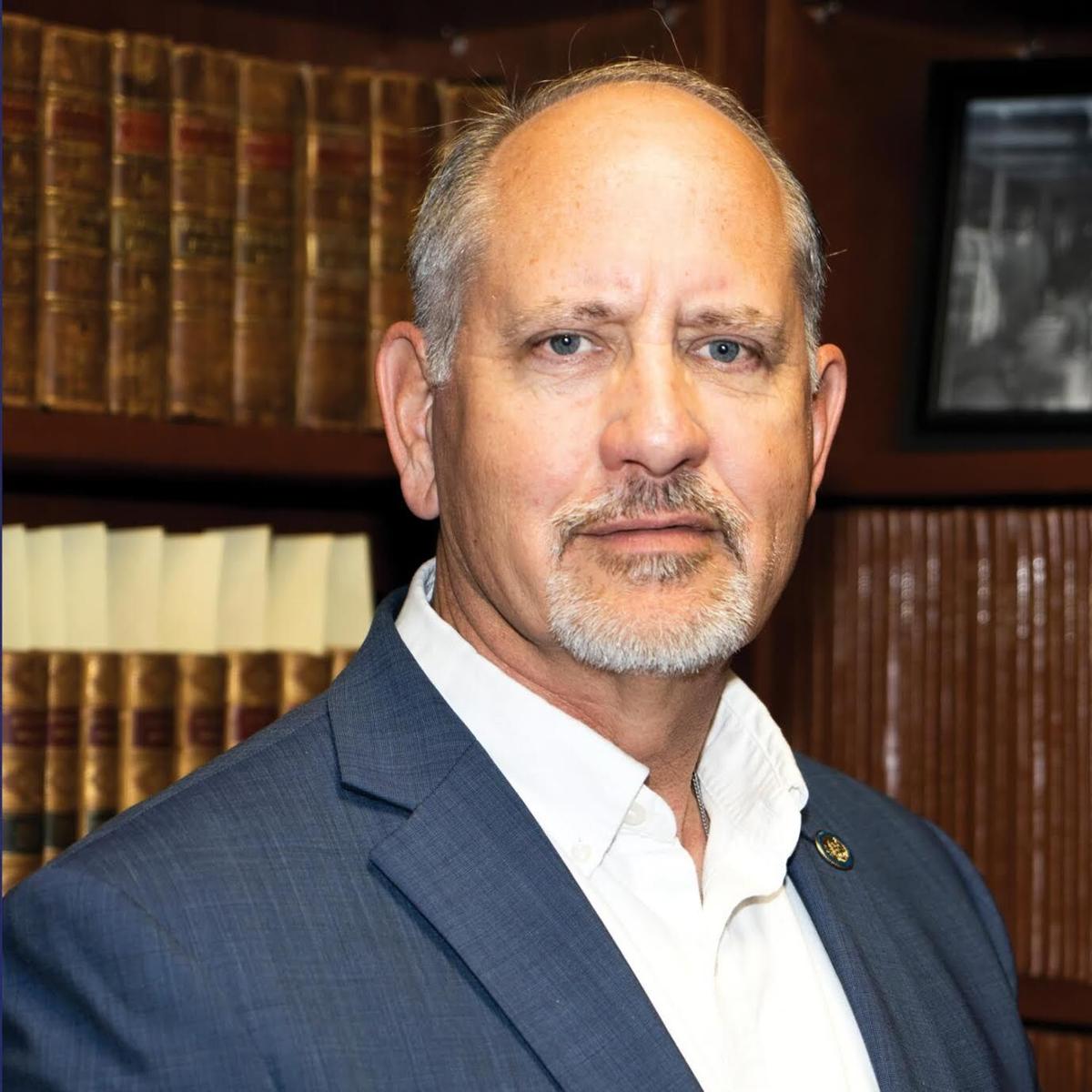 In this archive photo from Cal State Bakersfield, a professor helps a student use a microscope.

In this archive photo from Cal State Bakersfield, students find some time to chat on campus.

Cal State Bakersfield is celebrating its 50th birthday with the release of “Rising: The First Fifty Years at California State University, Bakersfield.”

In this archive photo from Cal State Bakersfield, students gather outside on campus.

Former California Governor and Chief U.S. Supreme Court Justice Earl Warren strode to the podium on June 10, 1973, and told the graduating seniors at Cal State Bakersfield that the nation was in a troubled state. A giant of 20th century politics and jurisprudence and a Bakersfield High graduate, Warren urged the small group of students waiting for their diplomas under the June sun to reject the frustration and lethargy that gripped the country in that post-Vietnam era. Instead, he told them, “accept the challenge of the future.”

Little did Warren know that three years earlier, the school’s early faculty and administration, led by ex-Marine fighter pilot and college president Paul Romberg, had already accepted that challenge. They had overcome obstacles and built a four-year college that applied experimental teaching strategies and new ideas. The college would blossom into a university that would alter the region in ways Romberg probably never imagined.

In October 1970, on a campus surrounded by farm fields, in classrooms that still smelled of fresh paint, 920 students launched a school that would entrench itself as a driver of both the region’s economy and its culture.

CSUB alumnus Olivia R. Garcia — a former journalist for The Bakersfield Californian and now a professor of history — has written the text for a coffee table book that documents the 50-year history of the university. “Rising: The First Fifty Years at California State University, Bakersfield” is a photo-laden stroll through CSUB’s life from its humble beginnings to its current dynamic presence in the southern San Joaquin Valley. Also contributing chapters to the book are alumni historians Julie Plata and Francisco J. Llamas.

CSUB was the 20th campus to be constructed in the CSU system and it was the product of hard legislative work by two Bakersfield-based legislators: State Sen. Walter Stiern and Assemblywoman Dorothy Donahoe. Donahoe’s story is an inspirational one. Despite walking with a limp caused by childhood polio and suffering from regular bouts of severe asthma, Donahoe did not let ill health handicap her. Instead, it was a motivation that pushed this former Bakersfield High School registrar toward success. She threw her hat into the political ring, won the Democratic nomination for state Assembly and spent the remainder of her life fighting for higher education. Teaming with Sen. Stiern, a local veterinarian, whose efforts to get a college established in the Southern San Joaquin Valley had been ongoing since 1949, the pair established California’s first master plan for higher education, which ensured college accessibility for all. Although Donahoe died young and never saw the outcome of her efforts, she and Stiern led the fight for the four-year college in Kern County that would become CSUB.

The land scramble that followed the legislation ultimately led to the construction of the current Bakersfield campus. Constructing the university on land donated by the Kern County Land Company, its placement fed development of suburban housing, office space, and retail stores in the southwest part of the city.

The CSUB presidents all branded CSUB with their unique vision, sometimes in juxtaposition to one another. Under Romberg, educational philosophy was influenced by the 1970s zeitgeist of self-directed learning and a leveling of classroom authority, with a goal toward establishing a Socratic “academic village” where traditional classroom roles were upended. The 21-year presidency of Tomas Arciniega saw a campus that intentionally aimed to attract students from the local area, especially those who had no experience with higher education or who were from disenfranchised groups. Under Arciniega’s presidency, CSUB established a satellite campus in Lancaster and the student population grew substantially.

Horace Mitchell, whose presidency spanned 14 years, ending with his retirement in 2018, saw the campus rise to national prominence, as new construction sprouted, a new engineering program blossomed, athletics moved to NCAA Division I and the school was noted on many important national rating lists as a place to get a good, reasonably priced education that moved its students forward economically.

Current president Lynnette Zelezny began her journey as the campus leader in 2018 and has brought her dynamism to a long list of goals, which includes increasing enrollment, raising the graduation rate and deepening our relationship with the communities we serve.

“Rising: The First Fifty Years at California State University, Bakersfield” tells the story of a tough little college that grew up overcoming hardship to become a beacon of academic and economic opportunity. Like the people of the southern valley, where it was established, CSUB’s story is one of resilience and character.

Available for purchase at http://bit.ly/CSUB50thStore

Virtual conversation with the authors

What: A moderated discussion and Q&A

To join: Visit https://www.csub.edu/50/events and scroll down to the webinar button