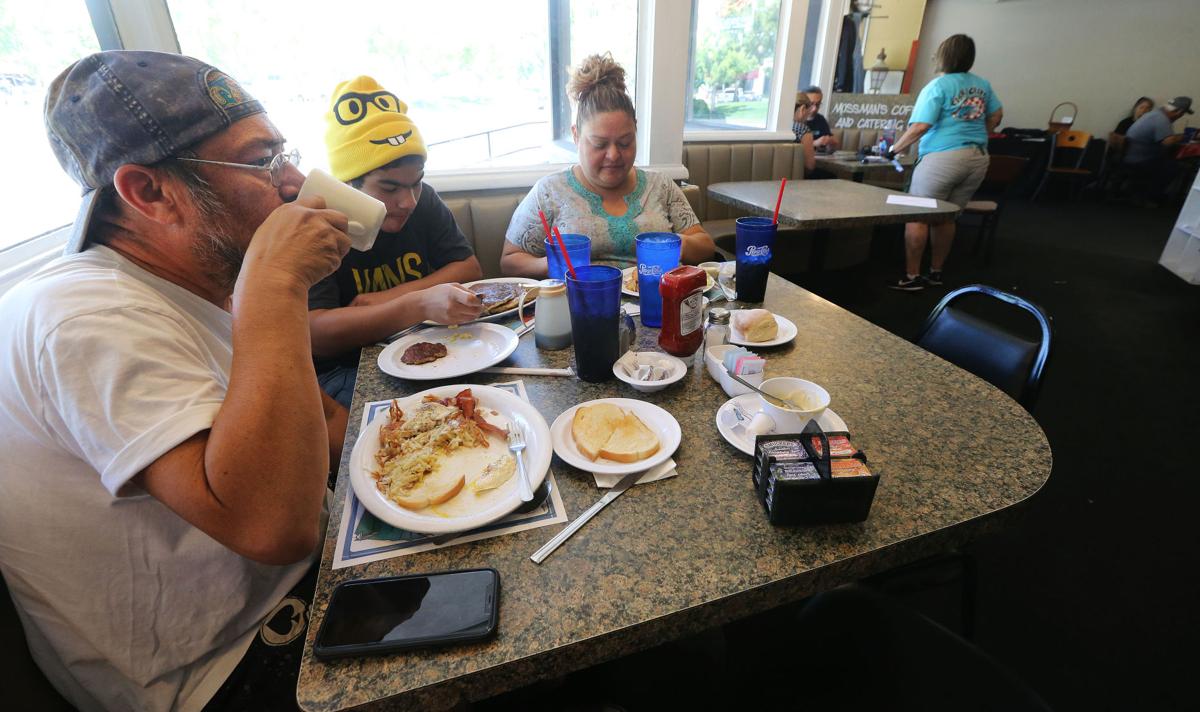 Ricardo Juarez, Jonathan Valdez and Yvette Reyes enjoy their meal at Mossman's Westchester Coffee Shop Tuesday afternoon. The restaurant has opened its doors back up to dine-in customers with limited seating. 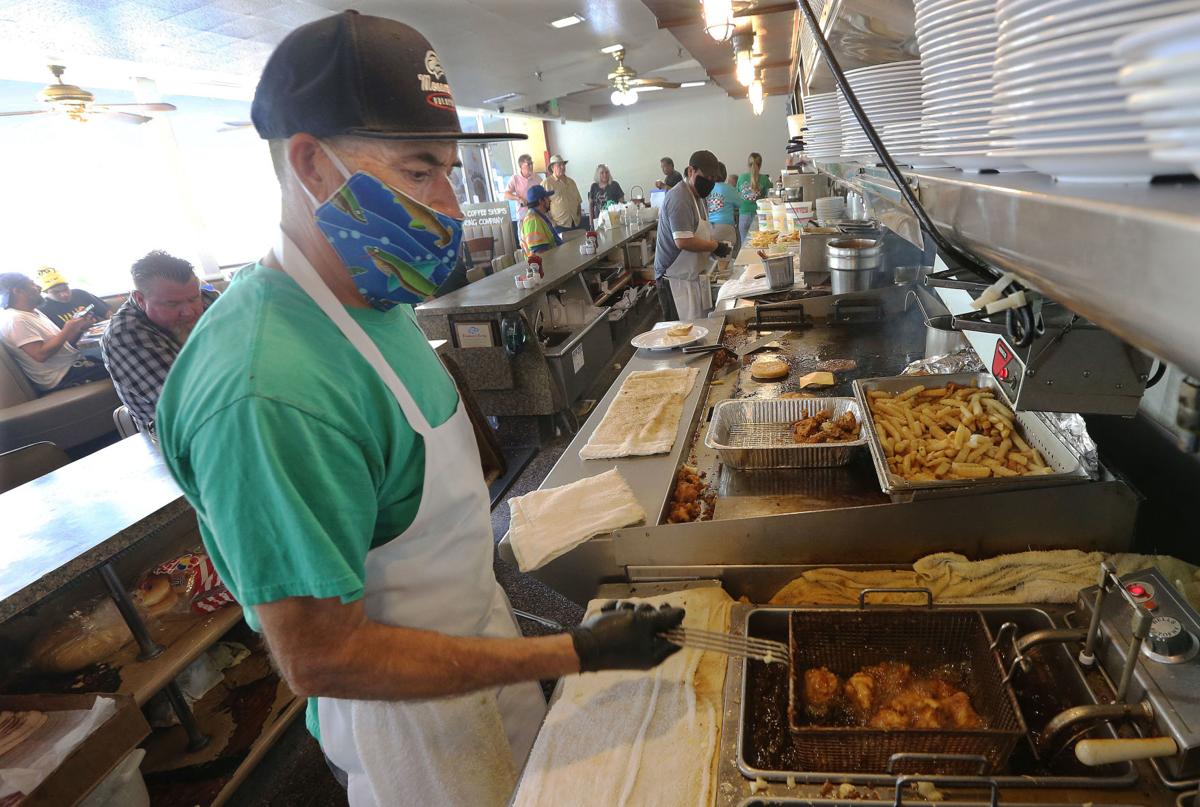 Ricardo Juarez, Jonathan Valdez and Yvette Reyes enjoy their meal at Mossman's Westchester Coffee Shop Tuesday afternoon. The restaurant has opened its doors back up to dine-in customers with limited seating.

But some things were back to normal Monday and Tuesday.

"When I came through today and saw those two people sitting at the counter, I said, 'OK, we’re getting back and it looks like home again now,'" he said.

The longtime Bakersfield eatery began welcoming dine-in customers Monday morning, but with limited seating and safety measures in place. Every other table is marked with an "X," servers and cooks are wearing masks and gloves, condiments are wiped after customer use and sanitation is ramped up.

About 20 people were dining at around 11 a.m. Tuesday, all distanced from one another. No one was observed wearing a mask or gloves, and server Lissa Dowdy said she only saw two with masks on so far that day.

The decision to open back up to diners, just days after the Kern County Public Health Services Department announced that a local health order issued April 2 was rescinded, had several layers to it. Revenue through curbside pickup and carryout options had dropped by 75 percent to 80 percent while costs could only be cut by about 25 percent to 50 percent. Mossman also had to take into consideration what his customers and staff members wanted.

The crew at the 1819 30th St. location was ready to return, while the 3610 Wible Road one is preparing to open Monday. "I've missed talking to people. I was totally ready for this," said Dowdy.

"I feel more than comfortable being here," said Brenda Alexander, who was dining with her son, Brian, Tuesday morning. The two have been coming to Mossman's for years and jumped at the opportunity to get a fresh batch of fish and chips. "Hopefully other people come out and they're not afraid to come out."

Other businesses, such as Spencer's Cafe and Moo Creamery, also have welcomed back dine-in customers to some capacity this week. But one question remains: Are restaurants allowed to reopen to the public now for in-house dining?

It doesn't seem like it, according to state and local officials.

During Gov. Gavin Newsom's news conference Monday, he said some additional businesses would be allowed to open Friday with certain restrictions. However, that phase does not include reopening seated dine-in restaurants.

When asked if the Kern County Public Health Services Department has been in contact with these establishments or if dine-in service is allowed, spokeswoman Michelle Corson wrote in an email Tuesday: "The County will continue to provide education and awareness of the governor’s orders to any businesses who become non-compliant. It is our hope that our education will encourage the business to comply."

Mossman said: "I don’t want to do anything against the health department. I want to work together with them."

Jessica Pounds, the owner of Moo Creamery, said every business owner she has spoken with has been "playing it by ear." She welcomed back dine-in customers Monday, and said "one gentleman was about to cry" when he heard the news that he could sit down and eat.

Moo Creamery also is distancing tables and guests from one another, having staff wear personal protective equipment and giving cooks their own stations.

Pounds is trying to be responsible about opening back up, while also fighting for her business. "We’re still paying full rent, taxes, workers’ comp and we’re trying to keep as many people employed as possible, so it's been hard."

Spencer's Cafe also surprised longtime customers Tuesday morning by allowing them to sit down and enjoy breakfast or lunch at its three locations. Manager Lisa Trino at the southwest spot said 12 out of 25 tables are being utilized and guests are not required to wear masks. Staff, however, are wearing protective equipment.

"They want to come back in, they don't want to be home," she explained, adding it's been hard to not check on elderly individuals and see if they're doing OK.

Local restaurants seating diners do so against state orders

Local restaurants that opened for dine-in customers this week did so in opposition to the governor's orders, but local authorities say they wo…