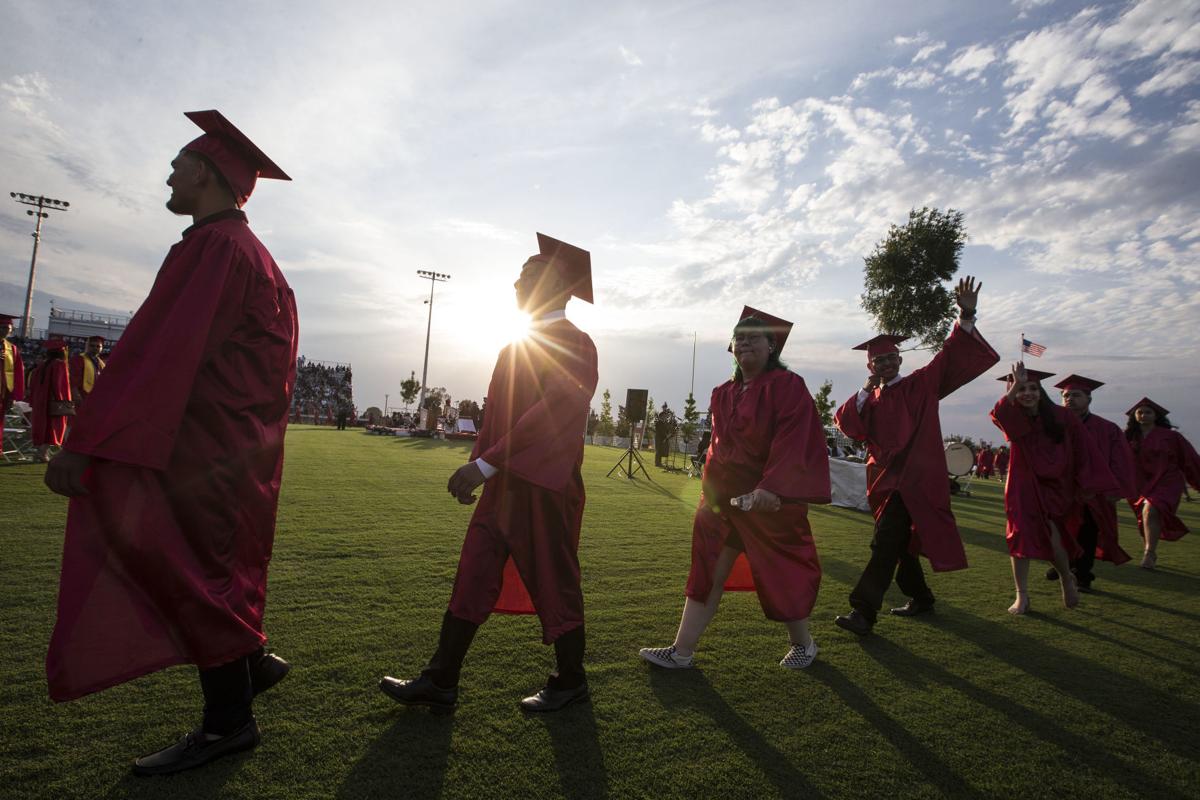 In this file photo, Arvin High seniors enter Frank Barle Stadium during the processional at the Arvin High commencement ceremony in 2019. 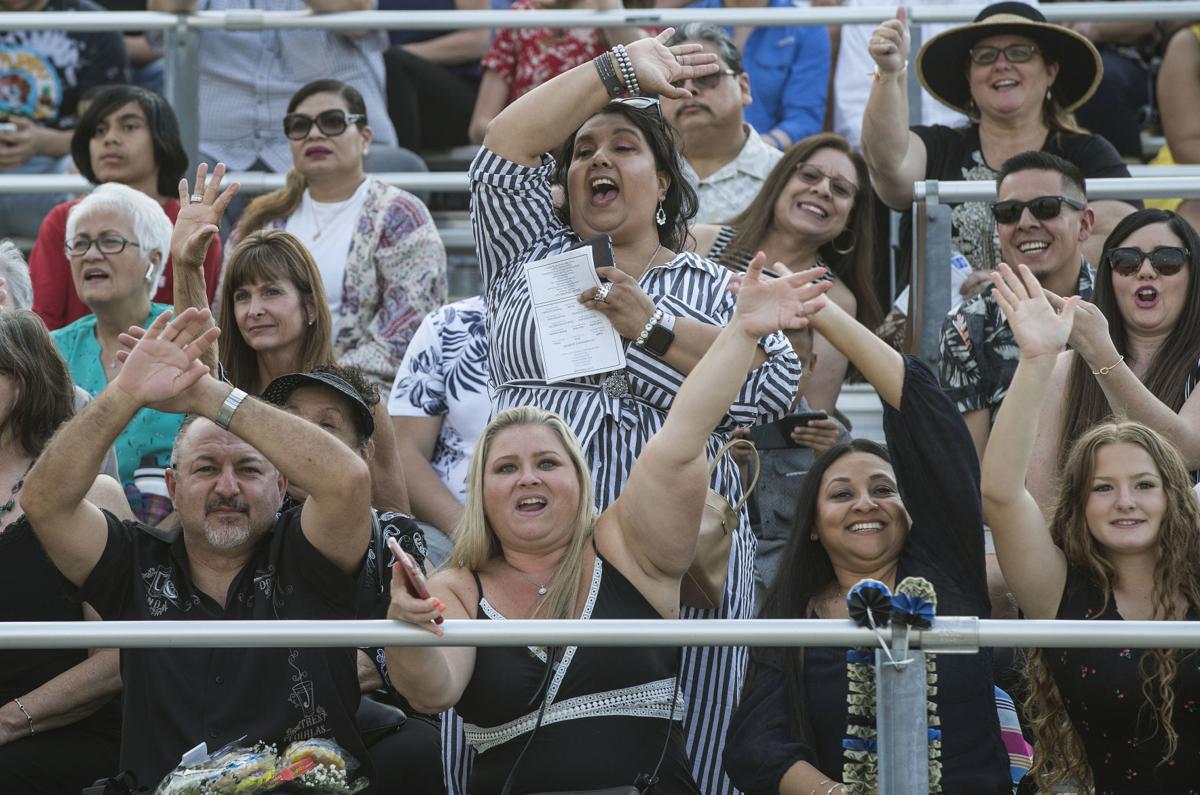 In this file photo, members of Frontier student Christian Gonzalez's family cheer when they spot him during the processional at the Frontier High School graduation ceremony in 2019. 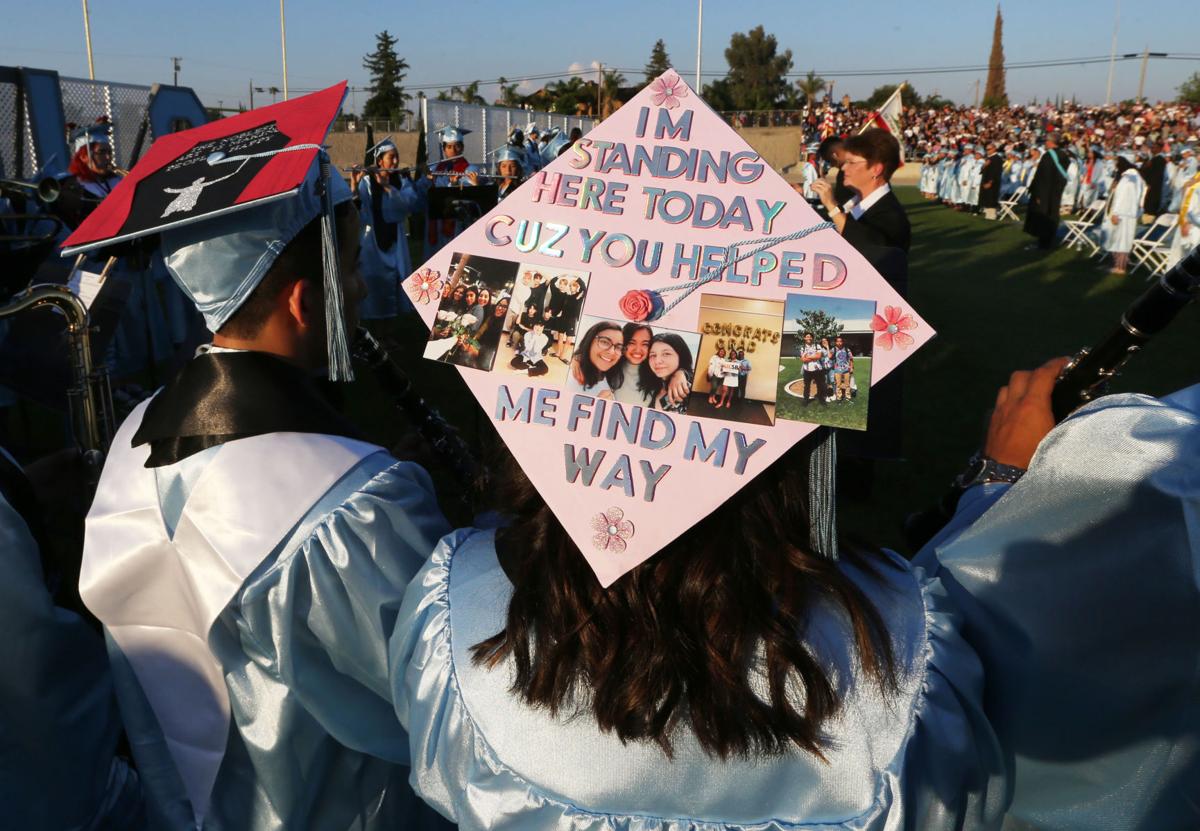 Unique decorated mortar boards were the norm at the South High School graduation in 2019. 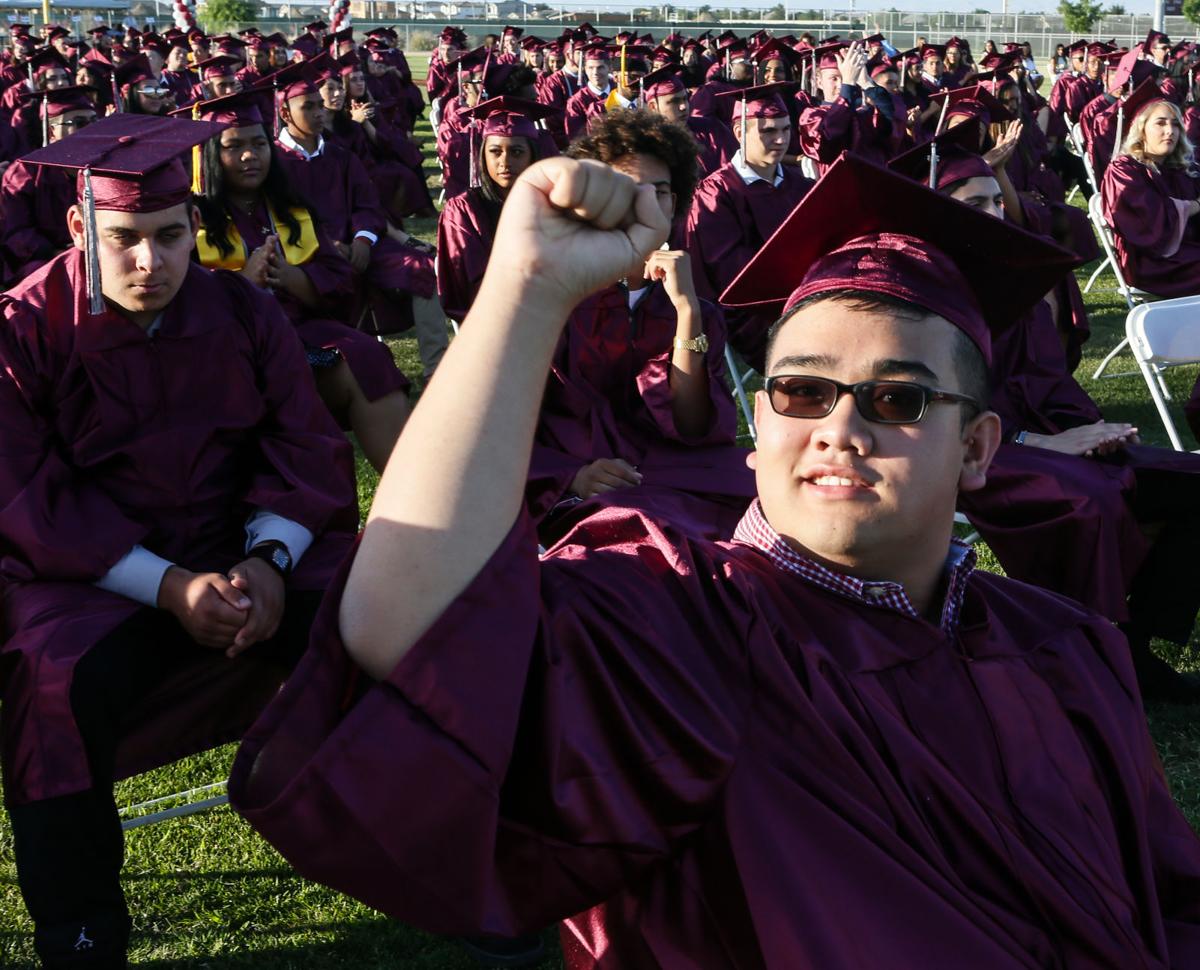 In this file photo, Justin Gabrillo gives thanks to his parents at the Independence High School graduation at Falcon Stadium in 2018.

In this file photo, Arvin High seniors enter Frank Barle Stadium during the processional at the Arvin High commencement ceremony in 2019.

In this file photo, members of Frontier student Christian Gonzalez's family cheer when they spot him during the processional at the Frontier High School graduation ceremony in 2019.

Unique decorated mortar boards were the norm at the South High School graduation in 2019.

In this file photo, Justin Gabrillo gives thanks to his parents at the Independence High School graduation at Falcon Stadium in 2018.

High school graduation is one of those moments you'll never forget.

Even after 27 years, Carrie Mosqueda still remembers standing on her high school's football field, dressed in her cap and gown, the nighttime temperature a sweltering 100 degrees in Southern California and bugs flying around all those sweaty seniors.

She didn't imagine her graduation going that way, but for her "it was the best thing ever."

When she watched her oldest child graduate from Highland High School, nothing prepared her for how emotional that day would ultimately be.

Now that her youngest son — who has maintained a 3.8 GPA, played football and trained throughout his four years at Highland — is getting ready to graduate as well, there's the possibility he won't experience that memorable, once-in-a-lifetime moment.

While school sporting events, competitions and other activities have been canceled due to the coronavirus, graduation remains up in the air. With this annual celebration drawing hundreds, if not thousands, of people into stands, there's the possibility that holding such large gatherings at the end of May and early June will be impossible.

And with parents and students unsatisfied with the idea of losing out on this big day, they're taking matters into their own hands.

Earlier this month, it was announced Catholic schools under the Diocese of Fresno, which includes Garces Memorial High School, will not hold traditional graduation ceremonies in the spring. Schools hope to hold a celebration in early summer.

Local public school districts are at different points in the planing process.

The Kern High School District, which figures to have 9,500 graduating students, said it is considering several options, such as postponing graduations until the summer or holding virtual ones, according to Erin Briscoe, public information officer.

The Taft Union High School District board of trustees will be discussing a virtual graduation ceremony at its meeting next week, as well as the possibility of postponing the traditional ceremony into the summer if the early June date is not feasible, according to Superintendent Blanca G. Cavazos. Around 200 seniors are expected to graduate.

"When it was suggested by our state superintendent to make the difficult decision to physically close schools for the rest of the school year, the graduating seniors and eighth-graders were immediately on my mind," MUSD Superintendent Aaron Resendez said. "They all deserve to finish their time at McFarland together, with their friends, family and teachers, following traditions and walking across the graduation stage like so many students before them."

Despite the uncertainty, students are still scheduled to pick up caps and gowns in the coming weeks.

For Parneet Sahota, an associated student body leader at Cesar E. Chavez High School in Delano, her walk across the stage would have been monumental.

An immigrant from India, she will be the first person in her family to graduate high school in the United States and go to college. Graduation on June 4, along with prom and other senior activities, would have made her accomplishment even more special. But with slim chances of the ceremony taking place, it makes it bittersweet.

"We've spent 12 to 13 years in school and we don’t get to walk the stage. This was supposed to be our one proud moment," she said.

Canceling graduation also means one less chance to be around friends before going to college. Abigail Resolme, a Bakersfield High School senior, said on the last physical day of school this year, she didn't get a chance to say goodbye to everyone she wanted. She thought she would return to enjoy events such as prom, grad night and senior sunset which would have given her those final precious moments.

And who can forget hearing "Pomp and Circumstance," making it all feel real. Liberty High School senior Kaitlynn West has performed at graduation each year and says not getting a chance to hear it performed for her own graduation would be "devastating."

A LOSS FOR PARENTS

Parents, too, are mourning now that their children's year has been cut short and the momentous day could be altered.

Tamyra Bell said she is "heartbroken" at the thought of not being able to celebrate the end of her son's senior year the way she wants, especially since he is her only child.

Garces Memorial High School announced the cancellation of several exciting activities and events in March, and for her son that has meant no track and field season or senior trip to the Bahamas. Seeing graduation on that same list was a hard to process.

"I’ve waited for this day his whole life," Bell said. "He wanted to walk across the stage ... it's ruined everything."

After hearing that several districts were looking into a virtual graduation, parents aren't convinced that's the best solution. Jennifer Resolme would rather wait until the summer for a BHS graduation ceremony for her daughter than watch a virtual one because "it seems very anticlimactic."

PLANS OF THEIR OWN

Rather than ending the year with little fanfare, students and parents are organizing celebrations of their own that would allow for social distancing while still spotlighting student achievement.

Independence High School parents have created a Facebook page to organize a car parade, which is currently set for May 30. After seeing teachers hold parades for students, Nikki McCullar thought that would be one way to honor grads.

"(We would) have our seniors stand in their front yards in their cap and gown and us parents, family members, community members and staff (would) drive by and honk and congratulate and hoot and holler for our kids," she explained. She also hopes to have families put signs and balloons on their front yards.

Organizers are trying to have as many parents and school staffers participate. Those interested in joining can visit the Independence High School - Bakersfield Class of 2020 Facebook page.

Sahota has teamed up with other high school seniors in California to form a virtual group called California Class of 2020. More than 250 student leaders are members, and for the last few weeks they have organized comedy nights, talent shows and karaoke events.

Though graduation might be difficult to tackle with so many high schools represented, she said the group will try to share videos and stories that highlight their accomplishments.

Even something like a parking lot graduation is better than no ceremony at all for Bell. She suggested Garces students should be placed 6 feet apart from each other, while family members remain in their vehicles.

Holding a fireworks show in lieu of a prom or senior night is another way to give students a boost, Mosqueda suggested.

It's not the end to a high school career that any administrator would have imagined, but Jason Garcia, superintendent of the Delano Joint Union High School District, said this year's class will be remembered for its "dedication and perseverance during these most challenging times."

"One thing I realized about this class of 2020 ... they were born during the time of Sept. 11. They came into the world during an epidemic, and they are graduating with a different one," McCullar said. "These kids will end up being resilient and stronger, and it will take a lot to shake them. ... At the end of the day, they will do great despite the state of the world."

KHSD board to consider status of graduations, grading system at Monday meeting

Through out the history of graduations, many students have had to miss theirs for one reason or another. It's a shame that this is happening right now. My granddaughter not only missed her prom, but now the status of her graduation is up in the air. I have a hard time mustering up a lot of sympathy though. It could be worse. She will get a diploma. She will finish what she's started, just not in the way she expected. I look at this as an excellent lesson in life. Congratulations Class of 2020. I'm sure most of you will go on to do exceptional things despite not going to grad night at Disneyland.

If your child's "one proud moment" is the graduation ceremony from high school, then good luck on their future. Neither one of my sons went through their high school, college, or medical school graduations. They seemed to manage fairly well in life without it.

Well said and I was going to comment something similar. The kids aren't emotional over the ceremony, they're just eager to get to the parties. It's the parents who make a big deal out of their kid's birthday party, graduation, whatever, because, I think, they feel if they don't, then they're bad parents. So it's insurance for them to overdo it, thereby ensuring they'll look like perfect parents.