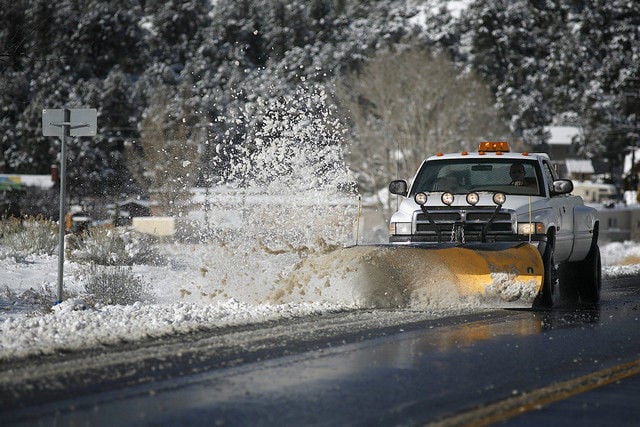 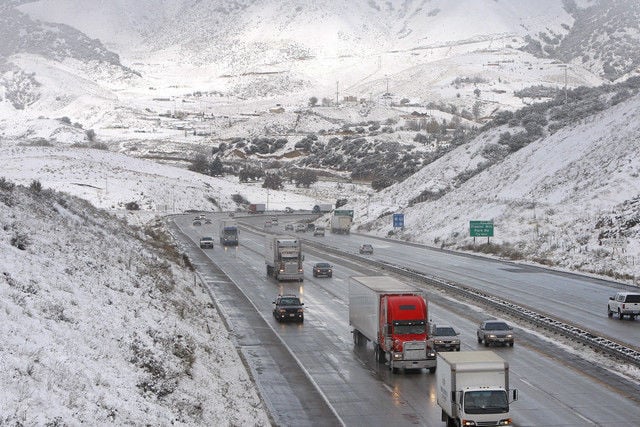 If you've ever wondered why the Grapevine seems to close at even the hint of a snowflake, look in the mirror — Californians can't drive in bad weather.

That's the official take on why we can't keep Interstate 5 open over the mountains in snowstorms, while other states that regularly get several feet per storm soldier through without cutting off major thoroughfares for days at a time.

“It's the traffic. It's the people,” said Lee Benjamin, a California Department of Transportation maintenance supervisor who has worked in Lebec for 28 years. “They won't slow down for anything.”

When snow drops on the road, Caltrans calls on the plows to scrape the powder. Sand and a de-icer compound are added to break it up.

But when the snow really picks up, as it did Tuesday, workers cannot keep up with cleaning the 40-mile from the Grapevine to Castaic.

The snow sticks to the road, and freezes. This causes fast drivers to go out of control and crash at the pump of a brake.

Wheel chains are not required through the Grapevine, and officials said it would be nearly impossible to regulate them. Californians also are unlikely to have snow tires.

California Highway Patrol makes the call to shut down.

“Once you start having vehicles spinning out, you have to make the decision to shut it down,” said Mark Ehly, highway patrol spokesman stationed in Fort Tejon.

At one point during this week's storm, Ehly said, while officers were escorting traffic through the icy roads, one driver kept passing an officer. He was pulled over, and was upset because he said he wasn't going above the speed limit.

The highway patrol has tried in the past to keep the road open as long as possible with horrendous results, Ehly said.

“Before you know it you have all four lanes of traffic blocked because of spun out vehicles,” Ehly said. “Then you have hundreds of vehicles stranded.”

Due to unsafe driving conditions Tuesday, the highway patrol decided to shut down portions of five different highways.

The closures left only a seven-hour route from Los Angeles to Bakersfield. It was a rare event that surprised even veteran roadway enforcers.

Certainly snow drenched New York doesn't have this problem on their roadways, right?

No way, said Skip Carrier, spokesman for the New York State Department of Transportation. Places with winter snowfall as the norm have to be prepared, he said.

There, drivers with snow tires are wary of maneuvering on icy roads. Road staff are ready to battle the snow as it falls, with salt for example. And plows are continuously out on the roadways.

Only during extreme blizzards, known in the past to drop up to seven feet of snow in a sitting, do major highways get shut down.

“We deal with this as a consequence every winter,” Carrier said. “When we have snow events, we have to make sure roadways are passable. That is all part of life here.”

So too does Colorado Department of Transportation. But when a large blizzard hits there, nothing can be done about roadways, said Stacey Stegman, spokeswoman for the department.

Nearly every year, major thoroughfare Interstate 70 is closed due to snow. It's used to transport freight, and leads to major recreational areas, much like I-5.

Department staff can’t keep up with snowfall, and driving conditions get too unsafe, no matter how prepared drivers are, she said.

“It paralyzes our state when it happens, but it's pretty much impossible to prevent,” Stegman said.

Officials responsible for the Grapevine roadways said they also have a tough time keeping up when snow falls hours at a time.

Between snowstorms freezing pavement and bad drivers, it's better to close the highway and keep everyone safe than sorry.

“Safety is the big thing,” Ehly said. “There's a point where you have to just make the decision to close it.”

How a freeway is PLOWED

• Caltrans has a maintenance facility near the Interstate 5, Highway 14 interchange where all heavy equipment, including snow plows and graders, are stored and maintained.

• A grader is used first to remove the top layer of snow.

• When it has been graded closer down to the road and ice levels, Caltrans use snow plows. Then sand pre-treated with magnesium chloride is applied to melt the ice more. The department does not use salt because it is too expensive and washes away in the rain.

• CHP decides when a road closes and re-opens. The decision is based on road safety conditions.