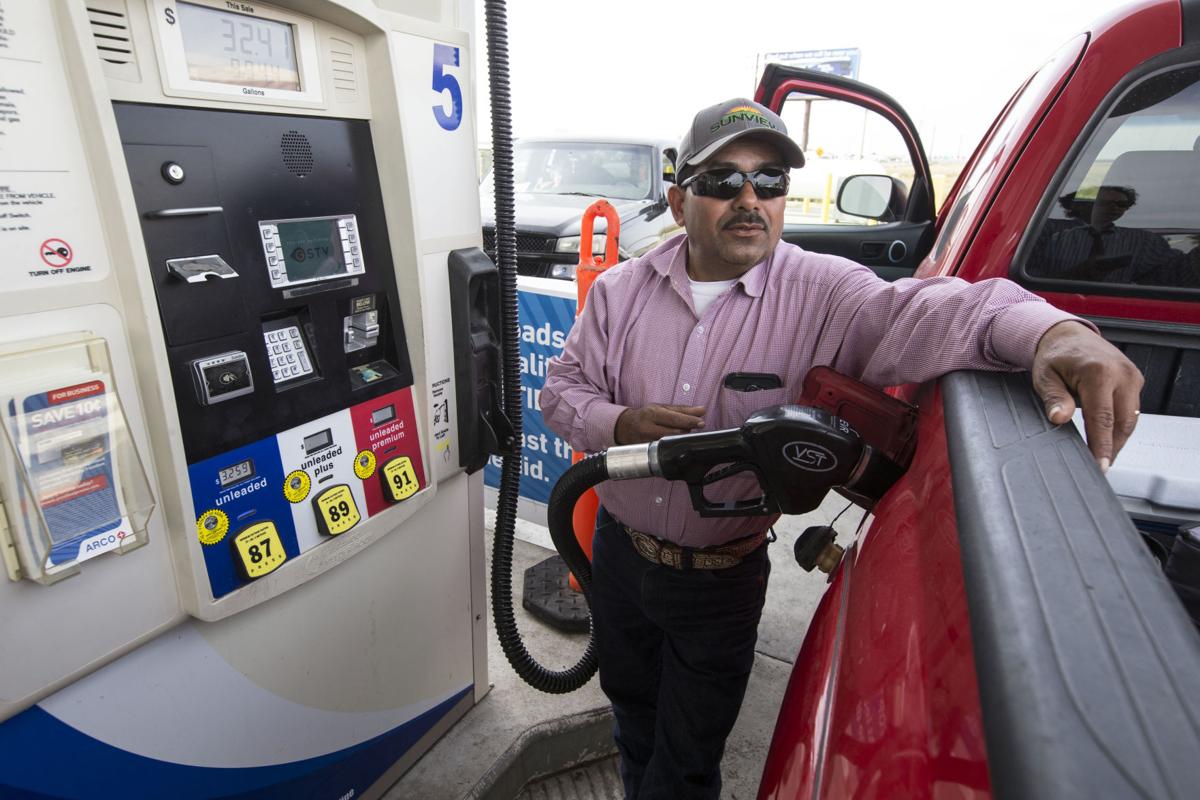 Gas prices are going up again. Martin Santos of Bakersfield fills his truck. The vineyard worker travels 60 miles per day, round trip, for work. 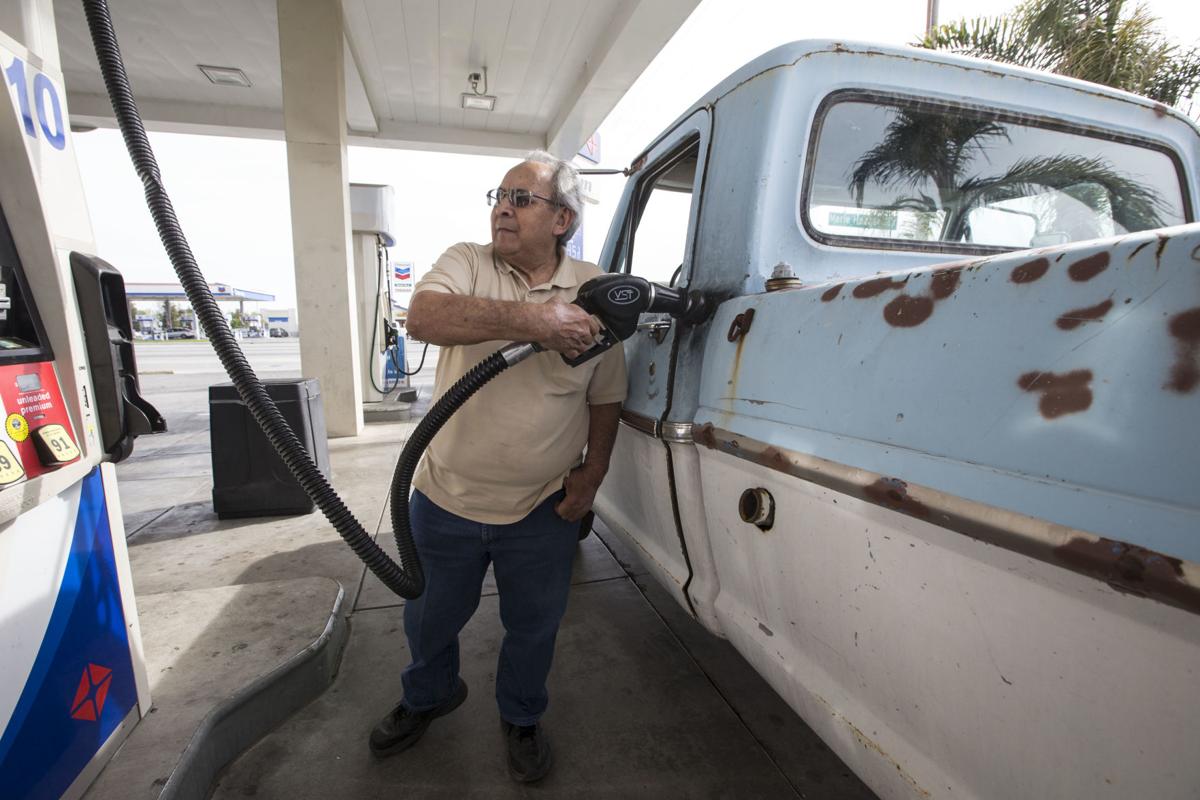 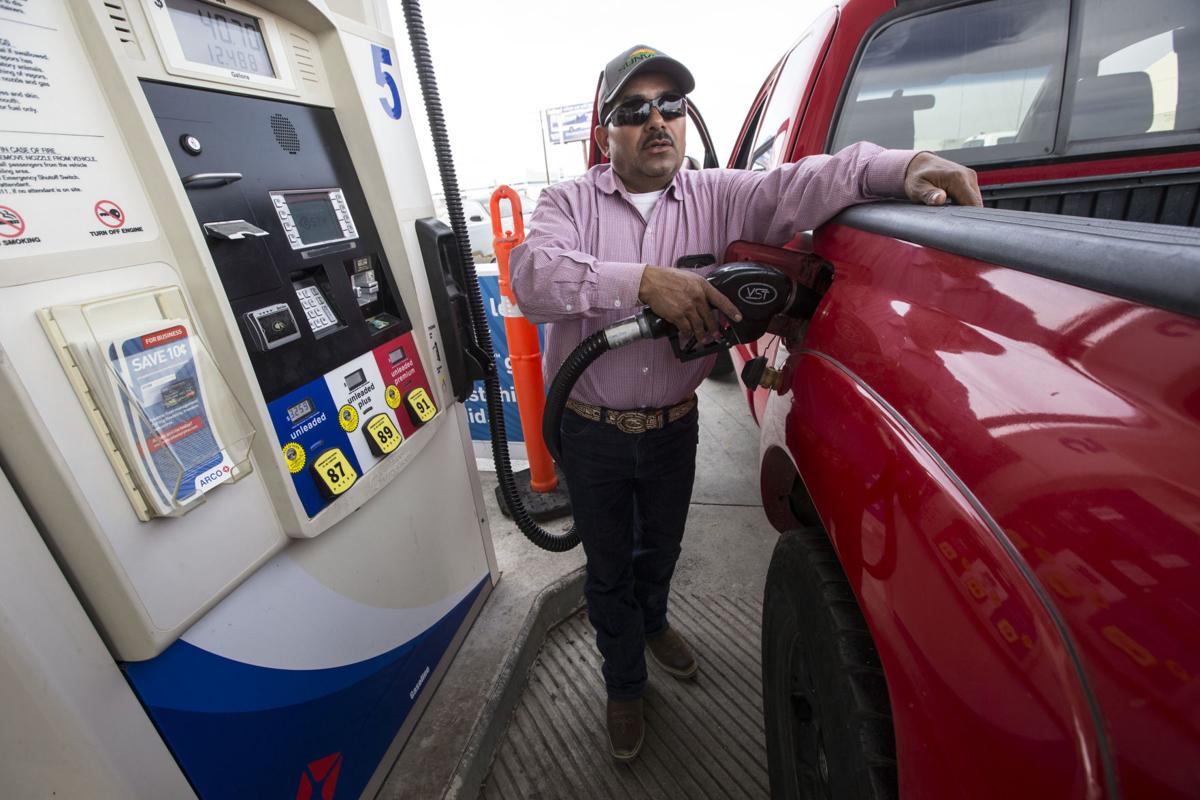 Martin Santos of Bakersfield fills his truck in this file photo. The vineyard worker travels 60 miles per day, round trip, for work. 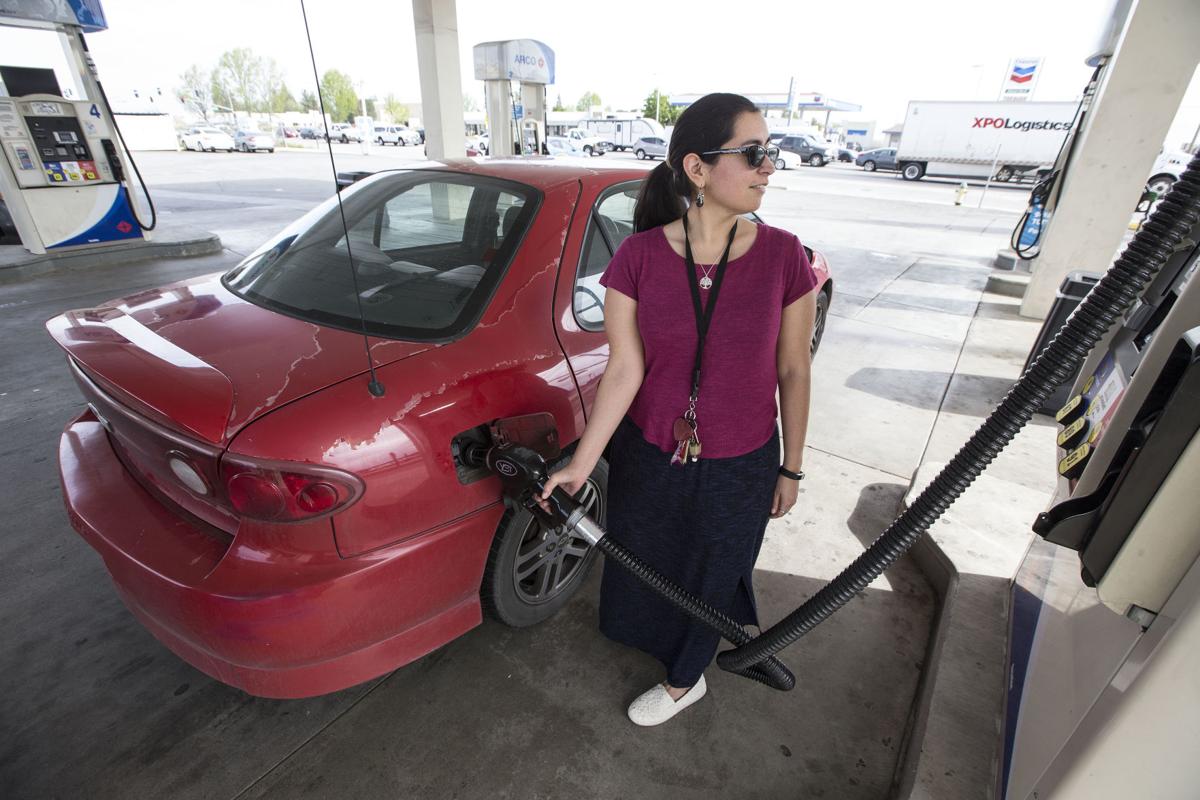 Bianca Cramer of Bakersfield fills her tank in this file photo. She travels to and from McFarland for work. 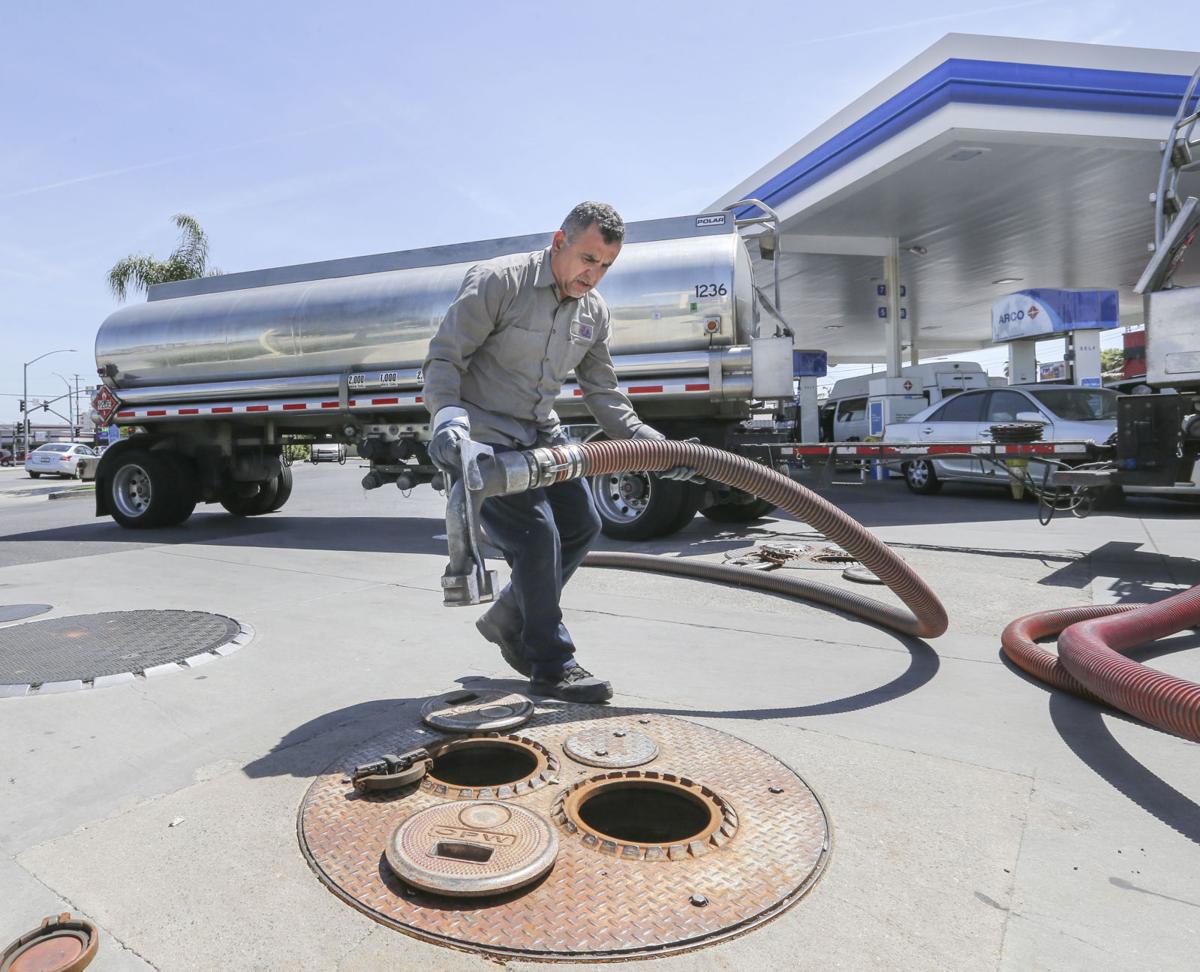 In this May 2018 file photo, Hugo Morales, a fuel driver with Williams Tank Lines, delivers gas at the Arco AM/PM at 24th and F streets in Bakersfield.

Gas prices are going up again. Martin Santos of Bakersfield fills his truck. The vineyard worker travels 60 miles per day, round trip, for work.

Martin Santos of Bakersfield fills his truck in this file photo. The vineyard worker travels 60 miles per day, round trip, for work.

Bianca Cramer of Bakersfield fills her tank in this file photo. She travels to and from McFarland for work.

In this May 2018 file photo, Hugo Morales, a fuel driver with Williams Tank Lines, delivers gas at the Arco AM/PM at 24th and F streets in Bakersfield.

Refining problems at half a dozen California refineries helped push the average price of unleaded gasoline in Bakersfield up 3 cents Monday, raising it to $3.57 per gallon, an increase of 13 cents in the past week.

The overnight price increase coincided with a switch to California's summer fuel blend, which affects much of Southern California and the eastern half of Kern. The county's western half isn't scheduled to transition to the newer blend until May 1.

Jeffrey Spring, a spokesman for the Automobile Club of Southern California, said the summer fuel transition does raise prices but that it should have had its full effect prior to Monday. He said the overnight increase probably resulted more from recent or ongoing disruptions at four refineries in Southern California and two others in Northern California.

"Most of (the state's driving fuel refiners) have been processing this (summer blend) and getting it in the pipeline because they have to be in the retail pump today," he said Monday, adding it is unusual to have six California refineries experiencing problems at the same time.

A surge in oil prices also contributed to the price increase, Spring said. Brent crude, the global benchmark Kern oil prices track, was trading at about $69.30 per barrel Monday, up about 3.7 percent from a week earlier.

A month ago, a gallon of unleaded in Bakersfield was selling for an average of $3.28, meaning the price has gone up almost 9 percent in about four weeks since then. A year ago, the city's average was $3.43 per gallon, according to the auto club.

The auto club reported California has the nation's highest average gasoline price, at $3.61 per gallon.

Henry Garcia, a contract worker for Southern California Gas Co., said he hadn't noticed prices increasing lately. The Bakersfield resident drives about 15 miles a day to and from his job just north of town. He figures gas prices are only going to keep rising.

Vineyard worker Martin Santos did notice gasoline's recent rise. He drives 60 miles every weekday for work, round trip, and said increasing gas prices can make the difference between going out for dinner and staying home.

The latest gasoline tax out of Sacramento, a levy of 5.6 cents per gallon set to take effect Monday, is fueling discussion locally over how to…

Part of the reason for that is because ex-Governor Brown decreed a year ago that the state needed more money for it's "infrastructure repair", so he increased your car registration and the excise tax on gasoline (without we the people getting to vote on it). Then, last November, we got screwed by lawmakers again, by the inclusion of the confusingly written Gas Tax proposition, which many people unwittingly voted FOR while actually trying to vote AGAINST. That stealthy and misleading law added 14 cents per gallon to California's gasoline excise tax. Add to that the changing to the higher cost "summer blend" of gas (which is a scam) and the fact that California retailers are allowed to charge up to 15 cents per gallon more to use a credit card (another scam, as most other states don't do this), and you see why we are all getting screwed here.

I recently completed my first partial-cross-country drive in decades. I knew that the gas was going to be much cheaper as I got to the middle of the country (why is that, by the way?) but I didn't previously know that it is ALSO higher-quality gas than what we have in CA (someone who travels quite a bit turned me on to that idea.) I got more miles to the gallon, on top of paying at least a buck less, per, in Midwestern regions.

refineries are having problems you say ? load of horse dung in my opinion they always go up about the time people start traveling and this crooked state needs more revenue ??

Yes. How convenient that half a dozen refineries all have "PROBLEMS" at the same time. These refineries have been helically inserting themselves into Californians for years with this summer/winter blend bait and switch scam. They ought to have figured out by now how to get out in front of these so-called "problems" before they occur.This sounds like the supposed "pipeline failures" that occurred down in AZ, TX and LA. a decade or so ago that caused some retailers to spike their prices from an already high $3.50 a gallon, to over $5 a gallon overnight. It's all about the dollar, baby! And the oil barons just can't stand it if gas goes below $3 a gallon and we can all start untightening our belts a little.

It must make it easy to run this article every year with minor variations. Every spring, prices jump overnight. Every year it's because refineries have had unexpected difficulties. Some years there's no quote from someone involved, but I guess that's the luck of the draw.