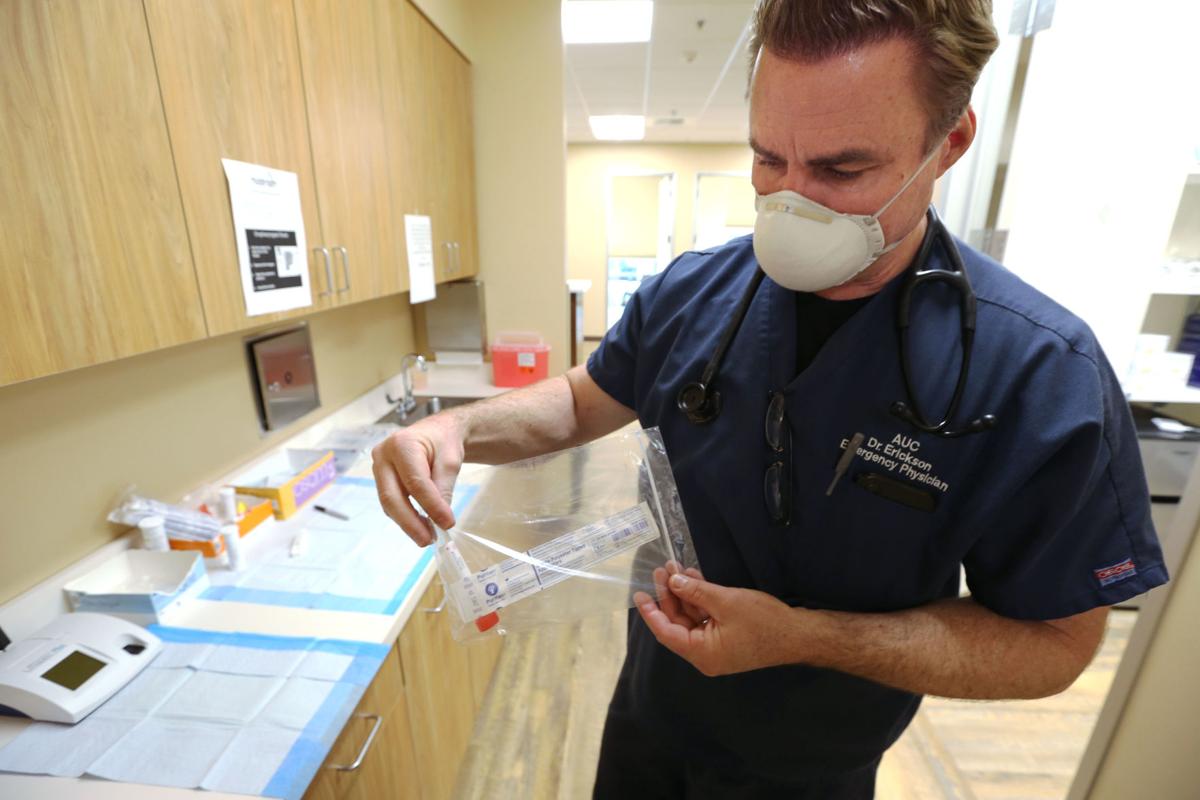 Dr. Dan Erickson, who has been working 14- to 16-hour days, holds a COVID-19 test kit. Erickson is co-owner of Accelerated Urgent Care, which has six locations in Bakersfield and is offering testing for COVID-19. He said he is doing about 200 tests a day and has had 96 tests come back positive so far. 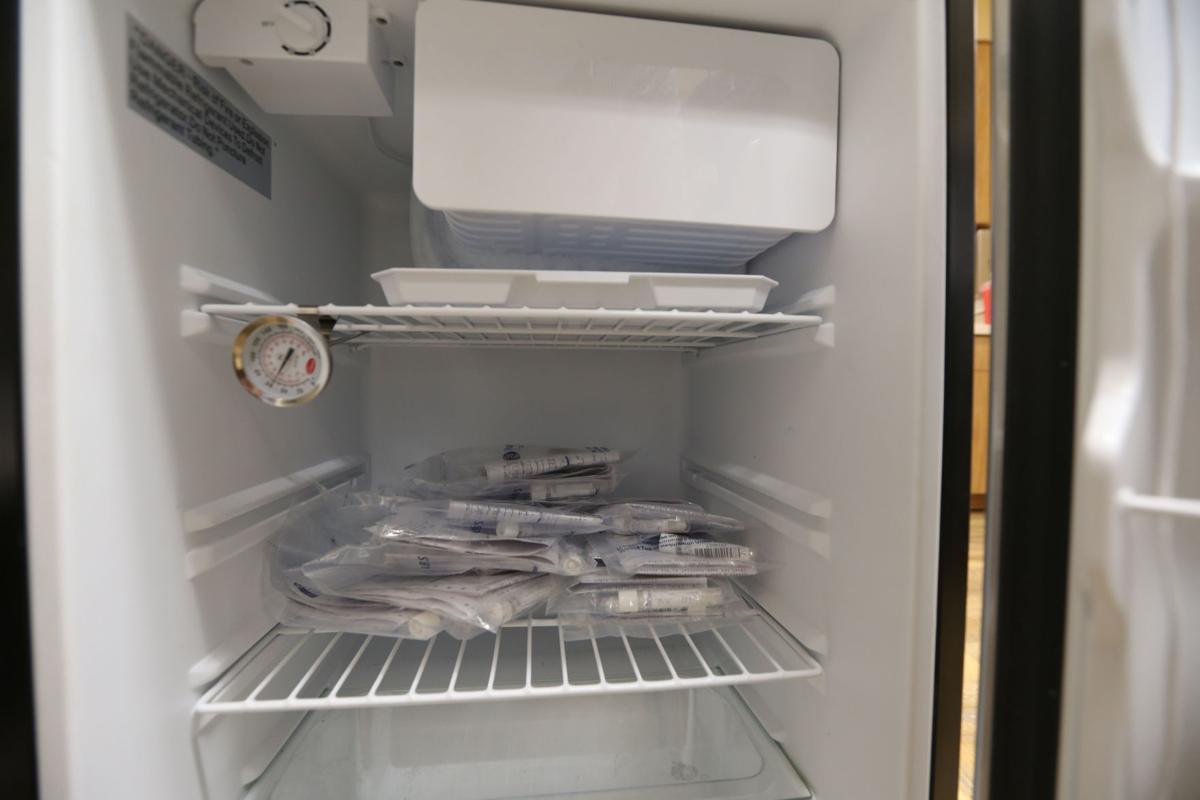 After a patient is tested, the kit is placed in cold storage before sending to a lab to run the test for COVID-19. Erickson said he can now get results in 24 hours. 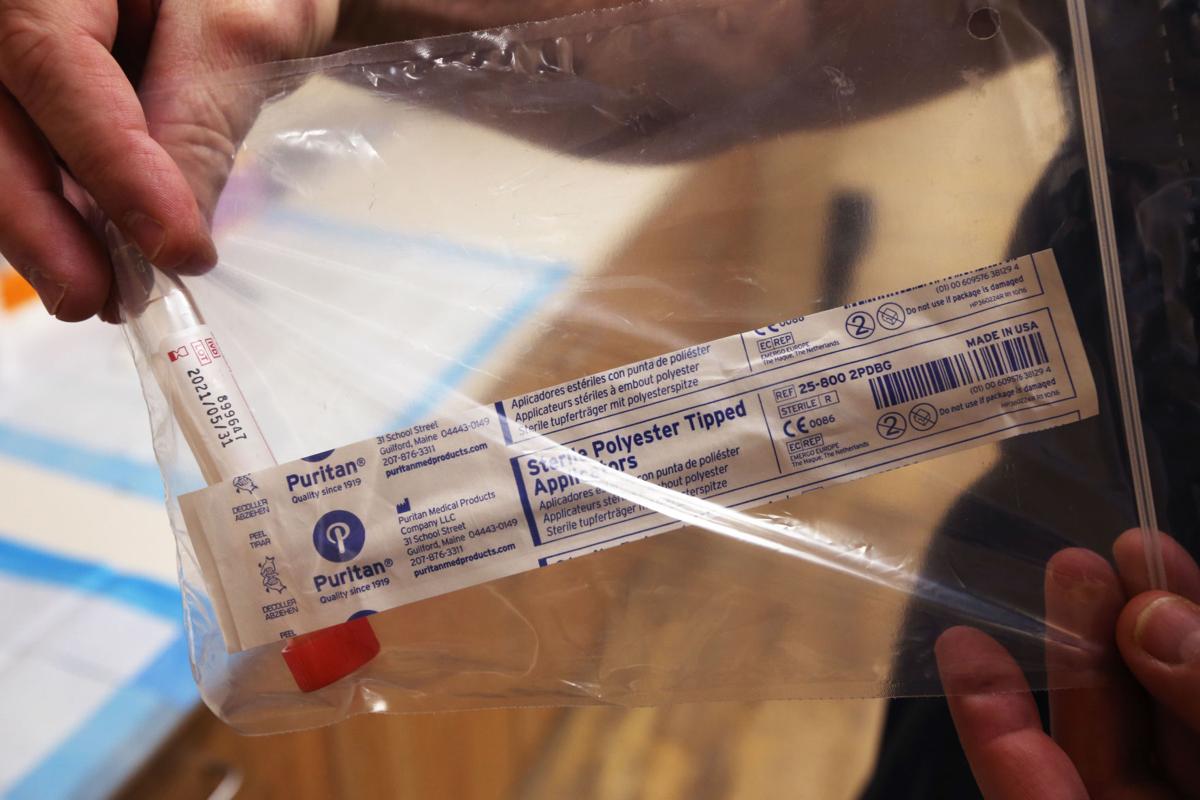 Dr. Dan Erickson, who has been working 14- to 16-hour days, holds a COVID-19 test kit. His Accelerated Urgent Care practice had seen 96 positive tests as of Saturday. 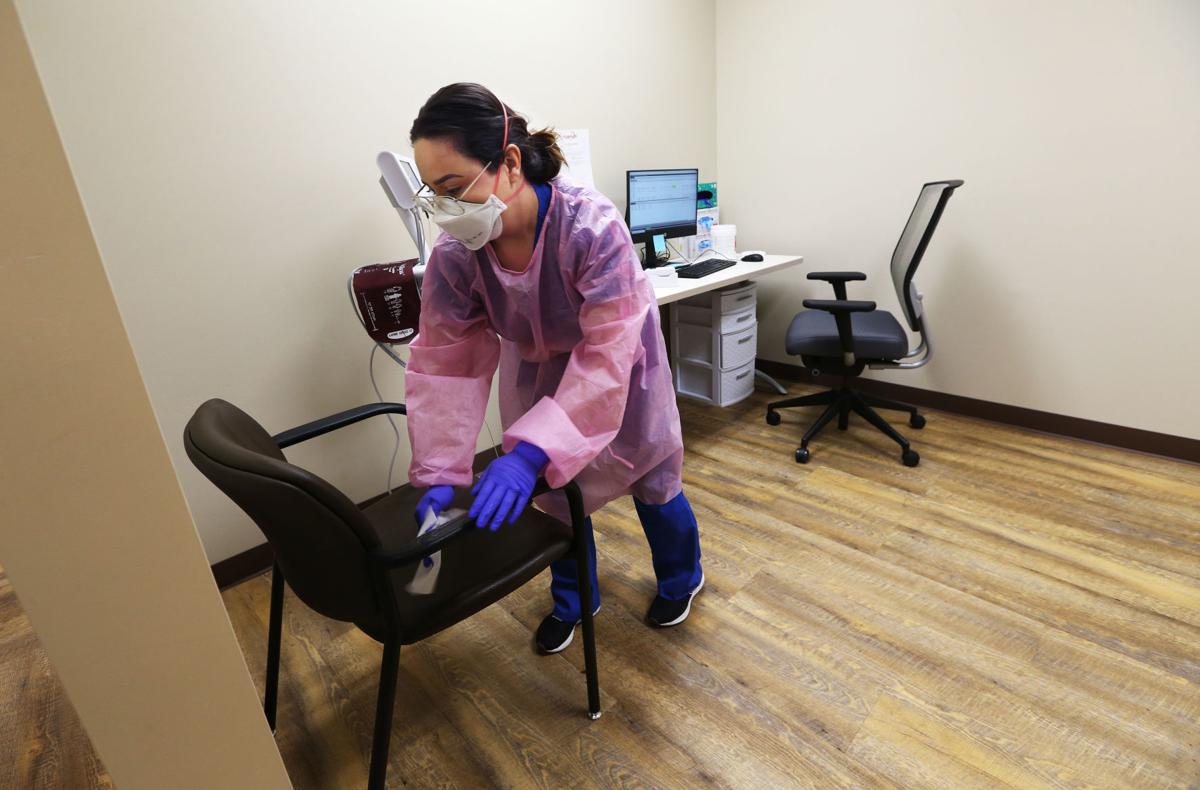 Medical Assistant Desiree Villa cleans the room after each patient who comes into it at Accelerated Family Medicine on Coffee Road.

Dr. Dan Erickson, who has been working 14- to 16-hour days, holds a COVID-19 test kit. Erickson is co-owner of Accelerated Urgent Care, which has six locations in Bakersfield and is offering testing for COVID-19. He said he is doing about 200 tests a day and has had 96 tests come back positive so far.

After a patient is tested, the kit is placed in cold storage before sending to a lab to run the test for COVID-19. Erickson said he can now get results in 24 hours.

Dr. Dan Erickson, who has been working 14- to 16-hour days, holds a COVID-19 test kit. His Accelerated Urgent Care practice had seen 96 positive tests as of Saturday.

Medical Assistant Desiree Villa cleans the room after each patient who comes into it at Accelerated Family Medicine on Coffee Road.

What course the new coronavirus will take in Kern County is unknown and local officials have been reluctant to hazard a guess. But evidence is mounting that the disease is taking hold throughout a wide portion of the community and the severity of cases is increasing.

In the 20 days since the first positive case of COVID-19 was reported in Kern County, more than 200 people have now tested positive for the virus and two people have died.

Despite a steady increase at the outset, the rate of new cases picked up in the past week, doubling every three days, from 47 on March 28 to 101 on Tuesday to 199 by Friday. The total stood at 210 on Saturday, which included five nonresidents who tested positive while in Kern County.

"I do think the amount of virus in the community is growing but how much I don’t know," said Dr. Royce Johnson, chief of infectious disease at Kern Medical and director of the Valley Fever Institute. Bottlenecks in testing and processing results when testing first started delayed many results, Johnson said, and we could be seeing a bump in cases due to that.

But other indicators are pointing to an increasing problem.

As of Thursday, 27 people were hospitalized with COVID-19 in Kern County and 12 of those patients were in the ICU, according to a California Health and Human Services Agency dataset that reports hospitalizations by county. An additional 77 patients in hospitals had symptoms consistent with the coronavirus but were awaiting test results, and 23 of those cases were in the ICU, according to the data.

Lyon said that local trends right now seem similar to what the state of Washington is experiencing, which is low patient volumes in hospitals but high acuity of cases among those hospitalized, as opposed to New York City, where there is both high volume and high acuity.

In fact, he said, local hospitals are experiencing a dramatic lull right now. Volumes in Kern's 10 hospital, which have a combined 1,222 beds, are down 50 percent to 60 percent right now, Lyon said, likely a sign that the public is heeding warnings and not heading to the emergency room if they are not seriously ill.

Meanwhile, predictions on when a possible surge in cases could happen continue to fluctuate. The University of Washington's Institute for Health Metrics and Evaluation on Saturday predicted April 26 as the point when California will see its peak demand on health care resources.

‘INFECTIONS ARE LIKELY TO INCREASE’

While no one wants to speculate at this point how bad things will get, almost everyone agrees it will get worse.

"We’re still pretty early in the course of the trajectory," said Lyon, who expects local hospitals to get busier as the disease progresses and the severity of illness catches up with the number of positive cases.

Statewide cases are on an upward trajectory and deaths are rising. Los Angeles is emerging as one of the most impacted areas, with more than 4,600 cases and 93 deaths as of Saturday. And health officials there said they expect cases to rise by 1,000 a day next week. Daily deaths in California were about 30 on Wednesday and had increased to nearly 40 by Friday, according to the Los Angeles Times.

Kern County had the most cases of any San Joaquin Valley county as of Friday, though San Joaquin County was leading in deaths, with 11, followed by Tulare County with three, according to data compiled by the L.A. Times.

"Following what has happened in almost every other place with local transmission, infections are likely to increase," said Daniel Park, an assistant professor of public health at UC Irvine.

How quickly cases increase will be directly related to how well we can control transmission through physical distancing and hand washing, he said.

Cases in metro Bakersfield as of Saturday stood at 156, which accounted for 75 percent of the total cases countywide. There were 37 cases as of Saturday in the western region of the county, which includes Delano, Wasco and Shafter; seven cases in a region that includes Frazier Park, Tehachapi and the Kern River Valley; and five cases in the eastern Kern desert.

Asked if Kern's proximity to Los Angeles could impact our level of virus activity, Johnson, of Kern Medical, said he doesn't think Kern will fare as badly as our southern neighbors.

"I think to the extent that we don’t have much travel, I think we could conceivably do better than Los Angeles," he said.

While it's been nearly three weeks since Kern reported its first case, the virus seemed to hit closer to home in the past week.

As of Saturday, COVID-19 cases had been reported at a number of local entities. Brookdale Riverwalk senior living facility announced a case, as did Standard School District. An employee at Trader Joe's and two at Albertsons, one at the store on White Lane and the other at the store on Panama Lane, were reported to have tested positive by both businesses. And Sheriff Donny Youngblood said Friday there are "several positive cases" in the sheriff's department but would not specify if that was among deputies or the inmate population or both.

It was announced this week that schools would remain physically shuttered for the rest of the school year and some businesses began to lay off workers.

As local hospitals grappled with supply issues, many began to put their inventories under lock and key.

"Normally we put (supplies) out on carts but, you know, the first day this really hit we began seeing boxes of it disappear so we pulled it back up in to our general stores, and started releasing it by the box," said Tim McGlew, CEO of the Kern Valley Healthcare District. Employees at two Bakersfield hospitals reported similar measures at their facilities.

At Ridgecrest Regional Hospital, CEO Jim Suver said he has started receiving requests from some local employers to have employees tested who may have been exposed to a sick person. Many businesses are following a protocol where anyone exposed to someone with a fever or other symptoms of COVID-19 are being told to self-quarantine at home for 14 days.

Suver said he prioritizes requests from law enforcement but has had to turn down most other requests because tests must be reserved for those who need them most. According to the U.S. Centers for Disease Control and Prevention guidelines, priority for testing should be given to people who have symptoms of the virus and are hospitalized, health care workers, first responders or people exposed to those known to have the virus.

At one point last week, Suver said, the hospital was down to just 50 test kits on hand, a critically low number for a health care organization providing care to some 30,000 residents.

In Bakersfield, Dr. Dan Erickson, who co-owns Accelerated Urgent Care, which has six locations in the city, has implemented a large-scale testing operation. Erickson estimates he's doing about 200 tests a day. He had 96 patients test positive as of Saturday.

"People want to know," he said, "so we're set up to process and give people results."

With a background in emergency medicine, Erickson said he always had a mind for logistics. When he opened Accelerated Urgent Care eight years ago, he did so with the intent of creating a better health experience through efficient processes.

It was almost as if he was preparing for this moment. As the coronavirus began to gain attention early this year, he began making plans for obtaining test kits and supplies.

Now his centers are a go-to spot for those seeking testing, even though public health officials say anyone should be able to get a test through their regular doctor if they have symptoms.

Erickson said his staff is working past midnight on many days, trying to plow through the large patient load.

He is now getting calls from police and fire officials and local companies that want to have employees tested.

Nine firefighters came in for testing last week because they'd been exposed to another firefighter who had a fever, he said.

They all tested negative and were able to go back to work rather than staying home out of precaution.

He acknowledged he is not following CDC guidelines for testing and will test even those not exhibiting symptoms, including patients whose employers require a negative COVID-19 test for them to return to work.

"If they come to me and I say you don't meet the (federal testing) criteria, that person now makes zero. Now they can't work or feed their kids," Erickson said.

"If everybody stays at home the system falls apart," he added. "That's not rational."

"I'm trying to keep the community going," he said.

And the sooner you aren't, the better we'll all be...

The cases of COVID 19 will continue to increase both in the general population and among medical professionals. At Memorial Hospital only doctors, those assisting in the OR and caring for identified infectious patients are allowed to wear mask. Nurses, techs or other support personnel are not allowed to wear mask. The rational for this directive, Memorial Hospital "doesn't want to scare patients or visitors".