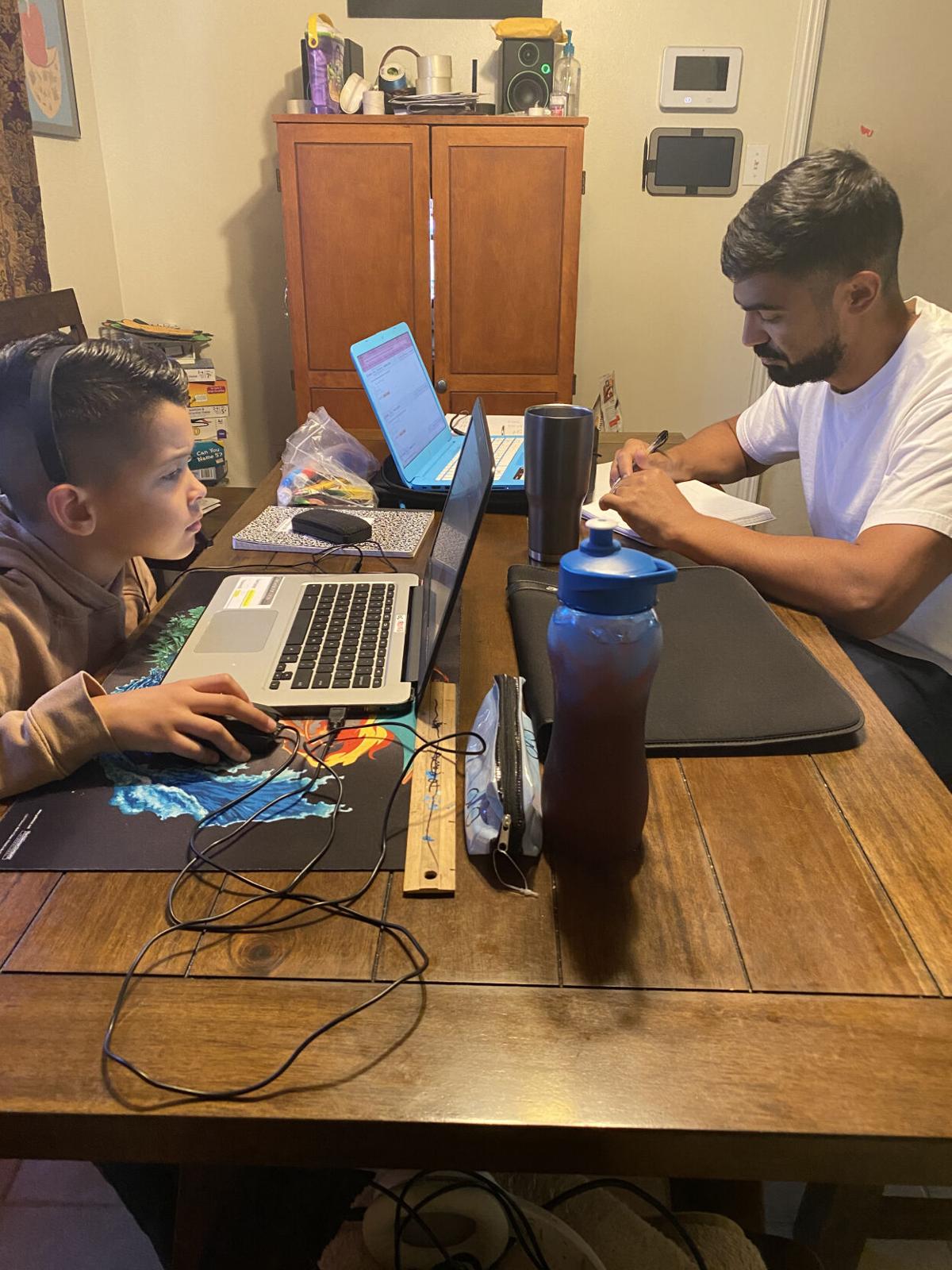 Seth Campbell, a second grader, and Robert Martinez, a BC student, work from home on their first week of distance learning on Friday. 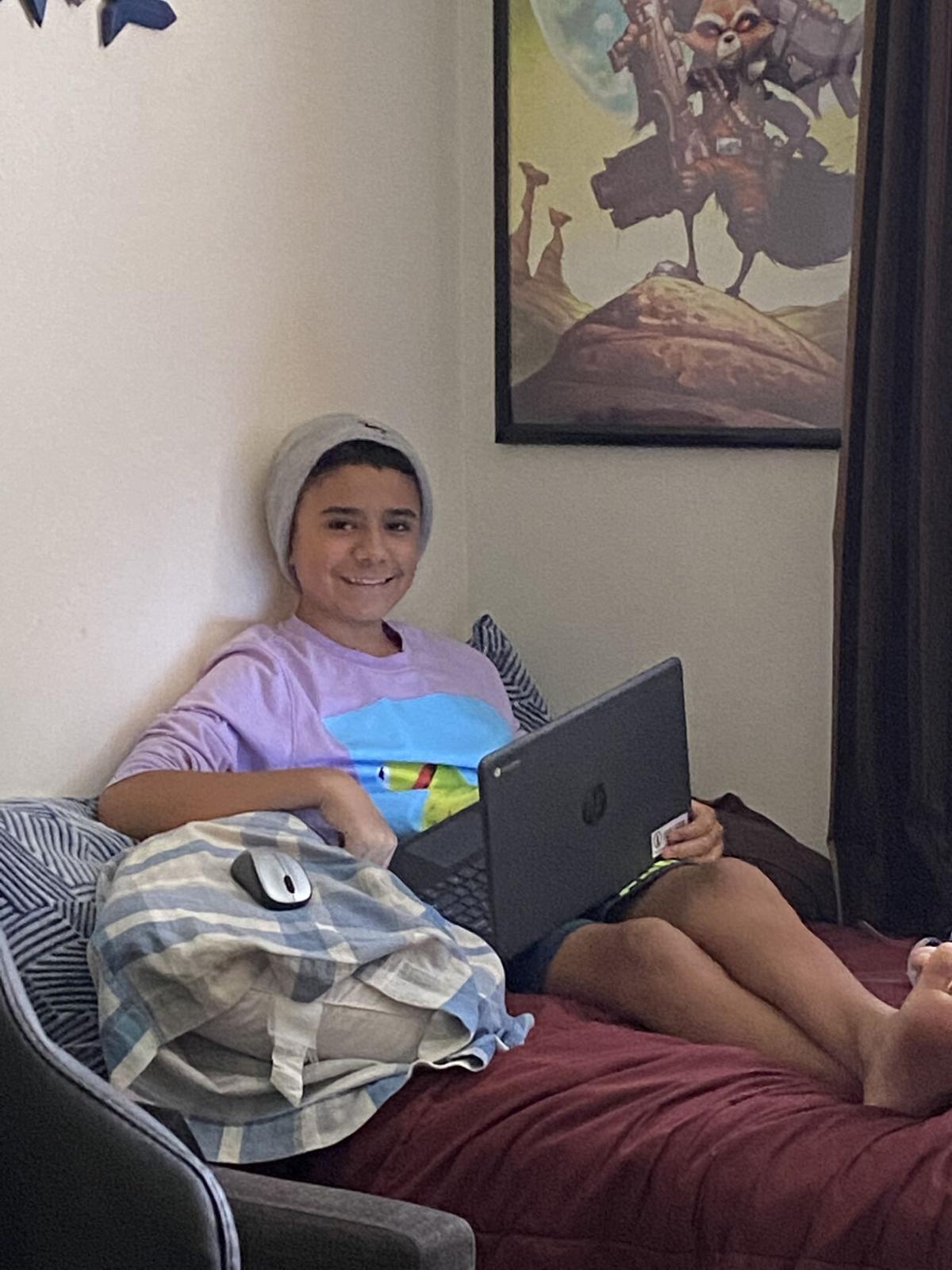 Jake Martinez is an eighth grader at Chipman Junior High, who is ready for distance learning at home. 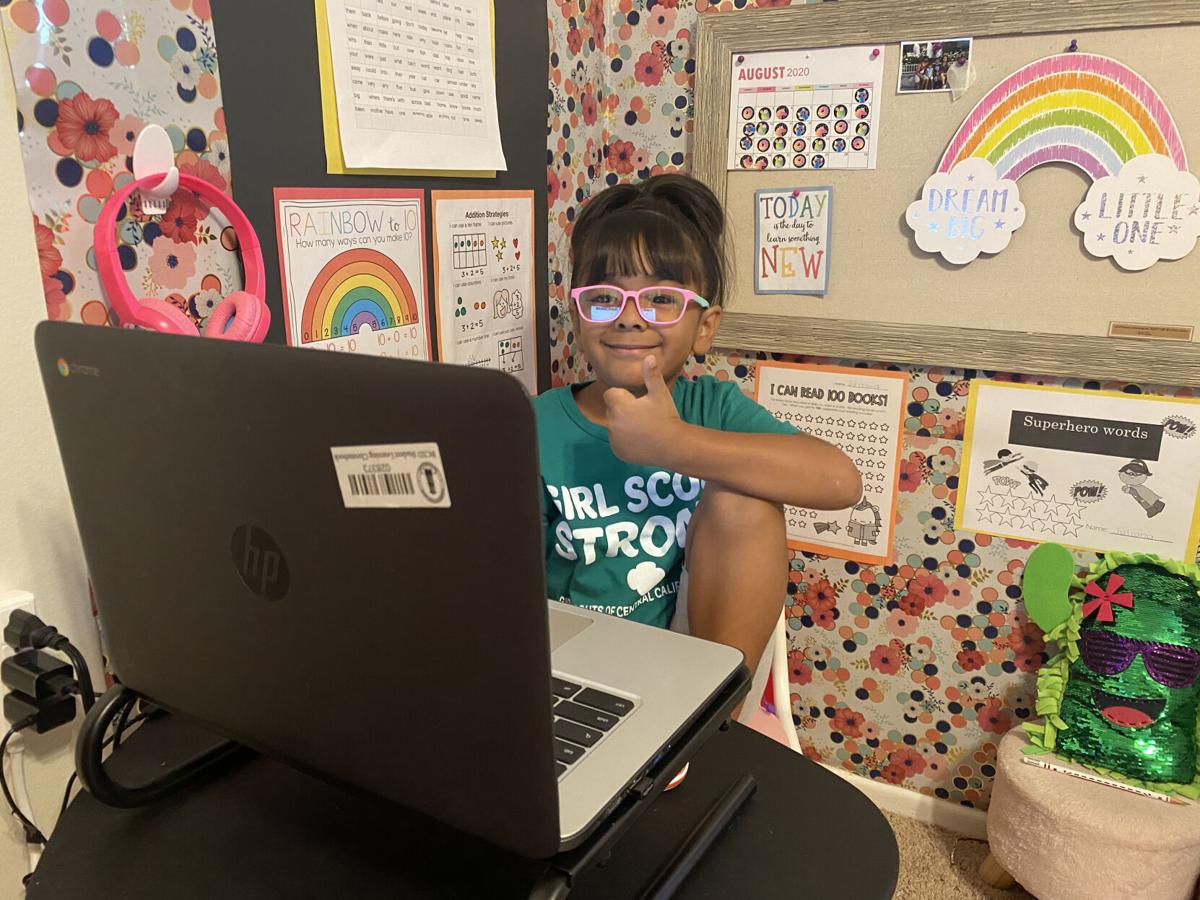 Seth Campbell, a second grader, and Robert Martinez, a BC student, work from home on their first week of distance learning on Friday.

Jake Martinez is an eighth grader at Chipman Junior High, who is ready for distance learning at home.

Every year, Mira Monte High School Principal William Sandoval mentally prepares himself for things to go wrong when school starts, but this year worried him more than usual. The first big bump in the road came Monday morning with the worldwide Zoom outage that brought the first hour of distance learning screeching to a halt for thousands of students in the county.

But by the end of the week he was breathing a sigh of relief: “This time last week, I didn’t think I’d be sitting here today feeling the way I feel now.”

Students in some of the county’s biggest districts — Kern High School District, Bakersfield City School District and Panama-Buena Vista Union — all logged on for their first days of school this week. It’s been a week marked by teachers, parents and students trying to adapt to new hardware, new software and also the frustrating limits of local technology infrastructure. But it’s also been about teachers doing their best to help students connect in brand-new virtual classrooms in spite of all the technological hurdles.

McAuliffe Elementary Principal Jennifer Payne said her staff met every day after school to troubleshoot. Monday was tough but by Friday they were feeling more optimistic about the road ahead.

“I’ve seen more collaboration this week than I’ve ever seen before because they have this common challenge and they need each other more than ever,” Payne said. “So it’s been beautiful to watch.”

At Sierra Middle School, math teacher Ed DeLaVega is team-teaching: one teacher monitors the class and answers questions about the lesson in a chat box, while the other teaches the lesson. They learned quickly how to avoid “Zoom-bombing,”  when they let everyone into a virtual class and someone decided to blast music.

At home, families have struggled with technology despite their best efforts to prepare. Robert Martinez, 38, at Bakersfield College, and his son Jake, an eighth-grader at Chipman Junior High, and daughter Juliana, a first-grader at Nichols Elementary, discovered the hard way just how much data Zoom can eat up.

Yéssica Martinez, the family matriarch, has been staying home to monitor her children’s education. She said the district-provided hot spots lagged so much she switched back to their home Wi-Fi. Then, within a few days, they were close to hitting their household cap of data — a cap the family didn’t even realize existed. All in all, and she said it was a stressful week.

DeLaVega said that hot spots seem to only be as effective as the cellphone towers that they’re near. He has three to five students per period being booted out of Zoom because of connectivity issues, whether they’re on Wi-Fi or a hot spot.

Poor Wi-Fi is a problem that Irene Ruiz, a senior at Arvin High School, has struggled with. Her mom watches a second-grader who's logged onto Zoom at the same time, which affects internet connectivity.

“When the teacher asks me a question, I sound glitchy,” Ruiz said. “When I ask a question, it’s the same thing.”

She felt frustrated, particularly in tough classes like statistics or anatomy, when she would miss something that the teacher said or when an assignment wasn’t clear. But as the week went on, she got better using the chat box to ask questions instead of the video function.

“I feel like our parents should be patient with us and understand that now it’s going to be harder for us to do our work,” Ruiz said. “Even me! I should have patience with myself.”

Teachers have been trying to find workarounds. Teachers at McAuliffe who have issues will use Google Meet if Zoom is giving them problems, or they’ll use shorter periods of synchronized instruction. DeLaVega said he’s talked with students who want to keep their cameras off during Zoom, because it seems to be so data-hungry.

The first week of first grade was also difficult for the entire class of Juliana Martinez. Her mother, Yéssica, said parents were struggling with the technology being used to turn in assignments and students were being unmuted on Zoom, creating a chaotic scene. At one point, she said one of the students started crying because, like many first-graders, she didn’t know what a space bar was.

But by the end of the week, she said the teacher seems to be doing better at hitting the mute button, and she’s watched her daughter become more independent doing assignments on her Chromebook in recent days.

Besides trying to wrangle the technology, teachers and administrators said the overarching goal of last week was just to get students used to a new way of learning, and comfortable in their new online classrooms.

“I preached to my teachers that we wanted to have connection before content,” Sandoval said.

Many are creating assignments so they can practice working online while getting to know each other and their teachers.

“This week we just worked on making them feel welcome,” DeLaVega said. “We just focused on them and hearing them out.”

He noticed a gradual change over the week in his students. Some of the students seemed shy or embarrassed about showing their homes on Zoom, but by the end of the week, they had built up trust in class. He said he did a poll for one class asking if they liked distance learning, had mixed feelings or hated it. Out of a class of 60, only two students said they hated it. Attendance has been good; out of the 98 students in his class, only three were absent Friday.

Yéssica Martinez said that she's just grateful the students have a schedule, and she thinks it will only get better as they get used to a new routine.

“These kids had no structure for five months,” she said.

With that said, many students miss the physical experience of attending school, even if they understand why it’s better for them to be at home.

“The students are always so much more adaptable and tech-savvy,” said Payne. “But they do really miss the face-to-face connection with peers.”

“I went into a classroom and the kids were on the screen on Zoom, and they were begging me to let them come back to school,” Sandoval said.

Sandoval says that he’s been pleased with attendance numbers this week, and staff members tell him students want to be together. It’s not school like it used to be, but they enjoy at least being able to socialize and connect somewhat. Between those two pieces, Sandoval said, “I’m super happy with how this week went.”

Early this month, the state announced it would allow school districts, even in counties like Kern that are on the most restricted tier for COV…

The first week was a joke as far as education was concerned. Students can't be monitored by the teacher, students are playing Fortnite against each other during class. A teacher in an AP English class is on "maternity leave" the substitute doesn't log on personally , he/she only post assignments online. One AP teacher is online for 30 out of the 90 minute class period. Out of the 4 AP and 1 honors class being taken by a senior high school student , only two teachers are using direct instruction for the full class time. I can only guess what is going on with the majority of elementary age students.

Attend a Zoom Parent Night to get brought up to speed on how teacher student time is organized and... its new... not a failure...we get good at what we do repetitively and the tech part is just structure... all classrooms dont look the same... be positive.... it will be ok

Oh, and they play games, use Snap Chat etc in the physical classroom without teachers being aware... she/he can either monitor that stuff or teach... like passing notes was

Just keep the kids as safe as possible, thus keeping the parents, Grandparents, Aunts and Uncles safe until there's a vaccine next summer. It's not forever. Have them read! The classics! A formal education. Reading is fun-da-mental!

Dweeb, you obviously know nothing about kids, education and curriculum. The long-term consequences for both the kids and well-intentioned educators ( yes, the good ones, not bad ones) is devastating. There is a social component involved for the youngest, but as a whole, society must not let these kids fall too far beyond they can't make it up - or they will miss steps in a hurry to get back on track. It really is for the benefit of these kids and the future of America that we've got to stop this nonsense. This isn't the west in 1865 where time was your friend and technology a finely crafted wagon wheel. Competition and the global economy require us to get back in the game. Dweeb, you're out of your element here. Just because one can comment on a particular issue here doesn't mean one should. But now I understand - perhaps it IS better you just copy and paste.