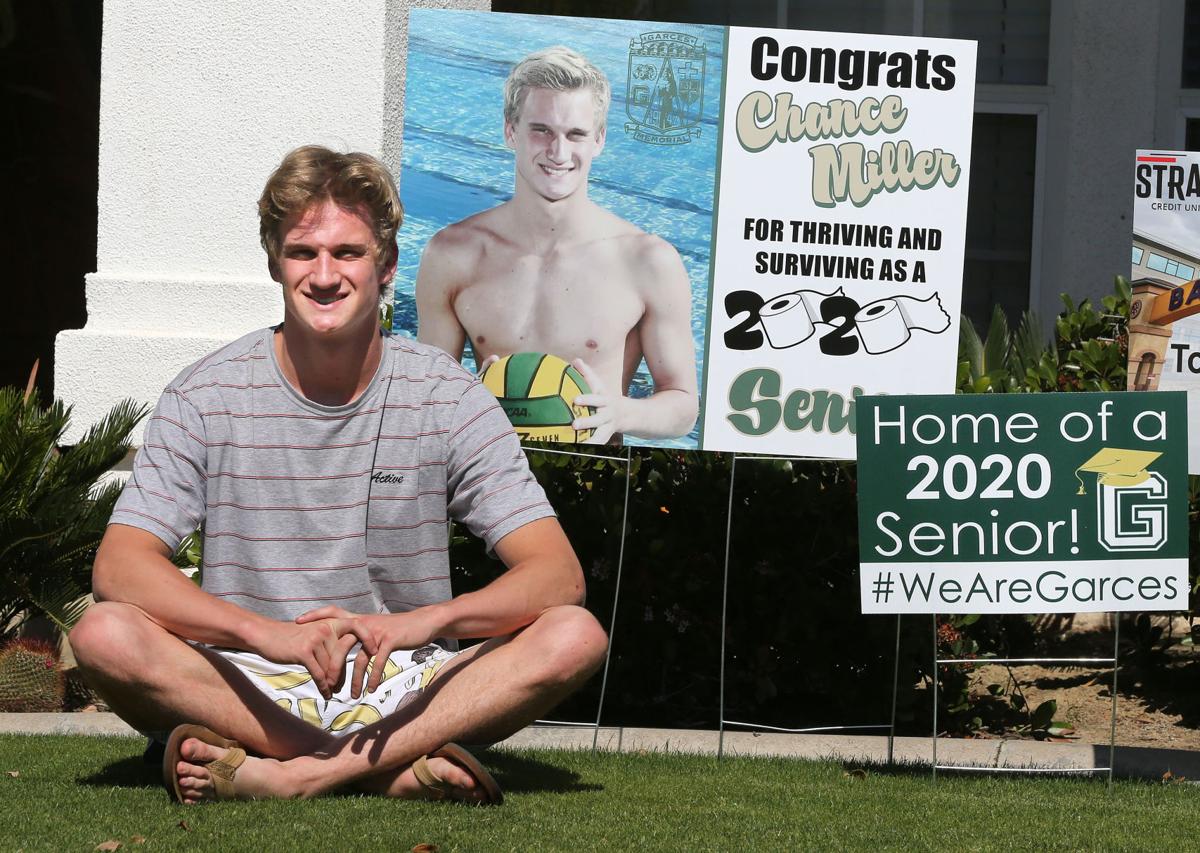 Dana and Jim Miller celebrate their son, Chance, and his high school accomplishments with a sign in front of their home. Several other families and schools across Kern County are trying to honor graduating students with lawn signs. 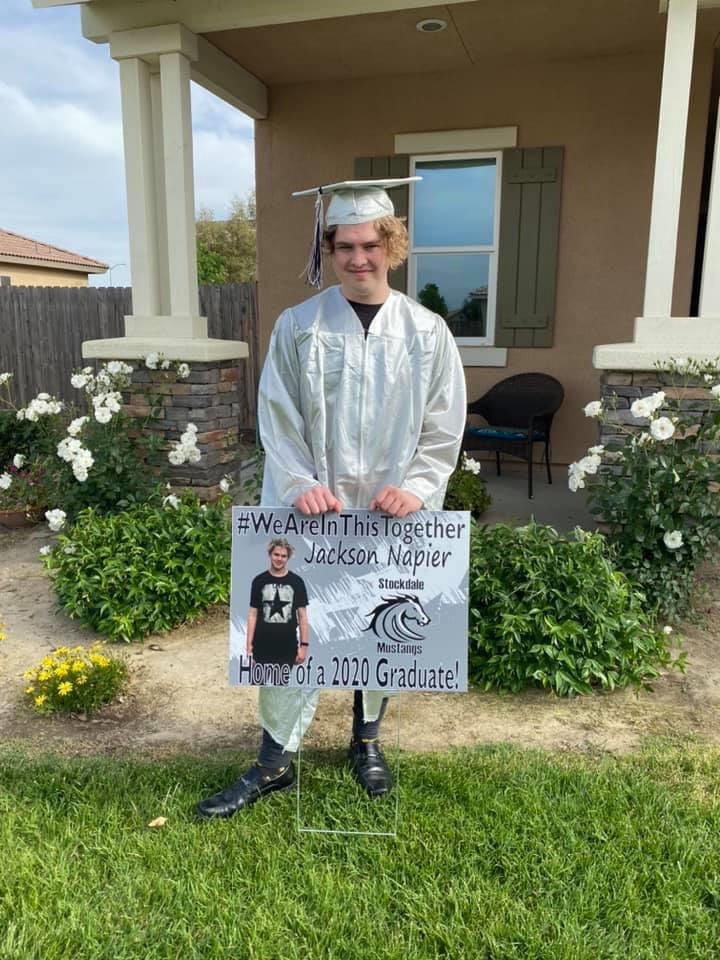 Jackson Napier, a Stockdale High School senior, donning his cap and gown, takes a photo with his senior sign. 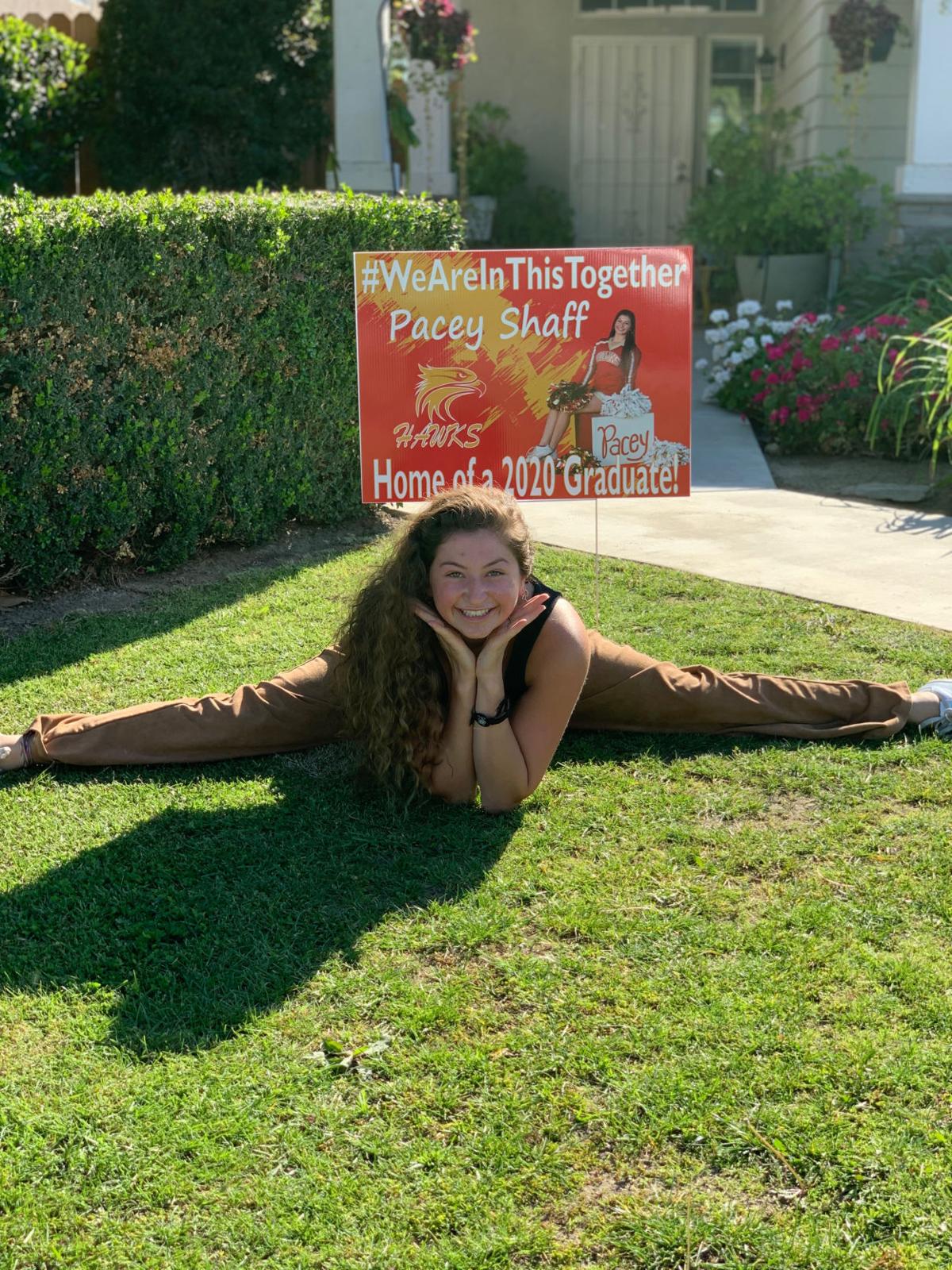 Pacey Shaff, a senior at Centennial High School, showcases her love for cheerleading on her senior sign.

Dana and Jim Miller celebrate their son, Chance, and his high school accomplishments with a sign in front of their home. Several other families and schools across Kern County are trying to honor graduating students with lawn signs.

Jackson Napier, a Stockdale High School senior, donning his cap and gown, takes a photo with his senior sign.

Pacey Shaff, a senior at Centennial High School, showcases her love for cheerleading on her senior sign.

Take a drive through Bakersfield and Kern County neighborhoods and you might spot a uniting factor among high school seniors: front lawn signs honoring their impending graduations.

Jackson Napier, a senior at Stockdale High School, noticed several of his peers had signs showing off their high school accomplishments and saluting their graduating class, and knew he had to get in on the action.

"Even though there's probably not going to be a ceremony, there’s still celebration," Napier said.

His family was gearing up for an exciting time: Napier would be the first child to graduate high school, and was headed to New York University in the fall to pursue music performance.

With plans up in the air due to the coronavirus pandemic, his family wanted to do what it could to honor the soon-to-be graduate. With that said, his mother contacted Valley Printing and added some pride to their curb appeal.

Now, any time Napier steps out to his front lawn, he gets to see the words #WeAreInThisTogether and is reminded of the hard work put in throughout his high school career.

"The little things that we can do to celebrate 12 years of school, they really do make a difference," he said.

It's a trend that's taken off across the country, and appears to be picking up steam locally. Signs and banners, of all shapes and sizes, proudly boast there's a graduating senior in the house.

The signs showcase a student's name and photo, with some highlighting extracurricular activities.

At Garces, Chance Miller's swimming season was cut short this year. On top of that, prom, a senior trip to the Bahamas and his graduation ceremonies were canceled or postponed.

Hoping to put a smile on their classmates' faces, associated student body members passed out signs to graduates. Miller's has a photo of him from water polo season and the message, "Congrats Chance Miller for thriving and surviving as a 2020 senior."

"I thought it was cool ... it is a little uplifting," Miller said.

Though Miller wishes he could be back in the pool and spending time with friends, he thought it was a nice gesture that honored seniors.

Those who pass by Centennial senior Pacey Shaff's house immediately catch sight of her bright red and yellow sign, in honor of the Golden Hawks' colors. Her love of cheerleading also is showcased by a photo of her sitting on a cheer box in uniform, holding pompoms.

The activities, friends and teachers are what she misses most. The next chapter of Shaff's life consists of military service, so she was looking forward to making the most of her time left in high school.

But she's tried to find positives, one of which is realizing the great accomplishments she and her friends have had. The sign on her front lawn, in her eyes, serves to commemorate that.

"We aren’t able to have a graduation or aren’t represented in the way we usually are in front of thousands of people," she said, "but it’s another congratulations that people can see and be like, 'I know somebody, who has worked really hard for so many years, lives there.' And you can be proud of yourself, too."

It was a bittersweet moment when Cesar Chavez High School senior Parneet Sahota picked up her cap and gown, knowing she would most likely not get a chance to wear them during her early June ceremony.

But the pickup came with a free sign to boost her spirits.

"Our administration is trying their best to give us a good send-off," she said.

Parents, too, get a boost letting neighbors know they have a 2020 graduate present. When Jill Napier received her son's sign, she dressed him up in his cap and gown and took pictures to send to his grandparents.

It's not the way she imagined sending her grad off to New York, but it's the best for right now.

"He’s like, 'Mom, I know you’re disappointed I’m not graduating from high school like normal, but just be excited I’m going on to my next chapter in life," she said. "We just have to find new ways to celebrate."