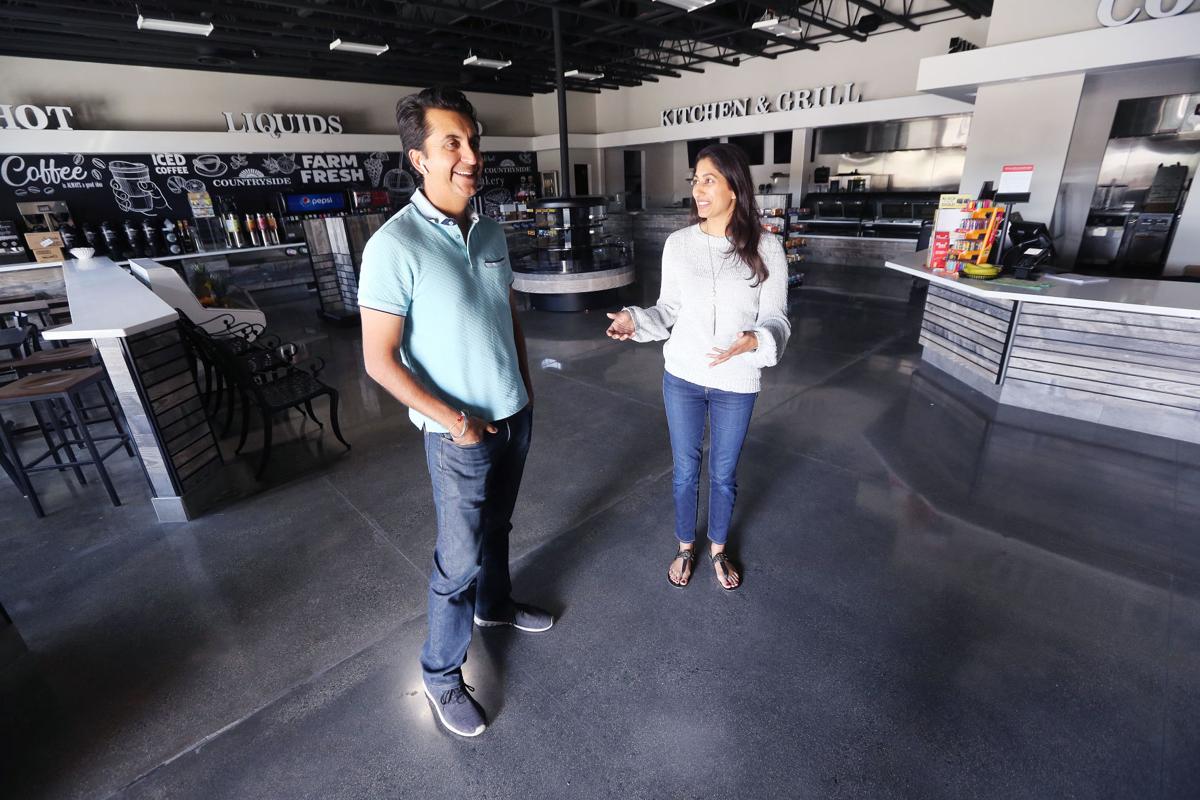 Owners of Countryside Market at the Village Rick and Neetu Jhaj talk about their misfortune at their Highway 178/Kern Canyon Road store Thursday afternoon. Rick, Neetu and several employees had to move all of their perishable items to their other store when the power went out around 10 a.m. The couple planned a soft opening Thursday. 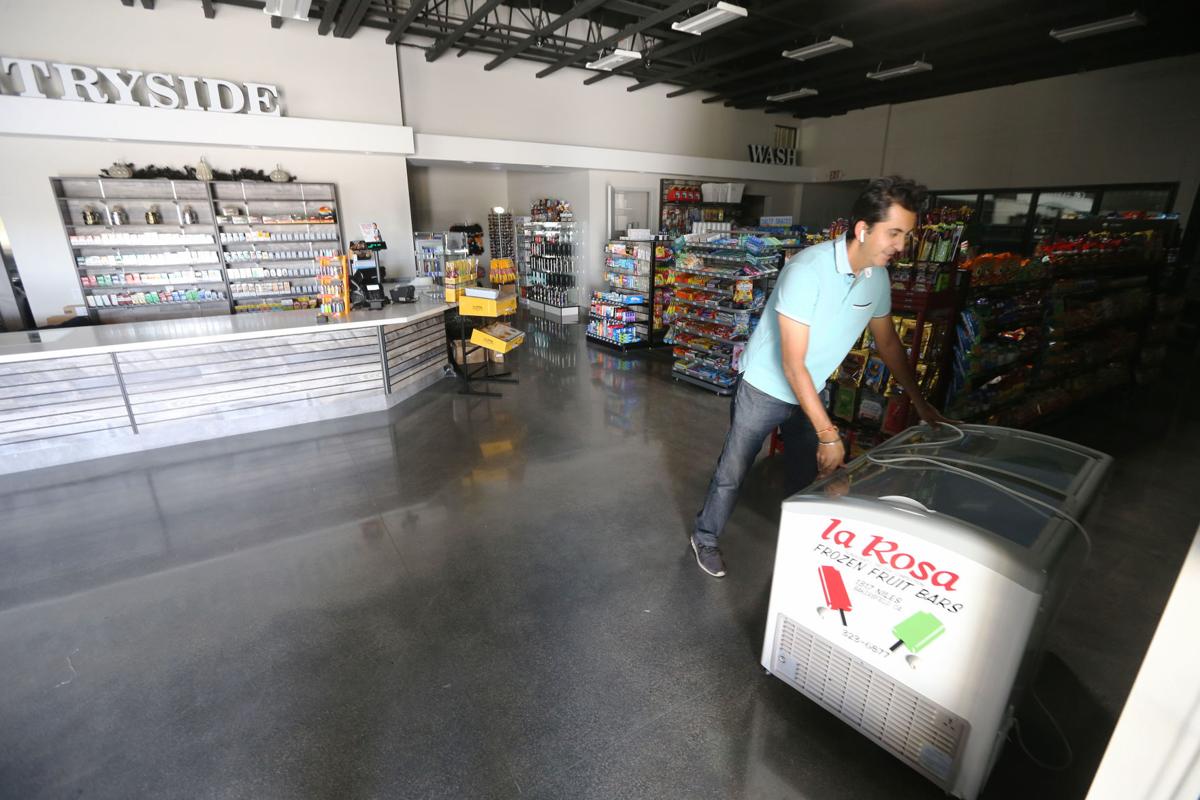 Rick Jhaj, owner of Countryside Market at the Village, moves a cooler in his store Thursday afternoon. Several store employees had to move all of their perishable items to their other store when the power went out around 10 a.m. 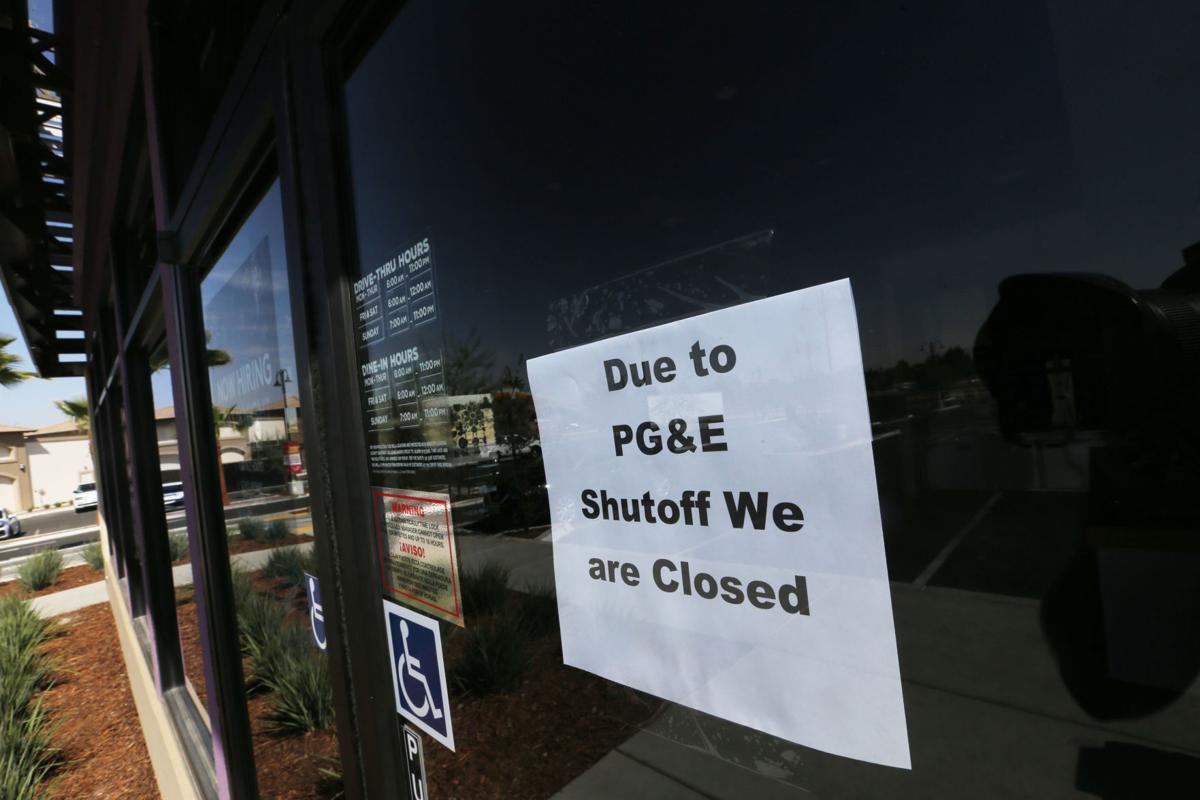 The Taco Bell off Highway 178/Kern Canyon Road was closed due to a PG&E power shutoff Thursday afternoon.

Owners of Countryside Market at the Village Rick and Neetu Jhaj talk about their misfortune at their Highway 178/Kern Canyon Road store Thursday afternoon. Rick, Neetu and several employees had to move all of their perishable items to their other store when the power went out around 10 a.m. The couple planned a soft opening Thursday.

Rick Jhaj, owner of Countryside Market at the Village, moves a cooler in his store Thursday afternoon. Several store employees had to move all of their perishable items to their other store when the power went out around 10 a.m.

The Taco Bell off Highway 178/Kern Canyon Road was closed due to a PG&E power shutoff Thursday afternoon.

Business owners Rick and Neetu Jhaj have been looking forward to the soft opening of their second Countryside Market and Restaurant location for about two years now.

On Highway 178 and Alfred Harrell Highway/Comanche Drive, Countryside includes a grill and kitchen station where customers can buy sandwiches, a Smith’s Bakery, their own coffee and other convenience store items for purchase. The family also owns the Shell gas station and Taco Bell next door.

“The community has been looking forward to us opening, especially the retirement community, they’ve been visiting us several times at the Taco Bell, and they’re excited to have fresh foods for breakfast, lunch and dinner,” Neetu Jhaj said.

But that momentous day would have to wait because at 10 a.m. Thursday the power went out as part of a Pacific Gas and Electric Company Public Safety Power Shutoff. Unlike other electric customers, they were not notified they would be part of the outage beforehand.

“We were told we were in the clear until at least noon, and abruptly at 10 a.m. we lost power and that was not expected,” Neetu Jhaj said. “At 10:30 a.m. I got a text saying the power would be turned off.”

What should have been a happy day for the family turned into a frenzy. They still had power at their other Countryside Market location four miles away, so they called employees to help move perishable items. Coolers that would have been filled with fresh fruit, ice cream and food items were empty by 1 p.m.

All that remained were turned off refrigerators filled with drinks, displays with snacks and two owners who had to turn eager customers away.

“All day we’re having to tell them we have no power,” Neetu Jhaj said. “We would have appreciated more advanced notice just to be able to plan around our opening date."

“If we were open, people without power could have come in and bought water and batteries and things they might need for their personal homes. That’s why we’re here,” Rick Jhaj added.

But, knowing the circumstances why shut-offs took place, "If it’s protecting homes and residences, we understand," Neetu Jhaj added.

The business owners were just part of an estimated 4,000 PG&E Kern County customers that were expected to lose power Thursday due to a wind event that poses the risk for critical fire weather conditions, according to Katie Allen, a local PG&E spokeswoman. A red flag warning issued by the National Weather Service for Lake Isabella, Tehachapi and Fort Tejon/Frazier Park areas is in effect until 5 p.m. Friday.

Originally an estimated 42,000 local customers could have been impacted by outages.

Affected residents will receive notifications when to expect their power to be restored. Allen said it could take 24 to 48 hours after the wind event has ended for power to return, possibly leaving customers without power for several days.

“We have the wind event ending mid-day on Friday, but wind and weather conditions can change,” Allen said. When it is safe to do so, PG&E will start patrolling and inspecting electric lines and begin restoring power.

Several residents of the Tuscany neighborhood in northeast Bakersfield went without power at approximately 10 a.m. Thursday, and their preparations for the possible several-day outage varied.

Gloria Dias has lived in her home for more than 10 years and says this is the first time she is experiencing an outage of this sort.

She felt prepared, though. Possibly looking at a few days without power, she said it was important to have batteries, extra food and water and flashlights handy.

"Hopefully it won't happen again," she said. "It's hard because you're not able to get all the information you want from (PG&E's) site." She added it would have been helpful if the company listed street areas that could be affected, rather than cities and zip codes.

Though the neighborhood was impacted, the closest traffic light at Miramonte Drive was working. At Alfred Harrell Highway/Comanche Drive — one light over — cars had to treat the intersection as a four-way stop.

Another Tuscany resident, Clint Stevenson, chose to take the outage one step at a time. He had flashlights and candles ready for the evening, but that's as far as he prepared.

"I go backpacking for two weeks at a time," he said, so if needed, he could make it without electricity for a few days. "If it was 110 degrees I'd be saying something else."

Stevenson felt PG&E communicated well with him in terms of when he could expect his power to go out. Though many people are not happy with the possibility of going without electricity for some time, he said, "This is a message to all of California that this is the new normal."

Many residents were not completely certain they were in the clear but decided to take proactive steps regardless. Tim Sexton said he was going to "fire up the generator" just in case power would be shut off in his neighborhood. He noted that better communication from PG&E was needed.

"California is a 'share the suffering' state," Sexton said.

An outage was also reported in the Rio Bravo area nearby.

Businesses are ready to help

Several businesses, though they were in impacted PSPS zones in Kern County, remained up and running Thursday, ready to service customers.

Robert Meszaros, director of communications for the Kern County Superintendent of Schools, said the California Living Museum and the office's other sites would not be impacted. There are generators available, however, if power does go out.

"We've used this as an exercise to learn and be prepared for when it does happen," Meszaros said.

Tony's Pizza off Highway 178 was one of the businesses in northeast Bakersfield to have power around noon and are anticipating several people to come in the next few days if outages continue. Owner Tony Martinez said the restaurant sees a large customer turnout Thursdays through Saturdays as is, so the power shut-off would just add to it.

"Recently a bird flew into a transformer and the power went out in the neighborhood and here," co-owner Toni Mamauag said. "People started showing up here, but we had to turn them away."

Two resource centers in Kern County have been opened for essentials such as restrooms, bottled water, electronic device charging stations and air-conditioned seating — the Buck Owens Crystal Palace at 2800 Buck Owens Blvd., and a community center located at 500 Cascade Place in Taft. Both centers will be open from 8 a.m. to 6 p.m. while the outage is in effect.

Also, PG&E has established an alternate website for customers to check their address for potential impact by a power shutoff. The website can be accessed at https://www.arcgis.com/apps/Cascade/index.html?appid=cb0658a472664835aa4defffc6d6868b.

New business opening during fire season, high winds, predicted 'paranoid' PG&E (remember Paradise) power outages . . . ! Certainly can understand the frustration. However, having lived off the grid for decades(gen's, solar & propane) . . . the message here is . . . BE PREPARED . . . !

Still have my new "in the bag" #2 generator stored ($500). Harbor Freight has had sales galore and 5K VAC (bypass to coolers only) is enuf to keep the doors open for minimal survival time (and oil lamps proliferate as 'romantic conversation pieces').

This is Bull squit! PG&E has had decades to "inspect" their equipment and make sure it is safe. They didn't do it before they caused the Camp Fire, and they haven't done it in the year since! And now, once again, ALL of CA. is having to pay for them shirking their responsibilities. What is this costing California's economy? Businesses having to close, schools shut down, hospitals running on emergency generators (what if THEY fail??) people losing hundreds of dollars of food in their freezers, traffic lights and city lights not working, looters??? And PG&E just covers their eyes and ears and mouths public safety apologies. Governor Newsom needs to tell them to own up to their incompetence and stop this nonsense!

California ? You mean the poor rural areas of Bakersfield.

Winds? In the 3 years here I have had more power outage than my entire life elsewhere.

Our local elected officials provide no protection ! Talk to them.