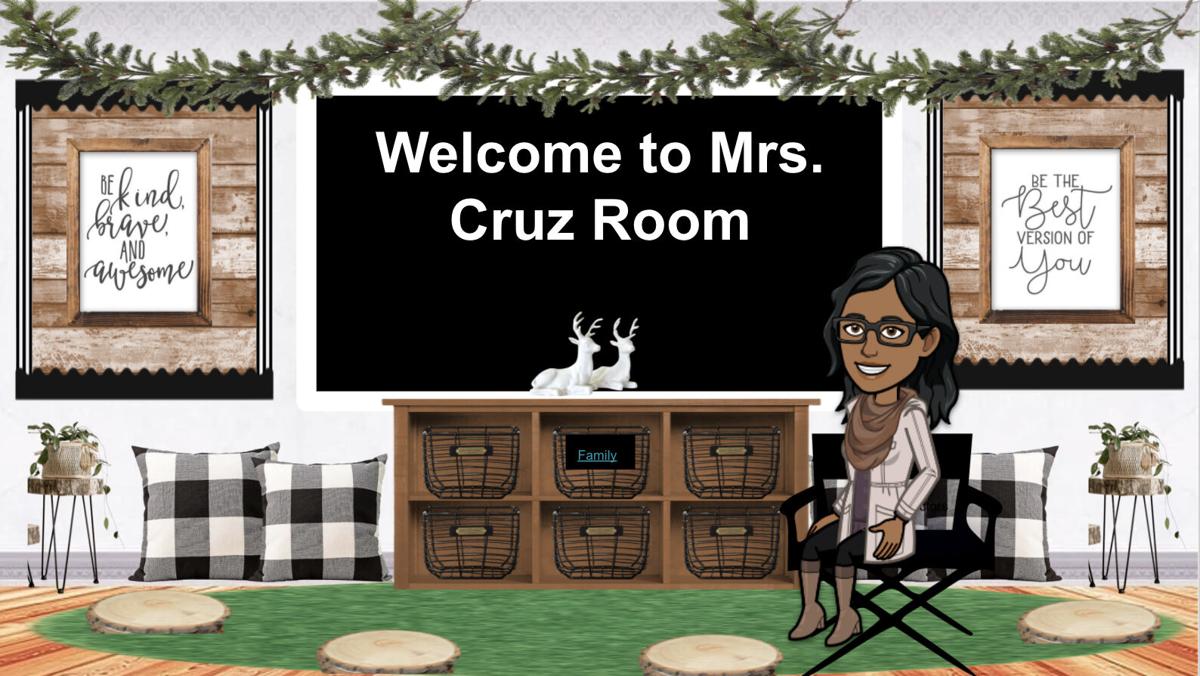 Domonique Cruz, a fifth-grade teacher at the new Martin Luther King Jr. Elementary School, has created a virtual classroom for her students this fall. 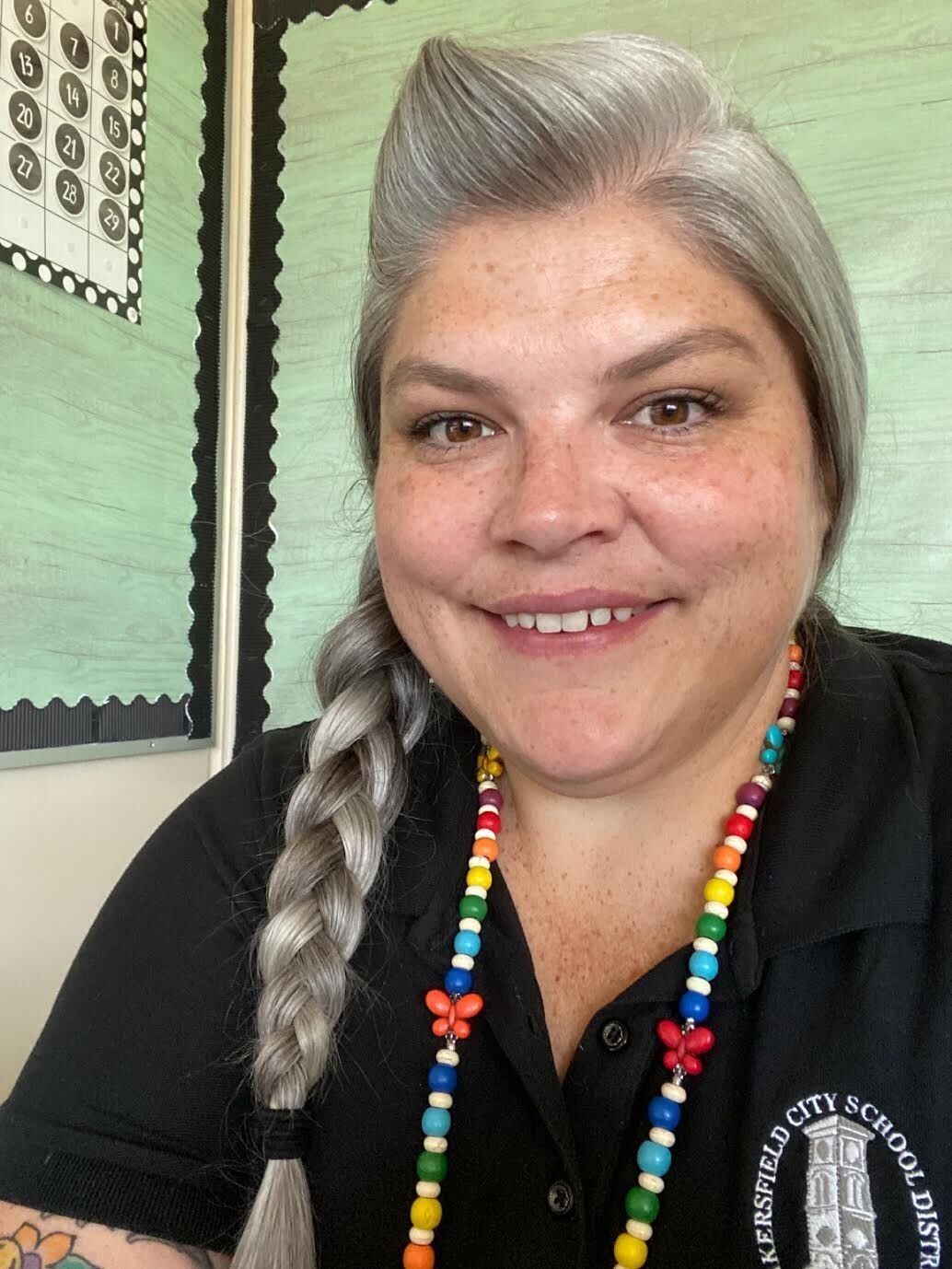 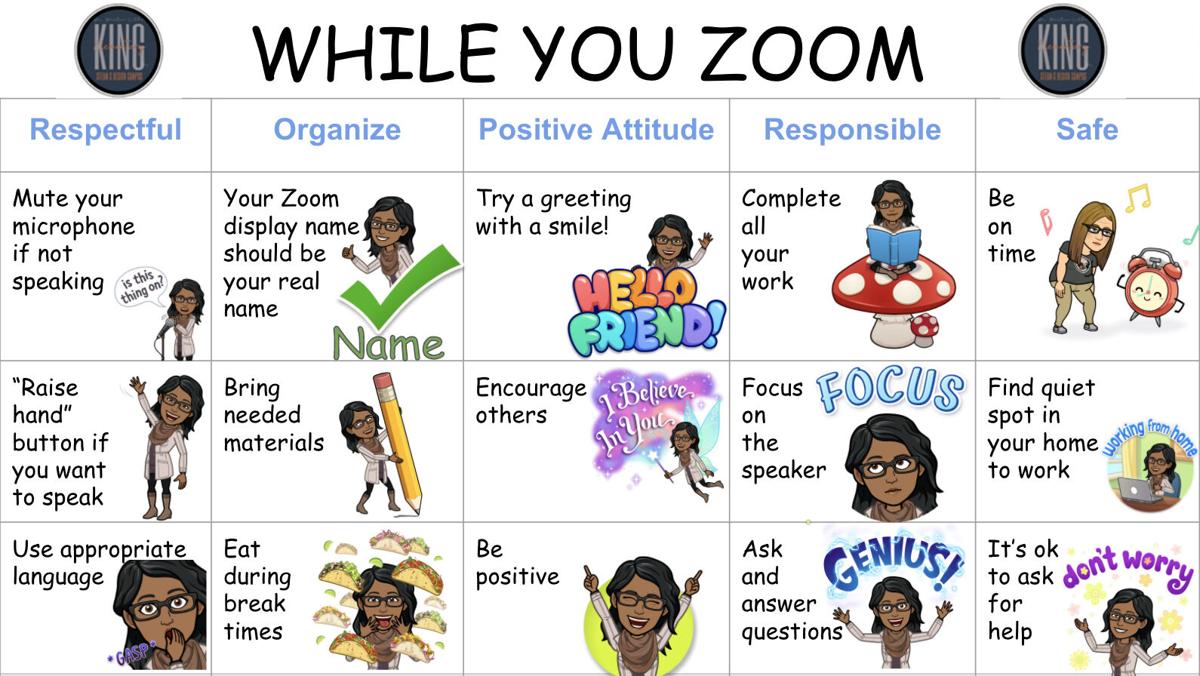 Domonique Cruz, a fifth-grade teacher at the new Martin Luther King Jr. Elementary School, has created a virtual classroom rules sheet for her students this fall. 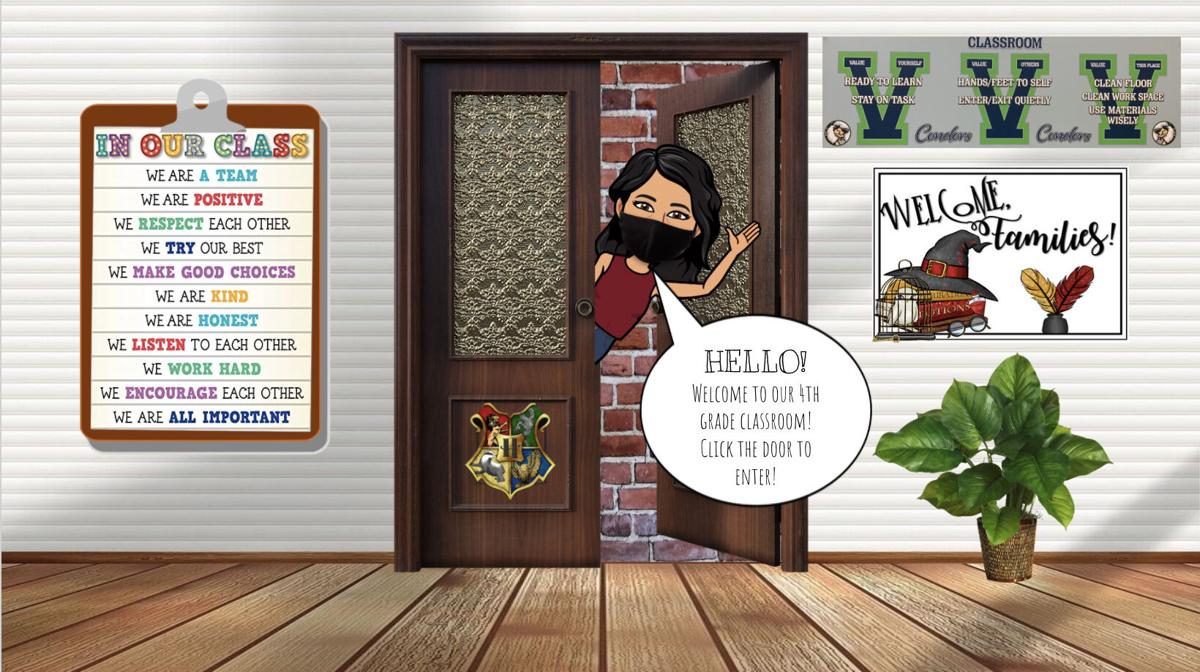 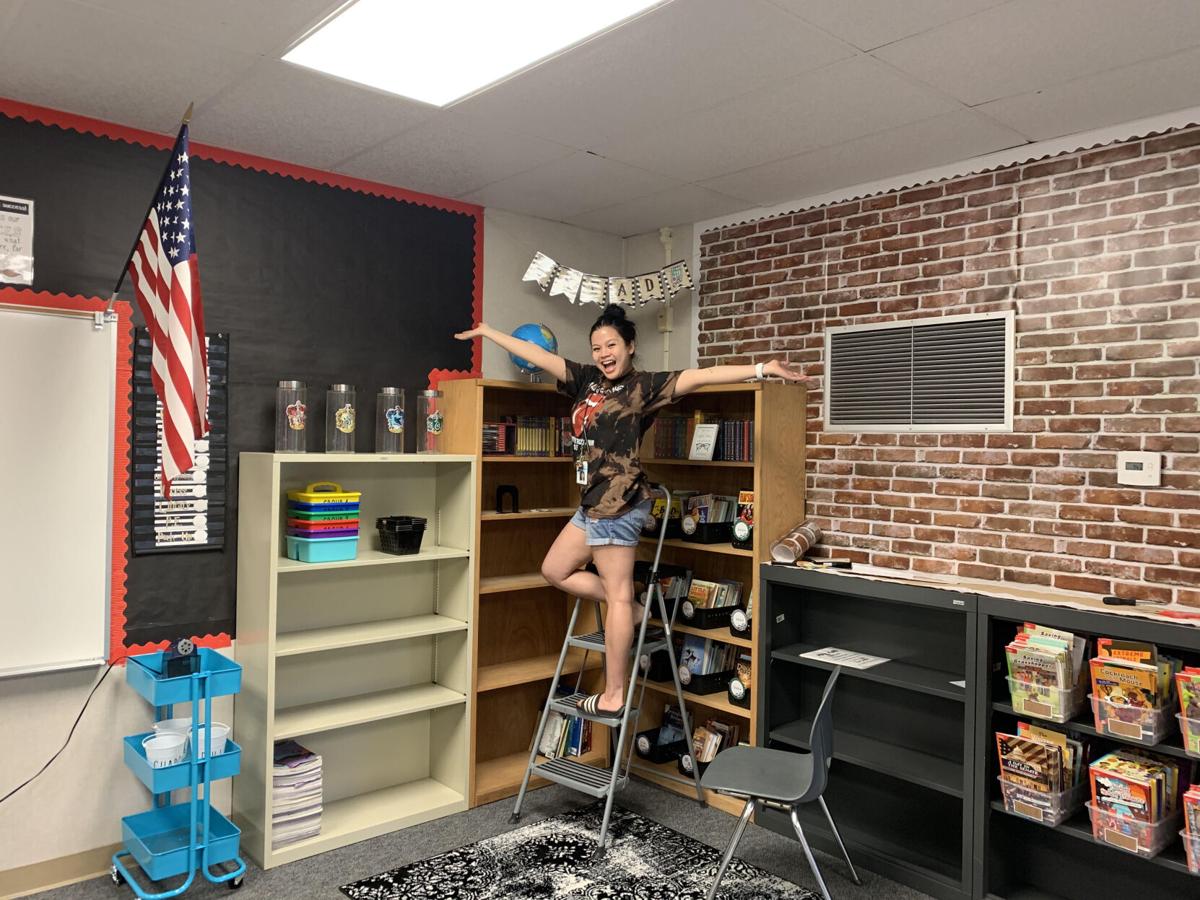 Domonique Cruz, a fifth-grade teacher at the new Martin Luther King Jr. Elementary School, has created a virtual classroom for her students this fall.

Domonique Cruz, a fifth-grade teacher at the new Martin Luther King Jr. Elementary School, has created a virtual classroom rules sheet for her students this fall.

Starting a new job anywhere is a stressful and daunting task, but first-year teachers might take the cake while launching their careers in an unfamiliar distance learning format this fall.

"I had no idea that this was going to be how my first year of teaching would begin," said fifth-grade teacher Shawn Rader. "Back in March, it still didn’t seem real."

Rader was taking the California Teaching Performance Assessment at the time of school closures in mid-March and had to quickly switch gears to complete the assessment online.

He and his Cal State Bakersfield classmates were finishing up the semester online as well.

"To go from a completely physical classroom to bounce ideas off each other, to move that to a digital model was very different," explained Allison Sweaney, an incoming fifth-grade teacher. "I had to up my internet connectivity at my house because I wasn’t able to have Zoom working well."

Domonique Cruz, who will be a fifth-grade teacher at the new Martin Luther King Jr. Elementary School, was in the middle of earning her student-teaching hours in a first-grade classroom when distance learning took over. As she worked with her mentor teacher, there were several questions and concerns that popped into their minds.

"It was new to everyone, so it was like I don’t know if i’m doing this right, is this enough? Are we giving them enough to do? Too much to do? Do they know what I’m asking them to do?" she recalled.

Now with the school year days or weeks away for various districts, new teachers, trained for in-person instruction, are trying to wrap their heads around how to launch careers in a way they never envisioned before.

The primary struggles most of them share are how they'll build relationships with students and how to effectively teach online.

Seeing students daily and being able to talk with them freely in classrooms allows for trust to typically develop quickly. Sweaney isn't completely sure how that will translate in a virtual environment.

"I need to show these kids I care about them, but I won’t know if they got that or not," Sweaney explained. "I don’t know the levels of their understanding of technology." If a student doesn't want to say out loud what's bothering them, Sweaney's concerned if they can express themselves by typing it out.

Having solid relationships also makes teaching students a bit easier, explained fourth-grade teacher Rose Dizon, and it's another component to distance learning that gives her slight pause. Because there's a lack of one-on-one time with each student, some might not engage as well with content as they could in a classroom setting.

In order to start building those connections, Sweaney said she's going to be giving families phone calls next week. She also wants to send her students written letters, telling them she cares and that she's looking forward to making the best of the situation, while giving them a bookmark as a gift.

Building lesson plans is another daunting task for newcomers, but many districts have provided a few weeks of content to help students and teachers adjust to distance learning.

"It’s very nerve-wracking, especially being in a new environment that we weren’t prepared for," Dizon said. "We were incorporating technology in our class, but we weren't prepared to teach solely virtually."

Although they're going into uncharted territory, most teachers are trying to remain positive. Because Rader will be working with fifth-graders, he feels a bit more confident knowing "they’ll have a better grasp on how to handle technology."

Dizon said the total digital plunge will let her explore different technologies so when students return to the classroom, she'll be able to incorporate them effectively.

And because Cruz will be a new teacher in a brand-new school, she feels a sense of relief that everyone around her will also be learning as they go. That could lead to more collaboration between teachers to make learning even better for students.

First-year teachers aren't the only ones worried about distance learning, however. Even Jill Summers, a veteran teacher of 20 years, is worried about keeping her kindergartners engaged and learning through screens.

The biggest pieces of advice she offers newcomers is that old-fashioned phone calls home are worth the time and effort, and to not be so hard on themselves since the first year of teaching is always the toughest.

"Your first year, you have to do your best. Take some notes, know what you did great and write down something that you can rethink to make it better," Summers said. "We all need to band together, give each other grace and communicate."

If the President would've jumped on this virus months earlier, we wouldn't be having this conversation...period. Remember, he said, "It's a hoax and it's going to just disappear..."

Poor nc, weren't you having an #impeachmentparty in Jan. and Feb. while POTUS banned flights from China? Weren't Pelosi and Deblasio urging their constituents to go out-n-about while POTUS banned flights from EU? Wasn't POTUS building ventilators while gov. Cuomo was forcing Covid-positive elderly INTO retirement homes in NY? Didn't POTUS instituted operation warp speed to deliver 300 million doses of a safe vaccine by Jan 2021 "as part of a broader strategy to accelerate the development, manufacturing and distribution of Covid-19 vaccines, therapeutics and diagnostics." www.hhs.gov

I think you should go back to teaching 2nd grade via zoom and pay your teacher union dues, comrade.

Who are you kidding? They can't "effectively teach online". How will the teacher know if a student is understanding the concept? Is the teacher going to be in front of the computer screen for 5-6 hours? How will they check to see if a math problem is done correctly? Is a parent going to stand/sit with a second grader to make sure they are paying attention? This is a disaster waiting to happen. All of these students will have lost about six months of education when this fiasco is finally over.

You have a lot of questions that you don't know the answer to then make very broad-stroked statements of what's going to happen. Teachers and students can make this work: we just have to do things differently. I will say the elementary students are going to be the ones that struggle the most, but that doesn't mean they will fail.

It didn't work in March - June, why should it work now? How will you know if they "fail"? !0-15% (your top students will do okay) the other 85-90% will not achieve anywhere close to what they would in a traditional classroom setting., students can't be directly monitored.