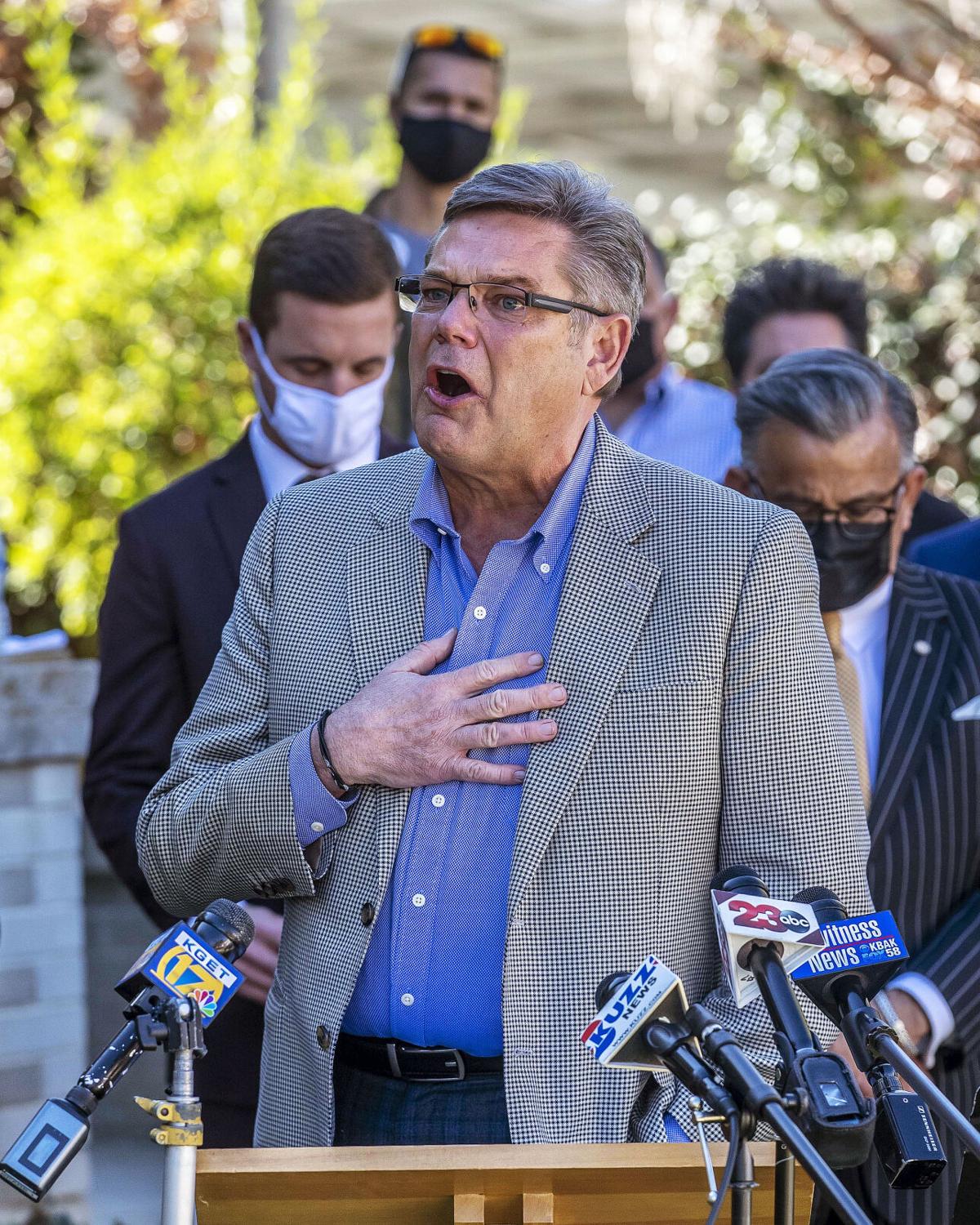 Monsignor Craig Harrison delivers an emotional address during a Thursday news conference at the law offices of Kyle J. Humphrey near downtown Bakersfield. 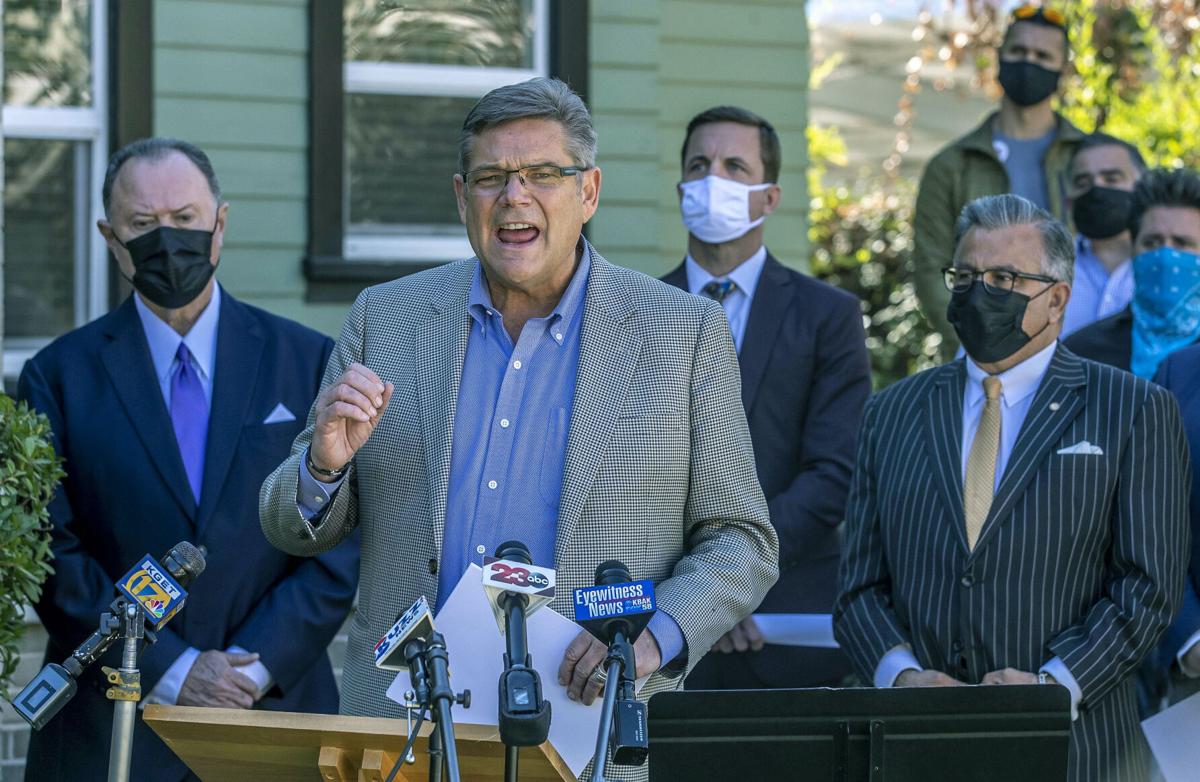 Monsignor Craig Harrison addresses the media during a Thursday news conference at the law offices of Kyle J. Humphrey near downtown Bakersfield. In the background are lawyers and supporters of the monsignor. 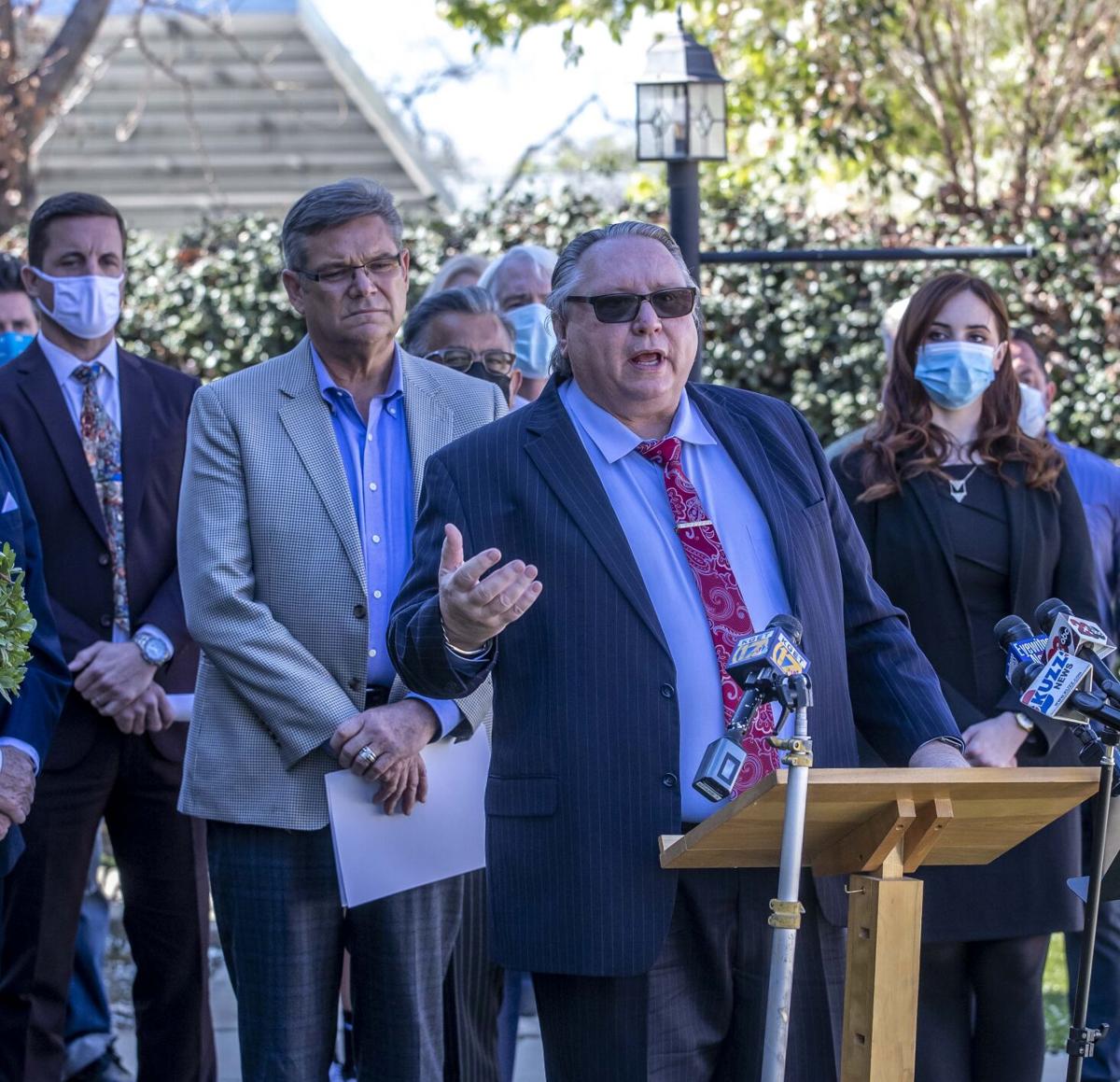 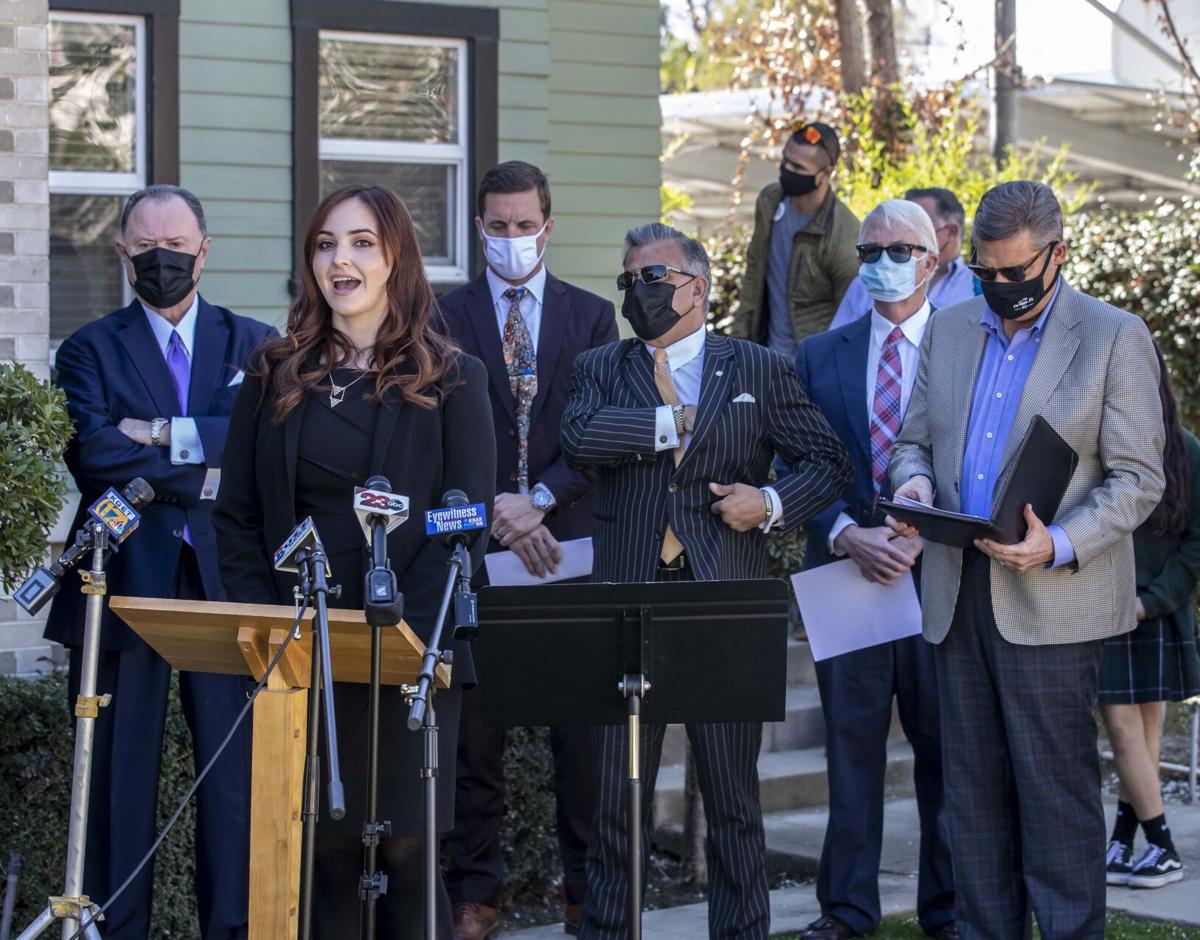 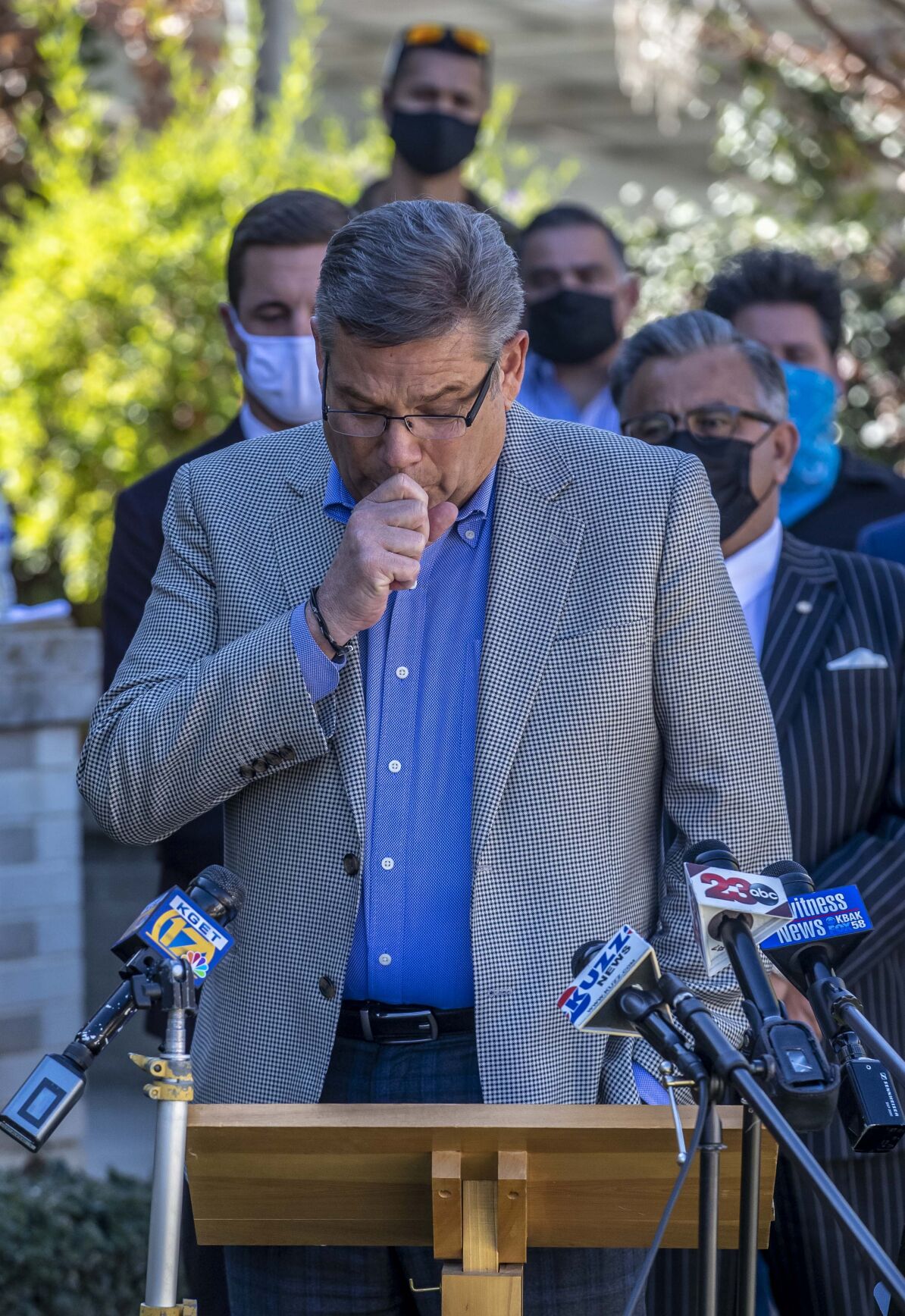 Monsignor Craig Harrison pauses to gather himself during a press conference on Thursday outside the law offices of Kyle J. Humphrey.

Monsignor Craig Harrison delivers an emotional address during a Thursday news conference at the law offices of Kyle J. Humphrey near downtown Bakersfield.

Monsignor Craig Harrison addresses the media during a Thursday news conference at the law offices of Kyle J. Humphrey near downtown Bakersfield. In the background are lawyers and supporters of the monsignor.

Monsignor Craig Harrison pauses to gather himself during a press conference on Thursday outside the law offices of Kyle J. Humphrey.

Monsignor Craig Harrison has announced his resignation from the Catholic Church, ending any possibility he could return as the pastor of St. Francis of Assisi Parish, a position he has held since 1999.

For nearly two years, Harrison has been on temporary administrative leave as church officials look into allegations of sexual impropriety and inappropriate behavior, which he denies. In an emotional news conference on Thursday, Harrison said he has never been given the opportunity to present any evidence in his support to church officials, and needed to cut ties with the church in order to perform Christian activities with members of the community and his friends.

“I cannot ignore my call from Christ to serve and minister to his people,” Harrison said during the news conference while surrounded by his attorneys and family. “I’ve come to accept that I cannot do this with any organization led by people who are willing to sacrifice the gospel for politics and money.”

Prior to his resignation, Harrison was facing sanctions from the Diocese of Fresno over a defamation lawsuit Harrison had filed against the church. The lawsuit was one of three Harrison has levied against accusers in what he described was his last resort to clear his name.

However, in a November letter to Harrison, Bishop Joseph Brennan warned that canon law proceedings could commence if the lawsuit against the church was not dropped. The suspended priest also faced sanctions for participating in religious activities like delivering a eulogy or posting religious messages on Facebook.

Harrison’s Attorney Kyle J. Humphrey said on Thursday that punishment for these activities could range from a simple verbal reprimand all the way up to excommunication.

“Ultimately that outcome is not what we’re concerned about,” he said. “The title of being a Catholic priest is not as important to the practice of faith as acting in faith and serving in faith. So those threats that we know the bishop would carry out in retaliation, we’re past that.”

The Diocese of Fresno did not immediately respond to requests for comment.

At Thursday's news conference, Harrison occasionally choked up, most noticeably when he claimed the Diocese of Fresno had never asked him a single question about the allegations against him in nearly two years. He said the ordeal had shaken him to his core, but he maintained that his faith has never been stronger.

While he said he does not know what he plans to do next, Harrison asserted he would continue to practice his faith.

“I’m trying to find out where God’s taking me,” he said. “He’s taken me through so much and I don’t know what he has planned, but I’m open. I just know that I’m going to continue in ministry.”

Aside from the Diocese of Fresno, Harrison has also sued Roman Catholic Faithful Inc., an Illinois-based group who shared letters and emails alleging Harrison committed sexual abuse while working at a Firebaugh church in the early 2000s. A third lawsuit has been filed against Ryan Dixon, who took the name Justin Gilligan when he became a monk. Dixon is a former Bakersfield resident and former friend who said he witnessed Harrison’s “inappropriate touching” from 2011 to 2016 when he was a part of Harrison’s inner circle.

All three lawsuits are still pending.

Harrison has been investigated by multiple law enforcement agencies, but no criminal charges have been filed. The Bakersfield Police Department could find no corroborating evidence proving the priest had touched anyone inappropriately. The Merced County District Attorney’s Office declined to file charges after investigating incidents from 1987 and 1988, saying the statute of limitations had expired. In a similar vein, the Fresno County District Attorney’s Office also declined to file charges due to the statute of limitations, but said in a news release the allegations, which originated from incidents they said happened in the 1990s, appeared credible.

Harrison has maintained his innocence from the beginning. On Thursday, his legal team reiterated the claim that the allegations were false.

“We want to go forward on the lawsuits,” Humphrey said. “Let’s put people under oath. We know it didn’t happen. We’ve always only asked for the opportunity from the bishop to hear us.”

The Catholic church has brought formal charges against Monsignor Craig Harrison, even before completing an investigation into allegations of s…